Note: Any network configuration created or modified with the ip command in this article is not persistent and disappears upon host reboot.

Here are the most common types of virtual network interfaces for Linux: TUN/TAP, bridge, veth, ipvlan/macvlan, vlan, and vxlan/geneve.

tun/tap are virtual network devices in the OS kernel, they provide data reception and transmission for user layer programs.

For a TUN/TAP virtual interface such as tun0, one end must be connected to the user layer program, while the other end varies depending on how it is configured, either directly to the kernel stack or to a bridge (described later). Linux provides tun/tap functionality through the kernel module TUN, which provides a device interface /dev/net/tun for user-level programs to read and write data from the host kernel stack through /dev/net/tun.

An example diagram of a TUN device is as follows.

Since one end of the TUN/TAP device is the kernel stack, obviously the packets flowing into tun0 are first matched by local routing rules.

After the routing match is successful and the packet is sent to tun0, tun0 discovers that the other end is connected to application B via /dev/net/tun and drops the data to application B.

After the application processes the packet, it may construct a new packet and send it out through the physical NIC. For example, a common VPN program encapsulates/encrypts the original packet and sends it to the VPN server.

Thereafter, the user program can interact with the host kernel stack (or other network devices) through this TUN/TAP virtual NIC. When the user-level program is closed, its registered TUN/TAP virtual NIC and the automatically generated routing table-related entries are released by the kernel.

The user layer program can be thought of as another host on the network that is connected via the tun/tap virtual NIC.

An example of a simple C program that simply prints the number of bytes received each time it receives data is as follows.

Next, open three terminal windows to test the above program by running the above tun program, tcpdump and iproute2 commands.

First, run the above c program by compiling it, which blocks and waits for the data to arrive.

Now use iproute2 to view the lower link layer devices.

Now start a third window to send some data to tun0 and keep watching the previous tcpdump and mytun logs:

The following is the output of mytun.

and the output of tcpdump.

For a more complex tun program, you can refer to

Difference between TUN and TAP

The difference between TUN and TAP is that they work at different network levels. User programs can only read and write network layer IP packets through TUN devices, while TAP devices support reading and writing link layer packets (usually Ethernet packets with Ethernet headers).

The relationship between TUN and TAP is similar to that between socket and raw socket.

The most common scenario where TUN/TAP is used is as a VPN proxy, for example:

A veth interface always comes in pairs, and a pair of veth interfaces is like a network cable, where data coming in from one end goes out the other.

The Linux Bridge is a network switch that works at the link layer, provided by the Linux kernel module brige, and is responsible for forwarding link layer packets between all interfaces connected to it.

Devices added to the Bridge are set to accept only Layer 2 data frames and forward all incoming packets to the Bridge. The Bridge performs a processing logic similar to that of a physical switch by checking the MAC port mapping table, forwarding, and updating the MAC port mapping table so that packets can be forwarded to another interface/dropped/broadcasted/sent to the upper stack, thus enabling the Bridge to perform data forwarding functions.

Unlike a physical switch, the Bridge itself can have an IP address set, and it can be assumed that when a new br0 bridge is created using brctl addbr br0, a hidden br0 network interface with the same name is automatically created. Once the IP address of br0 is set, it means that this hidden br0 interface can participate in routing at the IP layer as a routing interface device (you can use route -n to see the last column of Iface). Therefore the Bridge can only send packets to the upper stack if br0 sets the IP address.

However, the NICs that are added to the Bridge cannot be configured with IP addresses, they work at the data link layer and are not visible to the routing system.

It is often used for forwarding data between different namepsaces on virtual machines, hosts.

Taking qemu-kvm as an example, in the bridge mode of a VM, qemu-kvm creates a tun/tap virtual NIC for each VM and connects it to the br0 bridge. The internal network interface eth0 is emulated by the qemu-kvm software, and the network data sent and received within the virtual machine is actually converted by qemu-kvm into reads and writes to /dev/net/tun.

Take sending data as an example, the whole process is as follows.

The whole process runs without the packets going through the host’s stack, which is highly efficient.

The structure of the container network is similar to that of the virtual machine, but it uses a NAT network instead, and replaces tun/tap with veth, so that the data coming from docker0 has to go through the host stack first before entering the veth interface.

The schematic is as follows.

As you can see in the container via iproute2, the interface type of eth0 is veth.

You can also see in the host that the corresponding veth device is bound to the docker0 bridge.

Note that macvlan and WiFi have compatibility issues, and you may have trouble if you use a laptop to test.

macvlan is a relatively new Linux feature that requires kernel version >= 3.9. It is used to configure multiple virtual sub-interfaces on the host’s network interface (parent interface), each of which has its own independent mac address and can also be paired with an ip address for communication.

The virtual machines or container networks under macvlan are in the same network segment as the host and share the same broadcast domain. macvlan is more similar to bridge, but because it eliminates the bridge, it is easier and more efficient to configure and debug. In addition, macvlan itself supports VLANs perfectly.

If you want containers or virtual machines to be placed in the same network as the host and enjoy the advantages of an already existing network stack, consider macvlan.

Because of the shared mac address, if you use DHCP, you should be careful not to use the mac address for DHCP and need to configure an additional unique clientID.

Consider using ipvlan if you encounter the following situation.

vlan, or virtual LAN, is a link-layer broadcast domain isolation technology that can be used to slice and dice LANs to solve broadcast flooding and security problems. The isolated broadcast domains need to go up to layer 3 to complete the communication between them.

Ethernet packets have a dedicated field for vlan use. The vlan packet records its VLAN ID in this location, and the switch uses this ID to distinguish between different VLANs and only broadcasts the Ethernet message to the VLAN corresponding to that ID.

Before introducing vxlan, let’s explain the meaning of the following two terms.

Both vxlan and geneve are overlay network protocols, and both use UDP packets to encapsulate Ethernet frames at the link layer.

vxlan was standardized in 2014, while geneve passed the draft stage at the end of 2020 and is not yet a final standard. However, geneve is currently supported by linux/cilium.

The biggest change in geneve compared to vxlan is that it is more flexible - its header length is variable. 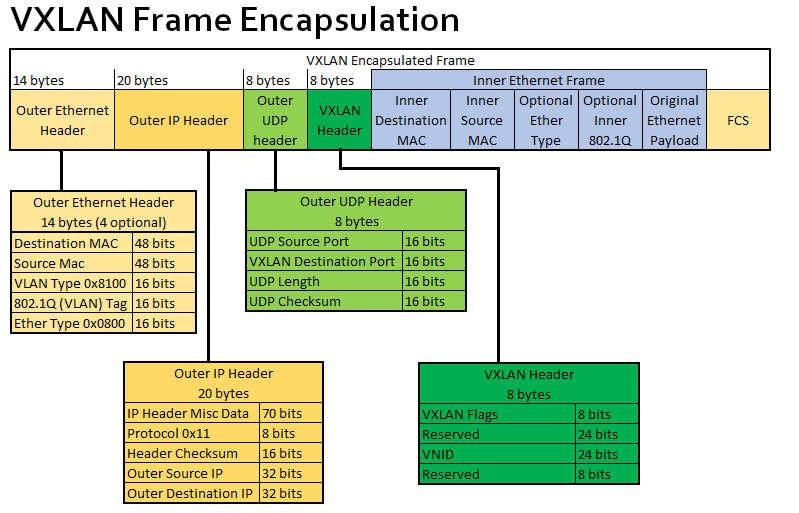 When creating a vtep virtual device for vxlan, we need to manually set the following attributes in the diagram.

A point-to-point vxlan network architecture is shown below: 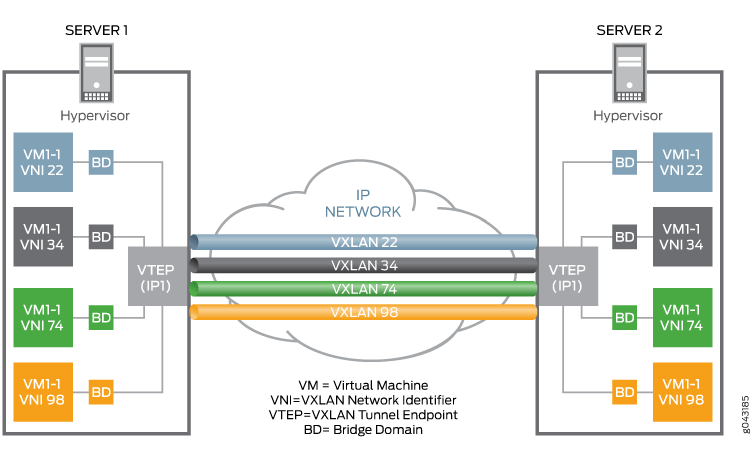 You can see that each VM VM is assigned a unique VNID, and then a VXLAN tunnel is established between the two physical machines via the VTEP virtual network device, and all VMs in the VXLAN network communicate with each other via VTEP.

With the above knowledge, we can establish a point-to-point VXLAN tunnel between two Linux machines with the following command.

Point-to-point vxlan tunnels are not very useful in practice, and it would be too expensive for every node in the cluster to build vxlan tunnels with each other.

A better approach is to use “multicast mode” vxlan tunnels, where a vtep can tunnel with all the vteps in the group at once. The example command is as follows (information on how to set the multicast address 239.1.1.1 is omitted here)

As you can see, it is simply a matter of replacing local_ip/remote_ip with a multicast address. The multicast feature will send the received packets to all vtep interfaces in the group, but only the vtep with the right VNID will process the packet, the other vtep will just discard the data.

Next, to allow all VMs/containers to communicate via vtep, we add a bridge network that acts as a switch between the vtep and the containers. The architecture is as follows. 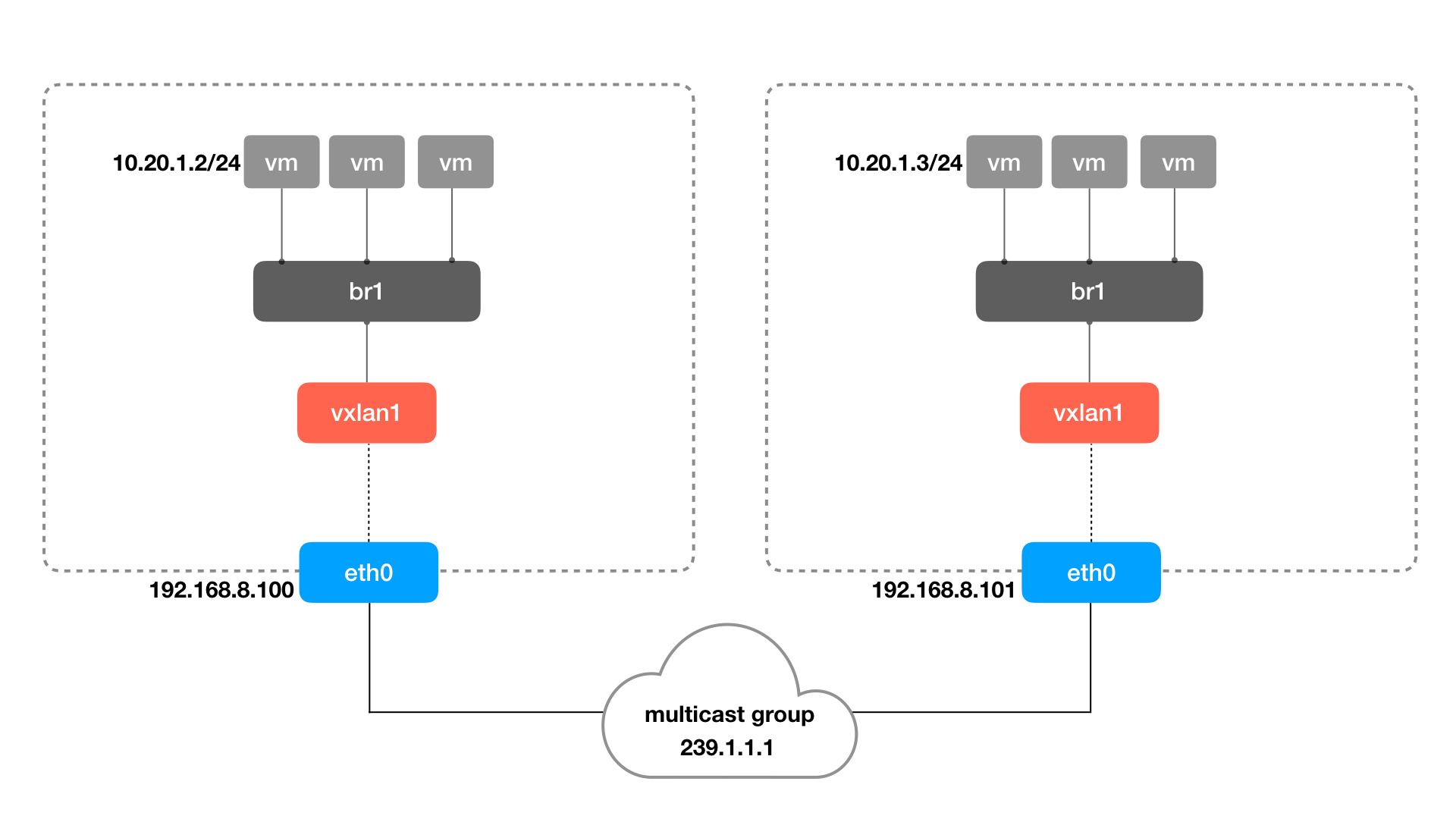 Use the ip command to create a bridge, network namespace, and veth pairs to form the container network in the above figure.

Then do the same on the other machine and create a new container, and the two containers can communicate via vxlan.

The biggest problem with multicast is that it doesn’t know the destination of the data, so each vtep sends a copy. If each time data is sent, if it can be precise to the corresponding vtep, it can save a lot of resources.

Another problem is that ARP queries are also multicast, knowing that vxlan itself is an overlay network and the cost of ARP is high.

All the above problems can be solved by a centralized registry (such as etcd), where all the registrations and changes of containers and networks are written to this registry, and then the program automatically maintains the tunnels, fdb tables and ARP tables between vtep.

Loopback, like the other virtual network interfaces mentioned in this chapter, is a software emulation of a network device. Is their rate also like the physical link, there is a link layer (such as Ethernet) bandwidth limit?

Many older network devices, for example, are currently only supported up to 100 megabit Ethernet, which determines its bandwidth limit. Even newer devices basically only support up to Gigabit, which is the 1GbE Ethernet standard, so does the virtual network interface mentioned in this article also have this constraint when communicating purely within the local machine? Does it only run up to 1GbE?

Use ethtool to check.

The next practical test is to give the machine parameters first.

Run iperf3-server in the container and test again.

In general, the interfaces loopback, bridge, and veth are basically not speed-limited. veth has a cap of 10000Mb/s (10Gb/s), which feels like a false number, and the actual measured data is basically between 35Gb/s and 55Gb/s, depending on the situation.

The variation in performance is related to the link and type of virtual network device, and perhaps to the difference in default configuration.

In addition, the TUN device is not measured here, and the value of ethtool tun0 is an outrageous 10Mb/s, but it feels unlikely that it is so slow, so we can test it again when we have time.