After the author of Faker.js emptied the project’s repository code, another software author has been disappointed that companies have used his open source project without giving anything back. on January 11, Christofer Dutz, creator of Apache PLC4X, posted on GitHub, stating that he will stop providing free community support to corporate users of PLC4X due to the lack of any form of return. If no company is willing to step forward to fund the project, he will cease maintenance and any form of support for PLC4X. 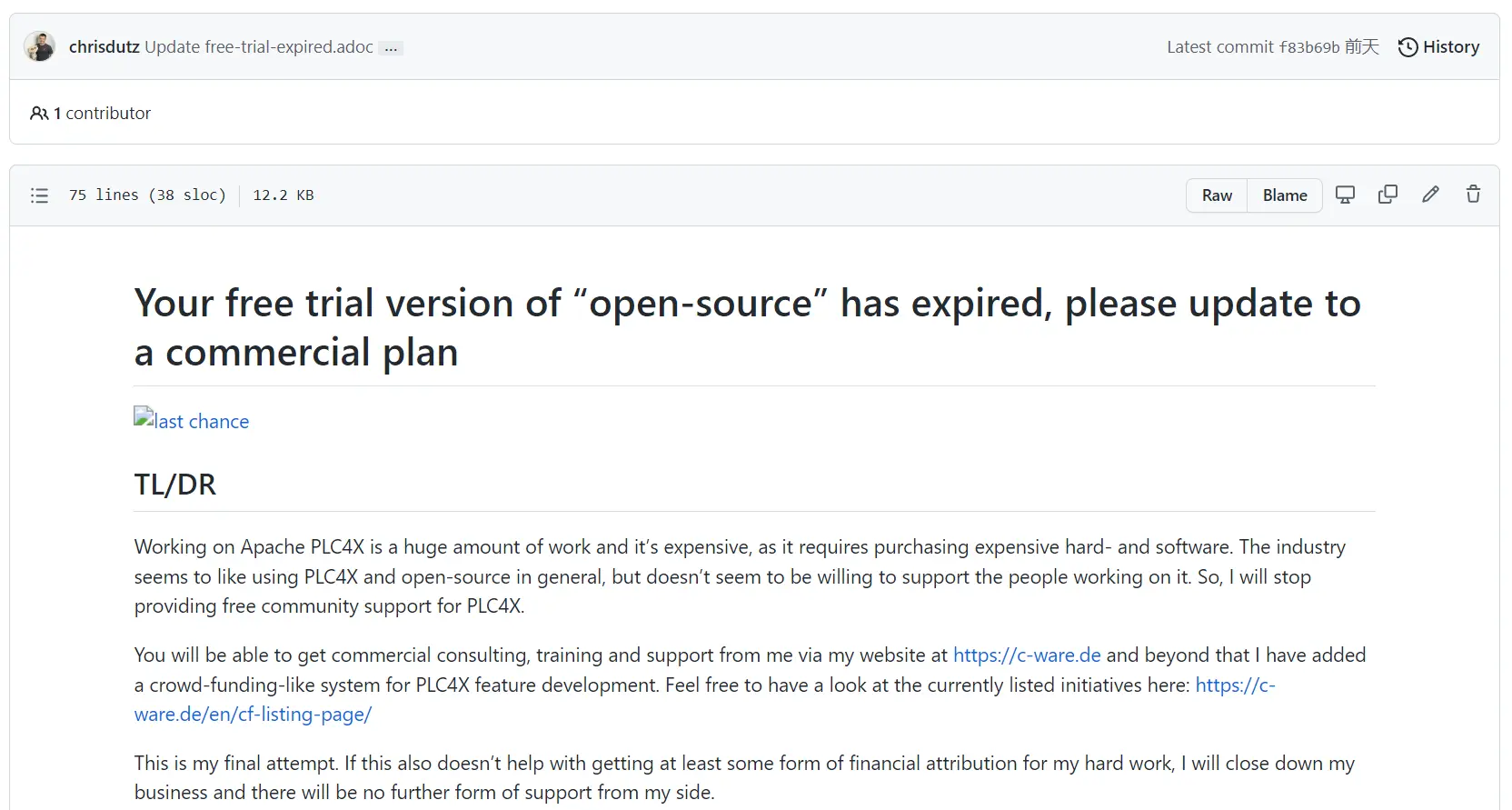 Apache PLC4X is a library for integrating PLCs (Programmable Logic Controllers). Most industrial programmable logic controllers (PLCs) use a large number of incompatible protocols for communication, making interaction with the outside world (IT/Internet) difficult.

The PLC4X project aims to provide a unified set of APIs through which drivers can be implemented that can communicate with most PLCs (via the various PLC native communication protocols).

Not quite the same as a pure software project, because PLC4X involves the Internet of Things and sophisticated automation hardware, Christofer had to purchase some expensive hardware and software to test and maintain the PLC4X project, which put him in a dire financial situation. Christofer therefore registered an independent IT consultancy called c-ware to help other companies design and implement PLC4X software-related businesses. However, the company was not doing well, and the emails he received often looked like this.

“Thank you for this great PLC4X. it makes our lives so much easier, I am in the largest {steel mill} / {aerospace company} / {automotive manufacturer} in our country and now the business is having …. Such a problem and I hope you can help a little.”

(You’re open source software, right? So can you help me?)

The company’s financial position was positive in 020, with some institutional funding and the development and maintenance of PLC4X remaining on track. But as the epidemic backfired in 2021, the only sponsorship available was withdrawn and Christofer received only one paid talk for the whole of 2021. By 2022, Christofer was starting to get fed up with not being able to make ends meet: “I didn’t want to waste my precious free time on something that would consume me and give me nothing in return.”

So he set up a new development plan for PLC4X: no more buying hardware at his own expense to develop new drivers or integrated modules, no porting PLC4X/drivers to new languages and absolutely no free consulting, training and support for companies. He will provide commercial technical support and training if the company requires it.

In addition, Christofer has set up a crowdfunding project for each of the new PLC4X features that the company’s users often ask “when they will be available”, and will only start developing the corresponding feature if they have raised enough money. 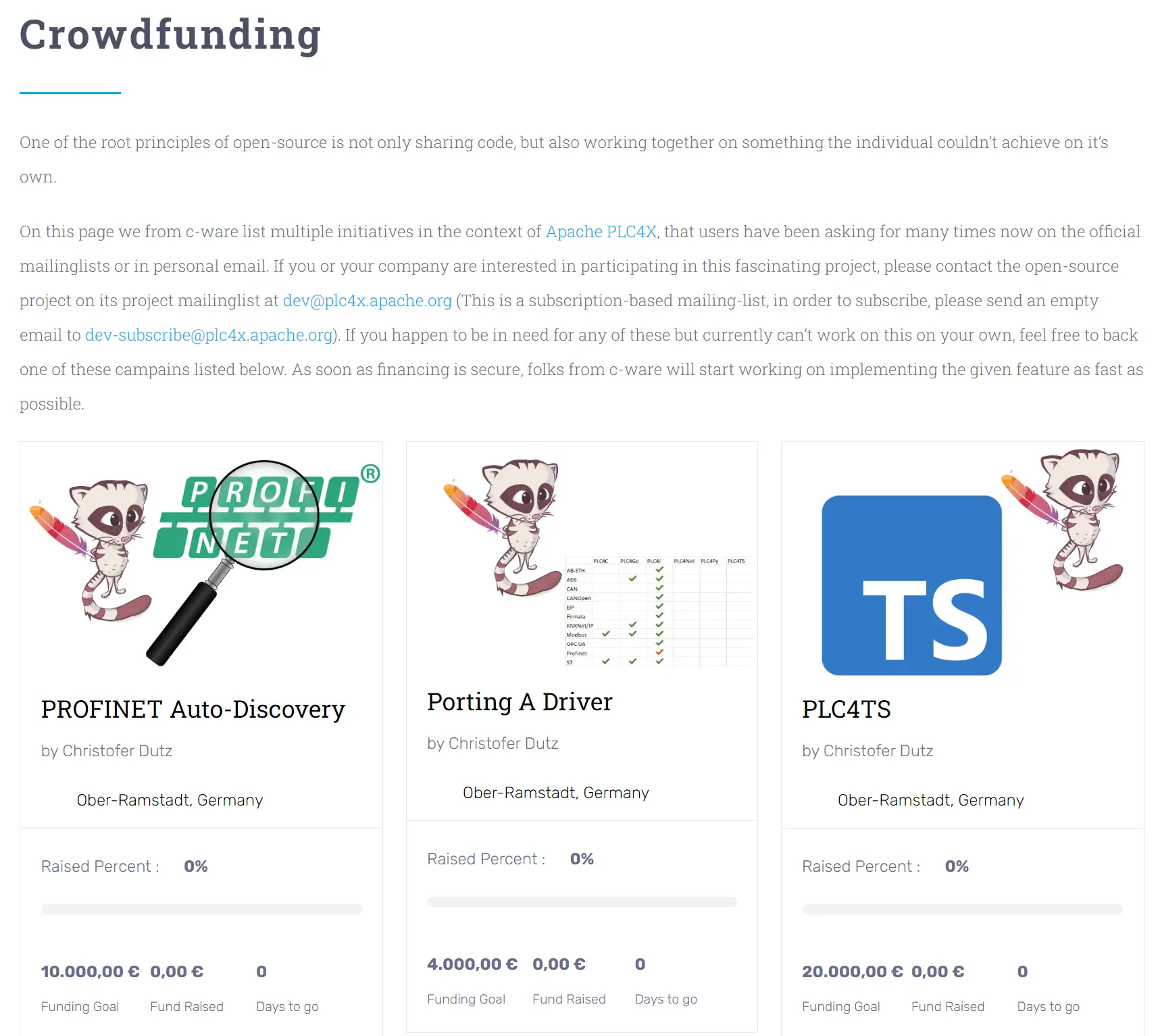 And this crowdfunding is the last attempt, if the corresponding funds are not raised in 2022, he will no longer develop and maintain the Apache PLC4X project and will not provide any form of support.

If the industry doesn’t support the people behind open source, I can stop blindly supporting them for free, at least from now on.

As of the finalisation of this article, the crowdfunding results for PLC4X are as follows.