Linux provides a series of system calls that allow us to pass file descriptors between processes. Instead of simply passing the file descriptor, which is a 32-bit integer, we actually pass the file handle to the target process so that it can read and write to the file. Now suppose process B wants to send a file descriptor to process A. Let’s see how to do that.

To pass file descriptors, you need to establish inter-process communication. UNIX domain socket is a way to communicate between processes, it is similar to a normal socket, except that it does not use an ip address, but a socket file. We want to use it to send control messages and thus pass file descriptors. First we will have process A create a socket:

Note the arguments to the socket function. AF_UNIX specifies the protocol family as a UNIX domain socket. Here we use the datagram socket SOCK_DGRAM , which is similar to UDP and does not require a link to be established, but is sent directly through the address. Of course, you can also use SOCK_STREAM, which is similar to TCP. We won’t list them here.

Next we bind the address:

Note that the address here is no longer an ip address, but a file path. Here we specify the address as process_a, and call bind to bind the address, which creates a socket file called process_a.

Let’s look at the declarations of these two system calls

sendmsg and recvmsg use a structure struct msghdr to describe the data sent. The structure is defined as follows: 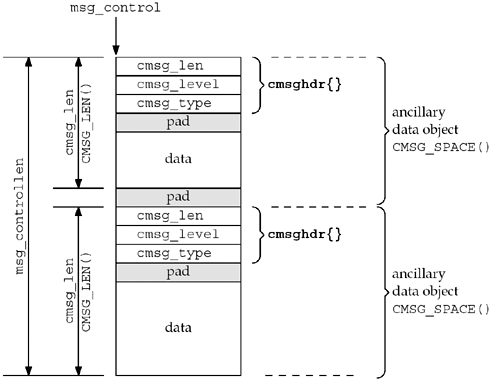 We need to use the following macros:

Next, let’s have process B pass a file descriptor to process A. First set the address of process A, which is “process_a”:

We only need to send control messages, not regular data, so we leave the regular data empty:

Next, we allocate space for the control data, since we only pass one file descriptor, so the length is sizeof(int) :

Then you can set the struct msghdr structure:

Next we get struct cmsghdr and set it:

Finally, just send it out:

Now we ask process A to receive the file descriptor passed to it. Here we call recvmsg .

Thus, process A receives the file descriptor from process B, and process B opens the file and can perform read and write operations on it.