In this article I want to discuss Promise in JavaScript and Deferred in Python Twisted (Deferred is also available in jQuery, and the idea is the same). They’re interesting, and a bit complicated. They played an important role in web programming before concurrency was widely used. Before that, let’s take a look at some basic concepts.

2. Starting with the request

When we do network programming, we always use request and response . For example, if process A needs to pass some data to process B, we can say that process A sent a request to process B. Sometimes a request is sent and we don’t care about the rest; but more often, we care about the result of the processing of the data by the target process, and we want to process the result further. In this case, we can ask the target process to send a request to the source process and pass the result to the source process after it has received the sent data and processed it accordingly. We call this behavior a response.

It is not enough to have a request and a response. Consider the following scenario: 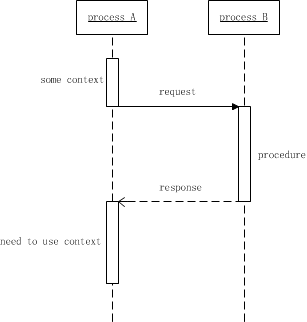 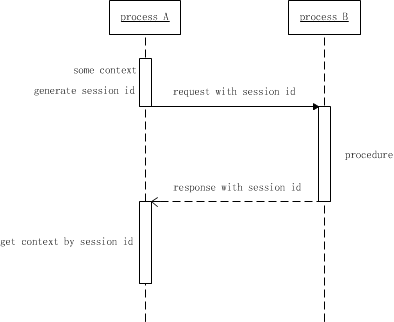 With a session, we can easily send requests and responses. For example, we can send a request and receive a response like this:

The target process can then receive the request and return the response:

However, there are often some inconveniences in using callback functions in this way. What if you need to send a request to another process in the request handler and get the return value and then respond?

We cannot return res to on_receive_message as the return value of request_handler, and we cannot pass the response of the request. To solve this problem, we can make some changes:

However, this is still not very convenient, especially when multiple calls are involved, and the callback function needs to be passed through the parameters. Also, in many cases, a remote call may not always succeed, and we want to be able to handle exceptions when errors occur. So in addition to callbacks, it is common to pass in a function called an exception callback to specifically handle exceptions. If both callbacks and exception callbacks are passed in layers, this makes the code difficult to maintain and the methods containing the remote calls difficult to encapsulate into a common library.

Let’s look at the basic usage:

We can call the then method of a Promise object multiple times to set multiple callbacks. These callbacks form a chain of callbacks, and the return value of the previous function becomes the argument of the next function:

The idea is the same, think of a Promise object as an unfinished task, and pass the result of the task when it completes by calling a callback function.

The above example uses Promise in this way:

where Promise.resolve automatically determines if an object is a Promise object, and if it is, it waits for it to be ready before calling it back, or if it is not, it calls it back directly. 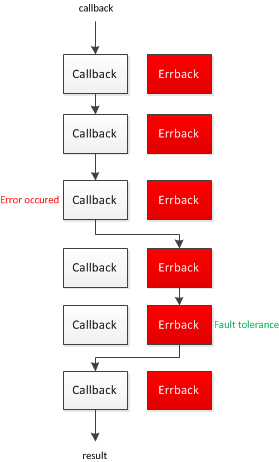 I was first introduced to Deferred using Python’s twisted library. Deferred is actually available in jQuery, and they are practically the same. The essence and core idea of Deferred is the same as Promise, but with a different presentation.

Deferred’s callback chain and nested Deferred are the same as Promise, so here’s an example of the same:

As an example, here I have used Deferred to implement send_request and on_receive_message above.

Deferred’s exception handling is basically the same as Promise, so I won’t go into it here. See the documentation for details.

I first came across Deferred when I was using Python twisted. At the time, I was using Python2, and there was no concurrency. It’s not as convenient as a concurrent process, but it solves the problem of repeated callbacks in server programming and improves maintainability of the code. Later, I came across Promise when I was using js, and found that they were similar. Of course, as technology evolves, these will slowly be replaced by concurrent processes. However, it is worth learning from their clever design ideas.