I have previously learnt that some of my operations and maintenance colleagues have experienced a decrease in performance after scaling a Redis cluster with a relatively large number of nodes, as evidenced by a significant increase in access latency.

To find the root cause of this problem, we troubleshoot the cluster performance degradation after a particular Redis cluster migration operation.

The business side perceives that the latency to access the Redis cluster becomes high.

1.2 Description of the current network environment

Because the latency becomes high, we troubleshoot in several ways.

By simple monitoring and troubleshooting, the bandwidth load is not high. However, the CPU was found to be behaving abnormally. 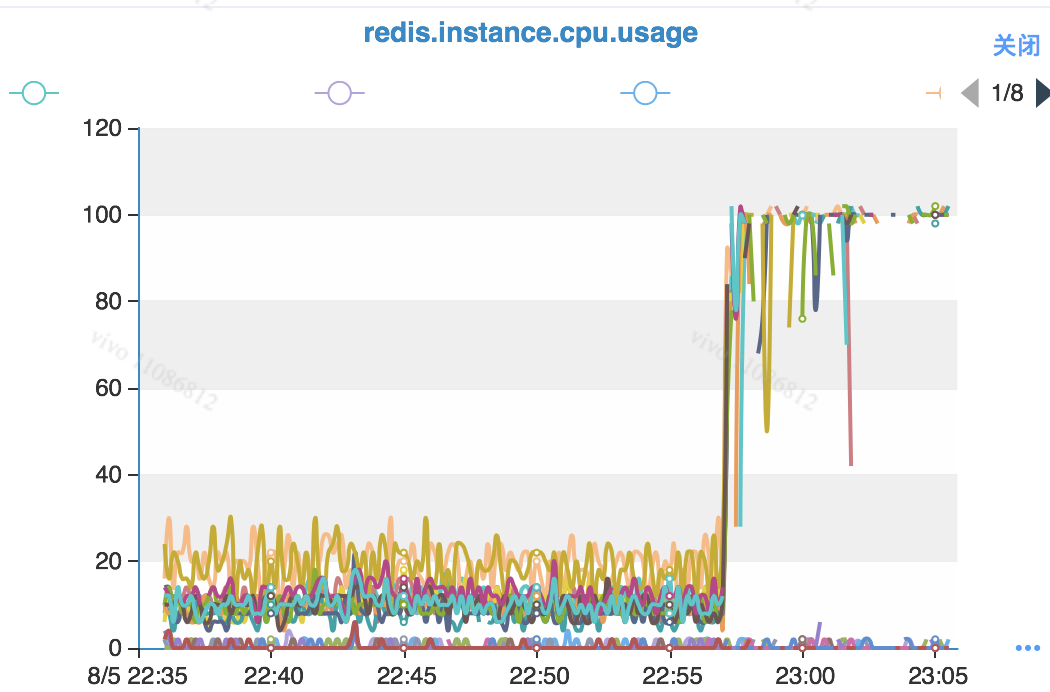 Looking at the MGET and CPU load used by the business feedback, we found the corresponding monitoring curves.

Analyzed in terms of time, there is no direct correlation between high MGET and CPU load. The feedback from the business side was a general increase in latency for MGET. Here we see that the OPS and CPU load of MGET are staggered.

Here it can be tentatively determined that there is no direct relationship between business requests and CPU load for the time being, but it can be seen from the curves: there is a staggering of business requests and CPU load on the same timeline, and there should be an indirect relationship between the two.

As a colleague on the operations side has previously had feedback that the cluster has undergone expansion operations, there is bound to be a migration of slots.

Considering that business clients generally use caches to store slot topology information for Redis clusters, it was suspected that there was some connection between the Cluster directive and CPU load.

We found that there was indeed some connection. Here it is obvious: the CPU usage of a certain instance rises significantly when executing Cluster instructions.

Based on the above phenomena, a simple focus can be roughly made on.

Also, to elicit a few issues of concern.

Why are clusters with large node sizes prone to “hitting” the migration slots?

Why is it easy to “get caught” in a cluster migration slot operation with large node sizes?

We performed a simple analysis using perf top on a Redis instance that appeared to have a high CPU load on site.

As you can see from the above diagram, the function (ClusterReplyMultiBulkSlots) takes up 51.84% of the CPU resources, which is an exception.

We analyse the clusterReplyMultiBulkSlots function.

Each node (ClusterNode) uses a bitmap (char slots[CLUSTER_SLOTS/8]) to store information about the allocation of slots.

Since it is important to determine whether the bit at the pos position is a 1, therefore.

Therefore the slot 10001 corresponds to the byte with subscript 1250, and the bit to be checked is the subscript 1.

The corresponding position on the ClusterNode->slots. 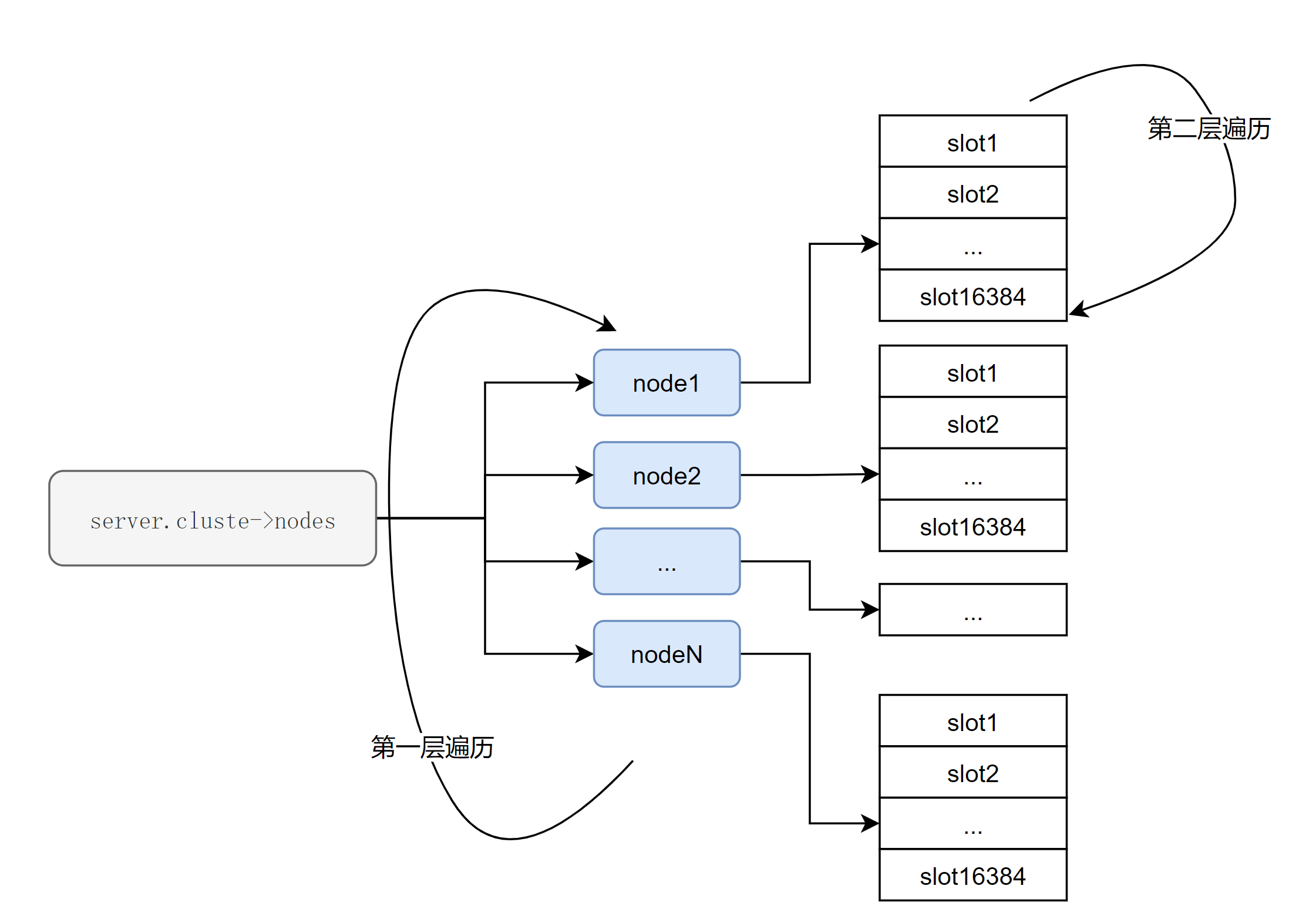 The approximate steps are as follows.

We understand that the operation and maintenance students have expansion operations, and after the expansion is completed, some keys are bound to have MOVED errors when they are accessed.

To see the process of calling Cluster_update_route.

Here the cluster_update_route_by_addr performs a CLUSTER SLOT operation. As can be seen, when a MOVED error is fetched, Hiredis-vip re-updates the Redis cluster topology with the following characteristics.

A brief glance at the Jedis client code shows that renewSlotCache is called if there is a MOVED error.

Continuing to look at the renewSlotCache call, we can confirm that Jedis sends the Redis command CLUSTER SLOTS when it encounters a MOVED error in cluster mode, which pulls the Redis cluster’s slot topology again.

The process for sorting out MOVED in client-side cluster mode is roughly as follows. 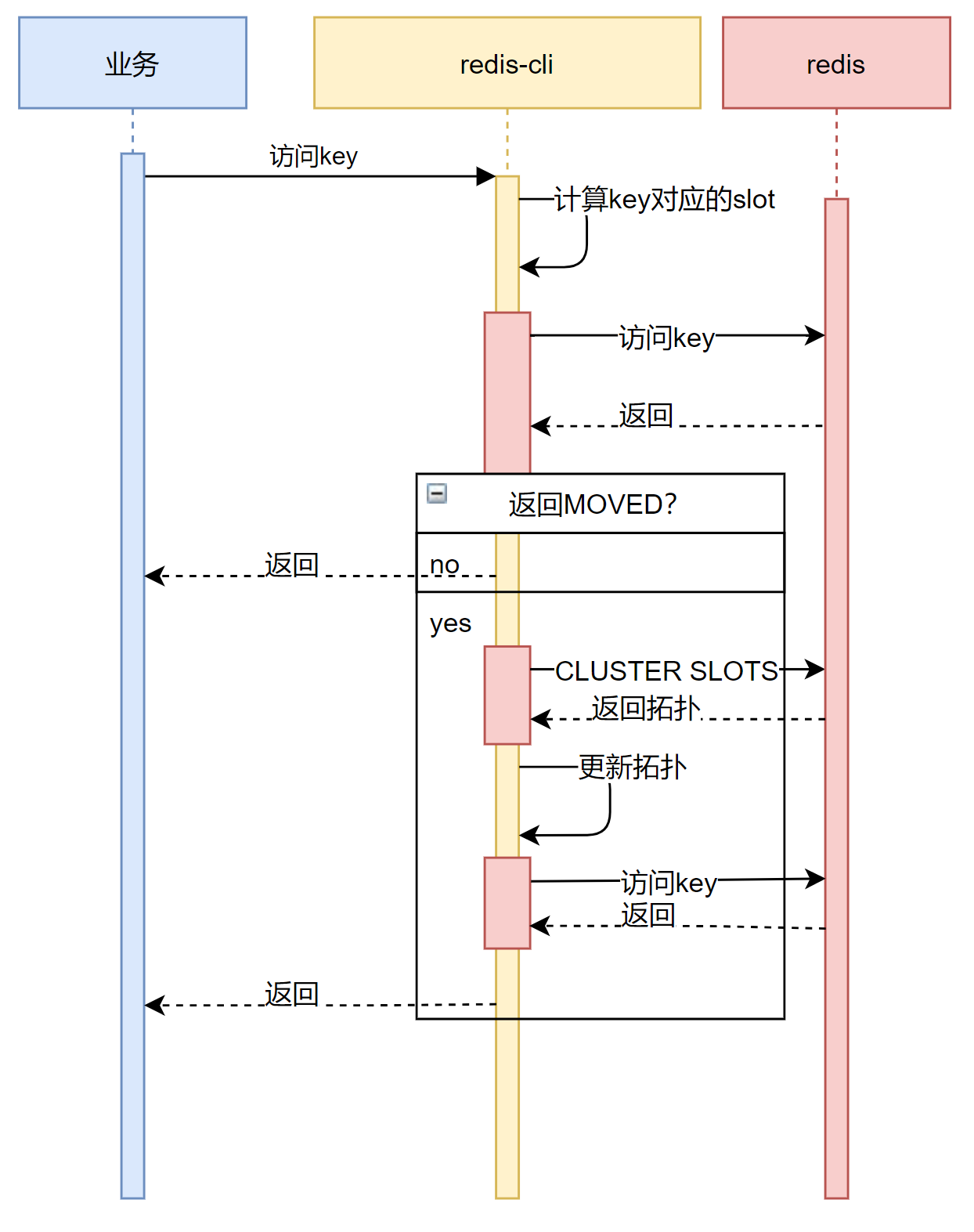 Here, combined with the Redis-side CLUSTER SLOTS mechanism and the client-side processing logic for MOVED, several questions can be answered.

Because a migration operation has occurred, the business accessing some of the migrated keys will get a MOVED return, and the client will pull the slot topology information again for that return and perform CLUSTER SLOTS.

Why is it easy to “hit” a cluster with a large node size to migrate a slot operation?

According to the current situation, it is a normal process for a client to encounter MOVED for CLUSTER SLOTS execution, as the cluster’s slot topology needs to be updated to improve the efficiency of subsequent cluster accesses.

In addition to Jedis and Hiredis-vip, other clients should also perform similar sloot information caching optimizations. There is not much room for optimization of this process, as the cluster access mechanism of Redis dictates.

The cluster information logging for Redis is therefore analysed.

Each Redis node in the cluster has some cluster metadata records, recorded in server.cluster, which are as follows.

As described in 2.1, the original logic obtained the topology by traversing the slot information of each node.

A simple optimisation idea is as follows.

Therefore, it is sufficient to iterate over server.cluster->slots to satisfy the requirement. A simple representation would look like this.

This reduces the time complexity to <total number of slots>.

The optimisation logic is as follows.

A side-by-side comparison of the CLUSTER SLOTS command between the two versions of Redis.

It is clear to see that the optimised share has dropped significantly. This is largely as expected.

Tests were carried out on, with embedded time consuming test code on.

This is a significant drop in time consumption: from 2000+us to 200-us; the time consumption in a cluster of 100 master nodes is reduced to 8.2% of the original; the optimization results are basically as expected.

Here it is possible to briefly describe the above actions of the article leading to such a conclusion: a performance defect.

To briefly summarize the above troubleshooting and optimization process.

From the above troubleshooting and optimization process, it can be concluded that the current Redis has a performance flaw in the CLUSTER SLOT instruction.

Because of Redis’ data slicing mechanism, the key access method in Redis cluster mode is to cache the topology of the slots. The only place to start is with CLUSTER SLOTS. The number of nodes in a Redis cluster is generally not as large, and the problem is not as obvious.

In fact, the logic of Hiredis-vip is also somewhat problematic. As mentioned in 2.2.1, Hiredis-vip’s method of updating the slot topology is to traverse all the nodes one by one to perform CLUSTER SLOTS, which can have a knock-on effect if the Redis cluster is large and the business-side clients are large.

In conjunction with point 3 above, imagine that there are 1w clients accessing the Redis cluster. Because there is a migration operation for a key with a high hit rate, all the clients need to update the slot topology. Since all clients have the same cluster node information cached, the order of traversal is the same across all nodes. Redis nodes are accessed by most of the clients (e.g. 9k+ clients) in order of traversal. Executing the CLUSTER SLOTS command causes Redis nodes to block one by one.

The end result is that after a large scale Redis cluster undergoes a slot migration operation, the business side perception is that common command latency becomes high and the Redis instance CPU resource usage is high under large scale Hiredis-vip client access. This logic can be optimised to some extent.

The optimizations in subsection 3 above have now been committed and merged into Redis version 6.2.2.