The abstract syntax tree is an intermediate product of the compilation process, and is generally just a simple thing to understand. But we can take the whole parser and ast package from Go and use it directly, which can be very powerful in some scenarios.

What is ast? I took an excerpt from Wikipedia.

At its core, it means that ast can represent the code structure in the form of a tree. With a tree structure, you can do traversals of it and can do a lot of things.

Assume a scenario: we can get various characteristics of the driver from an interface of the driver platform, such as: age, number of orders, income, daily driving hours, driving age, average speed, the number of complaints …… data is generally delivered using json.

Driver platform operations often need to engage in some activities, such as the election of.

These rules are not fixed and change often, but they are always a combination of driver characteristics.

For simplicity, we pick 2 characteristics and represent them in a Driver structure.

In order to cooperate with the operation of activities, we need to determine whether a driver meets the requirements according to the rules given by the operation.

If the company has a lot of people, you can arrange a rd dedicated to serve the operations lady, every time you do activities to manually modify the code, it is not impossible. And actually quite simple, let’s write a sample code.

Looking directly at the main function: getDriverRemote simulates getting a driver’s feature data from a third-party RPC, represented as a json. Then json.Unmarshal to deserialize the Driver structure. Finally, the isOldDriver function is called to determine if the driver matches the rules of the operation.

isOldDriver uses an if statement to determine if the driver is an old driver based on the 2 fields of the Driver structure.

But each time I update the rules, I have to go through a complete online process, which is also quite troublesome. Is there a simpler way? So that we can directly parse a string rule given to us by the operations team, and directly return a bool value to indicate whether the condition is met.

Next is the heart of this article, how to use ast to do the same.

Intuitively understand how to parse rules with ast

Using some of the functions provided by the ast package, we can very easily string a rule as follows. 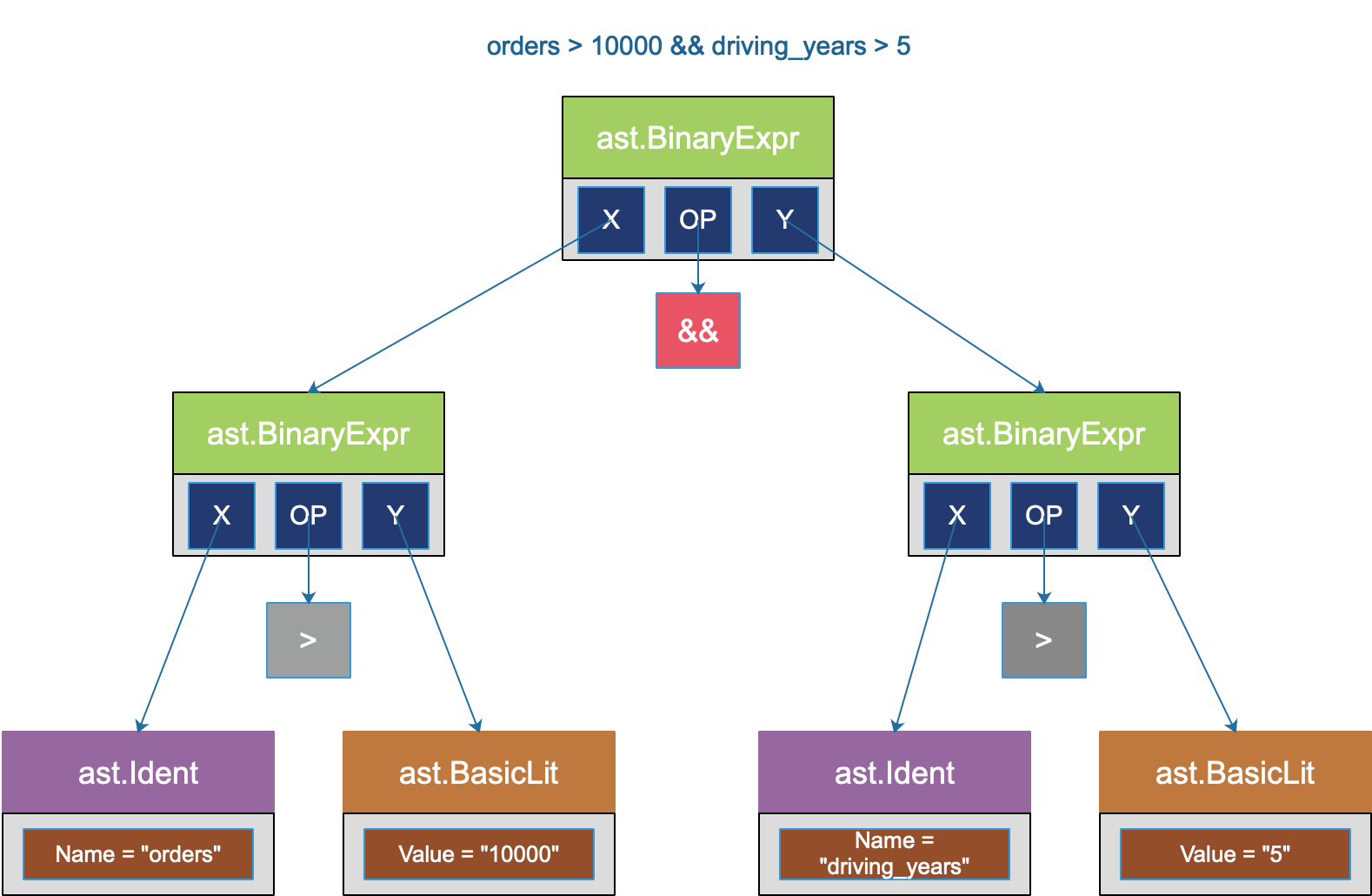 BinaryExprrepresents a binary expression, which consists of three parts, X and Y, and the symbol OP. The top one,BinaryExpr`, represents the left and right halves of the rule together.

Obviously, the left half is: orders > 10000 and the right half is: driving_years > 5. Miraculously, both the left and right halves happen to be binary expressions again.

The left half of orders > 10000 is actually also the smallest leaf node, which can be calculated as a bool value. After splitting it up, it can be divided into X, Y, and OP; X is orders, OP is “>”, and Y is “10000”. Where X denotes an identifier and is of type ast.Ident, Y denotes a literal of a basic type, e.g. int, string type …… is of type ast.BasicLit.

The right half of driving_years > 18 can also be split up as such.

At this point, directly based on the rule string, we can calculate the result.

If written as a program, it is a traversal process of dfs. If it is not a leaf node, then it is a binary expression node, which must have X, Y, and OP parts. Recursively traverse X. If X is a leaf node, then end the recursion and compute the value of X. ……

Here is another abstract syntax tree printed out with the ast package. 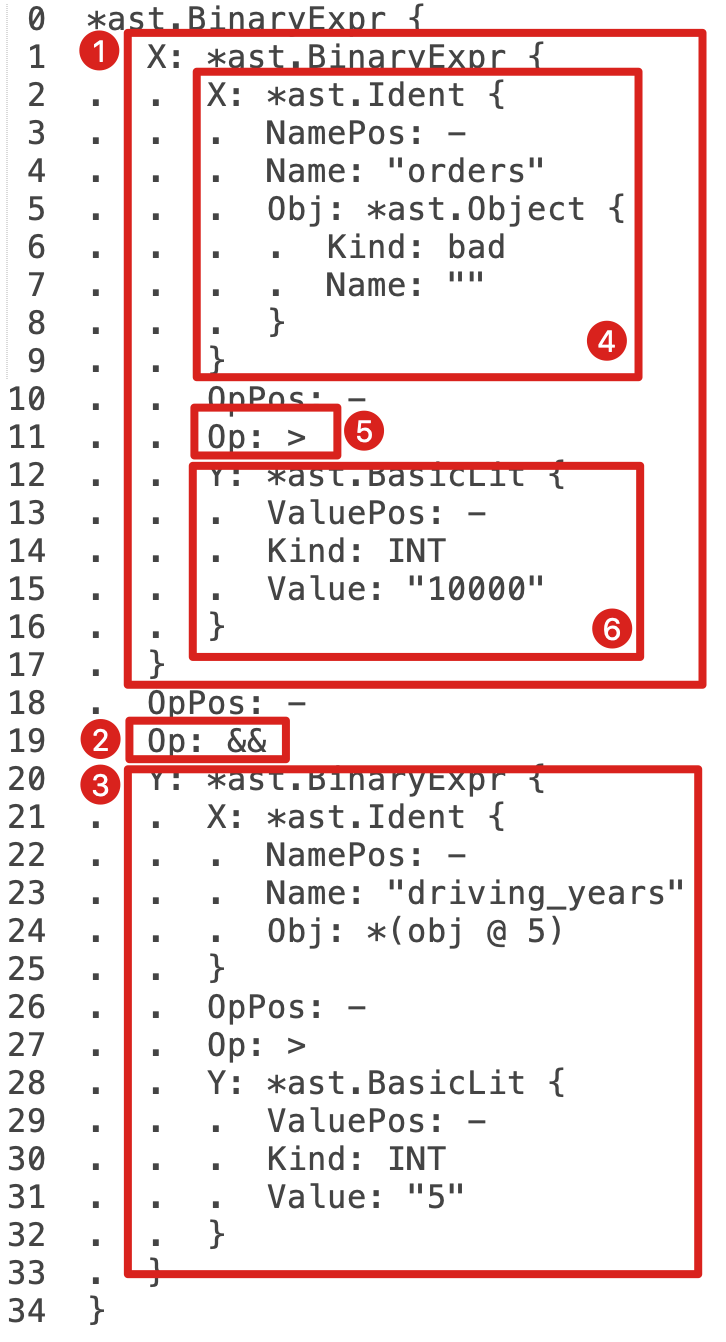 Combining this diagram with the code of the relevant structure of the ast package, it is very clear. For example, the code of ast.BinaryExpr is as follows.

It has X, Y, OP, and even resolves the position of the Op, which is represented by OpPos.

If you are still interested in the implementation, then continue to the schematic analysis section below, otherwise you can skip directly to the concluding summary section.

Using the same example as above, let’s write a direct expression.

Next, ast is used to parse the rules and determine whether they are true or false.

For simplicity, we use map directly instead of json, for the same reason, just for convenience.

The Eval function determines whether rule is true or false.

The expression is first parsed into Expr, and then the judge function is called to compute the result.

judge computes the value of an expression recursively using dfs.

The recursive termination condition is that the leaf node.

Today’s article focuses on how to parse a binary expression with the ast package and the parser package, and see how powerful it is to use it to make a very simple rule engine.

In fact, there are more interesting things you can do with the ast package. For example, convert thrift files to proto files in bulk, parse sql statements and do some auditing ……