Today, let’s talk about an interesting question: Unplug the cable for a few seconds, then plug it back in, does the original TCP connection still exist?

Is this really the case?

There is a problem with this logic. The problem is that the wrong assumption is made that unplugging the cable affects the transport layer, when in fact it does not.

I did a small experiment on my computer, I connected to my cloud server with ssh terminal, then I simulated the disconnection scenario by disconnecting the wifi, at this time the status of the TCP connection did not change, it was still in ESTABLISHED state.

From the results of this experiment, we know that the action of unplugging the cable does not affect the state of the TCP connection.

The next step is to see what the two parties do after the cable is unplugged.

To address this issue, we need to discuss it in different scenarios.

After the client unplugs the network cable, the data message sent by the server to the client will not get any response. After waiting for a certain length of time, the server will trigger the timeout retransmission mechanism to retransmit the unansmitted data message.

At this point, the TCP connection between the client and the server still exists, and it feels like nothing has happened.

At this point, both the client and server TCP connections are disconnected.

How many times are the TCP data messages retransmitted?

On Linux systems, a configuration item called tcp_retries2 is provided, and the default value is 15, as shown below.

This kernel parameter controls the maximum number of timeout retransmissions in case a TCP connection is established.

However, just because tcp_retries2 is set 15 times, it does not mean that the TCP connection will be terminated after 15 retransmissions, but the kernel also determines this based on the “maximum timeout”.

Each timeout round is multiplied, for example, the first timeout retransmission is triggered after 2s, the second after 4s, the third after 8s, and so on. 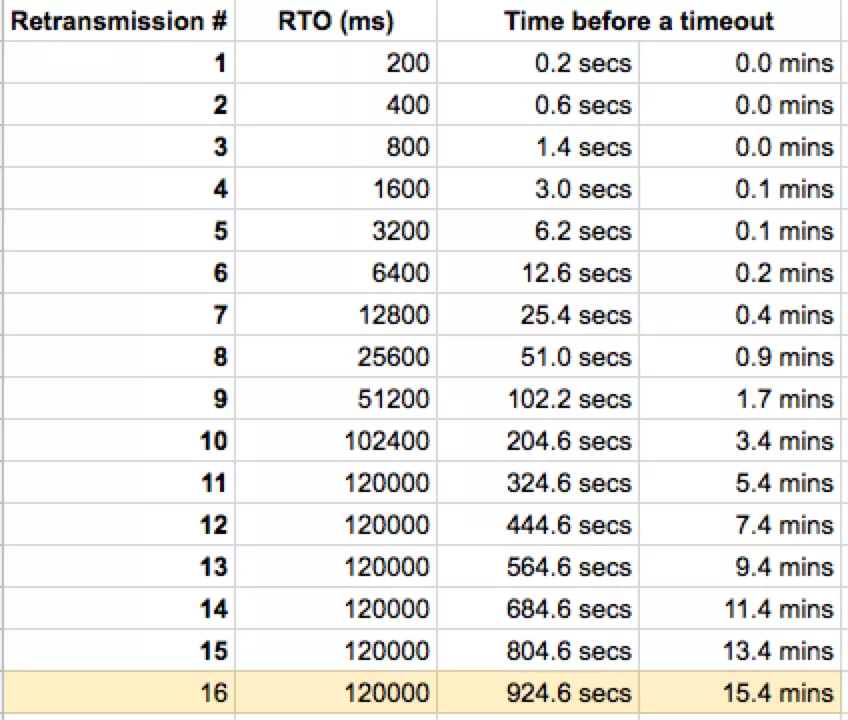 The kernel will calculate a maximum timeout based on the value set by tcp_retries2.

If a message is retransmitted and no response is received from the other party, the retransmission will be stopped and the TCP connection will be disconnected after one of the two conditions, “maximum number of retransmissions” or “maximum timeout”, is reached first.

No data transfer after disconnecting the network cable

If TCP keepalive is not enabled, the TCP connection between the client and the server will always exist after the client is unplugged and no data is transferred from either side.

If TCP keepalive is enabled, after the client is unplugged, even if neither side is transmitting, TCP will send probe messages after a period of time.

Therefore, the TCP keepalive mechanism can be used to determine if the other TCP connection is alive by probing messages when there is no data interaction between the two parties.

What exactly does the TCP keepalive mechanism look like?

If there is no connection-related activity during this time period, the TCP keepalive mechanism kicks in and sends a probe message every time interval, which contains very little data. If there is no response to several consecutive probe messages, the current TCP connection is considered dead and the kernel notifies the higher-level application of the error.

In other words, it takes at least 2 hours, 11 minutes and 15 seconds to find a “dead” connection on a Linux system.

The TCP keepalive mechanism takes too long to detect, right?

TCP keepalive is implemented at the TCP layer (kernel state) as a bottom-up solution for all TCP-based transport protocols.

In fact, our application layer can implement its own detection mechanism that can detect whether the other side is alive or not in a shorter period of time.

For example, web service software generally provides the keepalive_timeout parameter to specify the timeout for HTTP long connections. If the timeout for HTTP long connections is set to 60 seconds, the web service software will start a timer and if the client does not initiate a new request within 60 seconds after sending an HTTP request, the timer will trigger a callback function to release the connection when the time is up. 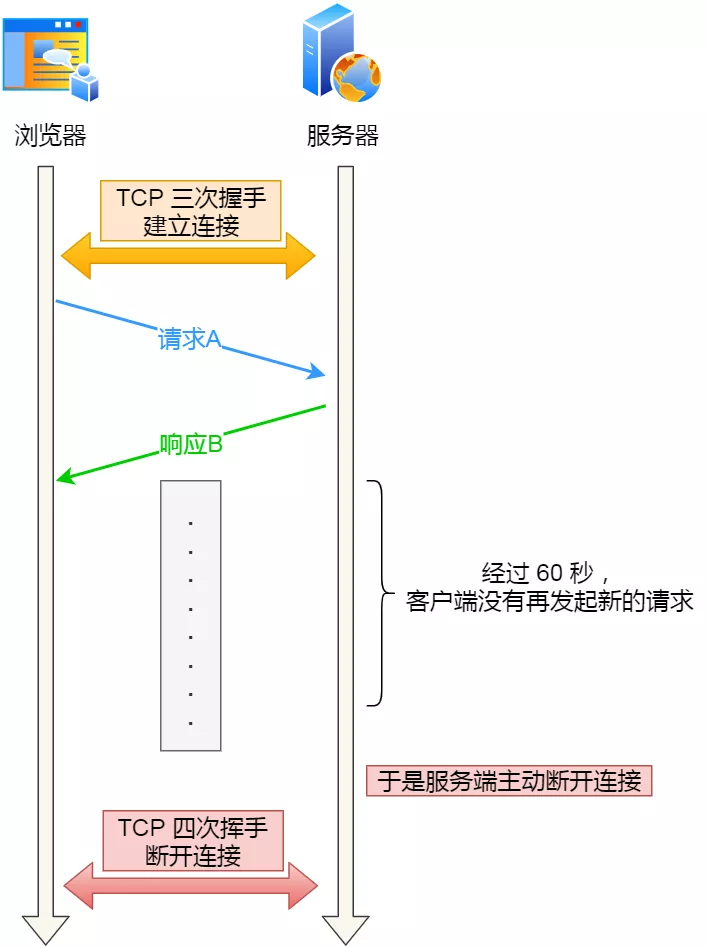 In case of no data transfer.

In the first scenario, the fact that the client is down is not perceived by the server as well as the unplugged cable, so if there is no data transfer and the TCP keepalive mechanism is not enabled, the TCP connection on the server will remain in ESTABLISHED connection until the server restarts the process.

In the second scenario, after killing the client’s process, the client’s kernel sends a FIN message to the server, with four waves from the client.

So, even if TCP keepalive is not enabled and there is no data interaction between the two sides, if one of the processes crashes, the operating system can sense this process and will send a FIN message to the other side and then perform four TCP waves with the other side.