Kubernetes started out by providing only Extender. The Extender scheduler plugin, which enables non-intrusive extensions by deploying a web service, has several problems.

Scheduling Framework The Scheduling Framework is a new set of “plug-in” APIs that allow many scheduling features to be implemented using plug-ins while keeping the scheduler “core” simple and maintainable. Scheduler plugins must be written in Go and compiled with Kubernetes scheduler code, which has a learning cost.

Although Extender is simple, in the long run, try to choose Scheduling Framework. here is a detailed compilation of these 2 extensions based on the official design documentation.

Scheduler Extender is actually an additional web service that extends the default scheduler to adjust scheduling decisions at different stages by registering an external webhook. Filter method, Prioritize method, Bind method implemented according to your needs.

When scheduling pods, Extender allows external processes to filter nodes and prioritize them. Two separate http/https calls are made to Extender, the “filter” and “prioritize” operations. If the pod cannot be scheduled, the scheduler will try to preempt lower priority pods from the node and send them to Extender’s “preempt” interface (if configured) Extender can return a subset of nodes and new evictees to the scheduler. In addition, Extender can optionally bind the pod to the apiserver by implementing a “bind” operation.

To use Extender, a scheduler configuration file must be created. Configure whether the access method is http or https and the timeout configuration, etc.

Multiple Extenders can be configured and the scheduler will call them in order.

The Extender Web module can implement the following 4 interfaces as needed, each with a corresponding request and response.

The Scheduling Framework is a set of new “plug-in” APIs added to the existing Kubernetes scheduler that allow many scheduling features to be implemented as plug-ins and compiled into the scheduler, while keeping the scheduling “core” simple and maintainable. maintainable.

As more and more features are added to the Kubernetes scheduler. These new features continue to make the code larger and the logic more complex. This makes the scheduler harder to maintain, bugs harder to find and fix, and those running custom schedulers have difficulty catching up and integrating new changes. While the current Kubernetes scheduler provides webhooks to extend its functionality. However, these are limited in several ways.

The above limitations prevent building a high-performance and more functional scheduler. Ideally, it would be desirable to have an extension mechanism that is fast enough to allow conversion of existing functions to plugins, such as predicate and priority functions. Such plugins would be compiled into the scheduler binaries. In addition, authors of custom schedulers can compile custom schedulers using (unmodified) scheduler code and their own plugins.

The scheduling framework defines new extension points and Go APIs in the Kubernetes scheduler for use by “plugins”. Plugins add scheduling behavior to the scheduler and include it at compile time. The scheduler’s ComponentConfig will allow plugins to be enabled, disabled, and reordered. Custom schedulers can write their plugins “out-of-tree” and compile a scheduler binary containing their own plugins.

If a pod is determined to be unschedulable or there is an internal error, either the scheduling cycle or the binding cycle can be aborted. The pod will return to the queue and retry. If the binding cycle is aborted, it will trigger the Unreserve method in the Reserve plug-in.

These plugins are used to sort the pods in the scheduling queue. They will essentially provide less(pod1, pod2) functionality. Only one queue sort plugin can be enabled at a time.

PreFilter is called once in each scheduling cycle. These plugins are used to preprocess information about pods or to check clusters, certain conditions that pods must meet. A pre-filter plugin should implement a PreFilter interface, and if the pre-filter returns an error, the scheduling cycle is aborted.

The Pre-filter plugin may implement the optional PreFilterExtensions interface, which defines AddPod and RemovePod methods to incrementally modify its pre-processing information. The framework guarantees that these functions will only be called after the PreFilter, on the cloned CycleState, and possibly multiple times before calling the Filter on a particular node.

Used to filter out nodes that are unable to run Pods. For each node, the scheduler will invoke the filter plugins in the configured order. If any filter plugin marks the node as infeasible, the remaining plugins will not be called for that node. Nodes may be evaluated concurrently, and filter may be called multiple times in the same scheduling cycle.

Called after the Filter phase, and only if no feasible nodes are found for the pod. Plugins are invoked in the order they are configured. If any PostFilter plugin marks the node as dispatchable, the rest of the plugins are not called. A typical PostFilter implementation is preemption, which attempts to make a Pod dispatchable by preempting other Pods.

Information extension point for performing PreScore. Plugins will be invoked using the list of nodes in the filtering phase Plugins can use this data to update internal state or generate logs/metrics.

The plugin here has two phases.

The first stage is called “score” and is used to rank the nodes that have passed the filtering stage. The scheduler will call the Score function of each scoring plugin for each node.

For example, suppose the plugin BlinkingLightScorer ranks nodes based on the number of blinking lights they have.

However, the maximum count of blinking lights may be small compared to the MaxNodeScore. To solve this problem, BlinkingLightScorer should also implement NormalizeScore.

If Score or NormalizeScore returns an error, the scheduling cycle is aborted.

Note: The implementation of the Unreserve method in the Reserve plugin must be idempotent and cannot fail.

These plugins are used to block or delay the binding of Pods. The Permit plugin can do one of three things.

While any plugin can receive a list of reserved Pods from the cache and approve them (see FrameworkHandle), we expect only permission plugins to approve bindings to reserved Pods that are in the “waiting” state. Once a Pod is approved, it is sent to the pre-binding phase.

Used to perform any work required before binding a pod. For example, a prebind plugin might provide a network volume and mount it on the target node before allowing the pod to run.

If any PreBind plugin returns an error, the pod will be rejected and returned to the scheduling queue.

This is an information extension point. the PostBind plugin is called after a Pod has been successfully bound. This is the end of the binding cycle and can be used to clean up the associated resources.

Most plugin functions (except for the Queue Sort plugin) will be called with the CycleState parameter. cycleState represents the current scheduling context.

CycleState will provide an API for accessing data scoped to the current scheduling context. Because binding loops may execute concurrently, plugins can use CycleState to ensure they are processing the correct requests.

CycleState also provides an API similar to context.WithValue that can be used to pass data between plugins with different extension points. Multiple plugins can share state or communicate through this mechanism. This state is only retained for the duration of a single dispatch context. Note that plugins are assumed to be trusted. The scheduler does not prevent a plug-in from accessing or modifying the state of another plug-in.

Warning: Data referenced via CycleState is invalid after the scheduling context ends, and plugins should not hold a reference to this data for longer than necessary.

Warning: FrameworkHandle provides access to the kubernetes API Server and the scheduler’s internal cache. However, the two are not guaranteed to be synchronized, so extra care should be taken when writing plugins that use data from both of them.

Providing plug-in access to the API Server is necessary to implement useful features, especially if those features use object types that are not normally considered by the scheduler. Providing a SharedInformerFactory allows plugins to share caches securely.

Each plugin must define a constructor and add it to the hard-coded registry.

Plugins can also be added to a registry object and injected into the scheduler.

When a plugin is instantiated, it is passed config args and a FrameworkHandle.

Note: In a scheduling context, each extension point is evaluated serially.

In the main thread of the scheduler, only one scheduling cycle is processed at a time. Any extensions up to and including permit will be completed before the start of the next scheduling cycle (the queue sorting extension is a special case. It is not part of the scheduling context and can be called for many pod pairs simultaneously). After the permit extension point, the binding cycle is executed asynchronously. This means that the plugin may be invoked by two different scheduling contexts at the same time. Stateful plugins should be careful to handle these cases.

Finally, the Unreserve method in the Reserve plugin can be called from either the main thread or the bind thread, depending on how the pod is rejected. 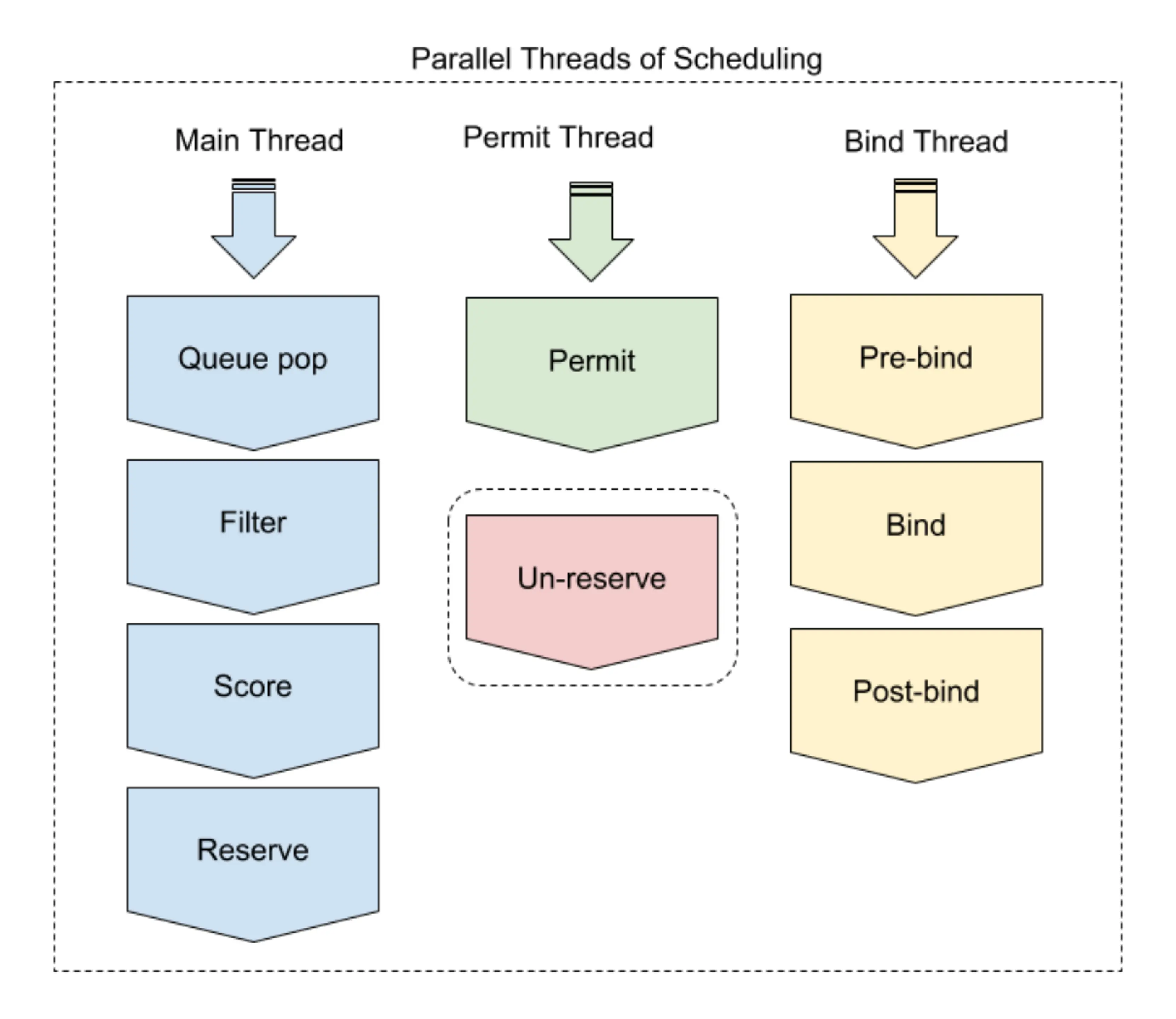 The scheduler’s component configuration will allow plugins to be enabled, disabled, or otherwise configured. Plugin configuration is divided into two parts.

Plugin configurations are organized by extension points. Each list must contain plugins that register multiple points.

The order of plugin execution is determined by the order in which the plugins appear in the configuration. Plugins that register multiple extension points can have a different order at each extension point.

Plugins can receive parameters with arbitrary structure from their configuration. Because a plugin may appear in multiple extensions, the configuration is located in a separate list in PluginConfig.

The current KubeSchedulerConfiguration type has apiVersion:kubescheduler.config.k8s.io/v1alpha1. This new configuration format is v1alpha2 or v1beta1. When newer versions of the scheduler parse v1alpha1, the policy section will be used to construct the equivalent plugin configuration.

Cluster Autoscaler must run Filter plugins instead of predicates. This can be done by creating a Framework instance and calling RunFilterPlugins.