With the popularity of HTTPS, the word TLS also appears more frequently, so what is TLS and how does TLS make HTTP transmission secure?

TLS (Transport Layer Security), formerly known as SSL (Secure Socket Layer), is located between TCP and the application layer. Compared to HTTP, HTTPS does not change the protocol itself, but adds a layer of TLS between TCP and HTTP for encryption to ensure information security.

For information transmitted in clear text, there are several risks

TLS addresses all three of these issues through multiple measures.

We can see later how TLS uses both to ensure security and not degrade performance.

The TLS handshake process is primarily designed to accomplish the following.

This process negotiates the exchange of all information necessary for subsequent encrypted communications to be viable.

The TLS handshake can be divided into the following steps

At this point, both parties have a session key for symmetric encryption, which is used for subsequent communications.

The image above is the result of a handshake packet capture when visiting this blog.

Another key exchange algorithm is the Diffie-Hellman algorithm, where both the client and the server generate a pair of public and private keys, and then send the public key to each other. After each party gets the other’s public key, they use a digital signature to ensure that the public key has not been tampered with, and then combine it with their own private key to compute the same key.

Here, a function called key derivation function (kdf) is also used to derive multiple keys from secret information such as the master key to improve the randomness of the key and ensure its security.

In fact, the two numbers obtained when generating a key pair are equal, i.e., either one encrypted can be decrypted by the other one, and whether it becomes a public key or a private key depends on which one is made public. For certificates, the one used for decryption is still called public key because it is public, and the one used for encryption is called private key. 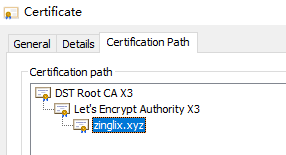 The above picture is the certificate information of this blog, you can see it is issued by Let’s encrypt, and there is a layer of DST Root CA on it, this layer is the root CA. the trusted root CA certificate is distributed with Windows, Chrome and other software by default. When the client verifies the certificate, it will be authenticated layer by layer until the root, then it will be compared with the trustworthy certificate in the system, and if it comes from a trusted CA, then the certificate chain is considered to be trusted.

CA-issued certificates are considered trustworthy because the CA verifies the identity of the applicant during the issuance process, from the simplest site ownership to the more stringent written submission of information by the applicant, thus ensuring that the target of the issuance is the person who actually owns the site. Moreover, the CA’s private key is usually strictly protected and the issuance process is strictly supervised, so that if there is abusive issuance of certificates or private key leakage then the root certificate will be revoked, and any certificate chain based on this is considered unreliable, so as to avoid the possibility of forged certificates by such coercion.

The key to a forged certificate is that it cannot be certified by the root CA and thus cannot be trusted. However, if there is a forger’s root certificate in the system, all the certificates of the website issued by the forger in this way will be trusted by the system, which will lead to information that can be forged by the attacker, so it is not easy to add a certificate of unknown origin to the system. 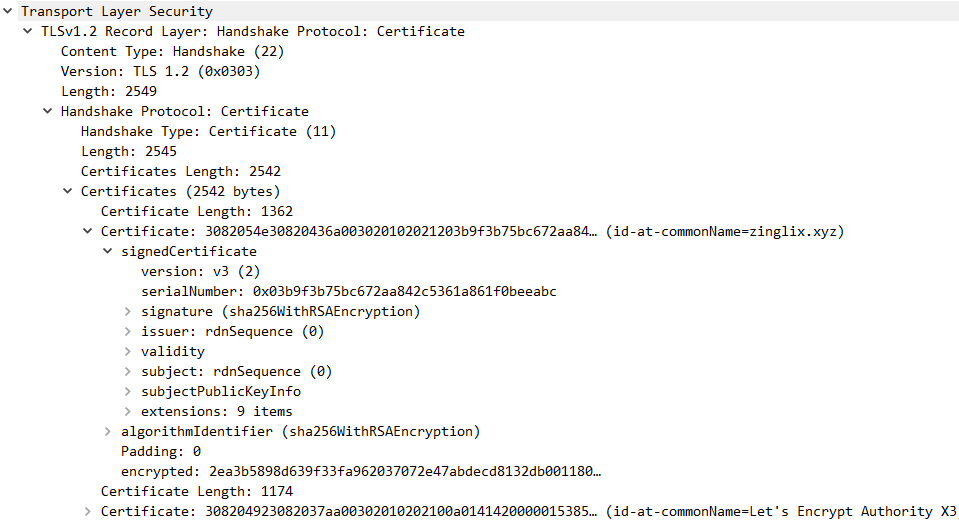 Now let’s go back to the three problems that TLS solves: eavesdropping, tampering, and forgery.

One of the things worth mentioning is that although it seems to be possible to modify the packet contents and still be dangerous, this will only lead to interference with the communication. But after all, if I can modify the packet content, then I can choose not to forward the packet, which is beyond the scope of TLS, and it does not matter as long as it does not turn out to be what the attacker has carefully chosen.

It can be said that TLS has successfully completed the problem of information security of communication and can ensure that the data transmitted by upper layer applications are not obtained by third parties, but there are still some minor problems.

The above image shows the contents of the Client Hello packet grab, which you can see has the address of the access. The information during the handshake is explicit, and for SNI information. This information should be located in the HTTP packet header, but during the handshake the server must know which application it corresponds to, so the client must provide this information, but there is nothing available to encrypt it, so the SNI can only be transmitted in clear text, resulting in a third party still knowing which URL is being accessed.

The good thing is that TLS is still improving, and many problems have been proposed, so I believe that a more secure Internet will appear soon.