This article is based on reading the source code of Kubernetes v1.16 and describes the workflow of Deployment Controller through flowcharts, but also contains related code for reference.

In K8s, pods are the smallest resource unit, and the replica management of pods is implemented through ReplicaSet(RS); deployment is actually based on RS to do higher-level work.

This is the controller model of Kubernetes, where top-level resources extend new capabilities by controlling lower-level resources. deployment does not manage pods directly, but rather controls the replicas of pods by managing rs. deployment implements versioning by controlling rs: each release corresponds to a version, each version has an rs Deployment only needs to ensure that the state of rs is expected in all cases, and rs ensures that the state of the pod is expected in all cases.

With an understanding of where deployment fits into K8s, let’s look at how this resource achieves its desired state.

Kubernetes APIs and controllers are based on horizontal triggering, which facilitates self-healing and periodic orchestration of the system.

The concept of horizontal triggering comes from hardware interrupts, which can be triggered either horizontally or edge-triggered.

First look at the definition of DeploymentController in K8s.

There are several main components.

Next, look at the workflow of the deployment controller.

The deployment controller takes advantage of the informer’s ability to listen to resources and work with other controllers. There are three shared informers – deployment informer, rs informer, and pod informer.

When the deployment controller starts, a worker controls the syncHandler function to push out the items in the workqueue in real time and perform tasks based on the items. The main tasks include: adopting and discarding rs, distributing events to eventRecorder, and deciding how to handle subordinate resources based on the escalation policy.

First of all, let’s take a look at workqueue, which is actually a queue used to assist informer in distributing events. The whole process can be sorted out in the following diagram. 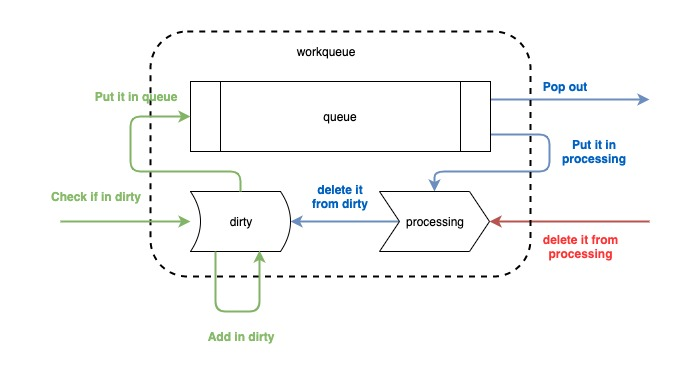 add is to push the message into the queue. The message comes from the informer, in fact, the message is not the whole event, but the resource key, that is, namespace/name, in this form to inform the business logic that a resource change event has come, you need to take this key to get the specific resources in the indexer. As the process shown in green above, after the message is carried out, first check whether it exists in dirty, if it already exists, do not do any processing, indicating that the event is already in the queue, do not need to repeat the process; if it does not exist in dirty, the key will be stored in dirty (as the key of the map, the value of the empty structure), and then pushed into the queue a copy.

get is the process of getting the key from the queue by the handle function. When the key is popped out of the queue, it is put into processing and its index in dirty is removed. The reason for this step is that putting the item in processing marks it as being processed, and removing it from dirty does not affect the events that will be added to the queue later.

done is the step the handle must perform after processing the key, which is equivalent to sending an ack to the workqueue that I have finished processing and the action will just remove it from the processing.

With this small and beautiful first-in-first-out queue, we can avoid duplicate fetching of resources from the indexer when multiple events occur. Let’s go through the deployment controller process.

The adoption and abandonment process of replicaSet

First, let’s look at the adoption process of rs.

In all three hook functions of rs, the process of recognition is involved.

When listening to the change of rs, it will find the corresponding deployment into the queue according to the ownerReferences field of the rs; if the field is empty, it means it is an orphan rs and starts the rs recognition mechanism.

The process of adoption and abandonment of rs by a deployment is the process of processing items from the workqueue and finding all rs owned by the current deployment.

This process will poll all rs, and if there is an owner and it is the current deployment, then determine whether the label satisfies the deployment’s selector, and include the result if it does; if it does not, start the abandonment mechanism, and just delete the ownerReferences of the rs, making it an orphan and do nothing else. This is the reason why there is one more rs with replicas!=0 after the deployment selector is modified.

If rs has no owner and is an orphan, determine whether the label satisfies the deployment’s selector, and if it does, start the adoption mechanism, set its ownerReferences to the current deployment, and then include the result.

The following is the source code of the whole process.

Functions of adoption and abandonment.

If the deployment’s update policy is Recreate, the process is to delete the old pod and start a new one, as follows. 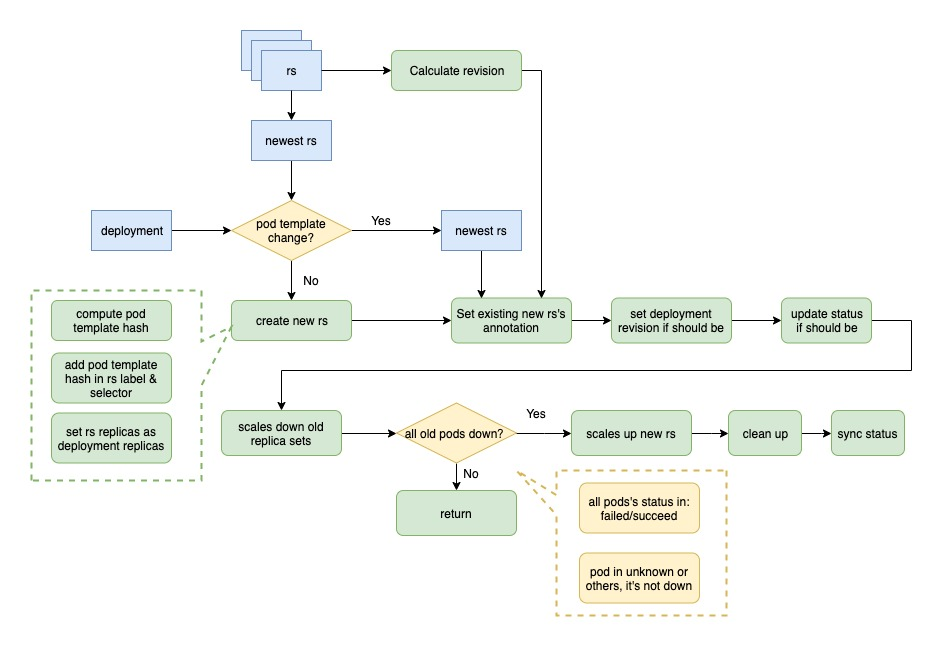 First, according to the adoption and abandonment process of rs in the previous step, get all the rs of the current deployment, sort them to find the latest rs, compare their pod template with the pod template of the deployment, and create new rs if they do not match.

The process of creating new rs is: calculate the hash value of the pod template of the current deployment and add it to the rs label and selector.

Calculate the maximum revision of all the old rs, add it by one and use it as the revision of the new rs, and set the following annotation for the new rs.

set the revision of the current deployment to the latest if it is not up to date, and update its status if it needs to be updated.

Downgrade the old rs, i.e. set the number of copies to 0.

Determine whether all the old pods are currently stopped. The condition is that the pod state is failed or succeed, unknown or all other states are not stopped; if not all the pods are stopped, exit this operation and process again in the next loop.

If all pods are stopped, upgrade the new rs, i.e., set its copy number to the number of copies of the deployment.

Finally, cleanup work is done, such as deleting excess rs when the number of old rs is too high.

Here is the source code of rolloutRecreate.

If the update policy of the deployment is Recreate, the process is to delete the old pod and start a new one as follows. 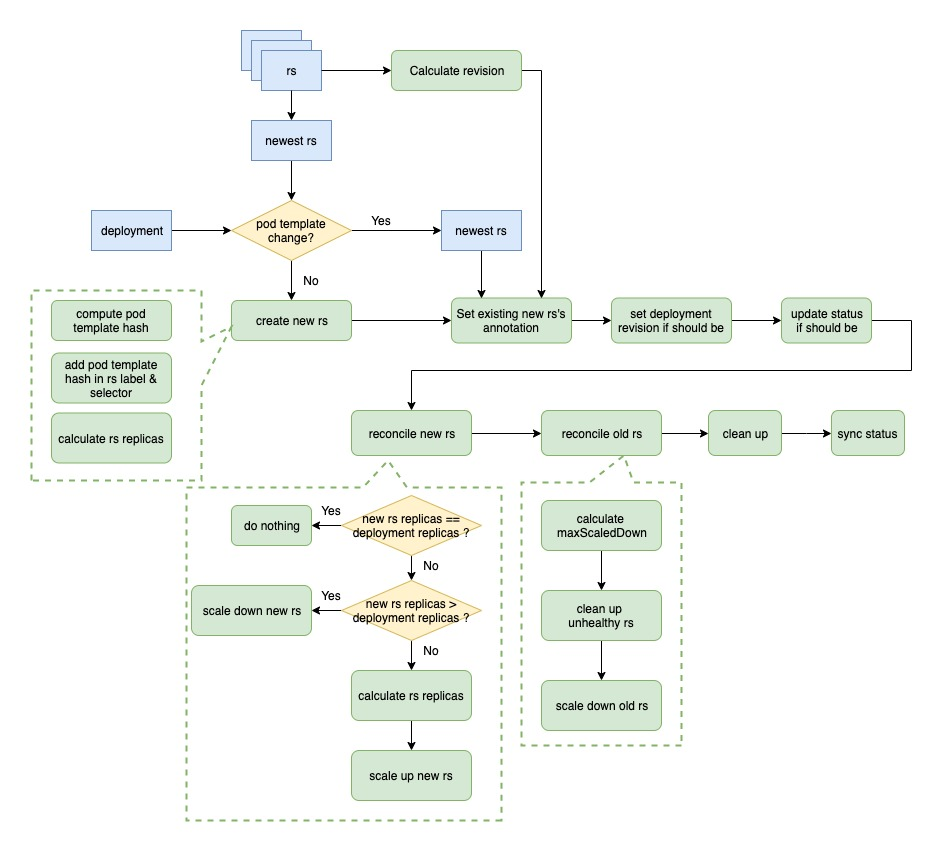 Because Kubernetes uses a declarative API, all a Controller does is calculate an expected state based on current events, determine whether the actual state meets the expected state, and if not, take action to bring it closer.

In this article, we analyze the workflow of Deployment Controller, and although it is tedious, what it does is centered around the goal of “converging to the expected”.

I hope these two articles have given you a glimpse into the general workflow and implementation of Kubernetes Controller Manager.