This article is based on reading the source code of Kubernetes v1.16. The article has some source code, but I will try to describe it clearly by matching pictures

In the Kubernetes Master node, there are three important components: ApiServer, ControllerManager, and Scheduler, which are responsible for the management of the whole cluster together. In this article, we try to sort out the workflow and principle of ControllerManager. 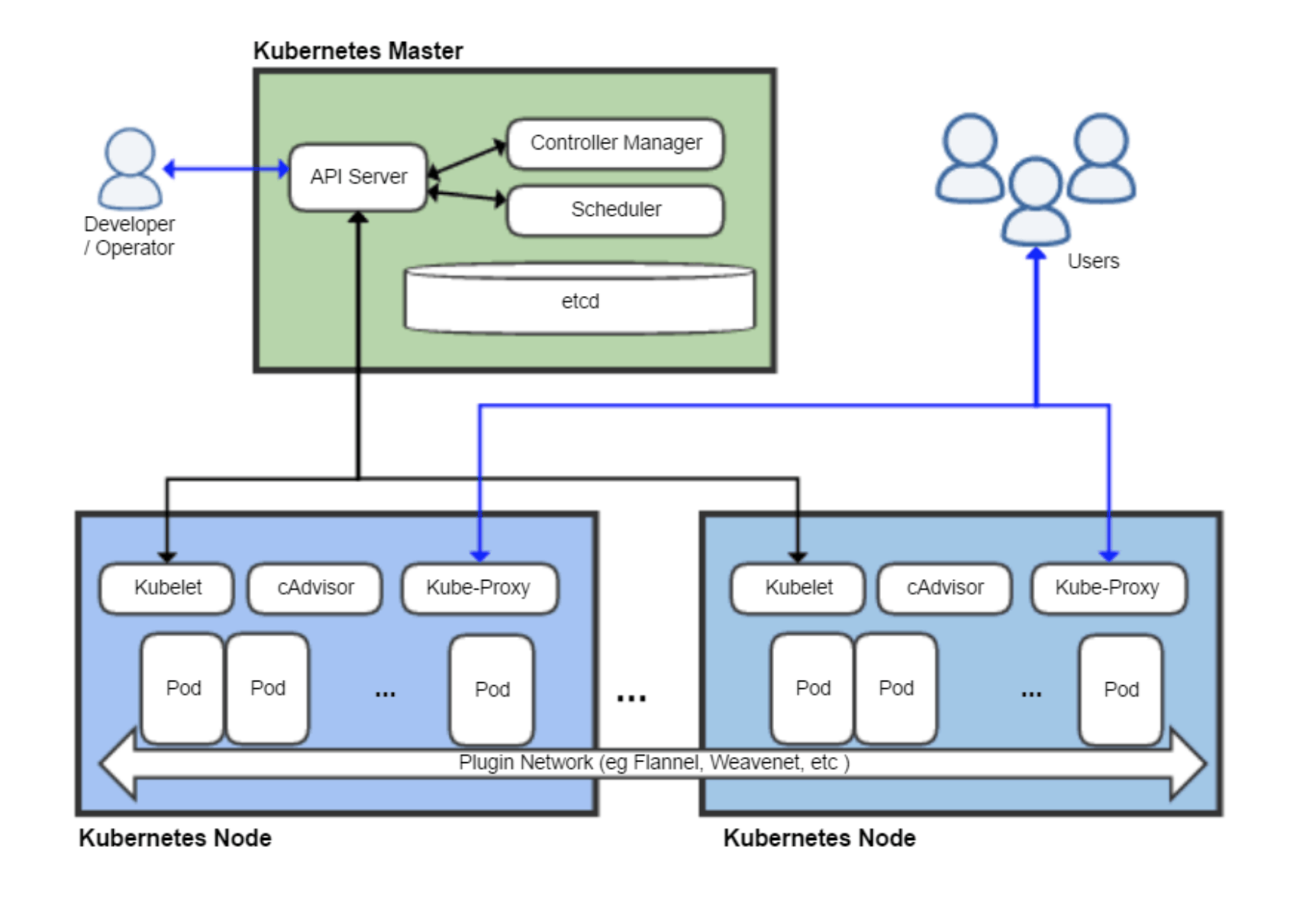 What is Controller Manager

According to the official documentation: kube-controller-manager runs controllers, which are background threads that handle regular tasks in the cluster.

For example, when a Pod created through Deployment exits abnormally, the RS Controller will accept and handle the exit and create a new Pod to maintain the expected number of copies.

From a high-dimensional perspective, Controller Manager mainly provides the ability to distribute events, while different Controllers only need to register the corresponding Handler to wait for receiving and processing events. 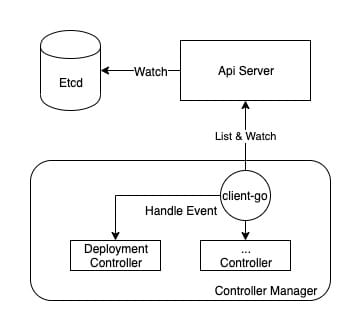 The key module that aids the Controller Manager in event distribution is client-go, and one of the more critical modules is informer.

kubernetes provides an architecture diagram of client-go on github, from which you can see that the Controller is the bottom half (CustomController) of the description, while the Controller Manager is mainly the top half of the completion. 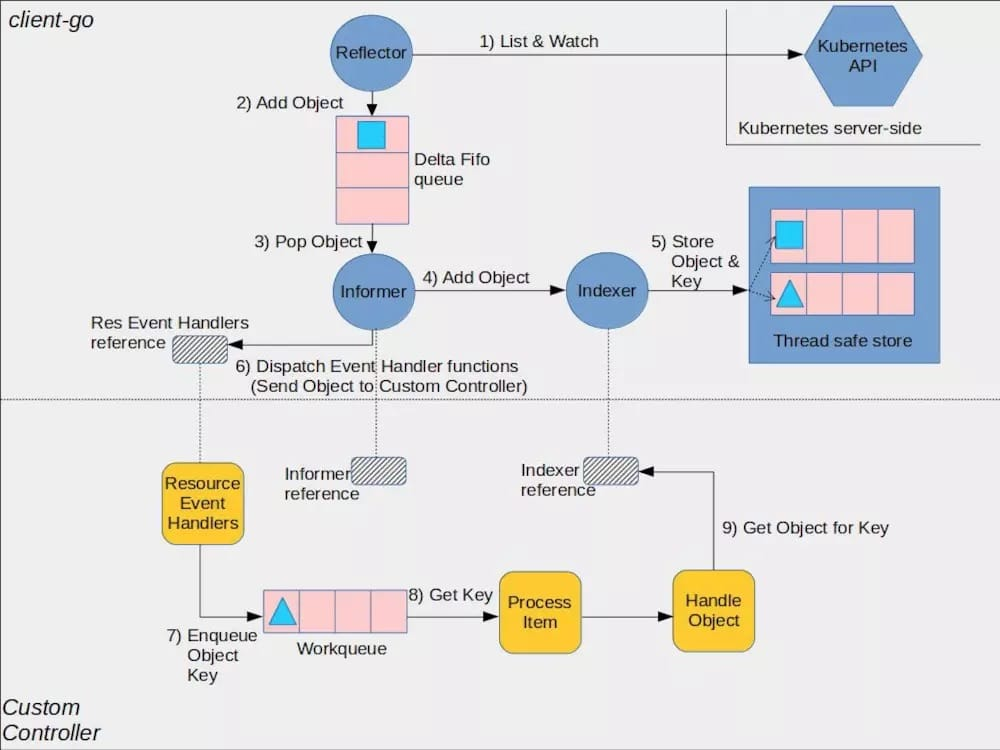 As you can see from the above diagram, Informer is a very critical “bridge”, so the management of Informer is the first thing that Controller Manager does.

Since each Informer maintains a watch long connection to the Api Server, this single instance factory ensures that each type of Informer is instantiated only once by providing a unique entry point for all Controllers to get an Informer.

The initialization logic of this singleton factory.

As you can see from the initialization logic above, the most important part of the sharedInformerFactory is the map named informers, where the key is the resource type and the value is the Informer that cares about that resource type. each type of Informer will be instantiated only once and stored in the map. Different Controllers will only get the same Informer instance when they need the same resource.

When the Controller Manager starts, the most important thing is to run all the Informers through the Start method of this factory.

Here’s how these Informers are created, the Controller Manager is initialized in the NewControllerInitializers function in cmd/kube-controller-manager/app/controllermanager.go. Because of the lengthy code, here is an example of the Deployment Controller only.

The logic for initializing the Deployment Controller is in the startDeploymentController function in cmd/kube-controller-manager/app/apps.go.

The most critical logic is in deployment.NewDeploymentController, which actually creates the Deployment Controller, and the first three parameters of the creation function are Deployment, ReplicaSet, and Pod’s Informer. As you can see, the Informer’s singleton factory provides an entry point for creating Informers with different resources using the ApiGroup as the path.

However, it is important to note that.Apps().V1().Deployments() returns an instance of type deploymentInformer, but deploymentInformer is not really an Informer (despite its Informer name). It is just a template class whose main function is to provide templates for the creation of Informers focused on Deployment as a specific resource.

The template method (design pattern) is used here, and although it’s a bit convoluted, you can refer to the following diagram to sort it out. The key to understanding it is that the Informer’s differentiated creation logic is delegated to the template class. 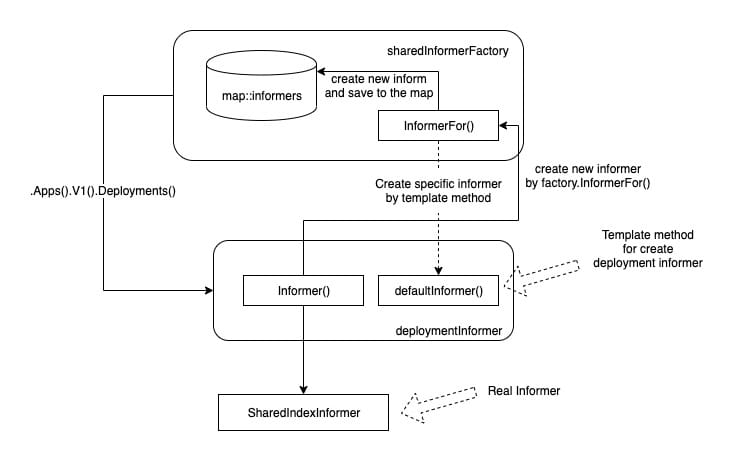 Finally, the structure named sharedIndexInformer will be instantiated and will actually take on the responsibilities of the Informer. It is also the instance that is registered to the Informer factory map.

The sharedIndexInformer is a component in client-go, and its Run method is a few dozen lines long, but it does a lot of work. This is where we get to the most interesting part of the Controller Manager.

The startup logic of sharedIndexInformer does several things.

These terms (or components) were not mentioned in the previous article, but these four things are the core of what the Controller Manager does, so I’ll cover each of them below.

sharedIndexInformer is a shared Informer framework where different Controllers only need to provide a template class (like the deploymentInformer mentioned above) to create an Informer specific to their needs.

The sharedIndexInformer contains a bunch of tools to do the Informer’s job, and the main code is in client-go/tools/cache/shared_informer.go. Its creation logic is also in there.

In the creation logic, there are several things to look out for:

In addition, it also contains the DeltaFIFO queue and controller mentioned in the startup logic above, which are described below.

The processor is the component that manages the registered Handlers and distributes events to different Handlers.

The core of sharedProcessor’s work revolves around the Listener slice of listeners.

When we register a Handler to the Informer, it is eventually converted into an instance of a structure called processorListener.

This instance contains mainly two channels and the Handler method registered outside. The processorListener object instantiated here will eventually be added to the sharedProcessor.listeners list. 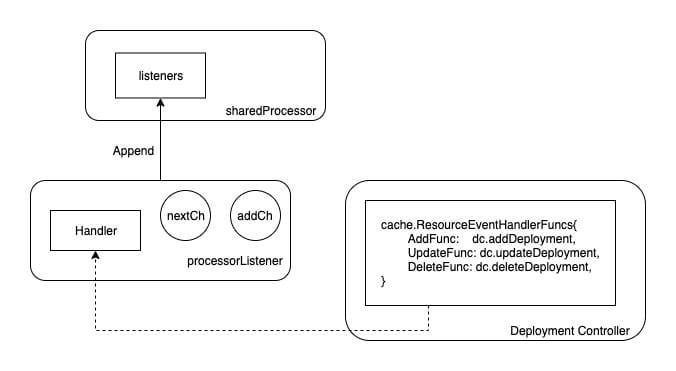 As you can see, sharedProcessor will execute the run and pop methods of listener in sequence when it starts, so let’s look at these two methods now.

Since the listener contains the Handler methods registered with the Controller, the most important function of the listener is to trigger these methods when an event occurs, and listener.run is to keep getting events from the nextCh channel and executing the corresponding handler.

listener.pop is a very clever and interesting piece of logic.

The reason why listener contains two channels: addCh and nextCh is that Informer cannot predict whether listener.handler is consuming events faster than they can be produced, so it adds a buffer called pendingNotifications. queue to hold events that have not been consumed in time. 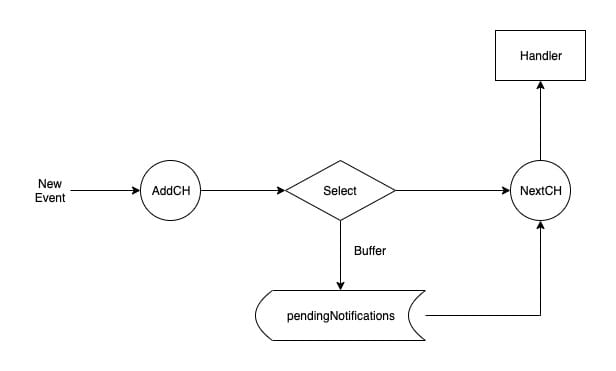 The pop method, on the one hand, keeps getting the latest events from addCh to make sure the producer doesn’t block. Then it determines if a buffer exists, and if it does, it adds the event to the buffer, and if not, it tries to push it to nextCh.

On the other hand, it determines if there are any events left in the buffer, and if there is still stock, it keeps passing it to nextCh.

The pop method implements a distribution mechanism with a buffer that allows events to be continuously passed from addCh to nextCh. But the question arises, where do the addCh events come from?

The source is very simple, listener has an add method with an event as input, which pushes the new event into addCh. The add method is called by the sharedProcessor that manages all the listeners.

As mentioned above, the sharedProcessor is responsible for managing all the Handlers and distributing events, but it is the distribute method that does the real distributing.

So far, we have a clearer picture of one part:

So the remaining question is where do the Informer events come from?

Before analyzing the Informer fetch event, a very interesting gadget that needs to be told in advance is the fifo queue created during sharedIndexInformer.Run.

DeltaFIFO is a very interesting queue, the code for which is defined in client-go/tools/cache/delta_fifo.go. The most important thing for a queue is definitely the Add and Pop methods. DeltaFIFO provides several Add methods, and although different methods are distinguished according to different event types (add/update/delete/sync), they all end up executing queueActionLocked.

The first parameter of the queueActionLocked method, actionType, is the event type.

The second point is easier to understand, if a list request is triggered and the resource to be processed is found to have been deleted, then it does not need to be queued again. The first point needs to be seen together with the out of queue method.

The workflow is shown in the figure. 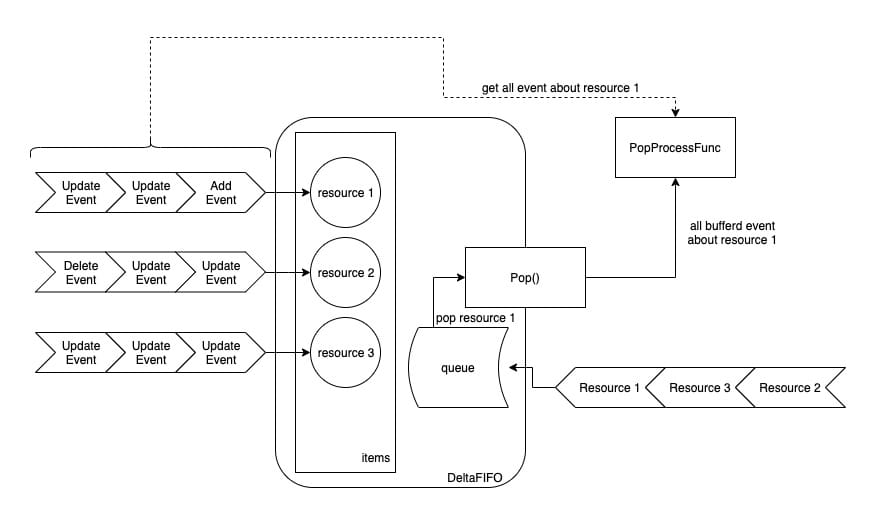 The DeltaFIFO out-of-queue method gets the resource id at the top of the queue from queue, then takes all the events for that resource from items, and finally calls the PopProcessFunc type handler passed in by the Pop method.

So, the feature of DeltaFIFO is that it is the events (of the resource) that are in the queue, and when it comes out of the queue, it gets all the events of the first resource in the queue. This design ensures that there is no starvation due to a resource creating events like crazy, so that other resources do not have the chance to be processed.

DeltaFIFO is a very important component, and the only thing that really makes it valuable is the Informer controller.

While the K8s source code does use the word controller, this controller is not a resource controller like a Deployment Controller. Rather, it is a top-down event controller (taking events from the API Server and sending them down to the Informer for processing).

The responsibilities of the controller are twofold.

The definition of controller is very simple and its core is Reflector.

The code of Reflector is rather cumbersome but simple, it is to list-watch through the listerWatcher defined in sharedIndexInformer and push the obtained events into the DeltaFIFO.

After the controller starts, it starts the Reflector and then executes the processLoop, which is a dead loop that keeps reading the resource events from the DeltaFIFO and handing them to the HandleDeltas method of the sharedIndexInformer (assigned to config. Process).

If we look at the HandleDeltas method of the sharedIndexInformer, we can see that the whole event consumption process works.

Thus, we can organize the entire flow of events as follows. 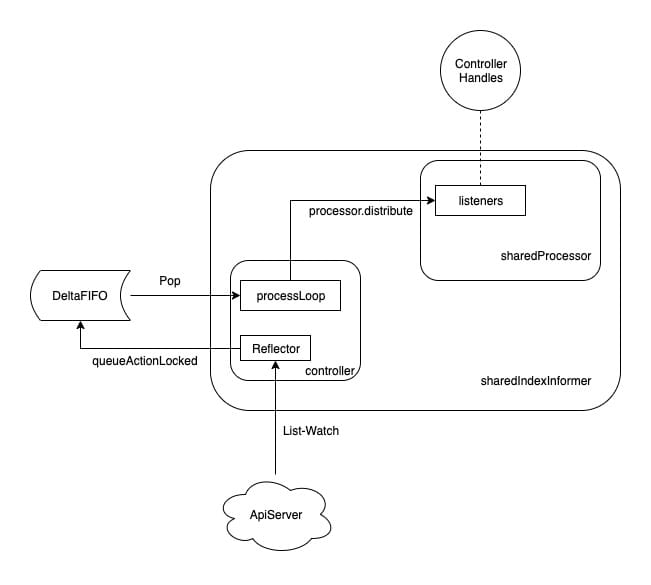 Above, we have sorted out all the logic from receiving to distributing events, but in the HandleDeltas method of sharedIndexInformer, there is some logic that is more interesting, that is, all events are updated to s.indexer first and then distributed.

As mentioned earlier, the Indexer is a thread-safe store, used as a cache in order to relieve the pressure on the ApiServer when the resource controller (Controller) queries the resource.

When there is any event update, the cache in Indexer will be refreshed first, and then the event will be distributed to the resource controller, who will get the resource details from Indexer first, thus reducing unnecessary query requests to the APIServer.

The specific implementation of Indexer storage is in client-go/tools/cache/thread_safe_store.go, and the data is stored in threadSafeMap.

In essence, threadSafeMap is a map with a read/write lock, in addition to which it is possible to define indexes, which are interestingly implemented by two fields.

The relevant logic is relatively simple and can be found in the following diagram. 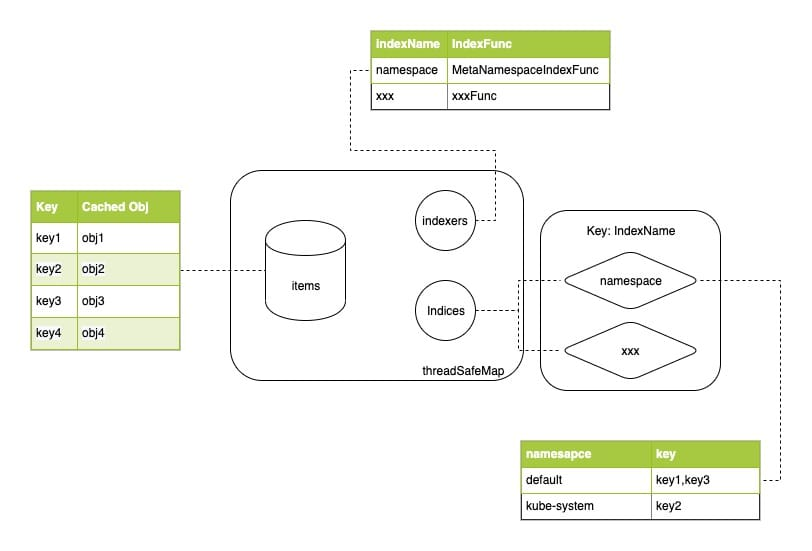 As mentioned at the beginning, when sharedIndexInformer starts, it also starts a cacheMutationDetector to monitor the indexer’s cache.

Because the indexer cache is actually a pointer, multiple Controllers accessing the indexer’s cached resources actually get the same resource instance. If one Controller does not play nice and modifies the properties of a resource, it will definitely affect the correctness of other Controllers.

When the Informer receives a new event, the MutationDetector saves a pointer to the resource (as does the indexer) and a deep copy of the resource. By periodically checking whether the resource pointed to by the pointer matches the deep copy stored at the beginning, we know whether the cached resource has been modified.

If KUBE_CACHE_MUTATION_DETECTOR is true, sharedIndexInformer instantiates defaultCacheMutationDetector, which performs periodic checks of the cache at 1s intervals, triggering a failure handler function if it finds the cache modified, or a panic if the function is not defined.