Django describes signal as a “signal dispatcher” that triggers multiple applications, mainly in the form of signals. This article will explain how signals work in Django and how to use them from the perspective of source code analysis.

Django implements a Signal class, which is used to implement the function of “signal dispatcher”. The working mechanism is shown in the figure below, which is divided into two parts: first, each callback function that needs to be dispatched is registered to signal, and second, the event triggers sender to send the signal. 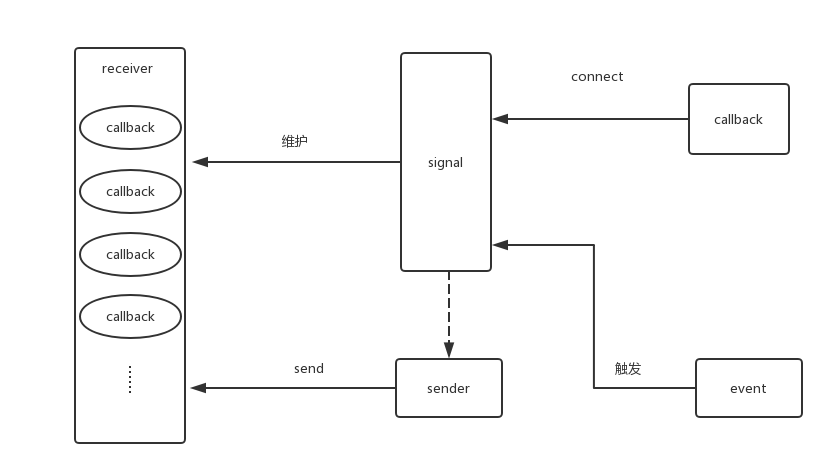 Let’s take a look at the source code of connect, as follows.

The code is very clean and is divided into four parts: checking parameters, getting the ID of receiver, receiver weak references, and locking. Here we mainly look at the last two parts.

method and function: Python’s functions are the same as those of other languages, including function names and function bodies, and supporting formal parameters; compared to functions, methods have an additional layer of class relationships, that is, they are functions defined in classes. This function is used to configure method step by step, see an excerpt of the source code.

Anyone familiar with Python garbage collection should know that Python only garbage collects an object when its reference count is 0. Therefore, all references to callback functions in signal are weakly referenced by default to avoid memory leaks.

First, the weak argument to connect indicates whether to use a weak reference, and the default is True; receiver can be either a function or a method, and the reference to bound method is short-lived, in line with the lifetime of the instance, so the standard weak reference is not enough to keep it, and weakref. WeakMethod to emulate the weak reference of bound method; finally the weakref.finalize method returns a callable terminator object that is called when receiver is garbage collected, unlike normal weak references, the terminator will always be alive before it is called and die after it is called, thus greatly simplifying life cycle management.

Locks exist to achieve thread safety, which means that when multiple threads are present at the same time, the result still meets expectations. Obviously, the receiver registration process in signal is not inherently thread-safe; the thread-safe method in signal is locking to achieve atomic operation of the connect method.

Locks are defined in the signal’s __init__ method, using Lock from the standard library.

To be precise, the sender in signal is an identifier to record “who” triggered the signal, what really works is the send method, which is used in the event to trigger the signal to all receivers “in event. Here is the source code for send.

It is easy to see that the process of triggering all the recorded callback functions is synchronous, so signal is not suitable for handling large batches of tasks, but we can rewrite it as asynchronous tasks.

How to use signal

The use of signal requires only two configurations, one is the registration of the callback function, and the other is the event triggering.

There are two ways to register callback functions, one is the regular signal.connect(); the other is that Django signal provides a decorator receiver, which can be decorated by passing in which signal it is, or you can specify sender, and if you don’t specify it, you receive all the information sent by sender. Event triggering is done by calling <your_signal>.send() where it can be triggered. A demo is given below.

Django has a number of built-in signals that we can use directly.