I had no idea about the use of git rebase -i, but once I needed to merge multiple commits, I almost lost all my commits, but luckily I was able to recover them later. So let’s document the process of learning the rebase command. 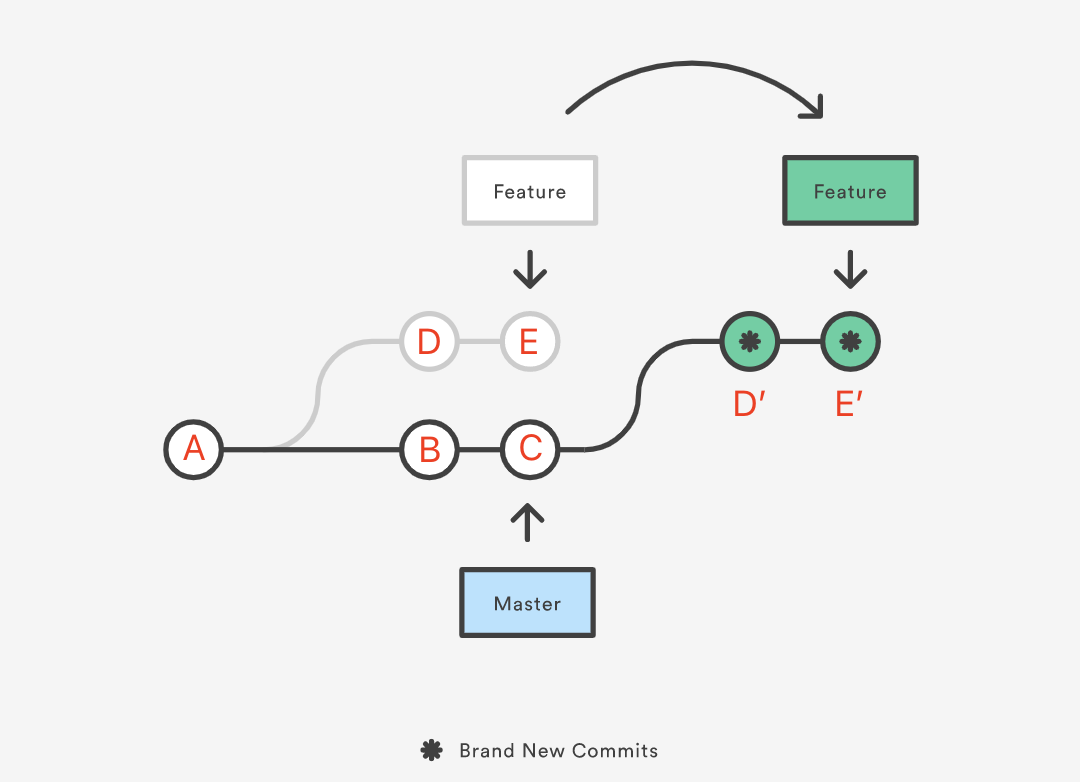 You can also read the above as changing the base of the Feature branch from commit A to commit C. It looks like you created the branch from commit C and committed D and E. But in reality, it just “looks” like Git internally copies commits D and E, creates new commits D’ and E’, and applies them to a specific base (A→B→C). Although the new Feature branch looks the same as before, it’s made up of completely new commits.

The essence of the rebase operation is to discard some existing commits and create some new ones accordingly that are the same but actually different.

rebase is typically used to rewrite the commit history. The following usage scenario is very common in most Git workflows.

The difference between rebase and merge

The above scenario can also be accomplished using merge, but using rebase allows us to keep a linear and more tidy commit history. Suppose we have the following branches.

We will get the following submission history.

The steps are basically the same as using merge, the only difference is that the command in step 2 is replaced with: git rebase master.

The execution process is shown in the following diagram.

We will get the following submission history.

You can see that the commit history formed using the rebase method is completely linear, and also looks neater with one less merge commit than the merge method.

Why keep the commit history tidy

What are the benefits of a neater looking commit history?

Using rebase to consolidate remote changes into the local repository is a better option. Pulling remote changes with merge results in a redundant merge commit every time you want to get an update on your project. The result of using rebase is more in line with our intent: I want to build on other people’s completed work to make my changes.

Other ways to rewrite the commit history

When we just want to modify the most recent commit, it is easier to use git commit --amend.

It works for the following scenarios.

If we have already pushed the last commit to a remote branch and the push is now rejected with an error, we can use git push --force to force the push if we want to make sure the branch is not a public branch.

Note that like rebase, Git doesn’t actually modify and replace the previous commit internally, but rather creates a new commit and redirects to it.

The git rebase command has two modes, standard and interactive. The previous examples we used the default standard mode, add the -i or -interactive option to the end of the command to use the interactive mode.

The difference between the two modes

As we mentioned earlier, rebase is “reapplying commits on top of another base”, and during the reapplication process, these commits are recreated and can naturally be modified. In the standard mode of rebase, commits from the current working branch are applied directly to the top of the incoming branch, while in the interactive mode, we are allowed to merge, reorder, and delete commits via the editor and specific command rules before reapplying them.

The most common usage scenarios for the two differ as a result.

While our previous examples all performed rebase operations between two different branches, the rebase command is in fact not limited to branches.

Any commit reference can be treated as a valid rebase base object, including a commit ID, branch name, tag name, or a relative reference like HEAD~1.

Finally, as mentioned earlier, if we execute rebase in interactive mode on a commit of the current branch, we are (indirectly) rewriting all commits after this one. This is described in more detail in the following example.

Suppose we have the following commits in the feature branch.

The next action we will perform is.

Since the commits we need to modify are B→C→D→E, we need to use commit A as the new “base” and all commits after commit A will be reapplied.

You will then be taken to the following editor screen.

(Note that the commit messages after the commit ID above only serve a descriptive purpose, and modifying them here will have no effect.)

The specific commands are explained in considerable detail in the editor comments, so let’s proceed directly as follows.

The commands that we modify or retain for each commit are then executed in order from top to bottom.

This is exactly as expected, and you can see that all the commit IDs after commit A have changed, which confirms what we said earlier about Git re-creating these commits.

Another common scenario for using rebase is to execute rebase before pushing to a remote for merging, typically to ensure a tidy commit history.

We first develop in our own feature branch, and when development is complete, we need to rebase the current feature branch to the latest master branch to resolve any potential conflicts before committing changes to the remote. In this case, the maintainer of the master branch of the remote repository no longer needs to integrate and create an additional merge commit, but only needs to perform a fast-forward merge. This results in a completely linear commit history, even in cases where multiple branches are developed in parallel.

rebase to other branch

We can use rebase to compare two branches, take out the corresponding changes, and apply them to the other branch. For example.

Suppose we created a branch patch based on commit D of the feature branch and added commits F and G. Now we want to merge the changes made by patch into master and publish it, but we don’t want to merge feature yet, in which case we can use the -onto <branch> option of rebase.

This will take the patch branch, compare the changes it made based on feature, and then reapply those changes to the master branch, making patch look like it made the changes directly based on master. The executed patch looks like this.

We can then switch to the master branch and perform a fast-forward merge on patch.

If you run git pull directly after a recent release of Git, you will get the following message.

It turns out that git pull can also be merged with rebase, because git pull is actually equivalent to git fetch + git merge, and we can replace git merge with git rebase in the second step to merge the changes fetched by fetch, again to avoid additional merge commits and maintain a linear commit history.

We can think of the Matser branch in the comparison example as a remote branch and the Feature branch as a local branch, and when we do a local git pull, we are actually pulling changes from Master and merging them into the Feature branch. If both branches have different commits, the default git merge method will generate a separate merge commit to consolidate those commits; using git rebase is equivalent to re-creating the local branch based on the latest commits from the remote branch and then reapplying the local commits.

There are several ways to use this.

From the above scenario rebase is very powerful, but we also need to realize that it is not foolproof and even a bit dangerous for newbies, who may find that a commit is missing from git log or get stuck in a step of rebase and don’t know how to recover.

We’ve mentioned above that rebase has the advantage of keeping a neat linear commit history, but it’s also important to realize that it has the potential disadvantages of.

There are also some arguments that we should try to avoid rewriting the commit history.

As well, frequent use of rebase may make it more difficult to locate bugs from the commit history, as described in Why you should stop using Git rebase.

Doing a rebase in interactive mode and executing a command like squash or drop on a commit will delete the commit directly from the branch’s git log. If you accidentally make a mistake, you’ll break out in a cold sweat thinking that these commits are gone for good.

But these commits aren’t really deleted. As mentioned above, Git doesn’t modify (or delete) the original commits, but rather it re-creates a new batch of commits and points the top of the current branch to the new commits. So we can use git reflog to find and redirect to the original commits to restore them, which undoes the entire rebase. Thanks to Git, it doesn’t really lose any commits even if you do something like rebase or commit --amend that rewrites the commit history.

reflogs is a mechanism that Git uses to keep track of updates to the top of the local repository branch. It keeps track of all the commits that the top of the branch has ever pointed to, so reflogs allows us to find and switch to a commit that is not currently referenced by any branch or tag.

Whenever the top of a branch is updated for any reason (by switching branches, pulling new changes, rewriting history, or adding new commits), a new record will be added to reflogs. In this way, every commit we have created locally must be logged in reflogs. Even after the commit history is rewritten, reflogs will contain information about the old state of the branch and allow us to revert to that state if needed.

Note that reflogs is not kept forever, it has an expiration time of 90 days.

Let’s continue from the previous example. Suppose we want to restore the commit history of feature branch A→B→C→D→E→F before rebase, but at this point there are no more commits in git log for the last 5 commits, so we need to look for them in reflogs, and run git reflog with the following result:

The reflogs document the entire process of switching branches and doing a rebase, and continuing down the list, we find the commit F that disappeared from the git log.

Next, we redirect the top of the feature branch to the original commit F via git reset.

Run git log again and you’ll see that everything is back to where it was before.