Go is known for its “self contained battery” and many developers are fond of the feature-rich standard library that comes with Go. Among the Go standard libraries, the net/http package is one of the most popular and commonly used packages, allowing us to generate a medium-performance http server with a few lines of code that supports large concurrency. http.Client is also the most widely used http client, and its performance can meet the needs of most cases. The well-known female gopher Jaana Dogan open source class apache ab http performance testing tool hey is also the direct use of http.Client, rather than using some better performance of third-party libraries (for example: fasthttp).

Note: Don’t forget to call defer resp.Body.Close() after a successful Get or Post.

The following is an example of using DefaultClient. Let’s start by creating a special http server.

We see that the “difference” of the http server is that it does not reply to the http answer in a hurry, but 10 seconds after receiving the request. Here is the code of our http client side.

We see that the client above throws a panic, prompting: too many open file descriptors.

Let’s use a diagram to describe the situation in the above example. 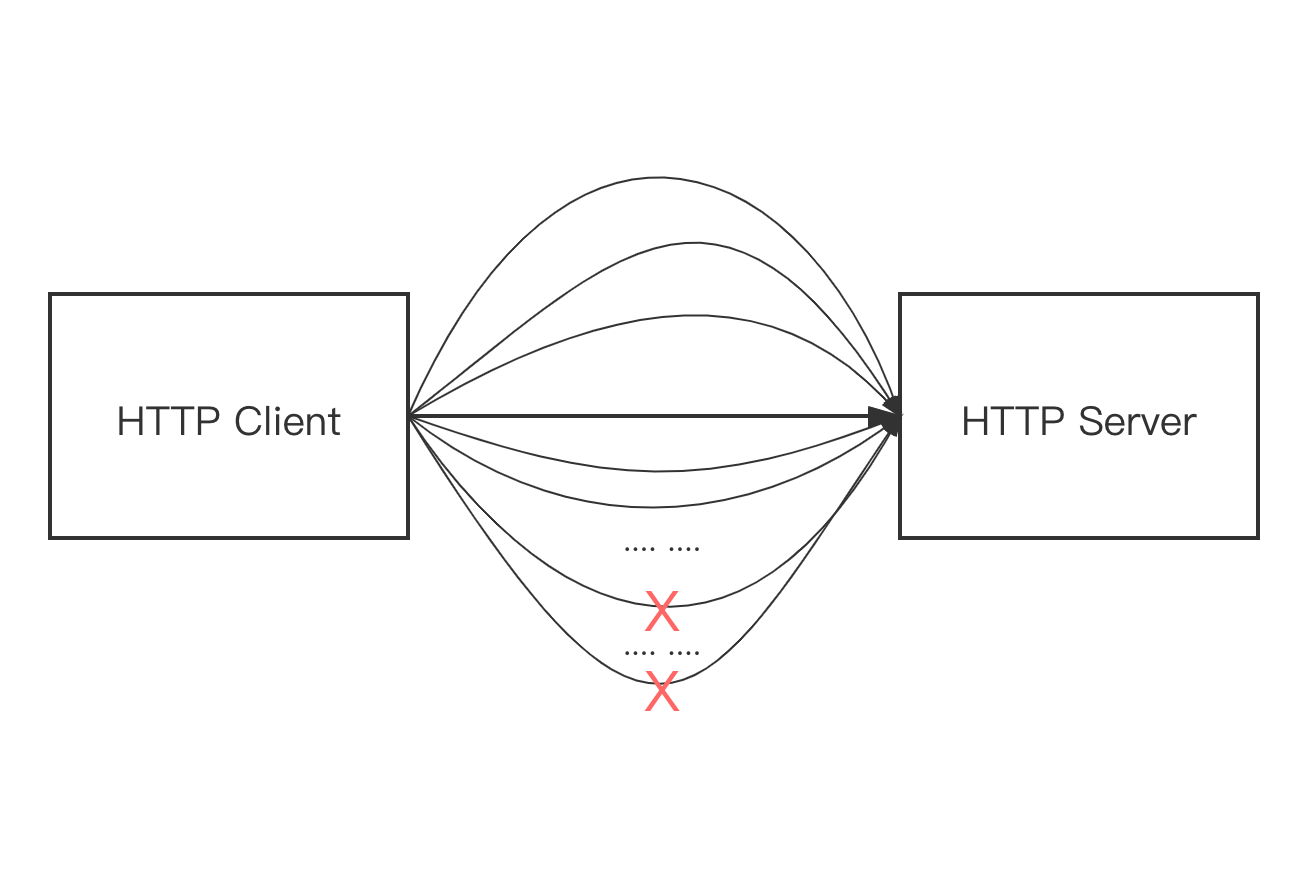 We know that by default, http clients maintain connections and reuse connections to services on the same host. However, due to the context of the server’s 10s delayed reply in the above example, the client does not wait for the reply to come back by default, but tries to establish a new connection to send a new http request. Since the sample runtime environment allows a maximum of 256 open file descriptors per process, a “socket: too many open files” error occurs when the client establishes a connection to the server at a later stage.

So how do we control the behavior of the client to avoid completing client-sending tasks in resource-constrained contexts? We do this by setting the relevant properties of http.DefaultClient, but DefaultClient is a package-level variable that is shared throughout the application, and once its properties are modified, other packages that use the http default client will also be affected. Therefore a better solution would be to define an instance of the http client for a small range of applications.

Equivalent to the following code.

3. customize the maximum number of connections to a particular host

So, how does http.Client control the maximum number of connections to a particular host? The Client structure of the http package is as follows.

However, in this DefaultTransport “configuration”, there is no setting for the maximum number of connections to a particular host, because in the Transport structure, the field that plays this role is MaxConnsPerHost.

Let’s transform the above example.

Instead of using DefaultClient, the above code customizes a new Client instance and sets the Transport field of that instance to our new Transport instance with the MaxConsPerHost field set. Start the server and execute the above client.go, we see the following result from the server side.

The http.Transport maintains a counter to each server host connsPerHost and a request waiting queue.

The Transport structure uses a connectMethodKey structure as the key.

We see that connectMethodKey uses a quadruplet (proxy, scheme, addr, onlyH1) to uniquely identify a “host”. Usually for a Client instance, proxy, scheme and onlyH1 are the same, but the difference is the addr (ip+port), so in effect it is the host that is differentiated by addr. Let’s also use a diagram to illustrate this situation. 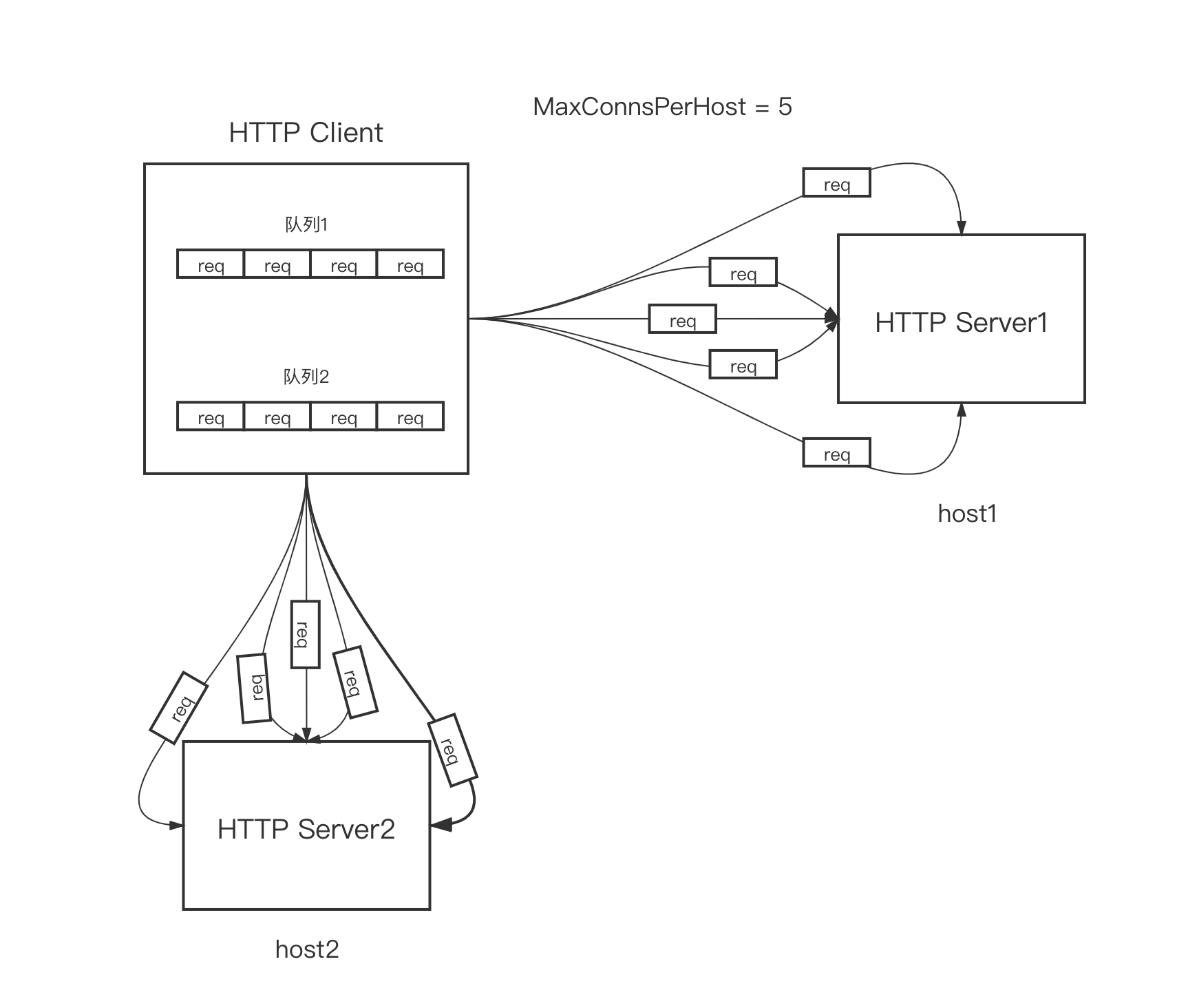 4. set the size of the idle pool

I wonder if you think about this point: when the five links to a host in the above example are not so busy, is it not a waste of resources to keep the five links? At least the client port and the server’s file descriptor resources are used up. Can we make the client reduce the number of links it keeps to the server during idle time? We can do this with the MaxIdleConnsPerHost field in the Transport structure type.

In fact, if you do not explicitly set MaxIdleConnsPerHost, the http package will also use its default value (2).

Let’s use an example to verify this behavior of http.Client!

First, we change the behavior of the server side from “wait 10s” to an immediate answer.

As for the client, we need to elaborate a bit.

We first create a busy sending behavior (21~32 lines), so that the client side to build a full 5 connections; then wait for 10s, that is, let the client idle; after that, then build 5 groutines to send requests to the server side at the rate of one per second (not busy rhythm), let’s see the output of the server side after the program runs.

The following is a diagram of the example in this section. 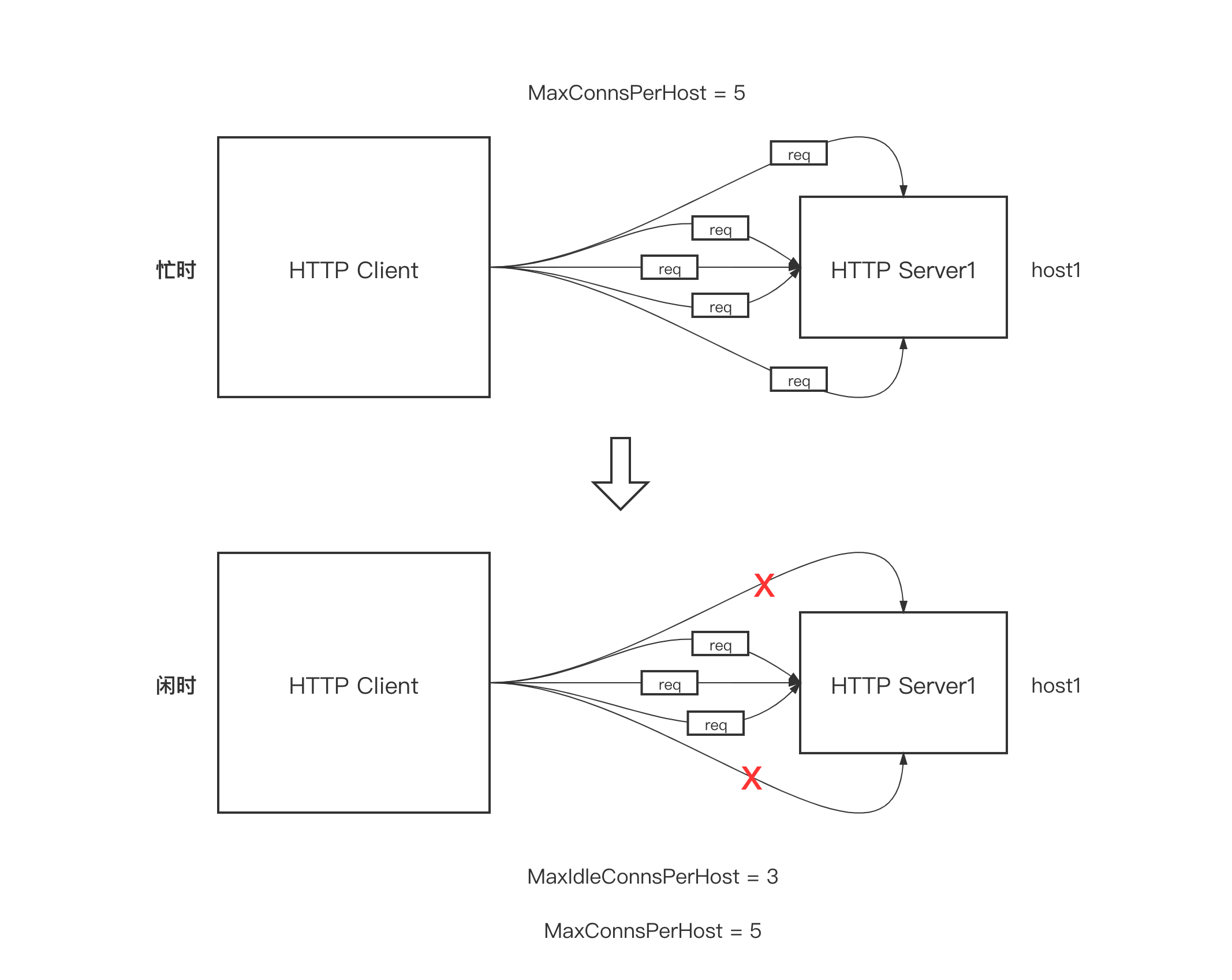 Unlike MaxIdleConnsPerHost, which is only for a particular host, MaxIdleConns is the sum of all connections in the idle pool for the entire Client, and this sum cannot exceed MaxIdleConns.

5. Clear connections in the idle pool

If you feel that the idle pool timeout cleanup will still take up “resources” for a little while, you can use Transport’s DisableKeepAlives to make each request create a new connection, i.e., not reuse the keep-alive connection. Of course, the loss of frequent new connections when the control is set to busy is greater than taking up some “resources”. For an example, see http://github.com/bigwhite/experiments/blob/master/http-client/client-with-disablekeepalives, which I won’t post here.

In addition, the server’s behavior of waiting 10s for an answer as in the example at the beginning of this article is not acceptable to all clients. In order to limit the answer to return in time, the client can set a timeout to wait for an answer, and if the timeout expires, the client will return a failure. http. Examples can be found at http://github.com/bigwhite/experiments/blob/master/http-client/client-with-timeout, which is also not posted here.