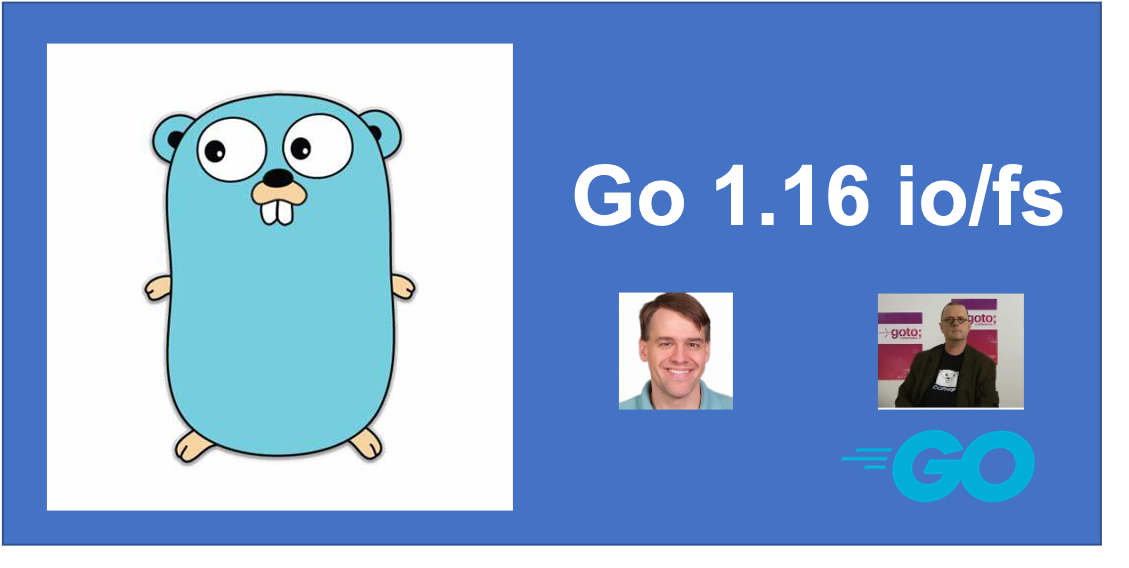 The Go language’s interfaces are one of Gopher’s favorite syntactic elements. Their implicit contract satisfaction and “only currently available generic mechanism” qualities make them a powerful weapon for combinatorial-oriented programming, and their existence provides the foundation for Go to build abstractions of things, as well as being the primary means of doing so.

One of the most successful interface definitions in the Go language since its inception is the io.Writer and io.Reader.

These two interfaces establish a good abstraction of data operations in data sources, through which we can read or write any data source that satisfies both interfaces.

io.Reader and io.Writer abstractions are inextricably linked to the deep Unix background of the original Go core team, which was probably influenced by the design philosophy that “in UNIX, everything is a stream of bytes”.

Unix has another design philosophy: Everything is a file, that is, in Unix, any device with I/O, whether it is a file, socket, driver, etc., has a corresponding file descriptor after the device is opened, and Unix simplifies the operation of these devices in the abstract file. The user only needs to open the file and pass the obtained file descriptor to the corresponding operation function, and the OS kernel knows how to get the specific device information based on this file descriptor, which hides the details of reading and writing to various devices internally.

But for some unknown historical reason, the Go language doesn’t have abstractions for files and file systems built into the standard library! We know today that os.File is a concrete struct type, not an abstract type.

The only field in the structure os.File, the file pointer, is also an OS-related type. Let’s take os/file_unix.go as an example. In unix, file is defined as follows.

Rob Pike, the father of the Go language, is upset that os.File was not defined as an interface in the first place. 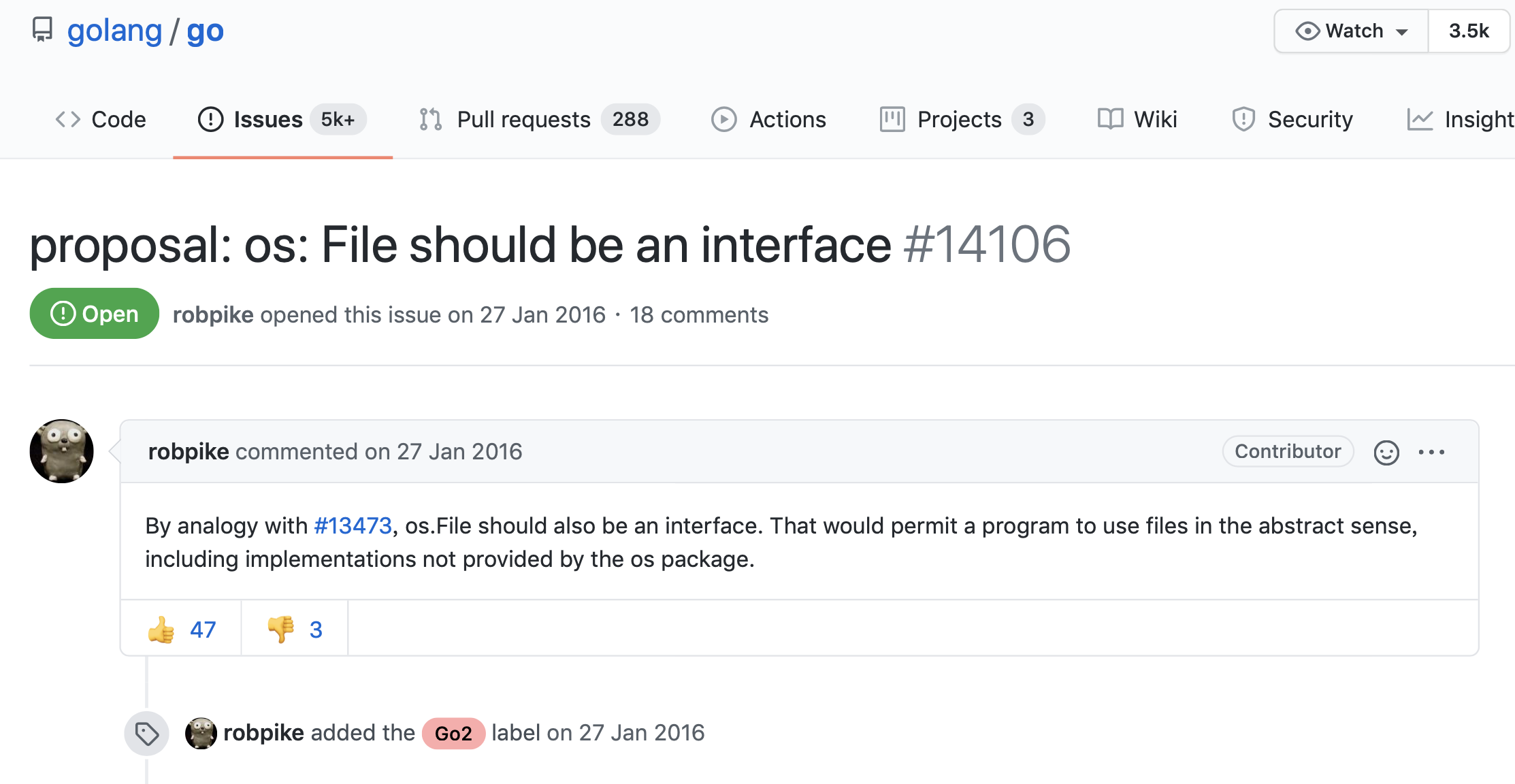 But as Russ Cox commented in the above issue: “I guess I would think io.File should be the interface, but that’s all moot now”.

But during the design of the embed file feature in Go 1.16, the Go core team and the Gopher’s involved in the discussion decided that introducing an abstraction of the File System and File would benefit Go code as much as io.Reader and io. So Rob Pike and Russ Cox took it upon themselves to complete the design of io/fs.

The addition of io/fs was not “spur of the moment”, as the need for an abstract file system interface was raised and implemented many years ago with the godoc implementation. 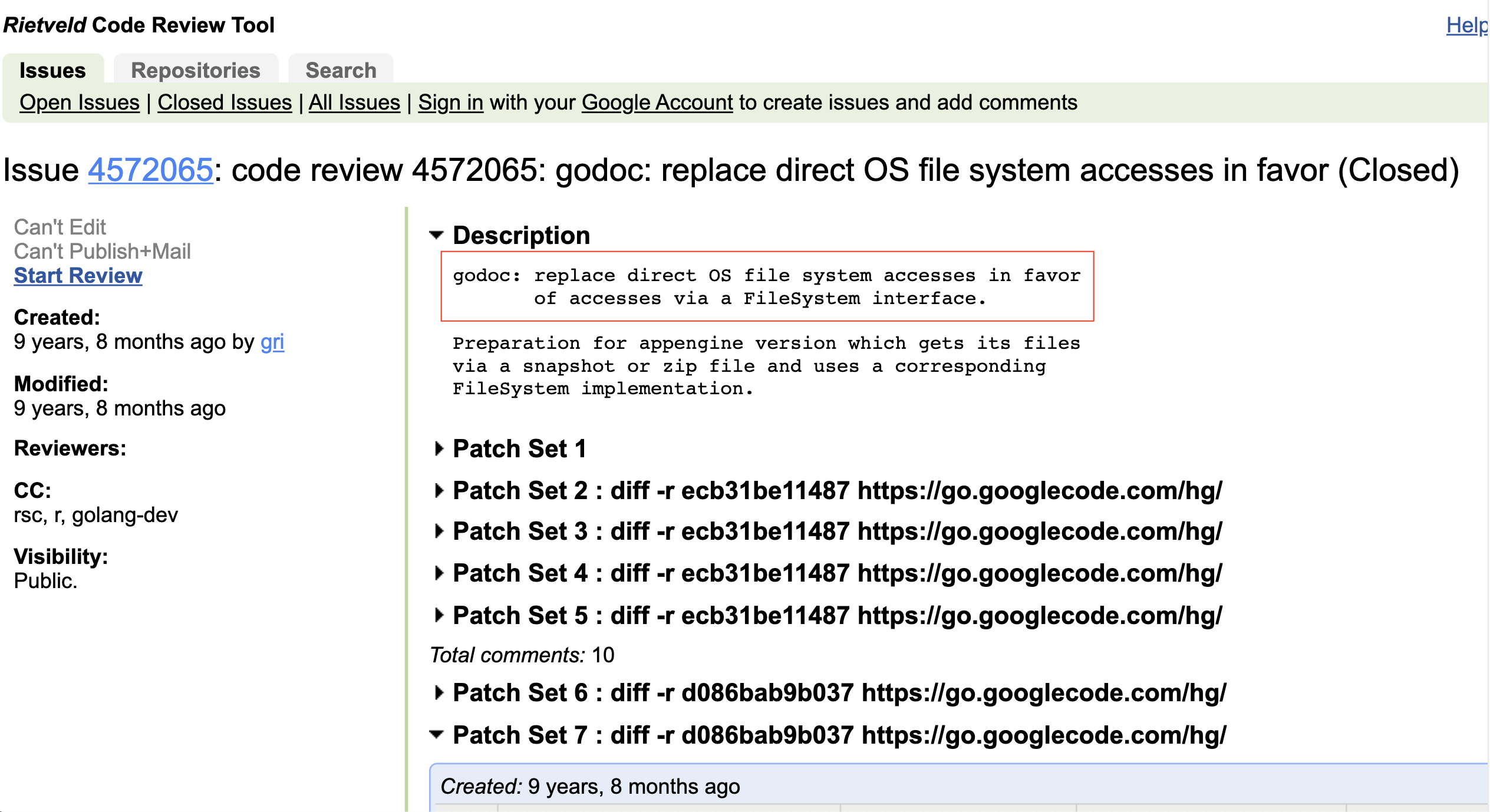 This final implementation has been available for a long time in the form of the vfs package of the godoc tool. Although its implementation is somewhat complex and not sufficiently abstract, it is an important reference for the io/fs package design.

Go’s abstraction of file systems and files is grounded in the FS interface type and the File type in io/fs. The design of these two interfaces follows Go’s consistent “small interface principle” and conforms to the open-close design principle (open to extensions and closed to modifications).

The FS interface represents the minimal abstraction of the virtual file system, which contains only one Open method; the File interface is the minimal abstraction of the virtual file, containing only the three common methods needed to abstract a file (and no less). We can extend these two interfaces by way of Go’s common embedded interface types, just as io.ReadWriter is based on an extension of io.Reader. In this design proposal, the authors also name this approach as extension interface, where one or more new methods are added to a basic interface type to form a new interface. For example, the following extension interface type StatFS is based on the FS interface. 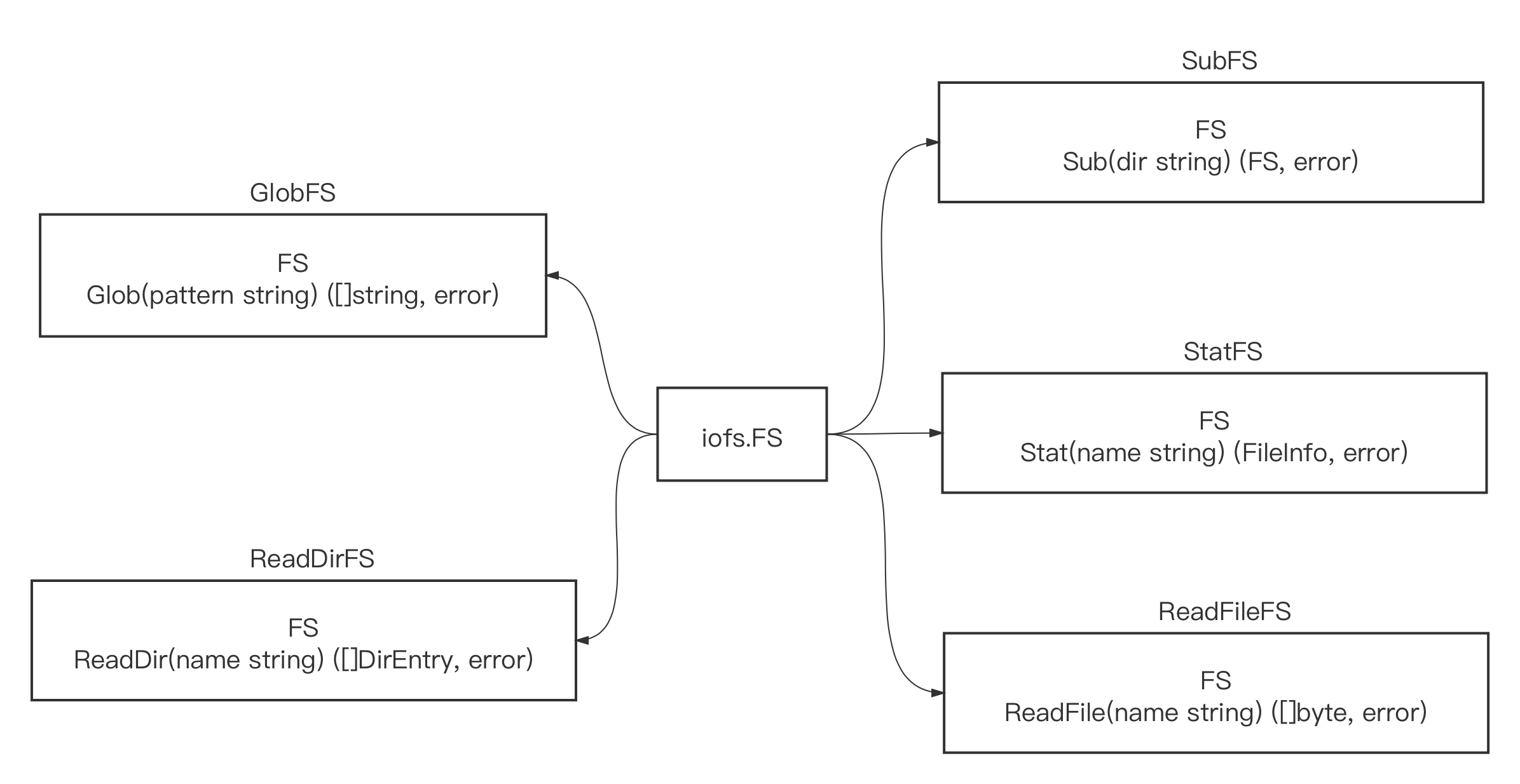 Take the ReadDirFS interface of the fs package as an example.

We see that along with ReadDirFS, the standard library also provides a helper function: ReadDir . The first parameter of this function is a variable of the FS interface type. In its internal implementation, ReadDir first determines whether the incoming fsys implements ReadDirFS by type assertion, and if it does, it directly calls its ReadDir method; if it does not, it gives the regular implementation. Several other FS extension interfaces also have their own helper function, which is a Go convention. If you are implementing your own FS extensions, don’t forget this convention: give the helper function that accompanies your extension interface.

Some packages in the standard library that involve virtual file systems were adapted to io/fs in Go 1.16, such as: os, net/http, html/template, text/template, archive/zip, etc.

Take http.FileServer as an example. Before Go 1.16, a static file server was generally written like this

After the Go 1.16 http package has adapted the FS and File interfaces to fs, we can write it like this.

The new DirFS function added to the os package returns an implementation of fs.FS: a File System consisting of a file tree rooted by the incoming dir.

We can refer to DirFS to implement a goFilesFS implementation that returns only files with the .go suffix.

In the above GoFilesFS implementation.

With the GoFilesFS implementation in place, we can then pass it to http.FileServer.

By opening the localhost:8080 page through a browser, we can see a file tree consisting of only go source files!

With the addition of the abstraction of the file system and files in Go 1.16, we can use io/fs to improve the testability of such code when we are dealing with file-related code in the future.

This function finds the paths of all go source files under dir and puts them in a []string to return. We can easily give the first version of the following implementation.

This version of the implementation uses filepath’s Walk function directly, which is tightly bound to the os package, i.e. to test this function, we need to construct a real file tree on disk, like the following.

Following the go convention, we [place the external data files for the test dependencies under testdata. Here is the test file for the above function.

The first version of the FindGoFiles function’s design was clearly less testable, requiring a dependency on a specific layout of files on disk, although testdata was also submitted to the code repository as source.

With the io/fs package, we use the FS interface to improve the measurability of the FindGoFiles function a bit, and we redesign the function.

This time we add a parameter fsys of type fs.FS to FindGoFiles, which is the key to unlocking the function from the specific FS implementation. Of course the test method of demo1 is also applicable to this version of the FindGoFiles function.

Since FindGoFiles accepts fs.FS type variables as parameters, making it significantly more testable, we can construct test scenarios by code without the need to construct complex and variable test scenarios on real physical disks.

The addition of io/fs makes it easy to program interface-oriented, rather than to os.File as a concrete implementation. The addition of io/fs is not at all inconsistent, as if the package and its abstractions existed when Go 1.0 was released . This is the benefit of the implicit dependency nature of the Go interface, which makes it feel very nice!

The code covered in this article can be downloaded here.