Form, is an important syntax element in HTML markup language. A Form contains not only normal text content, markup, etc., but also special elements called controls. The user usually “completes” the form by modifying the controls (e.g., entering text, selecting menu items, etc.), and then submits the form data to the Web server as an HTTP Get or Post request.

In an HTML document, the standard format of a form is as follows.

When a Form is loaded into the browser, it will appear as a form, and after entering text in each of the two text boxes (or using the default text as input) and clicking “submit”, the browser will send an HTTP request to http://localhost:8080. The HTTP request will take the input text of the form as the Query String Parameter (in this case ?language=go&since=monthly ) because the method property of the Form is get. After the request is processed on the server side, an HTTP-bearing response is returned, which is received by the browser and rendered in the browser window in a specific style. The above process can be summarized in the following diagram.

What is the difference between the http request sent by a Form form changed to post when it is clicked and submitted and the request when method=get? The difference is that in the case of method=post, the parameters of the form are no longer placed in the request URL as query string parameters, but are written to the HTTP BODY. Let’s summarize this process in a diagram as well.

Since the form parameters are placed in the HTTP Body for transmission (the data in the body is: language=go&since=monthly ), we will find a new header field in the headers of this HTTP request: Content-Type, which in this example has the value application/x-www-form-urlencoded. We can use the enctype attribute in the Form to change the content encoding type of the data transmitted by the Form, the default value of which is application/x-www-form-urlencoded (i.e. key1=value1&key2=value2&… of the form). form). Other optional values for enctype include.

The form parameters of the Form with method=get are put into the http request as query string parameters, which makes its application scenarios relatively limited, for example.

Therefore, the method=post form is more advantageous in these cases. When the enctype is a different value, the form with method=post transmits data in the http body in the following form. 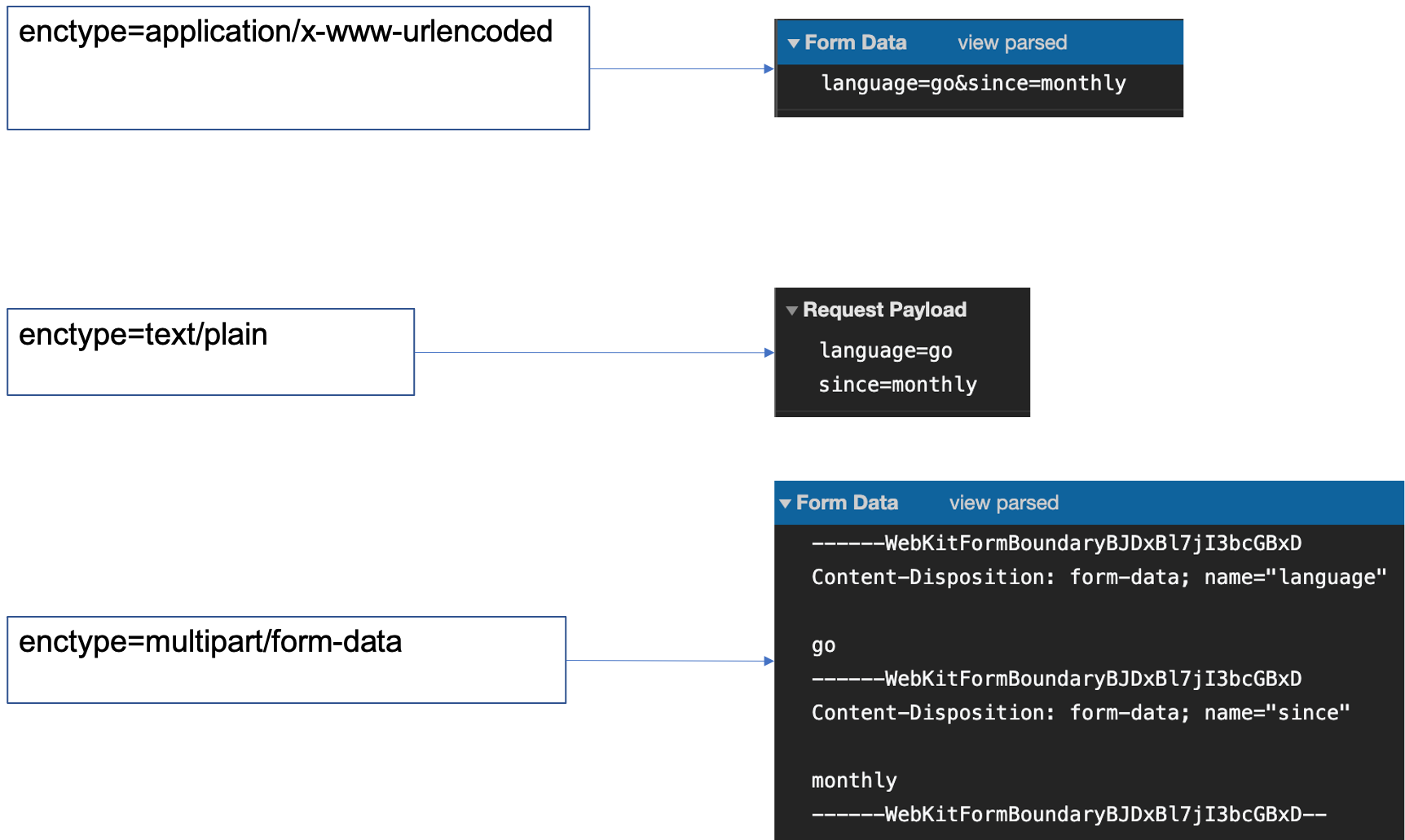 We see: when enctype=application/x-www-urlencoded, the data in the Body is presented in the form of key1=value1&key2=value2&…, similar to the combined presentation of the query string parameters of the URL; when enctype=text/ plain, this encoding format is also called raw, which means that the data content is transmitted in the Body as it is, keeping the original encoding of the data (usually utf-8); and when enctype=multipart/form-data, the data in the HTTP Body is presented in the form of multipart (part), and the paragraphs are separated by The specified random string is also passed to the server along with the HTTP Post request (placed in the value of Content-Type in the Header, separated from multipart/form-data by a semicolon), e.g.

Let’s look at a diagram of a slightly more complex enctype=multipart/form-data example. 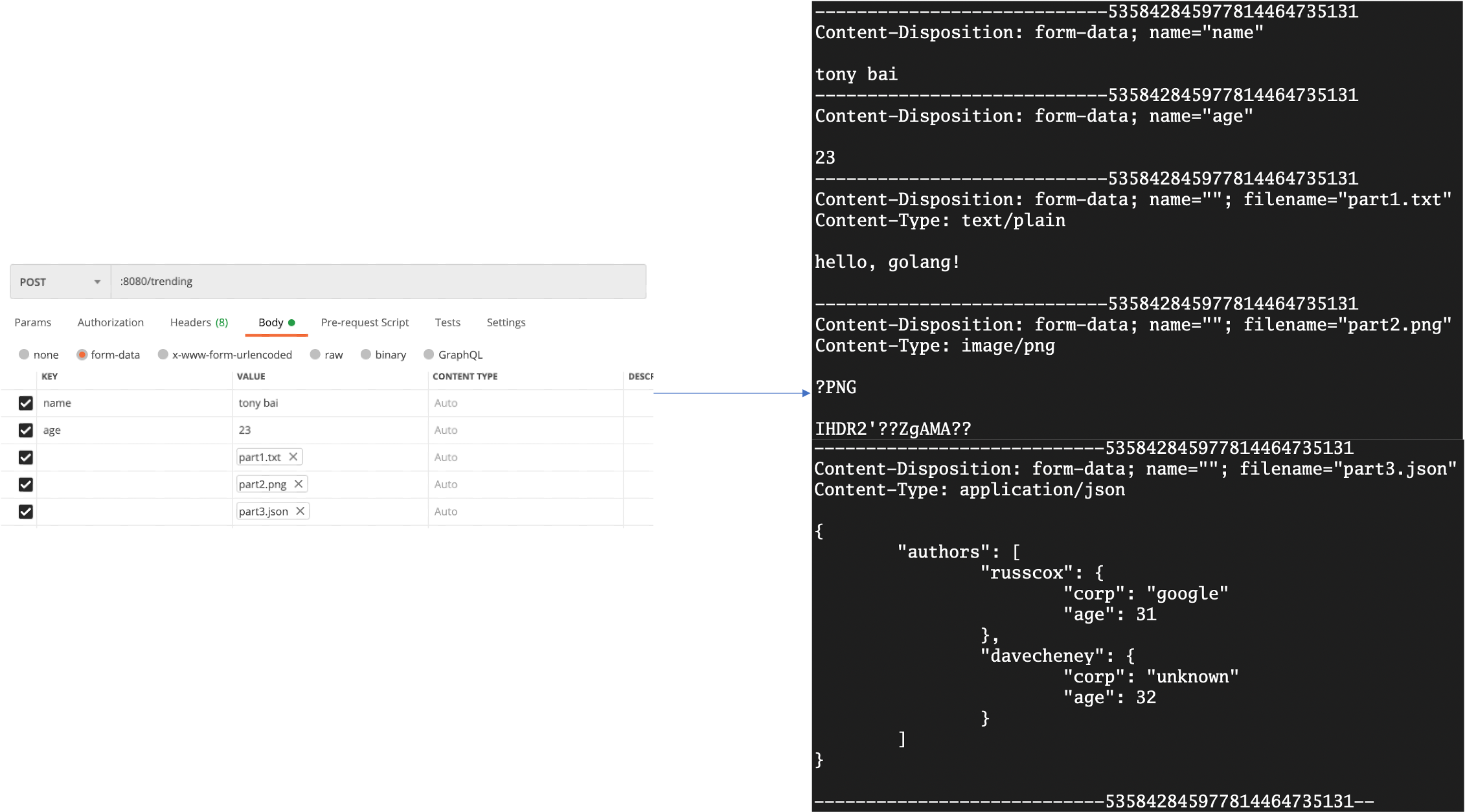 We use Postman to simulate a Post request with five segments (parts), including two text segments (text) and three file segments, and the three files are in different formats, txt, png, and json, respectively. Postman uses the Content-Type in each segment to specify the type of data content for that segment. When the server receives the data, it can parse the segmented data in a targeted manner according to the segment Content-Type indication. The default Content-Type of a file segment is text/plain; for unrecognized file types (e.g., no extension), the Content-Type of a file segment is usually set to application/octet-stream.

Uploading files via Form is a capability given to html by the RFC1867 specification, and it has proven to be very useful and widely used, even we can directly use multipart/form-data as HTTP Post body a data carrying protocol to transfer file data between the two ends.

http.Request provides the ParseMultipartForm method to parse data transferred in multipart/form-data format. Parsing is the process of mapping data into the Request structure’s MultipartForm field.

Multipart.Form represents a parsed multipart/form-data Body with the following structure:

We see that this Form structure consists of two maps, one map holds all the value parts (like name, age) and the other map holds all the file parts (like part1.txt, part2.png and part3.json). value part collection There is nothing to say, the key of the map is the “name” of each value part; our focus is on the file part. Each file part corresponds to a set of FileHeader, and the structure of FileHeader is as follows.

The FileHeader for each file part contains five fields.

We can represent the data mapping process implemented by the ParseMultipartForm method as the following diagram, which looks more intuitive.

We can upload two files part1.txt and part3.json to the above file server at the same time using Postman or the curl command below.

The output log for running the file upload server is as follows.

Then we can see: the file upload server successfully stored the received part1.txt and part3.json in the upload directory under the current path!

The previous clients for file uploads are either browsers, Postman or curl, but if we want to build our own client that supports uploading files in multipart/form-data format, how should we do it? We need to construct the body of the HTTP request in multipart/form-data format. Fortunately, with the mime/multipart package provided by the Go standard library, we can easily build a body that meets the requirements.

Obviously the core of the above client-side code is the createReqBody function.

We use this client to upload a file to the previous server that supports uploading files in multipart/form-data format.

We see that the text file hello.txt was successfully uploaded!

4. Customize the header in the file segment

From the output of file_server1 above, the Content-Type set by client1 in the file segment (part) is the default application/octet-stream when uploading files. Sometimes, the server side may need to do sorting according to this Content-Type and needs the client to give the exact value. In the client1 implementation above, we use the method multipart.Writer.CreateFormFile to create the file part.

The following is the code for the implementation of the CreateFormFile method in the standard library.

We customize the header part of the file part by textproto.MIMEHeader instance, then call CreatePart based on this instance to create the file part, after that we write the file content of hello.txt to the header of this part.

We run client2 to upload the hello.txt file, and on the file_server side, we can see the following log.

We see that the value of Content-Type of file part has changed to text/plain which we set.

In this scenario, we create a read and write pipeline through the io.Pipe function, the write side of which is passed to multipart.NewWriter as an instance of io.Writer, and the read side is returned to the caller for use in building the http request. io.Pipe is based on the channel implementation and does not maintain any internal memory cache.

When the reader returned via Pipe reads the data in the pipe, if no data has been written to the pipe yet, the reader blocks there as if it were reading the channel. Since the http request is sent (client.Do(req)) before it actually reads the Body data based on the reader passed in when constructing the req, the client will block on the read of the pipe. Obviously we can’t put both the read and write operations in one goroutine, that would cause a panic as all goroutines would hang. in the client3.go code above, the function createReqBody creates a new goroutine internally, putting the real work of building the multipart/form- data body in the new goroutine. The new goroutine will eventually write the data of the file to be uploaded to the pipeline via the pipeline write side.

And this data will also be read by the client and transferred out over the network connection. The implementation of io.Copy is as follows.

io.copyBuffer internally maintains a small buffer of 32k by default, which tries to read a maximum of 32k of data from src at a time and writes it to dst until it is finished. This way, no matter how big the file to be uploaded is, we actually only have 32k of memory allocated for each upload.

Here is the log of our upload of a file of size 252M using client3.go.

CopyBuffer instead of io.Copy if you feel that 32k is still very large and you want to use a smaller buffer for each upload.

You will see that although the upload is successful, its time consumption for uploading increases a lot for large files because only 1k data can be read per read.

The principle of the client-side multipart/form-data based file download process is the same as the above file_server1 receiving client-side file uploads, so here the Go implementation of this function is left as “homework” to you readers :).