This article breaks down the content of Go timers. Timers are an important part of business development and infrastructure development, so you can see how important they are.

AfterFun to initialize a timer, the timer will eventually be added to a global timer heap, which is managed by Go runtime.

Go 1.14 onwards has seen a quantum leap in timer performance, but along with that, timers have become the most complex and difficult data structures to sort out in Go. In this article, we won’t analyze every detail, but we’ll get a general idea of how the Go timer works.

Go timer is often encountered in our code.

2.1 Principle of the quadruple heap

A quadtree is actually a quadtree, how does the Go timer maintain a quadtree?

Remove timer from the heap.

2.2 How is the timer scheduled? 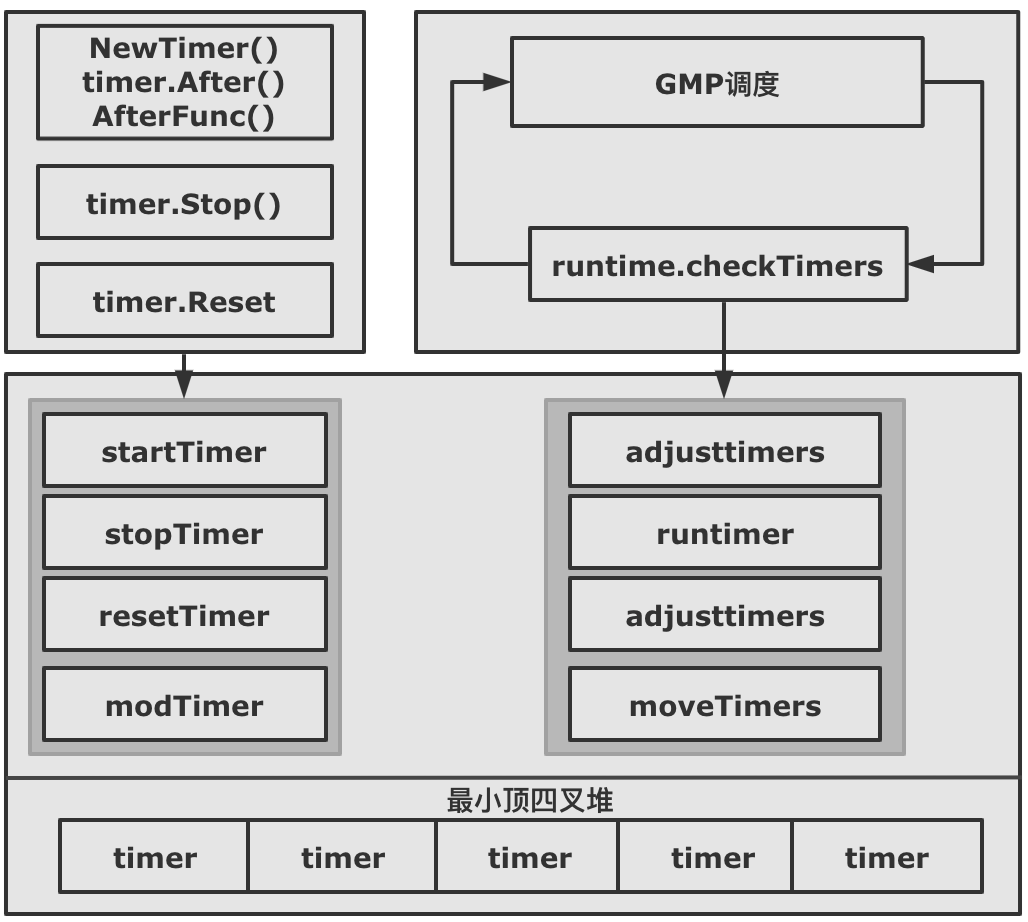 There are several ways to add timers to the scheduler.

2.4 How is the timer manipulated during Reset?

The purpose of Reset is to add the timer back to the timer heap and wait for it to be triggered again. However, there are two cases. 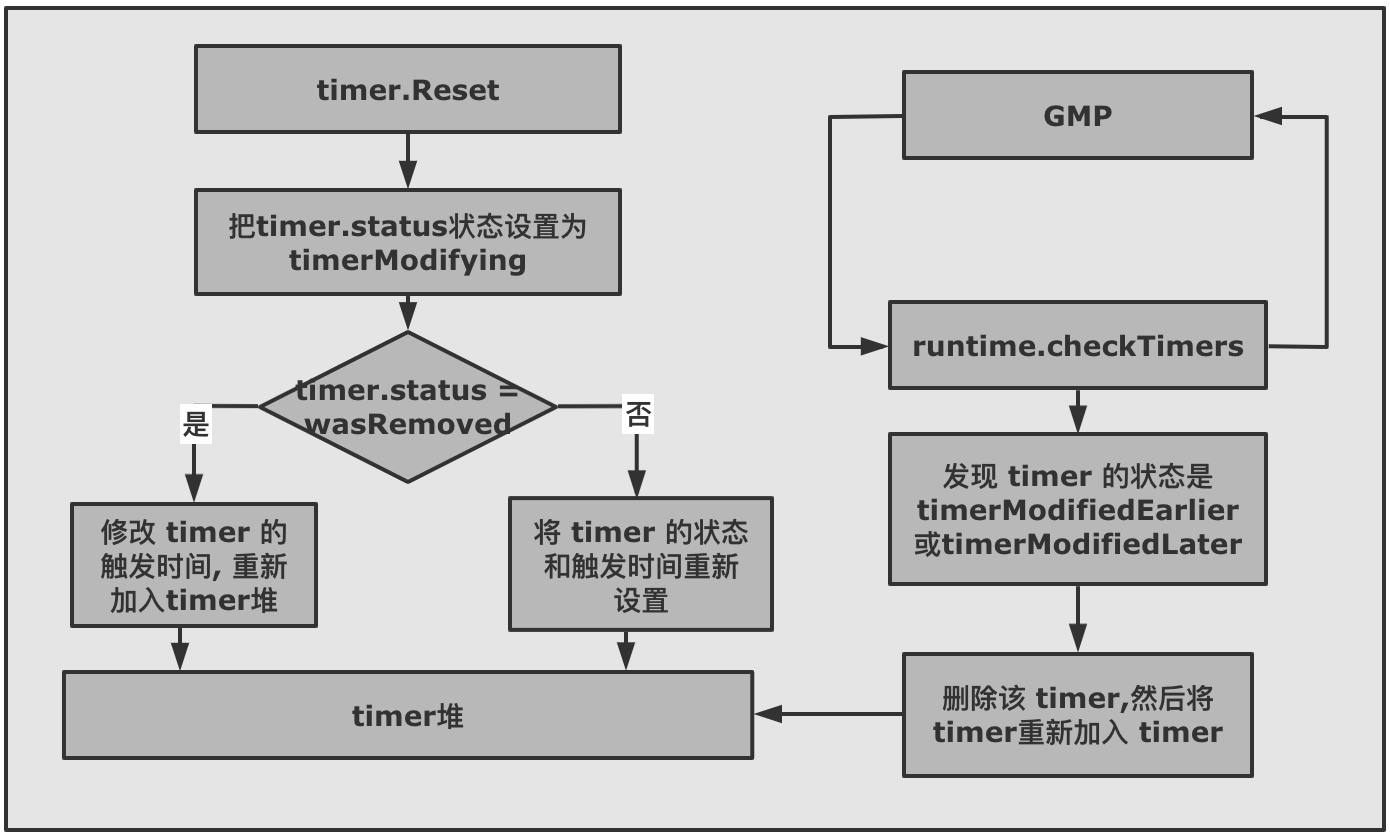 2.5 How is the timer manipulated when stopped?

Stop is used to stop the timer from being triggered, i.e. to remove it from the timer heap. Stop does not actually delete the timer from p’s timer heap, it just changes the timer’s state to timerDeleted and waits for the GMP-triggered adjusttimers or runtimer to execute.

The functions that actually delete timers are two dodeltimer, dodeltimer0. 2.6 How is the timer actually executed?

The real executor of a timer is GMP. GMP calls timer.runtimer() with runtime.checkTimers during each scheduling cycle. timer.runtimer checks all timers on that p’s timer heap to see if they can be triggered.

If the timer can be triggered, a callback function sendTime will send a current time to the timer’s channel C, telling us that the timer has been triggered.

If it is a ticker, after it is triggered, it will calculate the next time to be triggered and add the timer to the timer heap again. 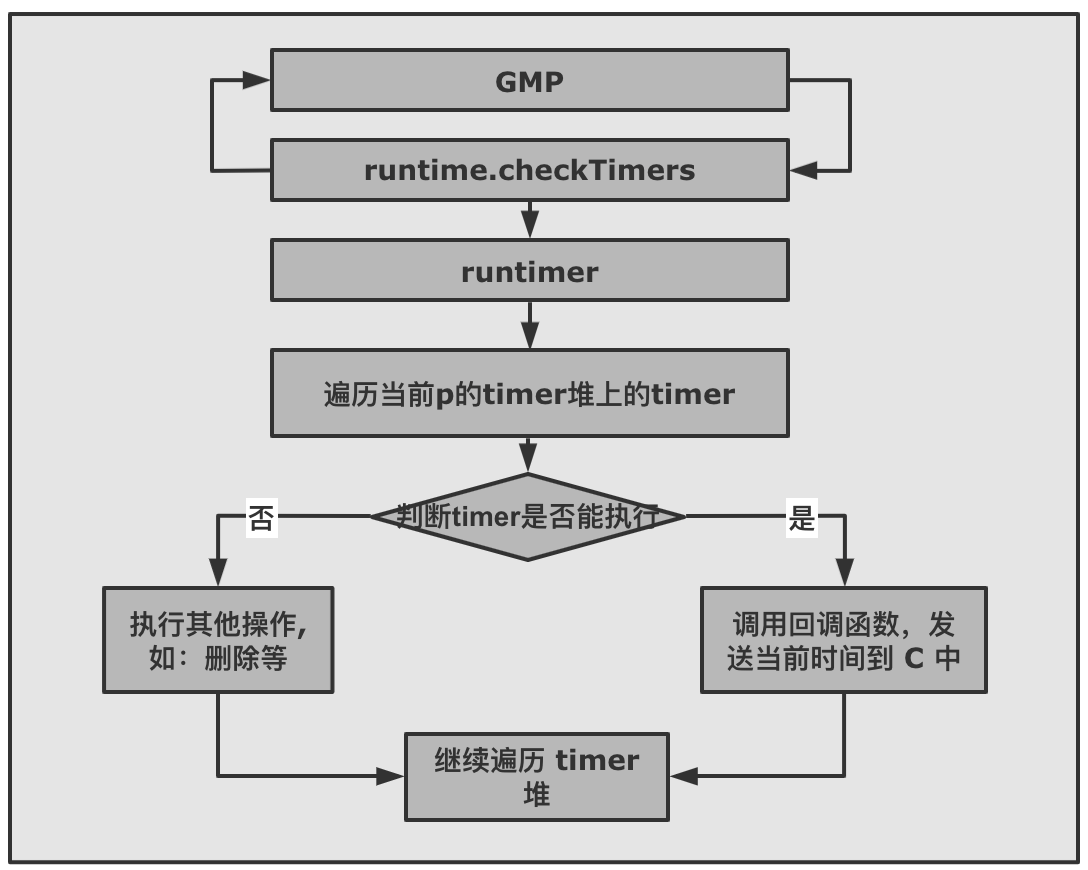 3. The pitfalls of timer usage

It’s true that timer is one of the more common tools we use in development, but timer is also one of the most likely culprits of memory leaks and CPU spikes.

However, a careful analysis shows that there are only two aspects that can cause problems.

3.1 Creating a lot of timers by mistake, resulting in wasted resources

The above code is the most common way of writing timer exceptions, and it is also the most easy to ignore.

After the underlying timer is a call to timer. NewTimer, after NewTimer generates a timer, it will put the timer into the global timer heap.

NewTimer will create tens of thousands of timers and put them into the timer heap, causing the machine memory to skyrocket and causing CPU exceptions as the GMP cycle checkTimers and inserting new timers will traverse the timer heap like crazy.

AfterFunc also generates timers to be added to the timer, which should also be prevented from being called in a loop.

Solution: Use time.Reset to reset the timer and reuse the timer.

We already know that time.Reset resets the timer’s trigger time and then adds the timer back to the timer heap, waiting to be called by the trigger.

The above code can be seen, only when the timer timeout “done” will output, the principle is very simple: the program blocks on <-timer1. C, and the program can continue to execute.

However, special care should be taken when using timer. For example.

Stop does not close channel C and keeps the program blocking on timer1.

If <- timer1.C was blocking in a subcoordinator and the timer was called with the Stop method, then the subcoordinator could be blocked forever, causing a goroutine leak and memory leak.

The correct way to use Stop.