I read an article earlier: Handling 1 Million Requests per Minute with Go.

Today I stumbled upon another article. The principle of the two articles is similar: there are a number of work tasks (jobs), through the work-pool (worker-pool) way, to achieve the effect of multiple worker concurrent processing job.

There are still many differences between them, and the differences in implementation are quite big.

Here is a picture, which is roughly the overall workflow in the first article.

The difference in this article is:

First the data will be aggregated from generate (produce data) -> concurrently process data -> process the result. The flowchart is roughly like this.

Then it can achieve the effect of controlling the work pool to stop working through context.context.

Finally, through the code, you will see that it is not a worker-pool in the traditional sense, as will be explained later. 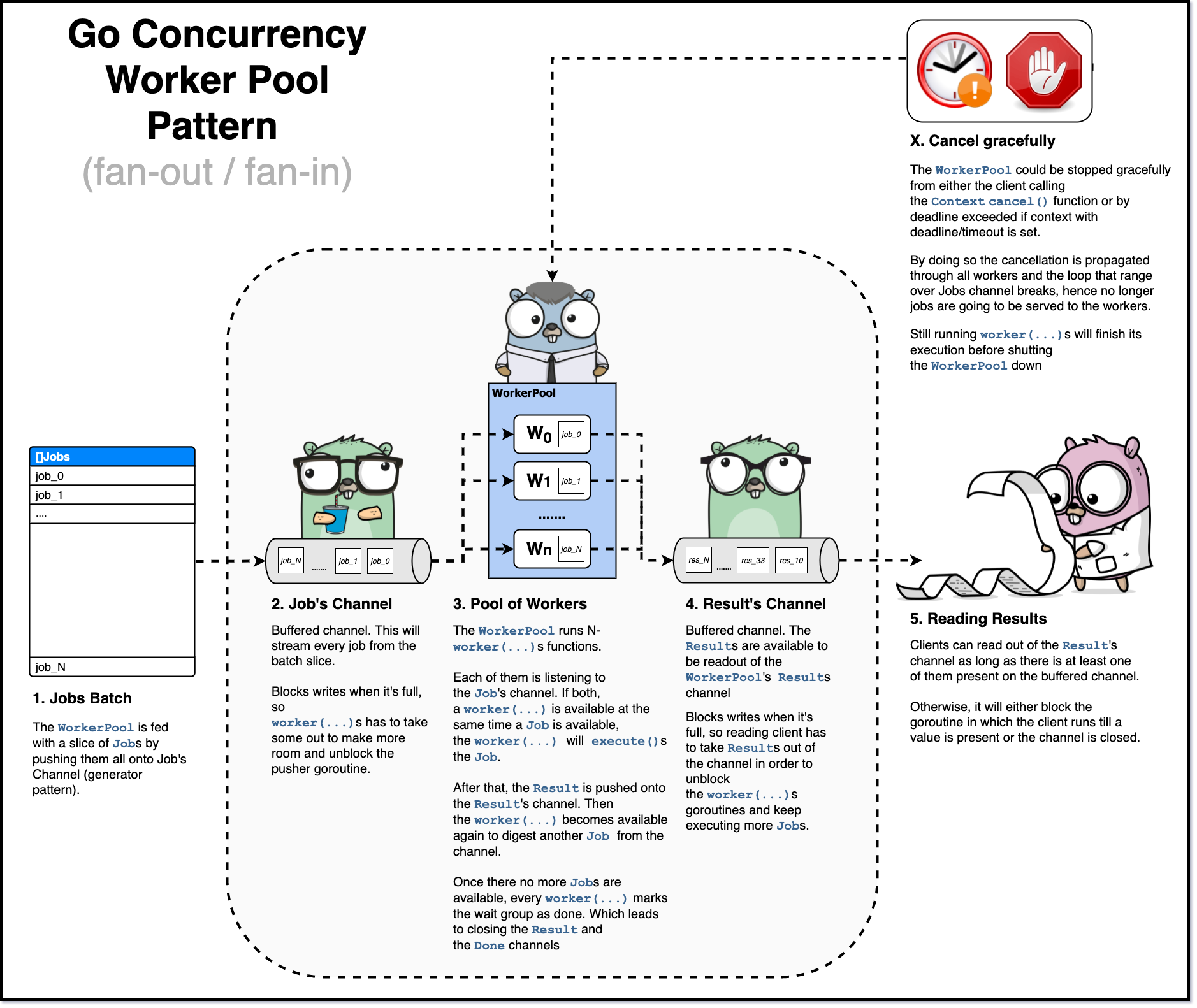 By the way, the code implemented in this article is much simpler than the code for Handling 1 Million Requests per Minute with Go.

This can be done briefly. Eventually each job will be wrapped into a Result after processing and returned.

The following section is the core code.

The entire WorkerPool structure is simple. jobs is a cache channel. Each task is put into jobs and waits to be processed by woker.

results is also a channel type, and its role is to hold the result Result of each job processing.

First initialize a worker-pool with New, and then execute Run to start running.

When initializing, we pass in the worker number, which corresponds to each g running work(ctx,&wg,wp.jobs,wp.results) , which forms the worker-pool. WaitGroup, we can wait for allworkerjobs to finish, which means that thework-pool` is finished, but of course it could be because the job processing is finished, or it could be stopped.

How does each job data source come from?

corresponds to the work of each worker.

Each worker tries to fetch data from the same jobs, which is a typical fan-out pattern. When the corresponding g gets the jobs for processing, it sends the result to the same results channel, which is another fan-in pattern. Contextallows us to do stop-run control for eachworker`.

Finally, there is the collection of processing results.

Then the overall test code is :

After looking at the code, we know that this is not a worker-pool in the traditional sense. It does not initialize a real worker-pool like the Handling 1 Million Requests per Minute with Go article, and once it receives a job, it tries to fetch a worker from the pool, give the corresponding job to the work for processing, wait for the work is processed, it is redirected to the work pool and waits to be utilized next time.