Recently, Twitter user Florian said: Microsoft has added some ads to the File Explorer in its Windows 11 Insider preview version.

As the screenshot shows, Microsoft uses such ads to promote other Microsoft products and “write confidently in documents, email and on the web with advanced writing suggestions from Microsoft Editor.

The old File Explorer was already a point of criticism for Windows, and Microsoft has worked hard to improve the ease of use and appearance of its default File Explorer, such as the recently added “tabs” feature that opens multiple folder tabs like a browser. However, as soon as the reviews improved, Microsoft added an advertising element to the File Explorer.

Note that the ads for File Explorer that appear above are in the Insider preview version of Windows 11, which enjoys the latest features and is not in sync with the official stable version. Although some users have said they have seen similar ads in the stable version of Win 11, I have repeatedly opened the system File Explorer several times in Stable Windows 11 and have not seen any ad recommendations. 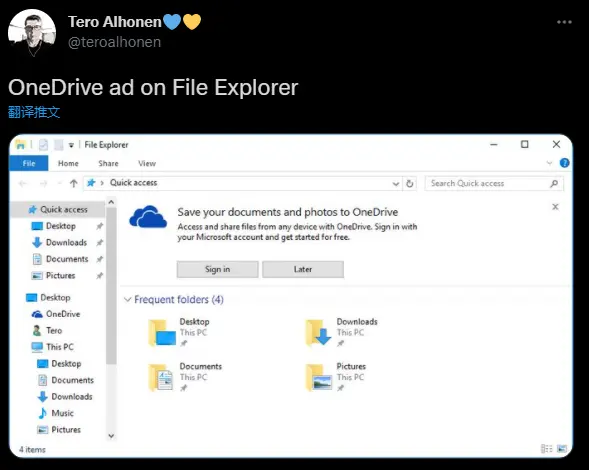 All in all, sandwiching ads in the default software of the OS is a common Microsoft trick, for example, two years ago Microsoft tested pushing ads for its free Office web app in the menu bar of the Windows 10 Writing Board app, but the campaign sparked user protests and was subsequently cancelled. In addition, Windows 10 used to show Microsoft Edge ads every time users searched/used competing browsers and prompted them to download a new Microsoft Edge.