In the era of cloud-native and microservices-dominated architectural models, there are only two types of communication protocols used for internal service interactions: HTTP API (RESTful API) and RPC. With today’s hardware configurations and network conditions, modern RPC implementations generally perform better than HTTP API. We compare json over http with gRPC(insecure), using ghz and hey stress test the gRPC and json over http implementations. The performance of gRPC (Requests/sec: 59924.34) is 20% higher than the http api performance (Requests/sec: 49969.9234). The codec performance of protobuf used by gPRC is measured to be 2-3 times of the fastest json codec, and more than 10 times of the Go standard library json package codec performance.

For performance-sensitive systems with few internal communication protocol changes, using RPC for internal services is probably the choice of most people. Although gRPC is not the best RPC implementation in terms of performance, it is naturally the most widely used by developers because it is backed by Google and is the only RPC project of the CNCF.

gRPC supports four communication modes, which are (the following four diagrams are taken from [the book “gRPC: Up and Running”])

Let’s take the most commonly used Simple RPC (also known as Unary RPC) as an example to see how to implement a gRPC version of helloworld.

We don’t need to write the helloworld.proto from scratch and generate the corresponding gRPC code ourselves. There is an official example of helloworld provided by gRPC, and we only need to modify it a little.

The IDL file helloworld.proto of the helloworld example is as follows.

You can refer to the grpc official documentation for an explanation of the specification of the .proto file, so I won’t go over it here. Obviously the above IDL is the ultimate simplicity. Here a service is defined: Greeter, which contains only one method SayHello, and the parameters and return value of this method are a structure containing only a string field.

We don’t need to execute the protoc command manually to generate the corresponding Greeter service implementation and HelloRequest and HelloReply protobuf codec implementation based on the .proto file, because gRPC has already placed the generated Go source file under example, we can refer to it directly. Note here that the latest grpc-go project repository adopts a multi-module management model, and examples exists as an independent go module, so we need to import it into its user’s project as a separate module. Take the gRPC client greeter_client as an example, its go.mod should be written like this

We also modified the two ends of the gRPC communication slightly. The original greeter_client only sends one request and then exits, here we change it to send requests every 2s (for easy follow-up), as shown in the following code.

After fixing go.mod and modifying client and server ok, we can build and run greeter_client and greeter_server.

The target parameter passed by greeter_client to DialContext during Dial server is a static service address.

We see that it passes the target.Endpoint, i.e. localhost:50051, directly to ClientConnection (r.cc in the above code), which will establish a tcp connection to this address. This corresponds to the name of the resolver: passthrough .

So how should we tell greeter_client to connect to these three instances? Is it possible to change the address to something like the following.

Let’s first design the target form to be passed to grpc.DialContext. For gRPC naming resolution, gRPC has special documentation on this. Here, we also create a new scheme: static, where the service addresses of multiple service instances are passed in via comma-separated strings, as in the following code.

When address is passed into grpc.DialContext as a real parameter to target, it is parsed by grpcutil.ParseTarget into a resolver. This structure contains three fields.

Next, gRPC will look for the corresponding Resolver Builder instance in the builder map of the resolver package based on the value of Target. So far none of the built-in resolver builders in gRPC can match the Scheme value. It’s time to customize a StaticResolver Builder!

The grpc resolve package defines the interface that a Builder instance needs to implement.

The Scheme method returns the scheme corresponding to this Builder, while the Build method is the real method used to build the Resolver instance, let’s look at the implementation of StaticBuilder.

Like Builder, grpc’s resolver package also defines the Resolver interface that each resolver needs to implement.

Note: The annotation of the resolver.Resolver interface requires that the ResolveNow method is to support concurrency safety, so here we implement synchronization via sync.

Since the number of service addresses and information on the service side are unchanged, there is no watch and update process here, but only the implementation of ResolveNow (and called in the Build method in the Builder), which updates the address set of the service instance in ResolveNow to ClientConnection(r.cc).

Next, let’s compile and run the client and server of demo2.

After executing for a while, you will find a problem in the logs on the server side, as shown in the following log.

There are clearly three addresses in our Service instance collection, why only server1 received the rpc request, the other two servers are in idle state? This is the client’s load balancing policy at work! By default, grpc selects the built-in “pick_first” load balancing policy for the client, i.e., it selects the first intance in the service instance set for the request. In this example, with the pick_first policy, grpc will always choose demo2-server1 to initiate the rpc request.

After recompiling and running greeter_client, we can see in the server test that the rpc requests are polled to each server instance.

Let’s use a diagram to sort out how the Builder and Resolver work.

The SchemeResolver in the diagram refers to a resolver that implements a particular scheme. as shown in the diagram, the steps of the service instance collection resolve process are roughly as follows.

With the above description of the Resolver principle, here is a simplified description.

First, like StaticResolver, let’s design the form of the target. nacos has the concept of namespace, group, so we will design the target as follows.

Specifically in our greeter_client, its address is

Next we look at NacosBuilder.

The process of the Build method of NacosBuilder is the same as StaticBuilder, first we also parse the incoming target’s Endpoint, i.e. “localhost:8848/public/group-a/demo3-service”, and store the parsed segments in the newly created NacosResolver instance. “The NacosResolver also needs one more piece of information, which is the connection to nacos. here we use initNamingClient to create a nacos client-side instance (call nacos provided go sdk).

An important implementation here is the doResolve method called by both ResolveNow and watch, which gets all instances of demo-service3 via SelectAllInstances in the nacos-go sdk and updates the resulting set of enabled(=true) and weight(weight) The set of legal instances that are not 0 is updated to ClientConn(r.cc.UpdateState).

In the watch method of NacosResolver, we subscribe to demo3-service and provide a callback function via the Subscribe method in the nacos-go sdk. This callback will be called whenever the instance of demo3-service changes. In this callback we can update the ClientConn based on the latest set of service instances passed back (services []model.SubscribeService), but here we reuse the doResolve method, i.e. we go to nacos again to get an instance of demo-service3.

Compile and run greeter_server under demo3.

After running greeter_server, we will see all instances of demo-service3 on the nacos dashboard.

Compile and run greeter_client under demo3.

Due to the round robin load policy, each server (with a weight of 1) on the greeter_server side will receive rpc requests equally.

At this point we can adjust the instance weight of demo3-service or take offline an instance through nacos dashboard, for example, take offline service-instance-2 (port 50052), after that we will see the greeter_client callback function executed, after that only the greeter_server side will instance-1 and instance-3 will receive rpc requests. After bringing service instance-2 back online, everything will be back to normal.

Here we take a custom Weighted Round Robin (wrr) balancer as an example, and see the steps to customize the balancer (we refer to the built-in implementation of round_robin in grpc-go) master/balancer/roundrobin)).

Similar to the resolver package, balancer is instantiated by a Builder (creation schema), and the Balancer interface of balancer is similar to resolver.Balancer.

As you can see, Balancer is much more complex than Resolver. gRPC’s core developers saw this and provided a package that simplifies the creation of custom Balancers: google.golang.org/grpc/balancer/base. gRPC’s built-in round_ robin Balancer is also based on the base package.

The base package provides NewBalancerBuilder to quickly return an implementation of balancer.

We see that this function takes one parameter: pb, which is of type PikcerBuilder, and this interface type is relatively simple.

Nested somewhat more, we use the following diagram to watch the creation and use process of balancer directly. 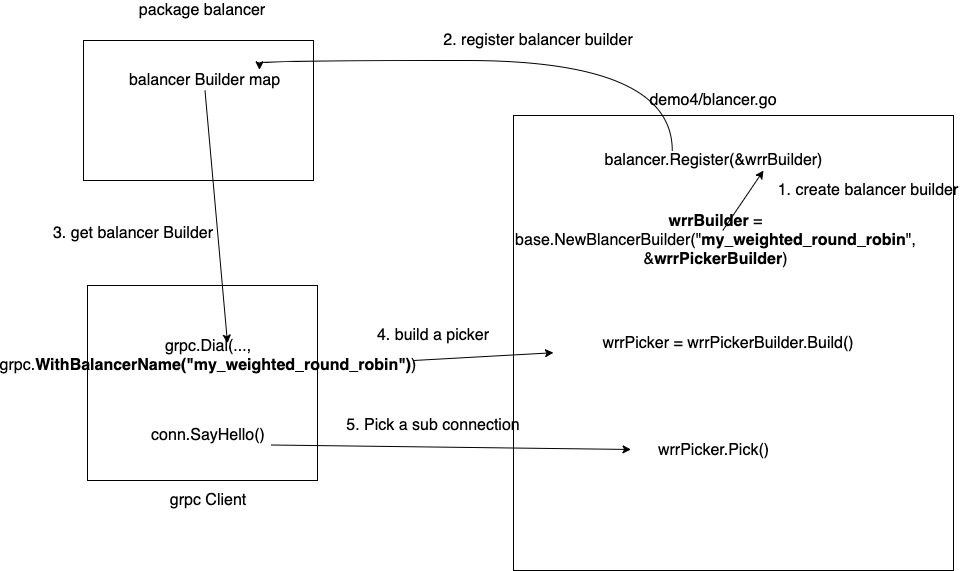 To recapitulate the general process.

Due to the weight values used, our resolver implementation needs to make some changes, mainly setting the weight of the service instance to the ClientConnection via Attribute in the doResolve method.

This is a simple Weighted Round Robin implementation, the weighting algorithm is very simple, if the weight of a conn is n, then add n conn in the weighted result set, so that in the subsequent Pick does not need to consider the weighting problem, just to the ordinary Round Robin as Pick out one by one.

After running demo4 greeter_server, we change the weight of instance-1 to 5 at nacos, and we subsequently see the following output.

In this article we have learned about the four communication modes of gRPC. We focused on the things to consider on the gRPC Client side in the most common simple RPC (unary RPC) mode, including.

The code in this article is for example use only and does not consider much exception handling.

All code involved in this article can be downloaded from here.