When you consider adding to your application based on the capabilities of Kubernetes, it’s like opening a Pandora’s Box, and you don’t know exactly what’s in that box, just as you don’t know what is, or will be, happening to the Kubernetes cluster and the applications on it that you rely on.

No matter what architecture is chosen and what runtime the underlying layer is based on, observability always has a very high priority. There is an argument that if you don’t know how to operate and maintain it, don’t try to deploy it. That’s a very down-to-earth way of thinking about the end in mind.

That said, if we embrace Kubernetes, what does the “observability” we’re looking for look like? For microservices architectures, I see a few areas as passing lines.

In short, it is: monitoring, logging, tracking, and Prometheus is a more mature solution in Kubernetes monitoring.

Prometheus is an open source monitoring and alerting system based on a temporal database, born from SoundCloud. prometheus works on the basic principle of periodically capturing the state of monitored components via the HTTP protocol, so monitored components only need to implement a compliant HTTP interface to access it. For components that do not provide an HTTP interface by default, such as Linux, MySQL, etc., Prometheus supports the use of an exporter to collect information and provide a metrics interface on behalf of the component. 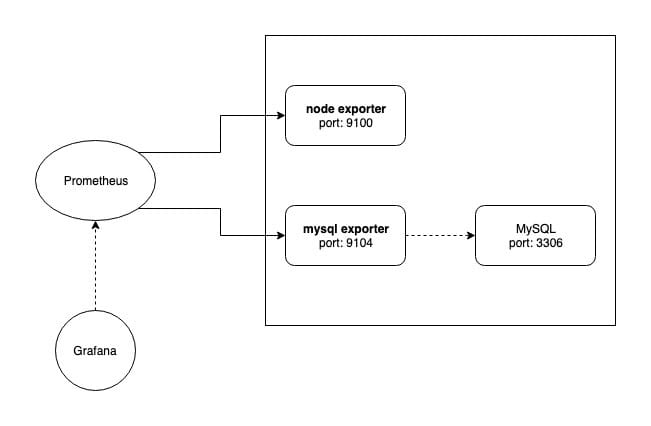 A post on SoundCloud’s blog briefly explains the Prometheus architecture and how it works. The article identifies four characteristics that Prometheus meets:

The first and the fourth are also features of the temporal database, but Prometheus does not have any additional storage built in by default for easy deployment and chooses to implement it itself. For the fourth feature Prometheus implements the PromQL query language, which enables powerful query rules.

With iterations of the release, Prometheus features have long been more than just that. 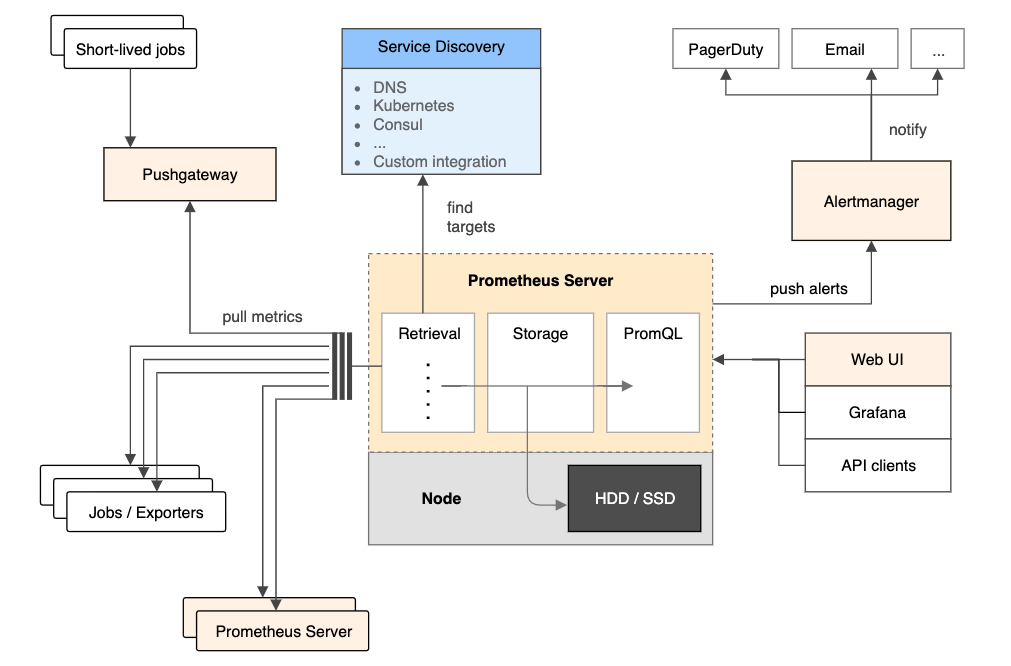 As you can see from the architecture diagram of Prometheus, there are 4 main components.

AlertManager and WebUI are not required components, the former can set alarms based on the collected data, and the latter can display monitoring data in real time by means of a web interface.

Prometheus can be deployed in a variety of ways, and thanks to its simple working principle, you only need to deploy Prometheus Server to an environment where you can access the monitored objects.

However, for K8s, because of the relatively closed network environment within the cluster and the volatile IP of Pods, CoreOS has opened source to manage and deploy Prometheus via Operator (CRD) (https://github.com/coreos/prometheus-operator).

Installing Prometheus Operator is as simple as going directly to the root of your Git repository and kubectl apply where the bundle.yaml is located.

The design concept of Prometheus Operator can be found in the document: https://github.com/coreos/prometheus-operator/blob/master/Documentation/design.md.

The Prometheus Operator listens for changes to the custom resource (CR) above and performs subsequent management logic, as shown in the diagram below. 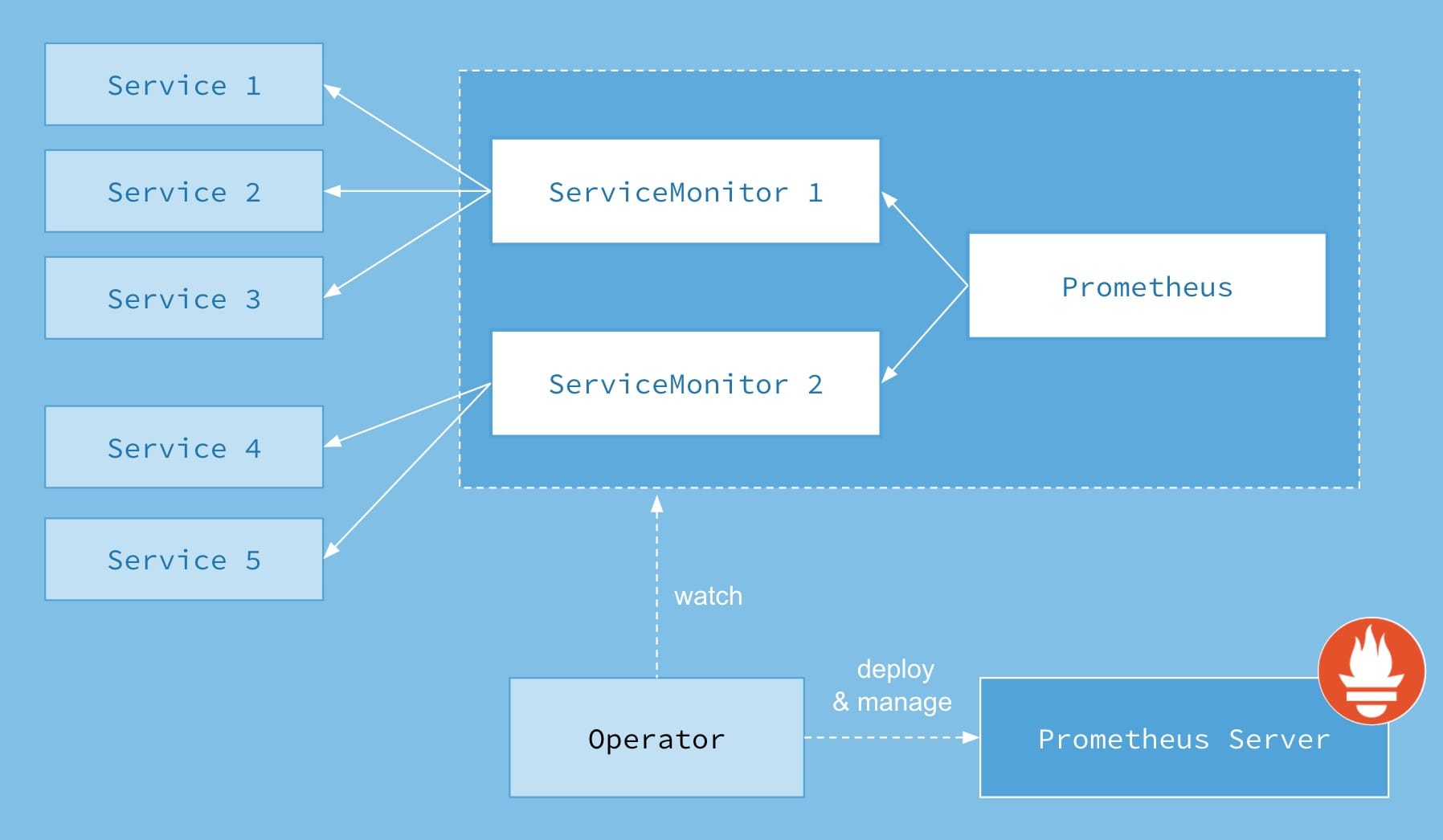 We briefly describe how to use prometheus-operator to monitor the application according to the official User Guides, more details can be found at: https://github.com/coreos/prometheus-operator/blob/master/Documentation/user-guides/getting-started.md.

Deploy an application with 3 copies via Deployment.

The Service is then created so that the service can provide a stable access portal.

Note that the label app=example-app is defined in Service, which is the basis for the selection of ServiceMonitor.

Based on the Label defined in the Service, we can define ServiceMonitor.

At this point it becomes clear that there are already prometheus instances being started.

prometheus itself provides the WebUI, so we can create SVCs that are exposed to access outside the cluster (it’s best not to do this in a public network environment).

At this point, you can see the monitoring information for the Demo application within the cluster. As you should understand from this custom demo, Prometheus is launching HTTP access to data via SVC, and cluster monitoring is simply giving Prometheus the ability to get the monitoring interface to Kubernetes components. Prometheus also supports the deployment of Node exporter in the form of DaemonSet to collect cluster node information directly.

The form of monitoring data collection for Kubernetes components depends on how the cluster is deployed. For binary deployments, you can install Prometheus directly on the Node and collect data; for container deployments, you can create an SVC for the Kubernetes component, and the subsequent operation is consistent with the monitoring of the cluster application. Related documentation can be found at https://coreos.com/operators/prometheus/docs/latest/user-guides/cluster-monitoring.html.