This article is based on reading the source code of Kubernetes v1.22.1

Kubelet allows nodes to be evicted if they are under-resourced. I have recently studied Kubelet’s eviction mechanism and found a lot to learn from it, so I’ll share it with you.

Kubelet’s eviction feature needs to be turned on in the configuration, and the threshold value for eviction needs to be configured.

The eviction signals that can be set are. 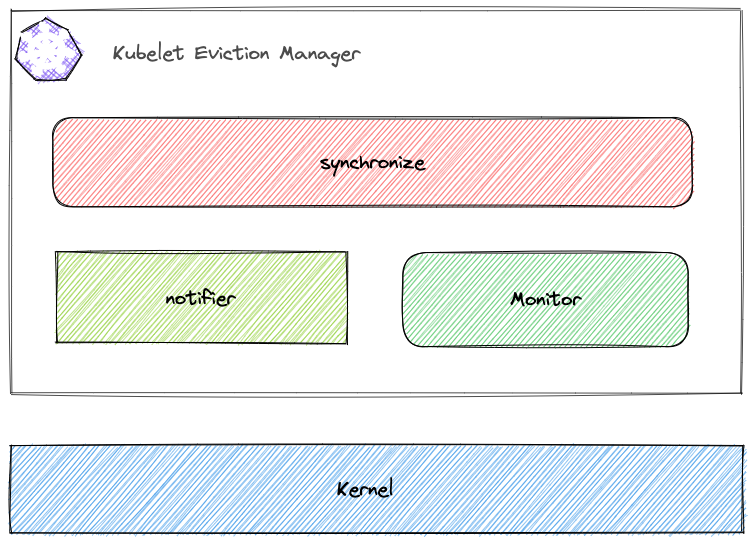 The initialization code for notifier is as follows (some extraneous code has been removed for readability), mainly to find the file descriptor watchfd for memory.usage_in_bytes and controlfd for cgroup.event_control and to complete the cgroup memory thrsholds are registered.

The notifier also listens for the above eventfd via epoll at boot time, and sends a signal to the channel when it listens for an event sent by the kernel indicating that the memory used has exceeded the threshold.

The synchronize logic determines whether the notifier has been updated in 10s and restarts the notifier each time it is executed. The cgroup memory threshold is calculated by subtracting the total amount of memory from the user-set eviction threshold.

Eviction Manager’s main logic synchronize is more detailed, so we won’t post the source code here, but we will sort out the following matters.

The order of eviction of pods depends on three main factors.

Next is the implementation of eviction Pod. Eviction Manager evicts Pods with a clean kill, the specific implementation is not analyzed here, it is worth noting that there is a judgment before eviction, if IsCriticalPod returns true then no eviction.

Then look at the code for IsCriticalPod.

From the code, if the Pod is Static, Mirror, Critical Pod are not evicted. Static and Mirror are judged from the annotation of Pod; Critical is judged by the Priority value of Pod, if the Priority is system-cluster-critical / system-node-critical, it belongs to Critical Pod.

However, it is worth noting that the official documentation refers to Critical Pods as saying that if a non-Static Pod is marked as Critical, it is not completely guaranteed not to be evicted. Therefore, it is likely that the community has not thought through whether to evict in this case, and does not rule out changing this logic later, but it is also possible that the documentation is not up to date.

This article analyzed Kubelet’s Eviction Manager, including its listening to Linux CGroup events and determining Pod eviction priorities. Once we understand this, we can set the priority according to the importance of our application, even set it to Critical Pod.