Recently, I have been doing CSI-related work, and as I have been developing it, I have come to believe that the details of CSI are quite tedious. By organizing the CSI workflow, I can deepen my understanding of CSI and share my knowledge of CSI with you.

I will introduce CSI through two articles, the first of which will focus on the basic components and workings of CSI, based on Kubernetes as the COs (Container Orchestration Systems) for CSI. The second article will take a few typical CSI projects and analyze the specific implementation. 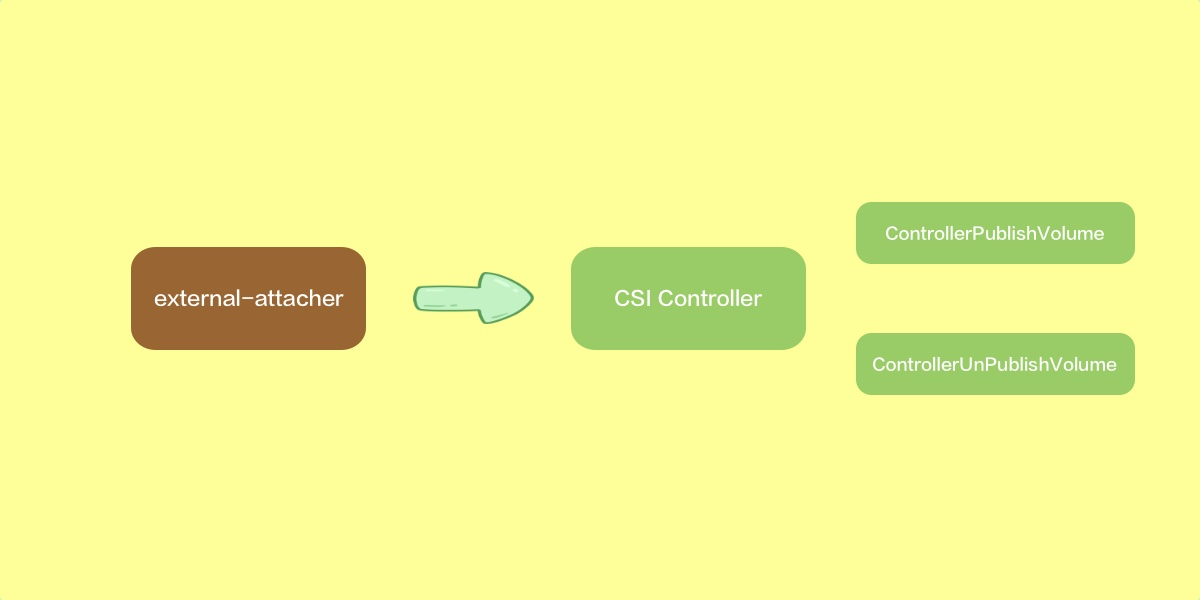 Listens to the VolumeAttachment object and calls the ControllerPublishVolume and ControllerUnpublishVolume interfaces of the CSI driver Controller service to attach and remove volumes to and from the node.

This component is needed if the storage system requires the attach/detach step, as the K8s internal Attach/Detach Controller does not call the CSI driver interface directly. 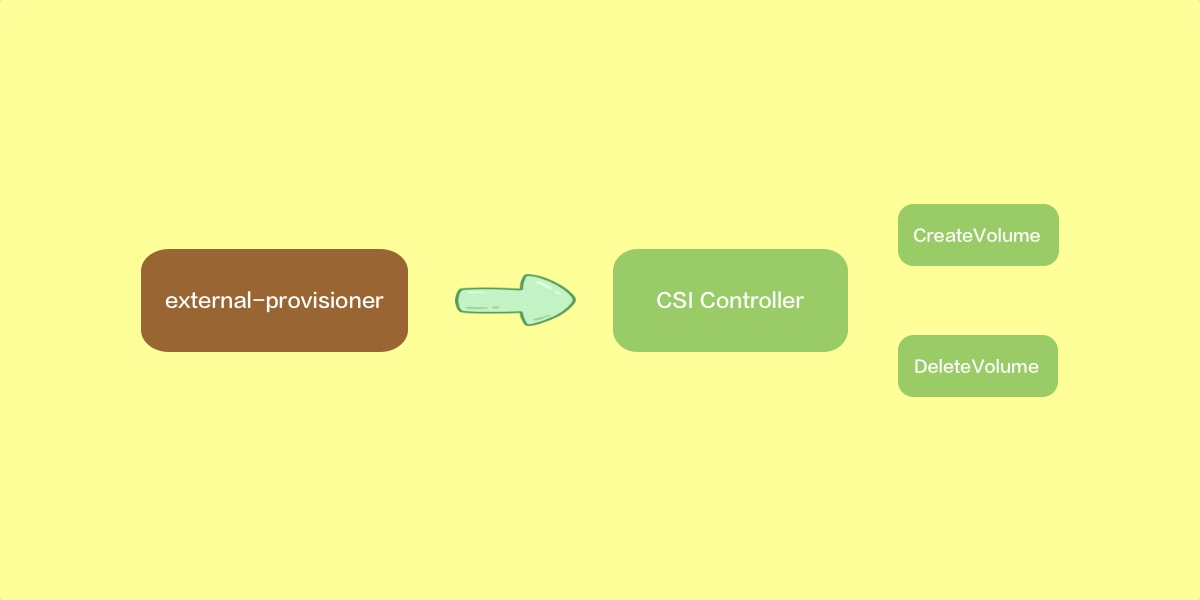 Provided that the provisioner field of the StorageClass specified in the PVC is the same as the return value of the CreateVolume and DeleteVolume interfaces of the CSI driver Controller service. The GetPluginInfo interface of the Identity service returns the same value. Once the new volume is provisioned, K8s will create the corresponding PV.

If the recycling policy of the PV bound to the PVC is delete, then the external-provisioner component listens for the deletion of the PVC and calls the DeleteVolume interface of the CSI driver Controller service. Once the volume is deleted successfully, the component will also delete the corresponding PV. 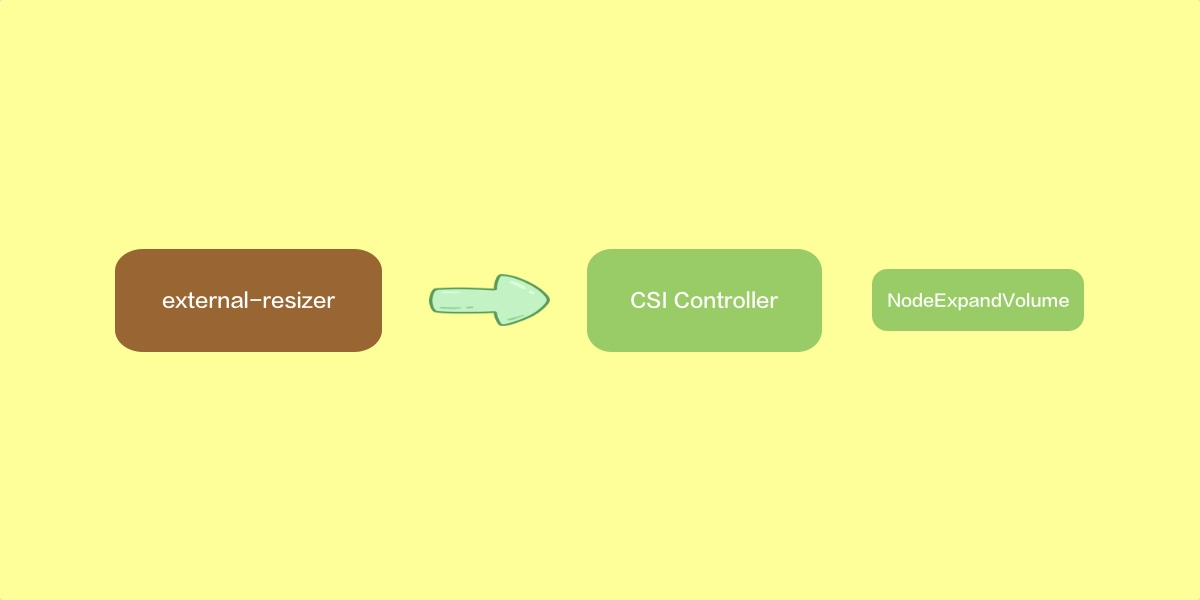 Listens to the PVC object and if the user requests more storage on the PVC object, the component calls the NodeExpandVolume interface of the CSI driver Controller service, which is used to expand the volume. 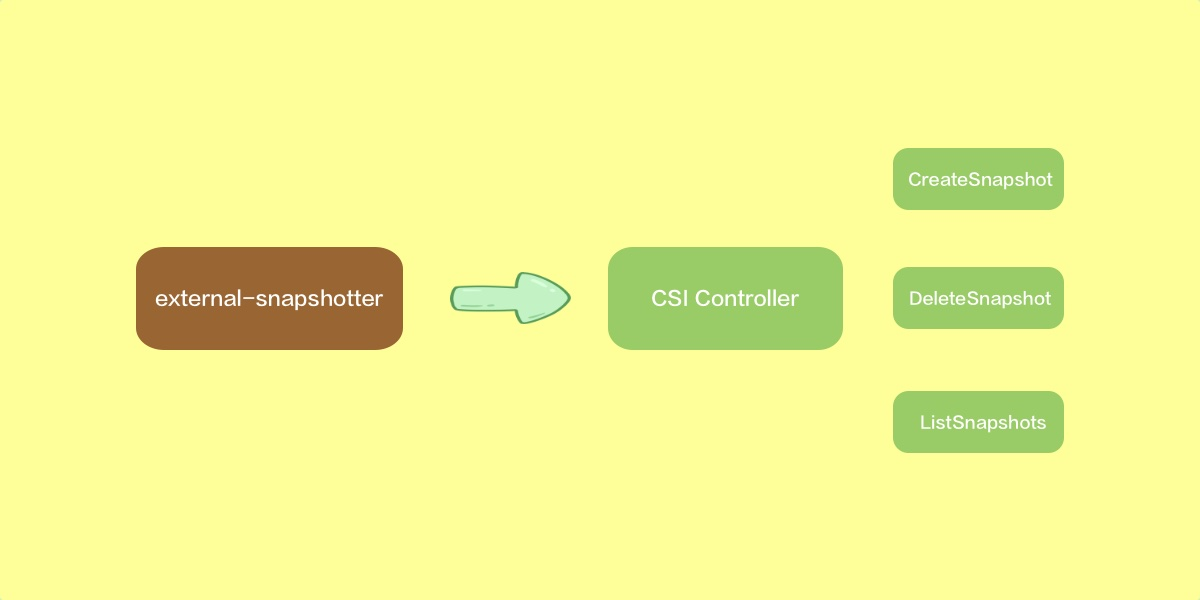 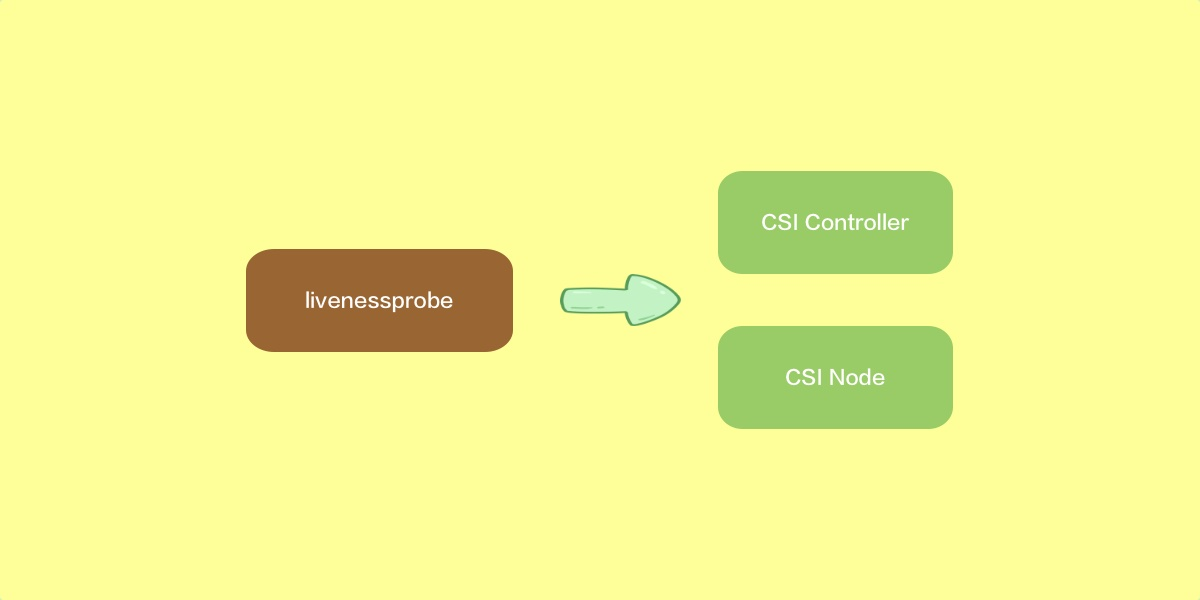 Responsible for monitoring the health of the CSI driver and reporting to k8s through the Liveness Probe mechanism, and restarting the pod when an abnormality is detected in the CSI driver. 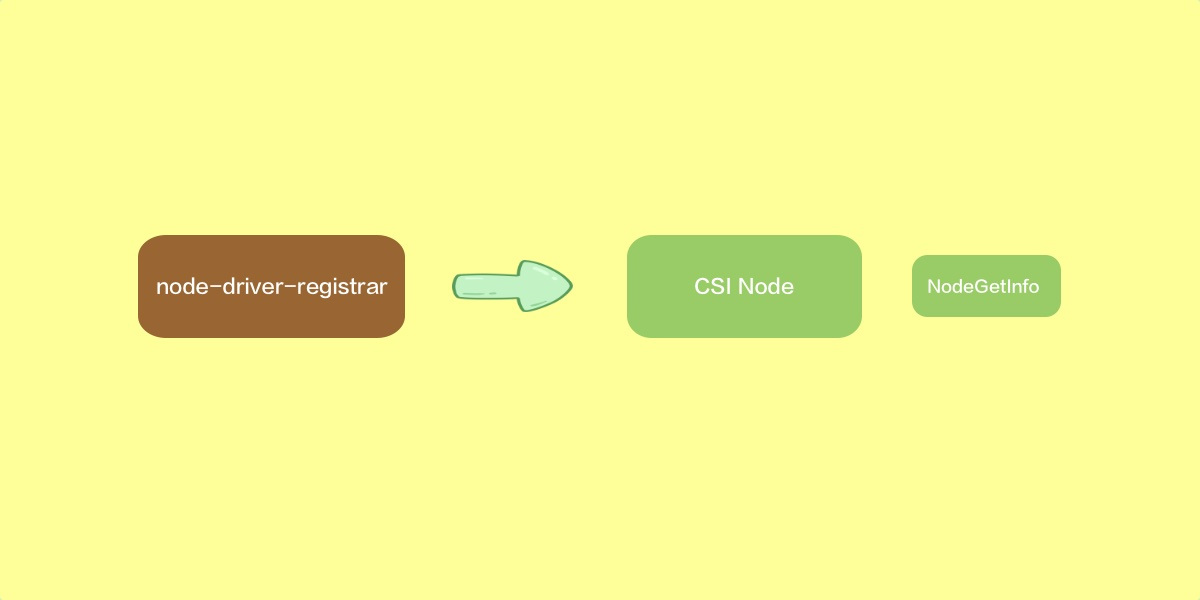 By directly calling the NodeGetInfo interface of the CSI driver Node service, the CSI driver information is registered on the corresponding node’s kubelet through the kubelet’s plugin registration mechanism. 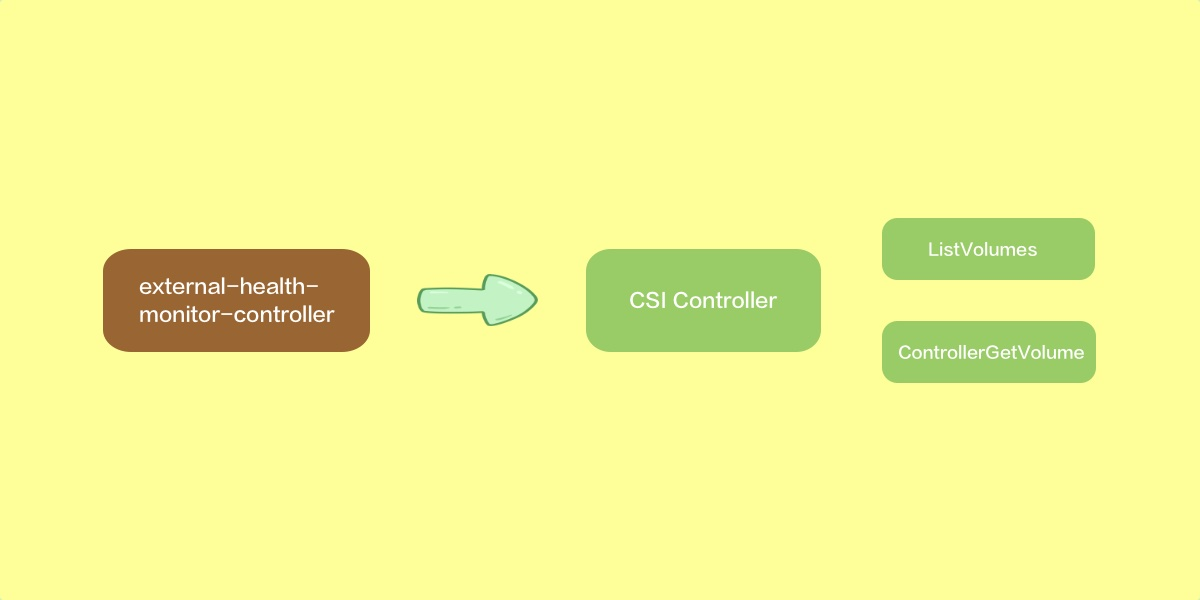 The health of the CSI volume is checked and reported in the event of the PVC by calling the ListVolumes or ControllerGetVolume interface of the CSI driver Controller service. 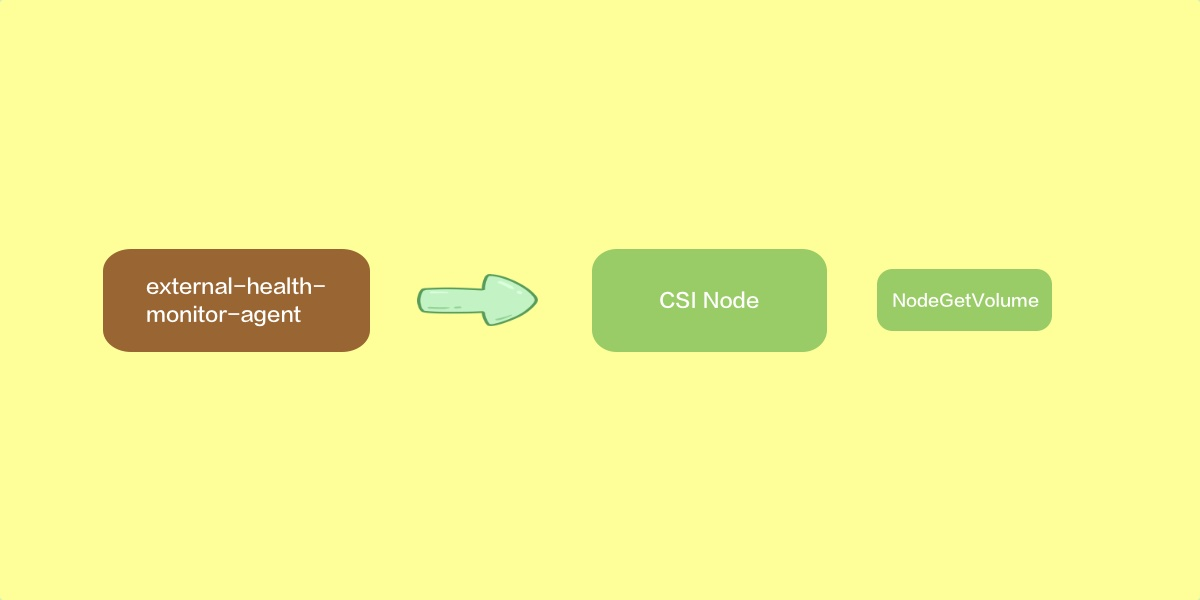 Check the health of the CSI volume by calling the NodeGetVolumeStats interface of the CSI driver Node service and report it in the pod’s event.

The CSI Identity is used to provide the identity information of the CSI driver and needs to be implemented by both the Controller and the Node. The interfaces are as follows.

GetPluginInfo is mandatory, the node-driver-registrar component will call this interface to register the CSI driver to the kubelet; GetPluginCapabilities is used to indicate what features the CSI driver mainly provides.

is used to create/delete volumes, attach/detach volumes, volume snapshots, volume expansion/contraction, etc. The Controller plugin needs to implement this set of interfaces. The interfaces are as follows.

The Node plug-in needs to implement this set of interfaces for mount/umount volume, check volume status, etc. The interfaces are as follows.

NodeStageVolume is used to implement the function of multiple pods sharing a single volume, supporting first mounting the volume to a temporary directory and then mounting it to the pod via NodePublishVolume; NodeUnstageVolume does the opposite.

Here’s a look at the entire workflow of pod mounting volume. There are three phases in the process: Provision/Delete, Attach/Detach, and Mount/Unmount, but not every storage solution goes through these three phases, for example, NFS does not have an Attach/Detach phase.

The entire process involves not only the work of the components described above, but also the AttachDetachController and PVController components of the ControllerManager and the kubelet, and the following is a detailed analysis of the Provision, Attach, and Mount phases respectively. 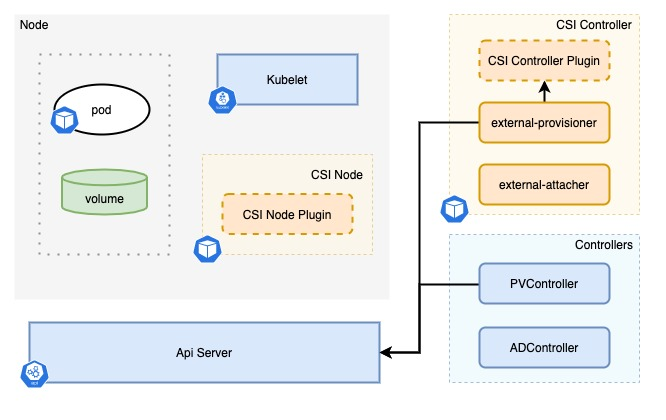 Let’s look at the Provision phase first, the whole process is shown in the figure above. Both extenal-provisioner and PVController watch PVC resources. 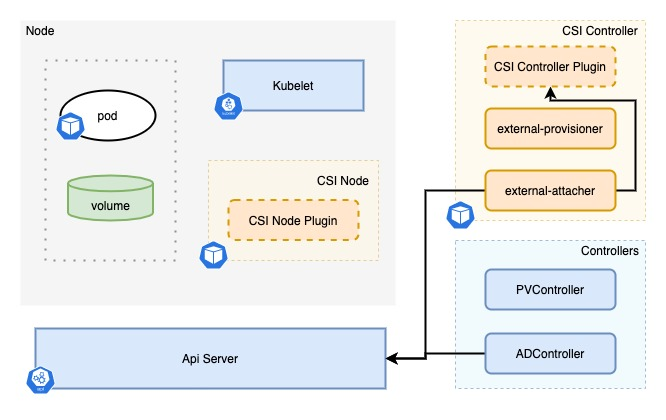 The Attach phase refers to attaching a volume to a node, and the whole process is shown in the figure above. 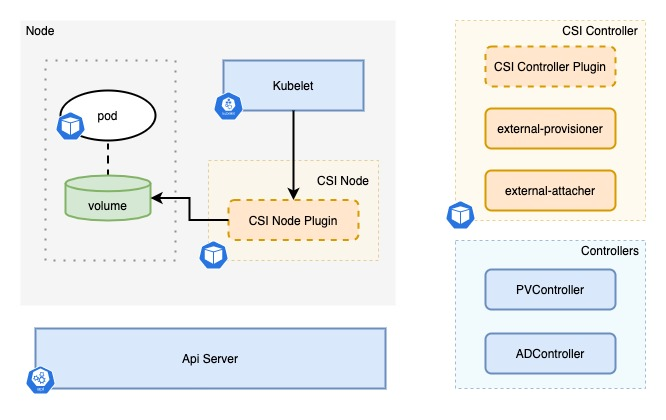 The last step of mounting the volume to the pod involves the kubelet, and the whole process is simply described as a kubelet on the corresponding node calling the CSI Node plug-in to perform the mount operation during the pod creation process. The following is a breakdown of the kubelet’s internal components.

First, in the main function syncPod where the kubelet creates the pod, the kubelet calls the WaitForAttachAndMount method of its subcomponent volumeManager and waits for the volume mount to complete.

The volumeManager contains two components: the desiredStateOfWorldPopulator and the reconciler, which work together to complete the mount and umount process of the volume in the pod. The whole process is as follows. 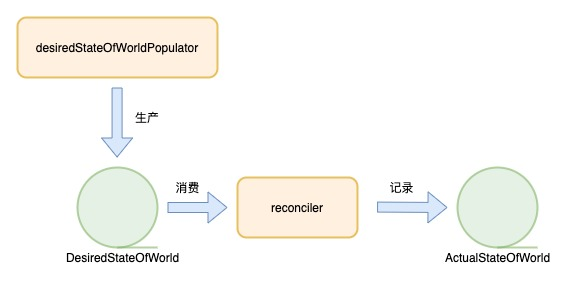 The reconciler is the consumer, and it does three main things.

Let’s take mountAttachVolumes() as an example and see how it calls the CSI Node interface.

This function constructs the executor function first and then executes it, then look at the constructor again.

Here we first go to the plugin list of the CSI registered to the kubelet and find the corresponding plugin, then execute volumeMounter.SetUp and finally update the ActualStateOfWorld record. Here, the external CSI plugin is csiMountMgr, and the code is as follows.

This article analyzes the entire CSI system from three aspects: the CSI components, the CSI interface, and the process of how volume is mounted on a pod.