This article focuses on function calling conventions in C. The assembly code is combined with real-time observation of stack changes to visualize the process of function calls. This article only discusses the situation in x86/64 architecture, Linux/GCC environment, but other environments should be similar in overall idea and need to deal with these issues.

What is the Calling Convention?

It is mainly to facilitate the sharing of code and to simplify the way sub-functions are used. How are arguments and return values passed, how are stack frames created and destroyed, and what are the caller and callee responsible for? The calling convention specifies all of these, and as long as both the function definer and the caller follow this convention, then the interaction can be error-free; otherwise, inconsistent state can lead to fatal errors in the program.

The x86 C compiler usually uses the cdecl calling convention by default, and this is the de facto standard for the C language. There are of course a number of other calling conventions, which the reader can learn more about through the references at the end of this article. 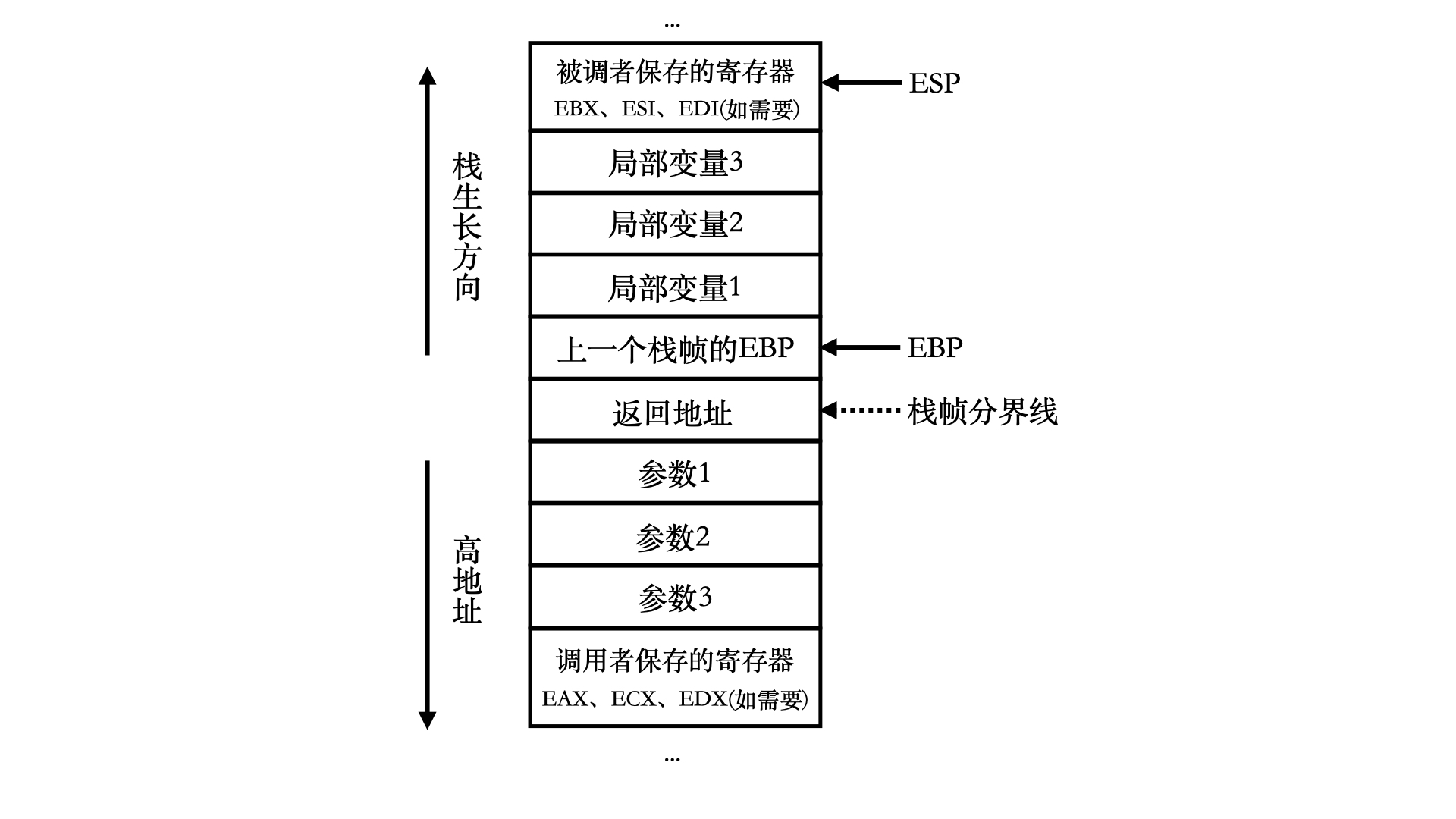 ESP and EBP indicate the current top-of-stack position and the base address of the current stack frame, respectively. EBP with appropriate offsets allows easy access to parameters and local variables, as well as fast frame closure.

When initiating a subfunction call, the caller needs to.

We’ll look at the callee rules later. For now, let’s assume that the subfunction has returned, so the stack has normally reverted to the situation before the call instruction was called. The caller can get the return value of the subfunction from the EAX register. To fully restore the state before the subfunction call, you also need to.

The sub-function at the beginning needs to.

Let’s take a practical look at this with a simple example as follows.

After we compile it, we use objdump to disassemble.

Next we will visualize the process of calling a function, i.e., the foo function above, in conjunction with the assembly code and the stack in real time.

First, let’s look at the first part of the main function

The next part is the part related to the call to the foo function, when the stack is as follows.

At this point EBP points to the base address of the main function stack frame, and ESP points to the top of the stack location. Since our program is very simple and the registers saved by the caller are not used later, the step of saving registers is omitted here. Since the stack space of the parameters has been allocated at the beginning, the next step is to directly assign the value to the corresponding position of the formal reference on the stack.

The parameters are passed in right-to-left order, so the second parameter is passed first and the value at the ESP+4 position is assigned a value of 2.

Let’s skip ahead and assume that the foo function has now returned and look at the last few instructions. The return value is now stored in EAX.

Now let’s look at the part of the callee foo function. After executing the call instruction in the main function, the stack looks like this.

At this point, the return address is already on the stack, and EBP is still the base address of the previous main function.

First you need to create the stack frame of the foo function, put the EBP on the stack, and save the base address of the main function stack frame.

Immediately after letting EBP point to the current ESP location, EBP becomes the base address of the foo function stack frame. You can then access the form reference and local variables by adding certain offsets to the EBP.

Normally, if the foo function uses the registers saved by the callee, you need to perform a stack operation here now to save the values of the corresponding registers. Since our program is relatively simple, we don’t have this process.

Then the value of the EAX register is assigned to the EBP-4 position.

The next step is to assign the value of the formal parameter b to fb, which performs a similar operation, with a little transit through the register EAX.

Next, perform the operation of adding fa and fb, first put the value of EBP-8 into EAX, because of the -O0 relationship this step again seems a little redundant, then EBP-4 value added to EAX, after the execution of EAX becomes 3.

Here the function body has been executed, but there is still some after work to be done.

The difference on x64

On x64, not only is the number of registers extended to 64 bits, but there are also more registers available. Linux uses the System V AMD64 ABI calling convention on x64, the main elements of which are as follows.

Another point worth mentioning is that for leaf-node functions, a 128-byte space (red-zone) is reserved below the stack pointer of the function, which can be used by the compiler to save local variables, thus eliminating some instructions at the beginning.

You can see that the two parameters are not passed through the stack, but through the edi and esi registers, respectively.

Let’s take a look at the foo function again and notice that it does not allocate stack space for local variables inside it, but assigns them directly via rbp. This is because the foo function is the leaf node function we mentioned earlier, it does not call any other function, so it can use the red-zone space directly.