Presto is Facebook’s open source MPP (Massive Parallel Processing) SQL engine, which derives its idea from a parallel database called Volcano, which proposes a model for parallel execution of SQL that is designed to be used exclusively for high-speed, real-time data analysis. Presto is a SQL computation engine, separating the computation and storage layers, which does not store data and enables access to various data sources (Storage) through the Connector SPI.

Hadoop provides a complete solution for big data storage and computation, but it uses the MapReduce computing framework, which is only suitable for offline and batch computation and cannot meet the performance requirements of fast real-time Ad-Hoc (instant analysis) query computation. However, as more and more data becomes available, a simple data query using Hive can take minutes to hours, which clearly does not meet the needs of interactive queries. Comparison with Hive. 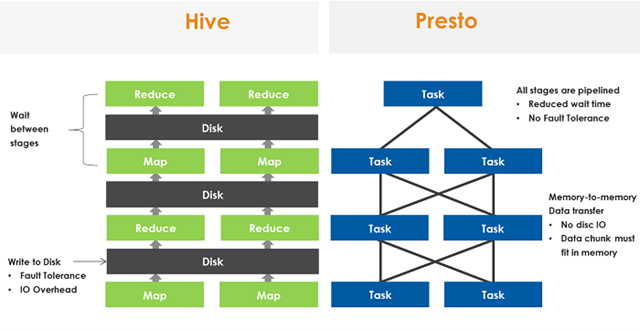 The above diagram shows the difference between MapReduce and Presto execution process. Each operation of MR either needs to write to disk or wait for the previous stage to finish before starting execution, while Presto converts SQL into multiple stages, each stage is executed by multiple tasks, and each task will be divided into multiple splits. All the tasks are allowed in parallel, and the data is executed in pipeline between stages, and the data is transferred to and from the network in the form of Memory-to-Memory, without disk io operations. This is the decisive reason why Presto’s performance is many times faster than Hive.

Presto follows a common Master-Slave architecture, with one Coordinator and multiple Workers, and the Coordinator is responsible for parsing SQL statements, generating execution plans, and distributing execution tasks to the Worker nodes for execution; the Worker nodes are responsible for actually executing the query tasks. Presto provides a set of Connector interfaces for reading meta information and raw data, and Presto has a variety of built-in data sources, such as Hive, MySQL, Kudu, Kafka, etc. At the same time, Presto’s extension mechanism allows customizing the Connector to enable querying of custom data sources. If a Hive Connector is configured, a Hive MetaStore service needs to be configured to provide Hive meta information to Presto, and the Worker nodes interact with HDFS through the Hive Connector to read raw data. 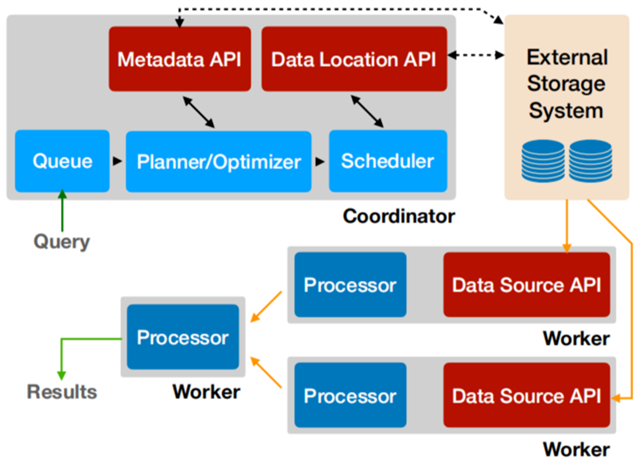 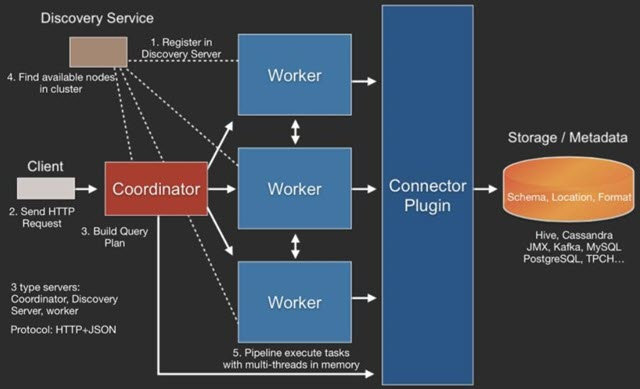 The overall query process is. 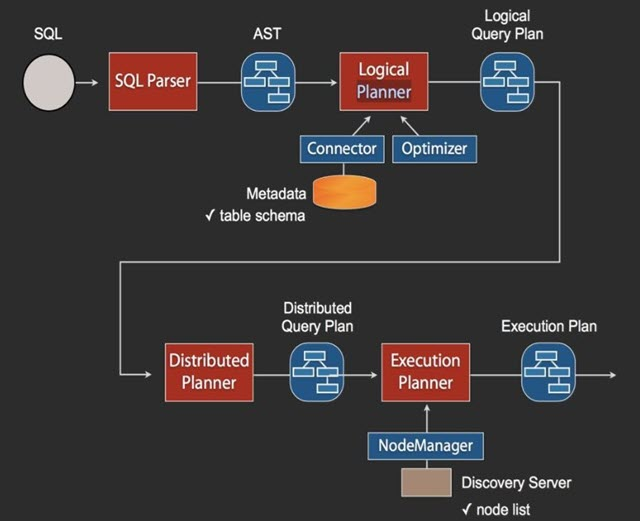 When the Coordinator receives a Query, the SQL execution process is as shown in the above figure. the SQL is parsed into AST (Abstract Syntax Tree) by Anltr3, and then the original data Metadata information is obtained through the Connector. The logical plan is generated, and then the distribution plan and execution plan are generated in turn. In the execution plan, we need to go to Discovery to get the list of available nodes, and then according to a certain policy, these plans are distributed to the specified Worker machines, which are then executed separately.

A tree structure generated by the syntax parser based on SQL, parsed to describe the execution process of SQL. In the following, the SQL select avg(response_size) as a , client_address from localfile.logs.http_request_log group by client_address order by a desc limit 10 is used as example to describe.

The abstract syntax tree describes the query in terms of Query, with a hierarchy representing the subqueries at different levels. Each level of query contains several key elements: select, from,where,group by,having,order by,limit. where from can be a subquery or a table.

The process of transcription into a logical execution plan, including transcription and optimization. The abstract syntax tree is transcribed into a node tree consisting of simple operations, and then all aggregate computation nodes in the tree are transcribed into map-reduce form. And insert Exchange nodes in the middle of map-reduce nodes. Then, a series of optimizations are performed to push down some nodes that can accelerate the computation in advance and merge the nodes that can be merged.

The execution logic of the above SQL.

As you can see from the execution plan, the agg nodes are split into two steps, partial and final.

In scheduling, it is necessary to specify for each fragment to which machines it is assigned. In terms of scheduling, there are three types of fragment

For the output of the computation result, there are also various ways, depending on the number of machines in the downstream node.

In the following figure, for example, fragment 2 is a source type fragment with three splits, so three machines are assigned. Because this layer of computation is group by aggregation, the output is computed according to the key of group by to calculate the hash and select one of the downstream machines for output. 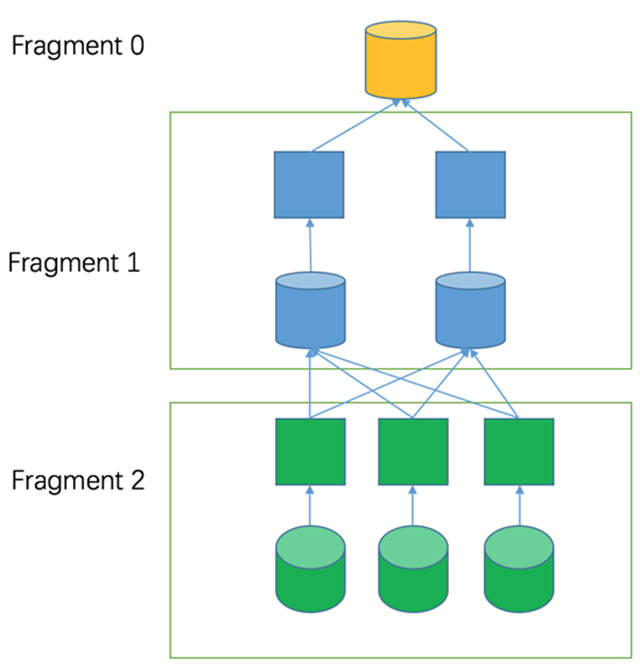 The tasks before scheduling are done in the coordinator, and after scheduling is done, the tasks are sent to the worker for execution afterwards.

After the logical execution plan fragment is sent to the machine, it is transcribed into an operator list in the form of a node tree and dynamically compiled to generate bytecode according to the logical code. Dynamic generation of bytecode, mainly using the compilation principle.

These means will make better use of the CPU pipeline.

The physical execution plan constructs the generated Operator list and hands it to the Driver for execution. Exactly which data is computed is determined by the loaded Split.

The generated execution plans have the aggregation computation split into two steps, Map and Reduce.

Aggregation calculations are to be executed in the form of Map-Reduce.

The functions provided by the aggregation calculations have to provide four interfaces, with two inputs and two outputs, respectively:

Take Avg as an example.

There are two types of functions, namely Scaler and Aggregate functions 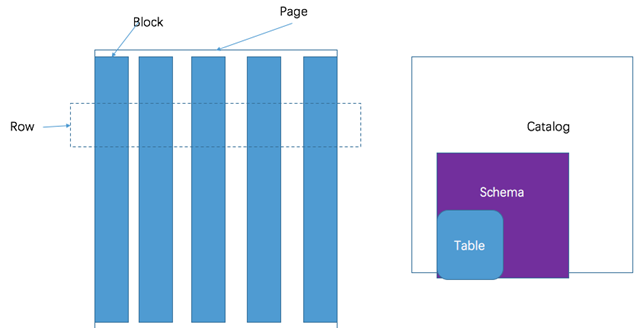 Once you understand the data model of presto, you can write plugins to presto to interface to your own storage system. presto provides a set of connector interfaces to read metadata from custom storage, as well as column storage data. Let’s first look at the basic concepts of connector.

Presto is an in-memory computing engine, so memory management must be fine-tuned to ensure orderly and smooth execution of queries, and partial starvation, deadlocks and other situations. 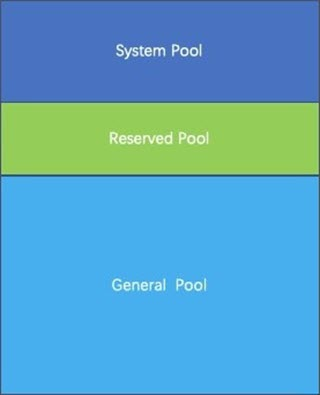 Why memory pools are used

System Pool is used for memory used by the system, for example, data is passed between machines and buffer is maintained in the memory, which is mounted under the system name.

So, why do you need reserved area memory? And is the reserved memory exactly equal to the maximum memory used by the query on the machine?

If there is no Reserved Pool, then when there are a lot of queries and they are almost running out of memory space, one of the more memory consuming queries starts running. But then there is no more memory space for this query to run, and the query keeps hanging, waiting for available memory. But after other small-memory queries are run, new small-memory queries are added. Since small memory queries take up little memory, it is easy to find available memory. In this case, the big memory query keeps hanging until it starves.

So in order to prevent this starvation, a space must be reserved for the large memory query to run. Every second, Presto picks out a query with the largest memory footprint and allows it to use the reserved pool to avoid running out of memory for that query.

When the query memory and machine memory are aggregated, the coordinator selects a query that uses the most memory and assigns it to the Reserved Pool.

Memory management is managed by the coordinator, which makes a judgment every second to specify that a particular query can use reserved memory on all machines. So the question is, if the query is not running on a machine, isn’t the memory reserved for that machine wasted? Why not pick out the largest task on a single machine and execute it. The reason is still deadlock, if the query, which enjoys reserved memory on other machines, is executed quickly. But if it is not the largest task on a machine, it will not be run and the query will not be finished.