Seata is a distributed transaction service open source by Ali , currently provides users with AT, TCC, SAGA, XA transaction mode , the overall use of a two-phase commit protocol. go version of seata-golang currently seems to implement only mysql AT, TCC mode , the author is not much updated now .

Of course, looking at it this way, it may not be very understandable, I take a diagram from the official website to explain. 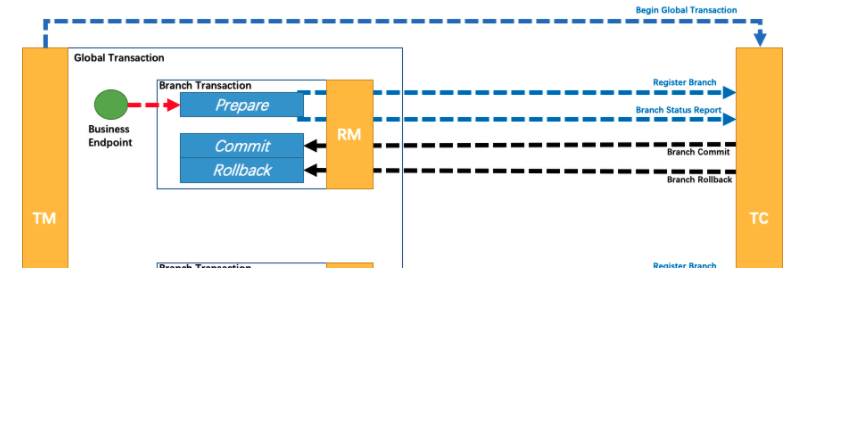 As you can see from the above diagram, the tasks that these three roles are responsible for are as follows.

To put it plainly is to manage the various services involved in the distributed transaction (such as the classic order scenario involving: order services, inventory services, marketing services, etc.)

ps: personal feeling, here the RM is somewhat similar to the intermediate processing layer in microservices (professional terminology they call this bff->backend for fronted).

OK. Here you can see some details of seata-golang implementation, seata-golang underlying use gRPC for communication.

As for the managers, the major transaction patterns supported are stored (TCC, etc.), and each pattern only needs to implement this interface.

Look at the structure of the TC section again (only the fields that will be involved will be kept, other details can be checked by yourself).

TC’s storage of data currently supports mysql and pgsql, that is, the implementation of the SessionManager interface, and then injected into the SessionHolder’s manager.

After the introduction of these two basic structures, remember what we said above about the relationship between them?

The second stage TC will inform RM whether to commit or rollback according to the current transaction status.

When the ResourceManager is initialized:

We see that eventually a grpc interface branchCommunicate will be called for TC.

Corresponds to the server side.

We know that gRPC has four basic communication modes.

If you want the stream form is also very simple, just add the stream tag in front of the corresponding request|response parameters in the proto method definition, then the interface is streamed. As for which stream, it depends on which side you add stream to, if both request and response are added, then it is a two-way stream.

Both the client and the server can send a request via stream.

Correspondingly, when TC is called by RM after BranchCommunicate.

How does the data come from the above notifications to RM to commit or rollback?

When TC wants to notify RM of a branch commit.

The last one is TM, not much difficulty in understanding.