sync.Pool is Golang’s built-in object pooling technology, which can be used to cache temporary objects to avoid the consumption and pressure on GC caused by frequent creation of temporary objects.

You can see sync.Pool used extensively in many well-known open source libraries. For example, the HTTP framework Gin uses sync.Pool to reuse the gin.Context object that is created with each request. sync.Pool can also be found in grpc-Go, kubernates, and others.

Note, however, that sync.Pool cached objects can be cleared without notice at any time, so sync.Pool should not be used in scenarios where persistent objects are stored.

The sync.Pool is the official library built into goroutine and is very well designed. sync.Pool is not only concurrency-safe, but also lock free, and there is a lot to learn about it.

This article will explore the underlying implementation of sync.Pool based on the go-1.16 source code.

Before we talk about the underlying sync.Pool, let’s take a look at the basic usage of sync.Pool. The sample code is as follows.

When sync.Pool is initialized, it requires the user to provide a constructor New for the object. The user uses Get to get the object from the object pool and Put to return the object to the object pool. The entire usage is relatively simple.

Next, let’s take a closer look at how sync.Pool is implemented.

The underlying implementation of sync.Pool

Before we talk about sync.Pool, let’s talk about Golang’s GMP scheduling. In the GMP scheduling model, M represents the system threads, and only one P can be running on an M at the same time, which means that the logic on P is single-threaded from the thread dimension.

sync.Pool takes advantage of this feature of GMP. For the same sync.Pool, each P has its own local object pool poolLocal. This is shown in the figure below. 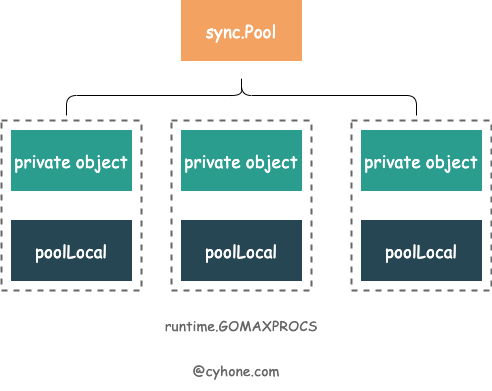 Among them, we need to focus on the following three fields.

A few other fields that we don’t need to care too much about for now, here’s a quick overview.

Since each P has its own poolLocal, Get and Put operations give priority to accessing the pool. Due to the nature of P, the whole concurrency problem is much simpler when manipulating local object pools, and concurrency conflicts can be avoided as much as possible.

Let’s look at the definition of the local object pool poolLocal, as follows.

The role of the pad variable is covered below and will not be discussed here for now. We can look directly at the definition of poolLocalInternal, where each local object pool contains two items: * private private variables.

The entire storage structure of poolChain is shown in the following figure. 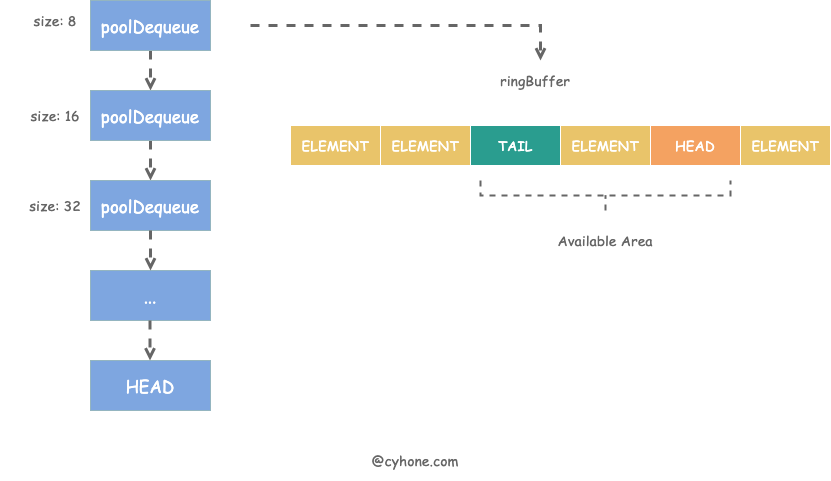 As you can probably guess from the name, a poolChain is a linkedlist structure with the head HEAD pointing to the most recently allocated element item. Each item in the chain is a poolDequeue object. poolDequeue is essentially a ring buffer structure. The corresponding code is defined as follows.

Why is poolChain such a complex structure of a linkedlist + ring buffer? Can’t we simply have a single element for each link table item?

The ring buffer is used because it has the following advantages.

These two features of the ring buffer are ideal for the sync.

As a ring buffer, poolDequeue naturally needs to record the values of its head and tail. However, in the definition of poolDequeue, head and tail are not separate variables, but only a uint64 headTail variable.

Why this complex packing operation? This is actually a very common lock free optimization.

For a poolDequeue, it may be accessed by more than one P at the same time (see the object-stealing logic in the Get function below), which can cause concurrency problems.

For example, when there is only one ring buffer space left, i.e. head - tail = 1. If multiple P’s access the ring buffer at the same time, without any concurrency measures, both P’s may get the object, which is definitely not expected.

How does sync.Pool achieve this without introducing Mutex locks? sync.Pool makes use of the CAS operation in the atomic package. Both P’s may get the object, but when the headTail is finally set, only one P will call CAS successfully and the other CAS will fail.

When updating head and tail, the operation is also performed with atomic variables + bitwise operations. For example, when implementing head++, the following code is needed.

As you can see from the above code, pin() is called first in the Put function. The pin function is very important, it has three functions.

Next, the Put function will set the current poolLocal private variable private as a preference. If the private variable is set successfully, then it will not write to the shared cache pool. This makes the operation more efficient.

When putting, it will directly fetch the head element of the poolChain’s chain, HEAD.

The process of Put is relatively simple, the whole process does not need to interact with other P’s poolLocal.

After understanding how Put is implemented, let’s move on to the Get implementation. The Get operation allows you to get an object from a sync.Pool.

The role of pin() and the role of the private object are the same as in the PUT operation, so we won’t go over them here. Let’s focus on the rest of the logic.

If the data is not fetched from the local object pool of other P, it is also not fetched. Next, it tries to fetch data from victim. As mentioned above, victim is a pool of objects that was cleaned in the previous round, and fetching objects from victim is the same way as popTail.

Finally, if all the cache pools are out of data, the user-set New function is called to create a new object.

sync.Pool is designed to start from the head when manipulating the local poolChain, either push or pop. And when fetching data from other P’s poolChain, only the tail popTail can be fetched. This minimizes concurrency conflicts.

sync.Pool does not have an object cleanup policy or cleanup interface open to the public. As we mentioned above, when stealing objects from other P’s, the empty poolDequeue will be phased out, but in addition, the sync.Pool must also have other object cleanup mechanisms, otherwise the object pool will probably expand indefinitely and cause memory leaks.

Golang’s cleanup logic for sync.Pool is very simple and brutal. Golang’s runtime will trigger a call to poolCleanup to clean up allPools before each round of GC.

Here we need to formally introduce the victim mechanism of the sync.Pool, which is also mentioned in the object-stealing logic of the Get function.

In each round of sync.Pool cleanup, the pool of objects is not completely cleaned up for the time being, but is placed in the victim. In other words, after each round of GC, the object pool of sync.Pool is transferred to victim, and the victim of the previous round is emptied out.

Why is this done? This is because Golang wants to prevent the sync.Pool from being suddenly emptied after a GC, which would affect the performance of the program. So we use victim as a transition first, and if we can’t get the data in the current round of object pool, we can also get it from victim, so that the program performance will be smoother.

The victim mechanism was first used in CPU Cache, you can read this wiki: Victim_cache for more details.

When we talk about poolLocal above, we find this strange structure: poolLocal has a pad attribute, and from the way this attribute is defined, it is clearly designed to round up to an integer multiple of 128 Byte. Why is this done?

Here it is to avoid the false sharing problem with CPU Cache: CPU Cache Lines are usually in 64 byte or 128 byte units. In our scenario, the poolLocal of each P is in the form of an array. If the CPU Cache Line is 128 byte and the poolLocal is less than 128 byte, the cacheline will take the memory data of other P’s poolLocal to make up a whole Cache Line. If two adjacent P’s are running on two different CPU cores at the same time, they will overwrite the CacheLine and cause the Cacheline to fail repeatedly, and the CPU Cache will be useless.

CPU Cache is the closest cache to the CPU, and if it is used well, it will greatly improve the performance of the program. Golang uses the pad method to prevent false sharing, so that the CacheLine is not shared with other P’s poolLocal.

To recap, sync.Pool maximizes performance by.