What is Web Components

With the popularity of front-end frameworks, component-based development has become the norm. We usually extract modules with common functionality and encapsulate them into a single component, which makes it easier to use and maintain. But components are also limited by the framework, for example, once you leave the framework itself, components can not be used, then there is no framework across the range of technology to build a common component? Yes, there is, and that is the protagonist of today’s introduction of Web Components.

Web components are a set of web platform APIs that allow you to create new custom, reusable, encapsulated HTML tags to use in web pages and web apps.

In general Web Components is “encapsulating a component in a standardized and non-intrusive way”. The concept of Web Components was first introduced by Alex Russell at the Fronteers conference in 2011, and in 2013 Google released the Polymer framework, an implementation based on the Web Components API, to drive Web Components standardization. In 2014, Chrome released an early v0-level component specification, which has been updated to v1 and is now accepted and supported by major browsers.

The template technology introduces two important elements, template and slot, which provide the template functionality and slot is used to provide a placeholder hao to make the template more flexible.

Defining new element tags that can be parsed into HTML requires first declaring a class that inherits from the HTMLElement class so that it can use some of the component’s lifecycle callback functions that help us enhance the component’s capabilities. To summarize the main points.

Execution order (here the attributeChangedCallback comes first because the configuration needs to be adjusted and should be done before inserting into the DOM).

Execution order (here attributeChangedCallback comes first because the configuration needs to be adjusted and should be done before the DOM is inserted).

An example of implementing a user-card with custom tags.

Here the Shaodow DOM should not be confused with the commonly used frameworks in the Virtual DOM (Virtual DOM is mainly to do performance layer optimization), Shadow DOM allows us to create a set of completely independent of other elements of the DOM tree, also called “shadow DOM”, with the It ensures that the current component is a functionally independent component that does not interfere with other DOM elements. Similar to iframe, it is an independent sandbox, but it does not have its own window and has a lightweight document. In addition, the shadowRoot object does not support all DOM APIs and supports mainstream methods such as getElementById, querySelector and querySelectorAll.

Not all HTML elements can be enabled for Shadow DOM, for example it does not make sense to use a non-container element like img as a Shadow Host and it will report an error. Currently supported elements: article, body, h1 ~ h6, header, p, aside, div, aside, nav, span, section, main, footer, blockquote.

Another standard HTML Imports (e.g. using <link rel="import" href="myfile.html >), which is deprecated and not detailed.

Safari started supporting Custom Elements and Shadow Dom in 2016, Firefox followed in 2017, and the APIs are now compatible as follows. 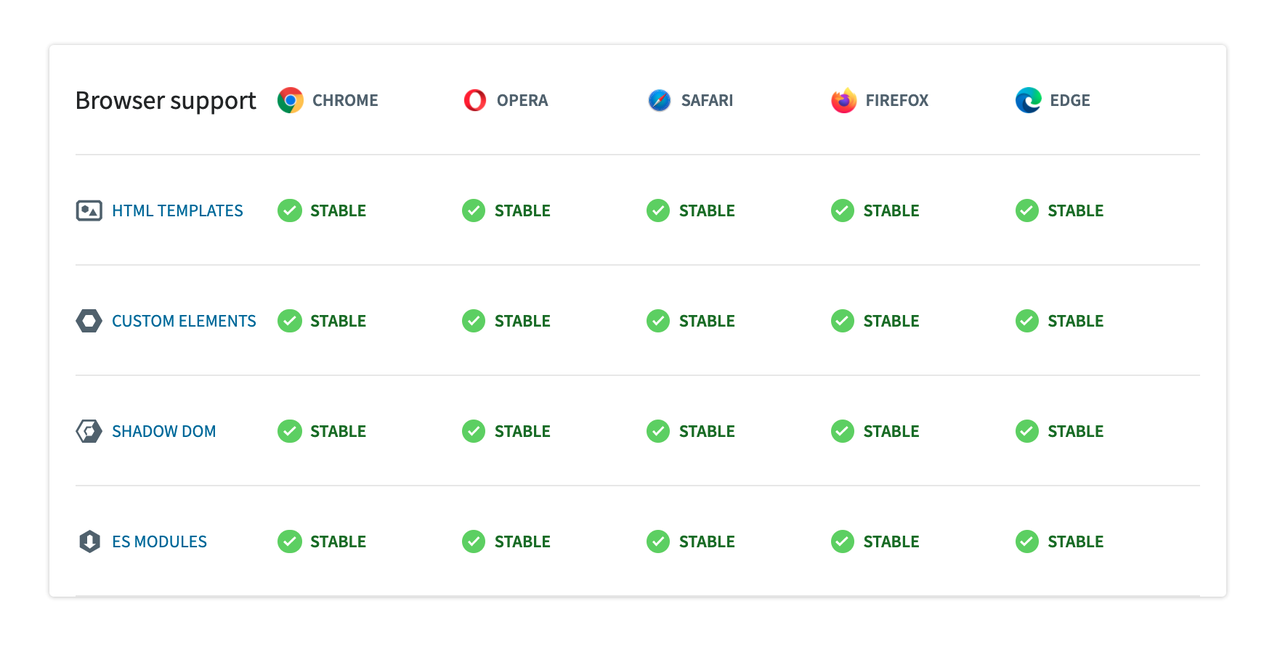