If we create a channel with a buffer, the underlying data model is as follows. 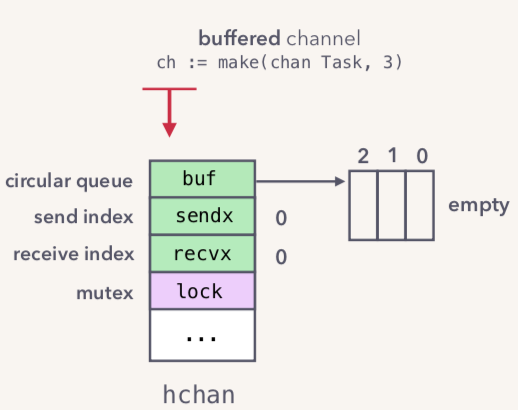 When we write data to the channel, it will be directly stored in the circular queue(send). When the Queue is full, it will be in the following state. 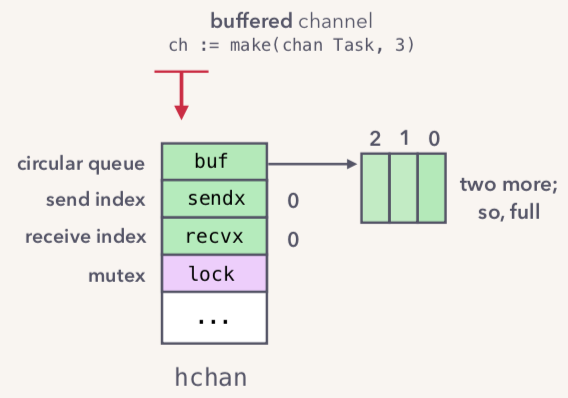 When dequeueing an element, the following is shown. 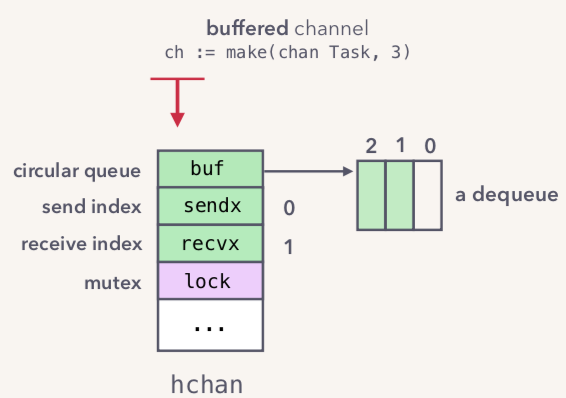 From the above figure, we can see that recvx has increased by one since, indicating that an element is queued, which is actually a circular array to achieve FIFO semantics.

Then there is another question, when we create a new channel, where is the memory allocated for the hchan data structure created by the underlying layer? In fact, Section2 has been analyzed in the source code analysis, hchan is allocated in the heap. 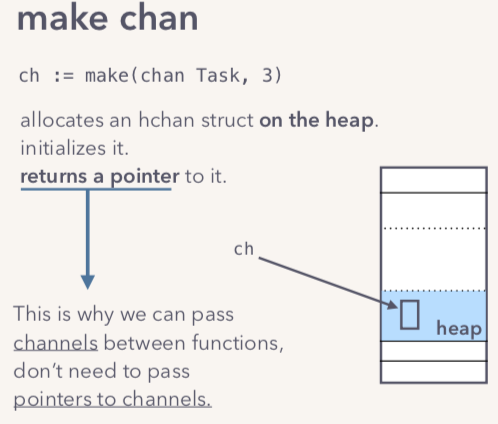 When different goroutines read and write on top of the channel, the process involved is more complicated, such as the following figure.

In the above diagram, G1 writes data to the channel and G2 reads data from the channel.

The flow of G1 acting on the underlying hchan is as follows. 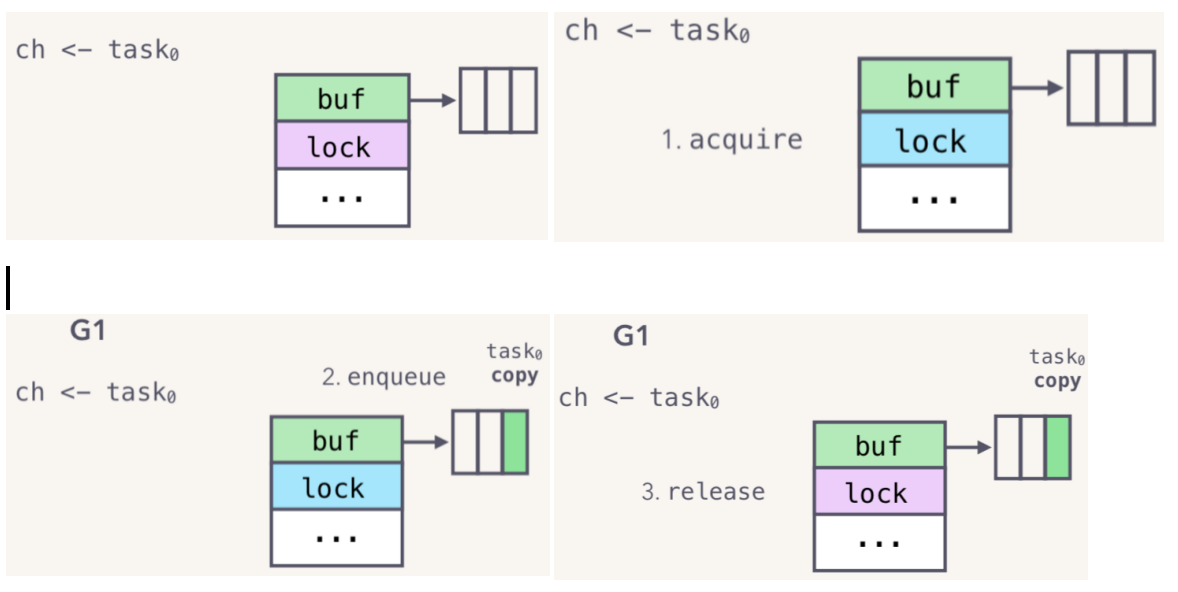 G2 reads when acting on the underlying data structure flow as shown in the following diagram. 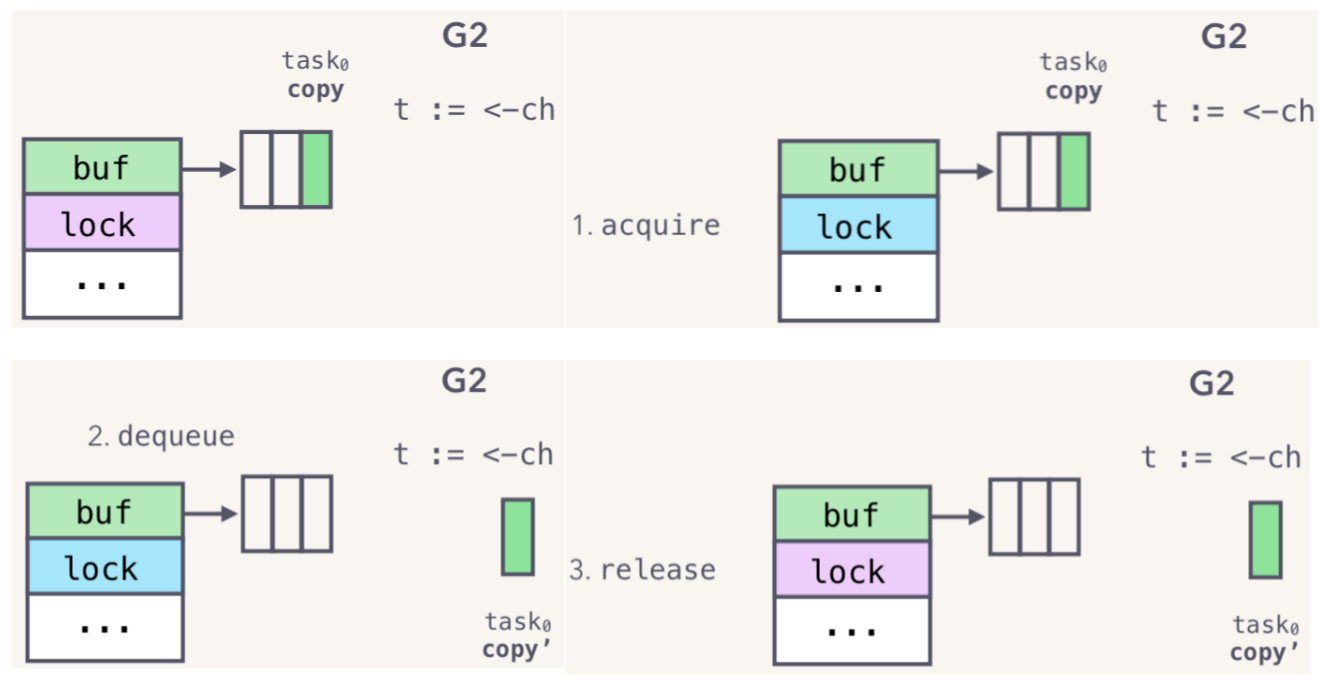 The above read and write idea is actually very simple, except for the hchan data structure, do not go through the shared memory to communicate; instead, through communication (copy) to achieve shared memory.

As shown in the figure below: the queue is full after 3 tasks are written to the channel, what will happen when G1 writes the fourth task?

G1 will pause at this point until a receiver appears.

This is where Golang’s scheduler needs to be introduced. We know that goroutines are user-space threads, and that they are created and managed by Go’s runtime, not by OS’s thread.

But Go’s runtime schedules execution of goroutines based on OS thread. The following diagram.

What happens when data is written to an already full channel? The following diagram. 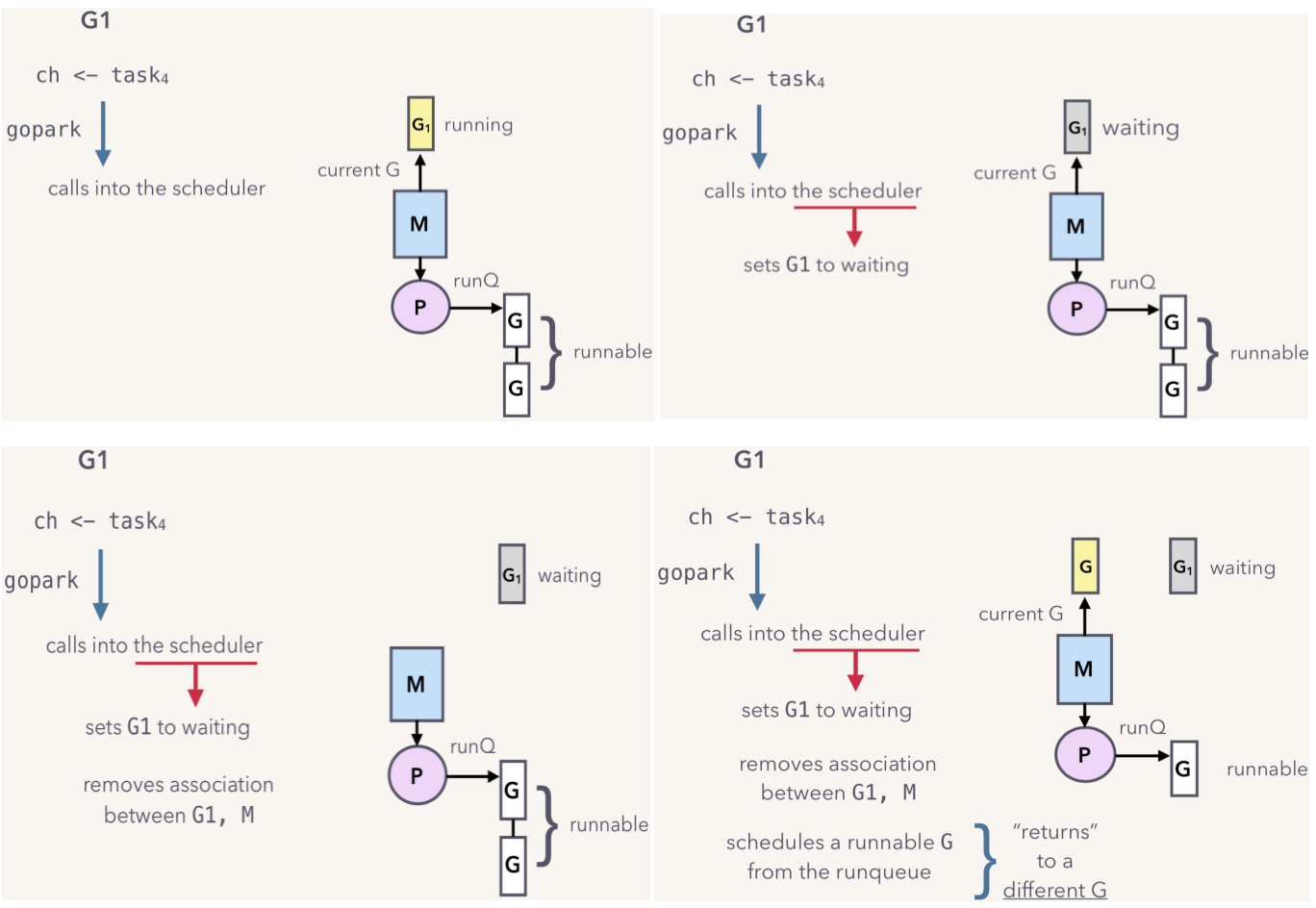 The flow of the above diagram is roughly as follows.

So the OS thread will be running all the time and will not be blocked by the blocking of the G1 co-process. Finally the reference of the current G1 will be deposited in the sender queue of the channel (the queue element is the sudog holding the G1).

So how is a blocked G1 restored? G1 is restored when a receiver receives channel data.

In fact the hchan data structure also stores the channel’s sender and receiver’s wait queue. The data prototype is as follows. 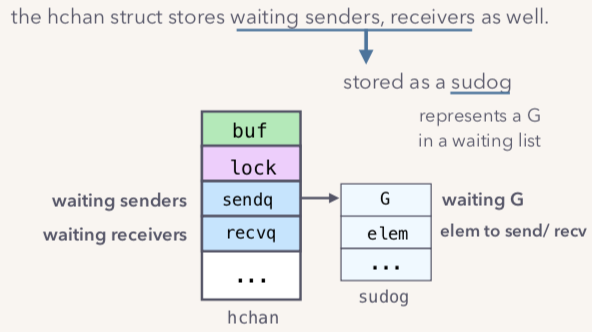 Inside the wait queue is a single linked list of sudog, sudog holds a G for goroutine object reference and elem for the elements saved inside the channel. When G1 executes ch<-task4, G1 creates a sudog and saves it into the sendq queue, and the actual hchan structure is as follows.

At this time, if G2 performs a read channel operation, the change graphs before and after the read are as follows.

The whole process is as follows.

G2 will call goready(G1) to wake up G1. the flow is shown in the following figure. 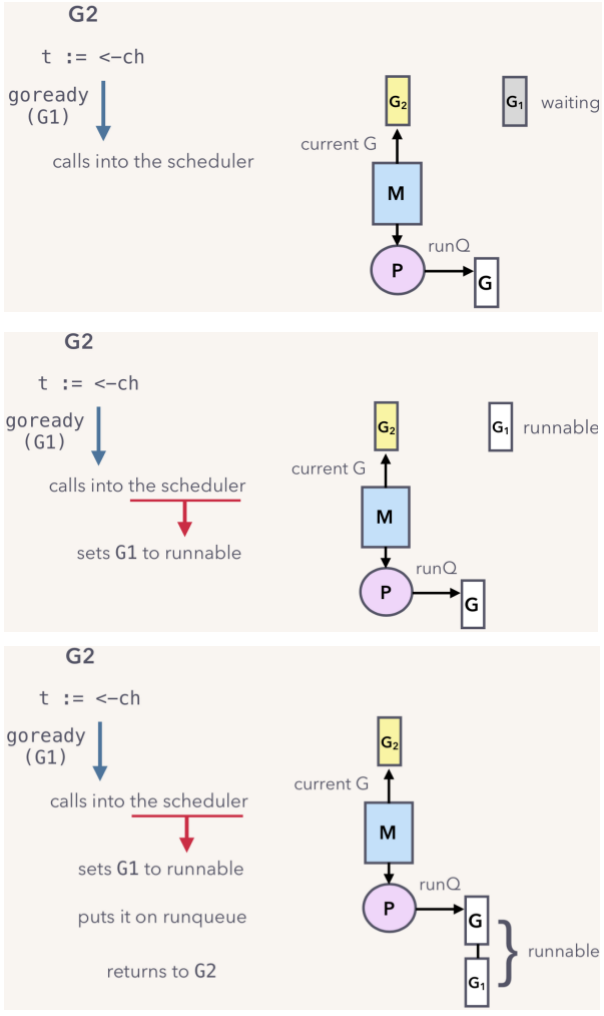 Scenario of reading an empty channel

When the buffer of a channel is empty, if G2 initiates a read operation first. The following figure. 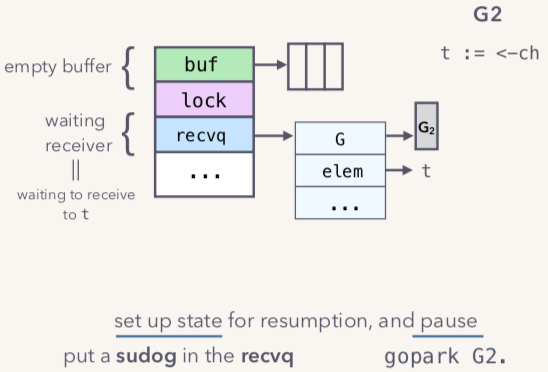 A sudog will be created, and the sudog representing G2 will be deposited into the recvq wait queue. Then G2 will call the gopark function to enter the wait state, giving up the OS thread, and then G2 will enter the blocking state.

At this time, if there is a G1 performing a write operation, the most intuitive flow is.

But we have a smarter way: direct send; which actually means that G1 writes the data directly to the elem in G2, so that it doesn’t have to go through the process of copying the elem in G2 to the buffer, and then copying from the buffer to G1. as follows. 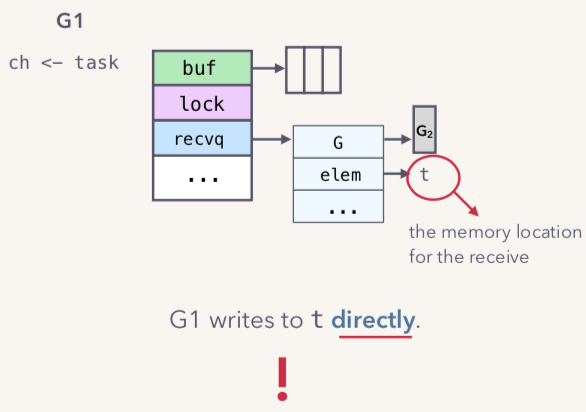 The specific process is that G1 writes data directly to G2’s stack. This way G2 does not need to get the global lock of the channel and operate the buffer.

The data structure of channel is relatively simple and consists of two main structures.

chan internally implements a ring queue as its buffer. The length of the queue is specified when the chan is created.

The following diagram shows a schematic of a chan that can cache 6 elements. 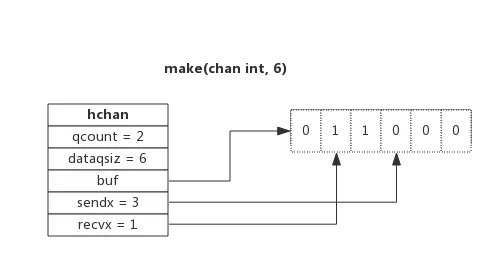 The blocked goroutine will hang in the channel’s waiting queue.

The following figure shows a channel without buffers with several goroutines blocking waiting to read data. 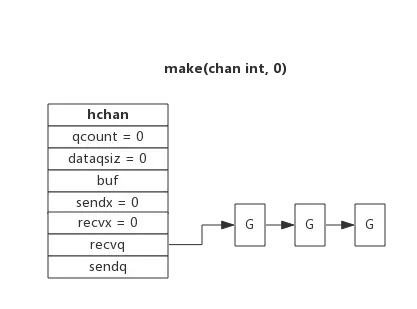 Note that in general at least one of recvq and sendq is empty. The only exception is when the same goroutine uses a select statement to write data to a channel while reading data from it.

A channel can only pass one type of value, and the type information is stored in the hchan data structure.

A channel can only be read or written by one goroutine at a time. For simplicity, the rest of this chapter does not cover locking and unlocking when describing the read/write process.

When we create a new channel, we usually use the make(chan, n) statement, which is rewritten by the compiler and then executed by the makechan function in chan.go. The source code of the function is as follows.

The function takes two arguments, one is the data type of the elements stored inside the channel, and one is the buffer capacity (if 0 means non-buffer buffer), the creation process is as follows.

The process of creating a channel is actually initializing the hchan structure. Where the type information and buffer length are passed in by the make statement, and the buf size is determined in conjunction with the element size and buffer length.

The pseudo code for creating a channel is shown below.

3.2 Writing to a channel by a goroutine (goroutine sender data)

All code that executes c < ep to send ep to a channel ends up calling the chansend function in chan.go.

The function is defined as follows.

The function has three parameters, the first represents the data structure of the channel, the second is a pointer to the data to be written, and the third block represents whether the write operation is blocking or not.

The main flow of writing data to a channel is as follows:

The simple process of writing data to a channel is as follows.

The flowchart is as follows. 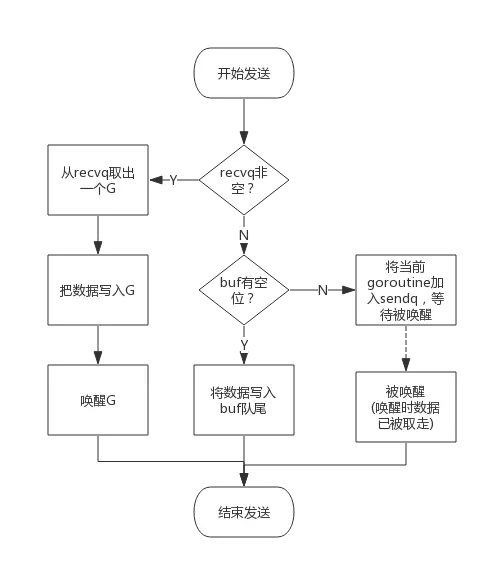 3.3 goroutine receive data from a channel

All code that executes ep < c to receive data from a channel using ep will end up calling the chanrecv function in chan.go.

The function is defined as follows.

As you can see from the source comment, this function receives data from the channel and writes the received data to the object pointed to by the ep pointer.

There is also a block argument, which indicates whether the channel blocks when it fails to return data. When block=false and there is no data in the channel, the function returns (false,false).

The flow of receiving data from a channel is as follows:

The simple process of reading data from a channel is as follows.

The simple flowchart is as follows. 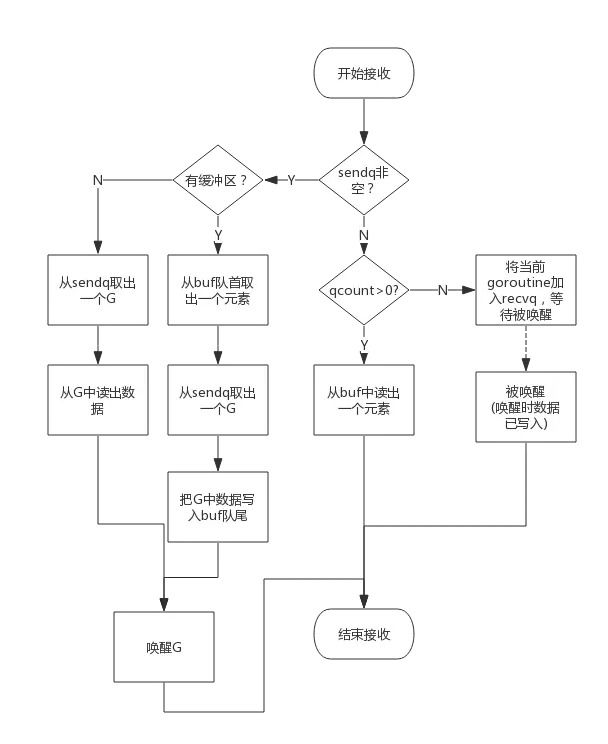 The channel is closed when we perform the close operation of the channel.

The main flow of closing is shown below.

In addition, there are some common scenarios where panic occurs.

A unidirectional channel is one that can only be used to send or receive data.

We know that a channel can be passed as an argument, so a one-way channel is just a restriction on the use of a channel, which is the same reason that C uses const to modify function arguments to be read-only.

A simple example program is as follows.

A simple example program is as follows.

Two channels are created in the program: chan1 and chan2. The addNumberToChan() function writes data to both channels periodically. The select function monitors both channels and reads data from them when either one is readable.

The program output is as follows.

The point I want to make with this example is that select’s case statement reads the channel without blocking, even though there is no data in the channel. This is because the case statement compiles and calls the read channel with explicitly passed in non-blocking arguments, which does not add the current goroutine to the waiting queue when no data is read, but returns it directly.

The range can be used to continuously read data from a channel as if it were traversing an array. When there is no data in the channel, it blocks the current goroutine, the same as the blocking mechanism for reading channels.

Note: If the goroutine writing to this channel exits, the system will panic when it detects this condition, otherwise the range will block permanently.