The Go language has a built-in runtime (that is, runtime) that abandons the traditional way of allocating memory in favor of autonomous management. This allows for autonomous implementation of better memory usage patterns, such as memory pooling, pre-allocation, etc. This way, you don’t need to make a system call for every memory allocation.

The Golang runtime memory allocation algorithm is derived from Google’s TCMalloc algorithm for C. The core idea is to reduce the granularity of locks by dividing memory into multiple levels of management. It manages the available heap memory in a two-level allocation: each thread maintains a separate memory pool of its own and allocates memory from that pool first, and only applies to the global memory pool when the pool is insufficient to avoid frequent competition between different threads for the global memory pool.

When Go starts a program, it first requests a block of memory from the operating system (note that this is still just a virtual address space and does not actually allocate memory), cuts it into small chunks and then manages it itself.

The arena is what we call the heap area. Go dynamically allocates memory in this area, which divides the memory into 8KB sized pages, some of which are combined and called mspan.

The spans area holds the pointers to the mspan (that is, the basic unit of memory management combined with some pages of the arena partition, which will be discussed later), and each pointer corresponds to a page, so the size of the spans area is 512GB/8KB*8B=512MB. Dividing by 8KB is to calculate the number of pages in the arena area, and multiplying by 8 is to calculate the size of all the pointers in the spans area. When creating an mspan, the corresponding spans area is filled by page, and when recycling the object, the mspan it belongs to can be easily found based on its address.

mspan: The basic memory management unit in Go, a large block of memory consisting of a contiguous 8KB page. Note that a page here is not the same thing as an OS page, which is typically several times the size of an OS page. In a nutshell: mspan is a Doubly linked list containing the starting address, the mspan specification, the number of pages, etc.

As shown below, mspan consists of a set of consecutive pages divided into objects of a certain size. 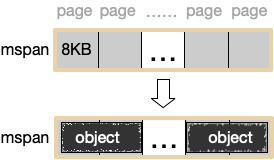 Go1.9.2 mspan of Size Class has 67 kinds, each mspan partitioned object size is a multiple of 8*2n, this is written dead in the code.

According to the Size Class of mspan, you can get the size of the object it divides. For example, if Size Class is equal to 3, object size is 32B. An object of size 32B can store objects in the size range of 17B to 32B. For tiny objects (less than 16B), the allocator will merge them and allocate several objects into the same object.

The maximum number in the array is 32768, that is, 32KB, more than this size is a large object, it will be treated specially, this will be introduced later. By the way, a type Size Class of 0 indicates a large object, which is actually allocated directly from heap memory, while small objects are allocated through mspan.

For mspan, its Size Class determines the number of pages it can be allocated, which is also written dead in the code.

For example, when we want to request a mspan of object size 32B, the corresponding index in class_to_size is 3, and the index 3 corresponds to the number of pages in the class_to_allocnpages array is 1. 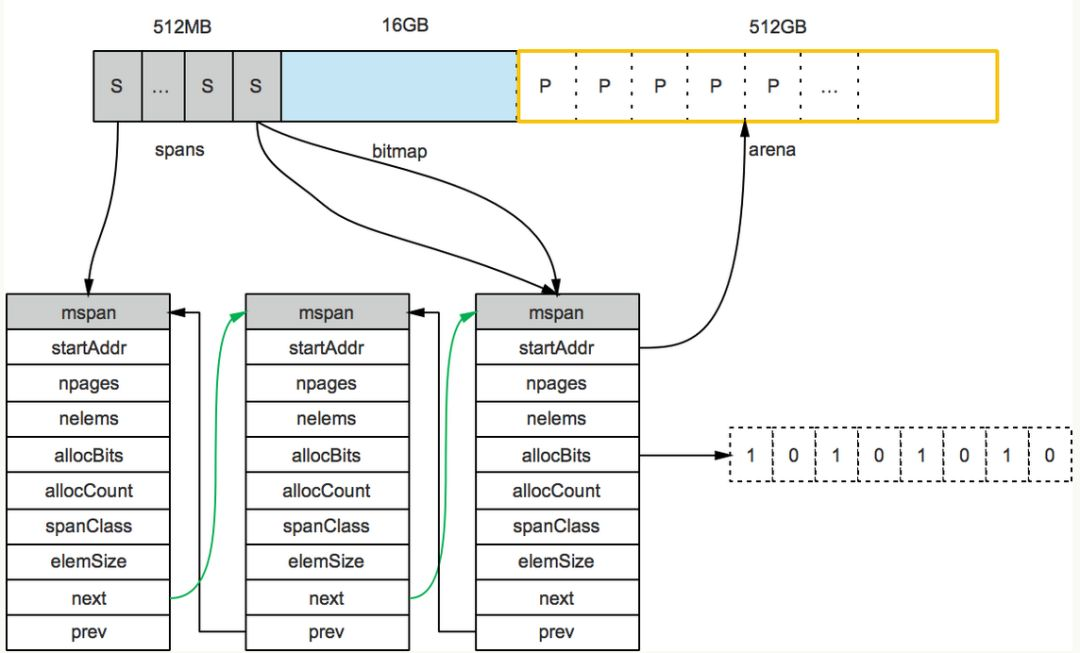 Assuming that the Size Class of the first mspan on the far left is equal to 10, according to the class_to_size array, the object size of this msapn partition is 144B, and the number of objects that can be allocated is 8KB/144B=56.89, rounded up to 56, so there will be some memory wasted. Go’s source code has the size of all mspan wasted memory of Size Class; then according to the class_to_allocnpages array, we get this mspan consists of only 1 page; suppose this mspan is allocated to pointerless objects, then spanClass is equal to 20.

startAddr points directly to a location in the arena region, indicating the starting address of this mspan, allocBits points to a bitmap, each representing whether a block has been allocated or not, and allocCount indicates the total number of objects allocated.

Thus, the parameters of each field of the first mspan from the left are as follows. 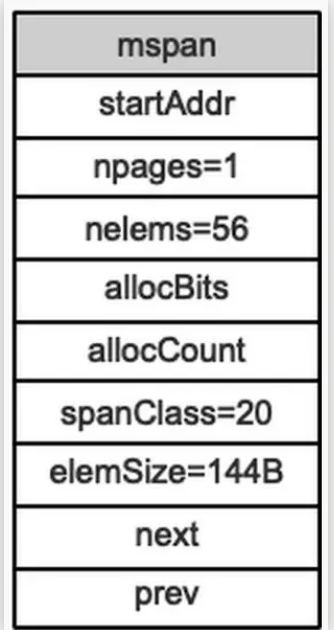 Memory allocation is done by the memory allocator. The allocator consists of 3 components: mcache , mcentral , mheap .

mcache : Each worker thread is bound to an mcache, which locally caches available mspan resources so that they can be allocated directly to Goroutines, as there is no competition from multiple Goroutines, so no lock resources are consumed.

mcache uses Span Classes as an index to manage multiple mspan for allocation, and it contains all sizes of mspan. It is twice as large as _NumSizeClasses, which is 67*2=134. Why there is a twofold relationship, as we mentioned earlier: to speed up memory reclamation afterwards, half of the objects allocated in mspan in the array do not contain pointers, and the other half contain pointers.

The mspan of a pointerless object is garbage collected without further scanning for references to other active objects. More on this in a later garbage collection article, but this time we’ll stop here.

mcache is initialized without any mspan resources and is dynamically requested from mcentral during use and cached afterwards. When the object is less than or equal to 32KB in size, mcache is allocated using the corresponding size of mspan.

mcentral: Provides a sliced mspan resource for all mcache. Each central holds a global mspan list of a specific size, both allocated and unallocated. Each mcentral corresponds to one type of mspan, and the type of mspan causes it to divide objects of different sizes. When there is no suitable (i.e., specific size) mspan in the worker thread’s mcache, it is fetched from mcentral.

mcentral is shared by all worker threads, and there is competition from multiple Goroutines, so it consumes lock resources. Structure definition. 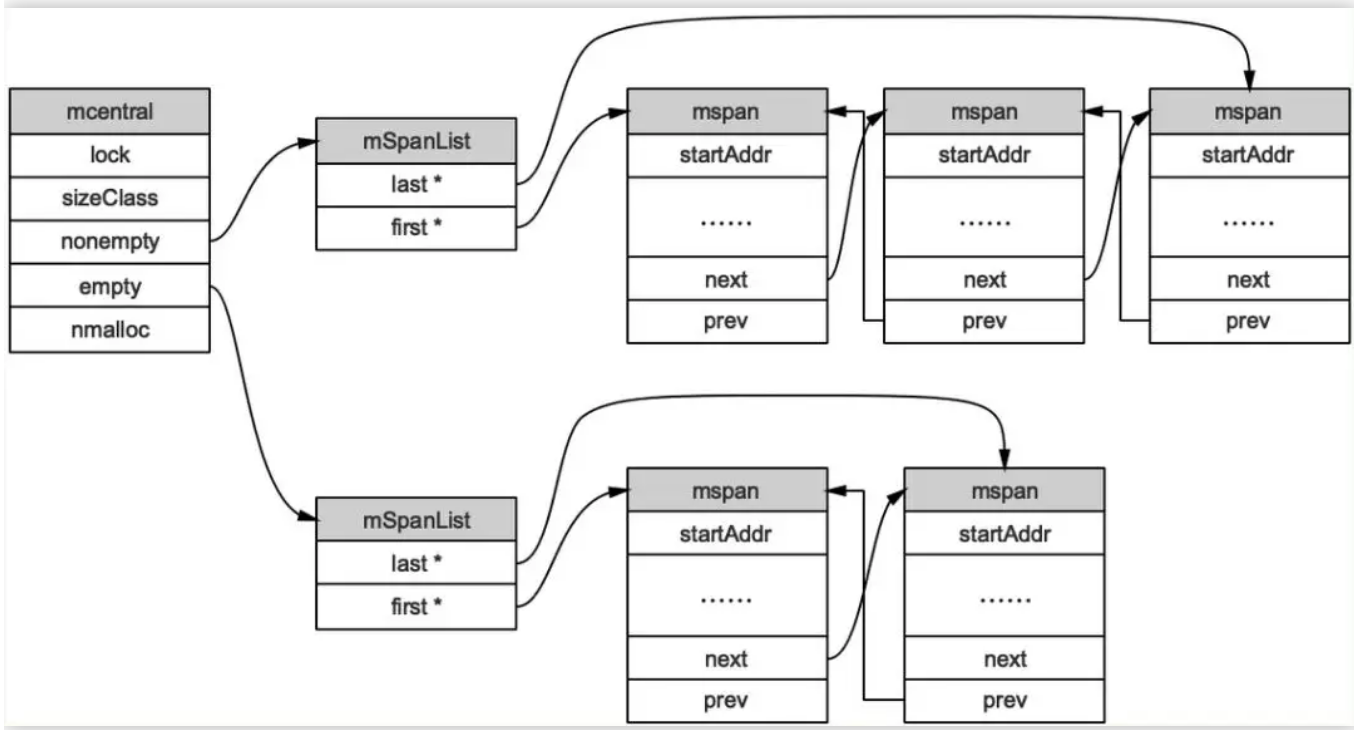 empty means that all the mspan in this linked list are either allocated object or mspan that have already been taken by cache, and this mspan is exclusive to that worker thread. And nonempty indicates a list of mspans that have free objects. Each central structure is maintained in mheap.

mheap: Represents all the heap space held by the Go program, which uses a global object _mheap of mheap to manage heap memory.

When mcentral does not have a free mspan, it requests it from mheap. And when mheap runs out of resources, it requests new memory from the OS. mheap is mainly used for memory allocation for large objects and for managing uncut mspan, which is used to cut mcentral into smaller objects.

Also we see that mheap contains mcentral of all sizes, so when an mcache requests mspan from mcentral, it only needs to use a lock in the separate mcentral and does not affect requests for mspan of other sizes. 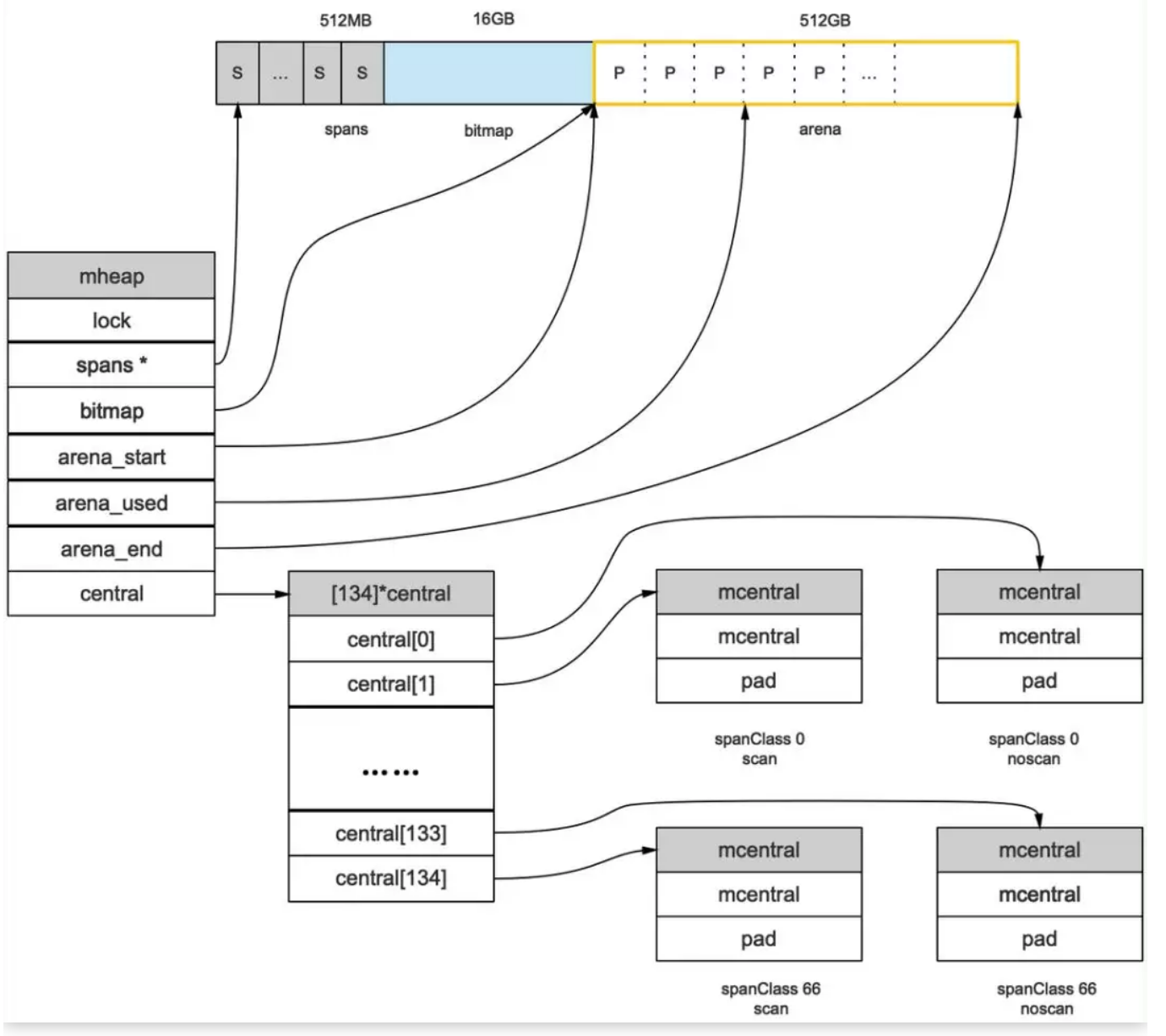