Thanks to the Go language’s excellent runtime scheduling system, developers can easily develop concurrent programs even if they have no experience in multi-threaded programming.

The core of the scheduling system is the design of the GMP, which should be seen by all readers who want to understand the Go language design in depth. However, when learning through blogs or source code, if you can’t combine it with real code, you may not understand it well enough.

This article introduces a way to visualize the Go runtime scheduling process by using the GODEBUG tool to run the actual code.

Scheduling in a Nutshell

First, let’s start with a brief review of the Go scheduling system by parsing the snapshot state through a schematic of the scheduling snapshot at a point in the program. 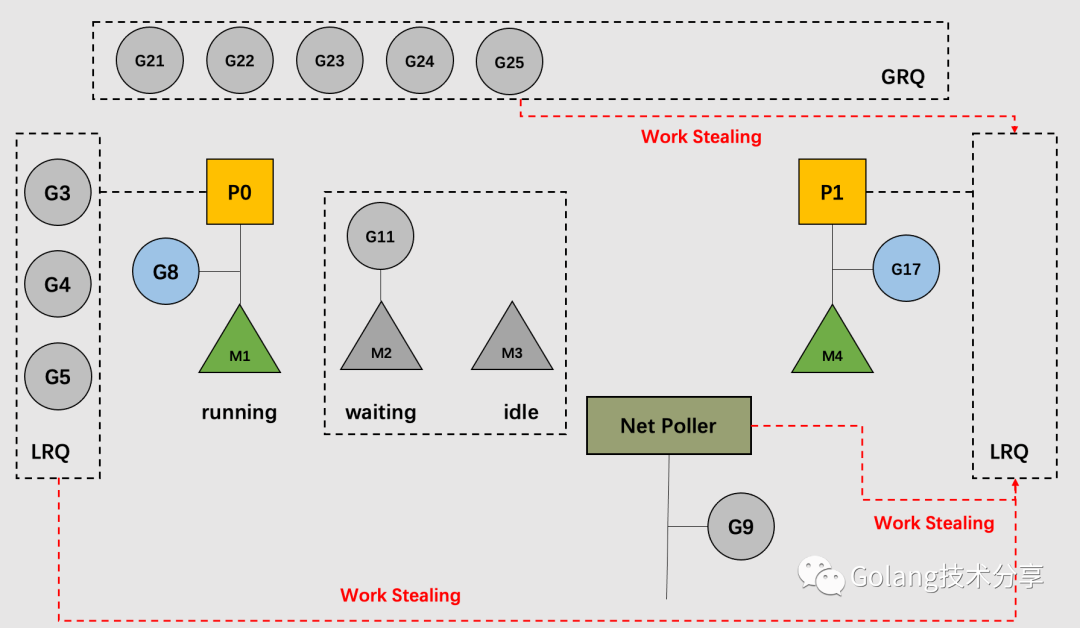 As shown above, we have set GOMAXPROCS=2, i.e. 2 processors.

At the current moment, P0 and P1 are hosting OS threads M1 and M4, which are executing code from G8 and G17, respectively; P0’s LRQ (Local Run Queue) has 3 Gs queued up, while P1’s LRQ has no waiting Gs; GRQ (Global Run Queue) has 5 Gs.

The network poller Net Poller has a G9 caught in an asynchronous network call; M2 is blocking due to some synchronous system call from G11; M3 is idle and ready to be used when M1 or M4 is blocked.

Since P1’s LRQ has no more waiting G, when G17 is scheduled, it will perform Wrok Stealing, with stealing sources from other processors P’s LRQ (in this case P1’s LRQ), GRQ and Net Poller, as specified in the runtime.schedule() function.

Enabling the GODEBUG utility is as simple as setting the environment variable GODEBUG. It allows Go programs to output debugging information during runtime and to visualize details such as scheduler or garbage collection based on parameter configuration.

A detailed description of GODEBUG can be found in the source runtime/extern.go file.

In this article we are interested in debugging the scheduler, so we will only use the two parameters of GODEBUG, schedtrace and scheddetail.

The sample code we use is as follows.

The code is relatively simple. We start 20 CPU-intensive G tasks, which are constrained by the WaitGroup. The program will only end execution when all the compute tasks of G have completed their respective accumulation.

Below, we set GODEBUG=schedtrace=1000, which means that the program’s scheduling summary is output once every 1s.

When we want to see more detailed scheduling information, we need to add the scheddetail parameter.

When the scheddetail parameter is added, the output message not only contains a one-line overview of SCHED, but also a detailed description of the status of the three GPM entities.

Once you understand the meaning of the above indicators. To make the plotting simple, we set GOMAXPROCS to 2 and select the first second of the output for visual analysis.

A snapshot of the scheduling situation at that moment is shown below. 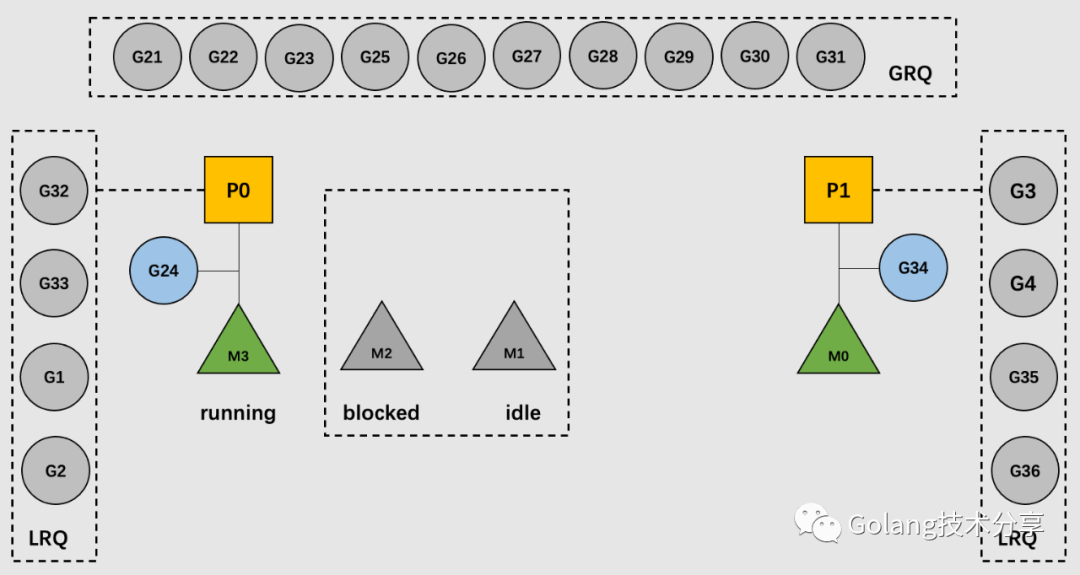 We can get the specific runs of P, M, and G based on the details. Note, however, that one thing we cannot be sure of is which specific Gs are waiting in the queue for each P’s LRQ and GRQ, but this does not affect the big picture (so the LRQs and GRQs in the figure above may not be the actual G numbers).

This article has shown that by adding the environment variable GODEBUG, we can easily view the scheduling of Go programs without making any code changes or adding additional plugins.

Readers who want to understand Go’s GMP and scheduling system more intuitively may want to give it a try.