gperftools is a very powerful set of performance analysis tools from Google. It has these three main functions:

gperftools also includes a high-performance memory allocator, tcmalloc, which we can use instead of glibc’s ptmalloc. tcmalloc comes with its own statistics, so we can rely on it for memory analysis and checking memory leaks.

This article describes some common uses of gperftools on Linux. If you need to use gperftools to analyze Linux (server) programs, this article can be used as a Quick Start.

Download the stable version from the gperftools release page. If Linux is a 64-bit version, gperftools recommends installing libunwind. This is usually done directly using yum or apt. After unpacking, execute the following command directly.

This installs libraries such as libprofiler.so and libtcmalloc.so, the performance report generator pprof, and a bunch of header files.

In order to use the CPU performance analysis feature, we need to link the shared library libprofiler into the executable. gperftools recommends adding the -lprofiler option to the (compile) link, for example:

This does not turn on performance collection at runtime, it just inserts profiler code. If it is not turned on, the program will not be affected. Therefore gperftools recommends always adding -lprofiler to the development environment, which is what they do at Google.

In many cases we don’t want to collect performance data for the whole process. In multi-process scenarios, we also want to collect performance data from processes with a specific ID. gperftools supports the use of signals to control performance collection on/off: we can use the environment variable CPUPROFILESIGNAL to specify a switch signal. The first time a program receives the specified signal, it will turn on performance collection, and the second time it receives it, it will turn it off. For example.

The default collection rate for gperftools is 100 times per second. We can also use the environment variable CPUPROFILE_FREQUENCY to specify the collection frequency. For example.

On Linux servers we usually use pprof to export analysis reports in pdf format. pprof relies on dot and ps2pdf to draw and generate pdfs, so we need to install them first.

As in the above . /server example, use the following command to export the pdf. 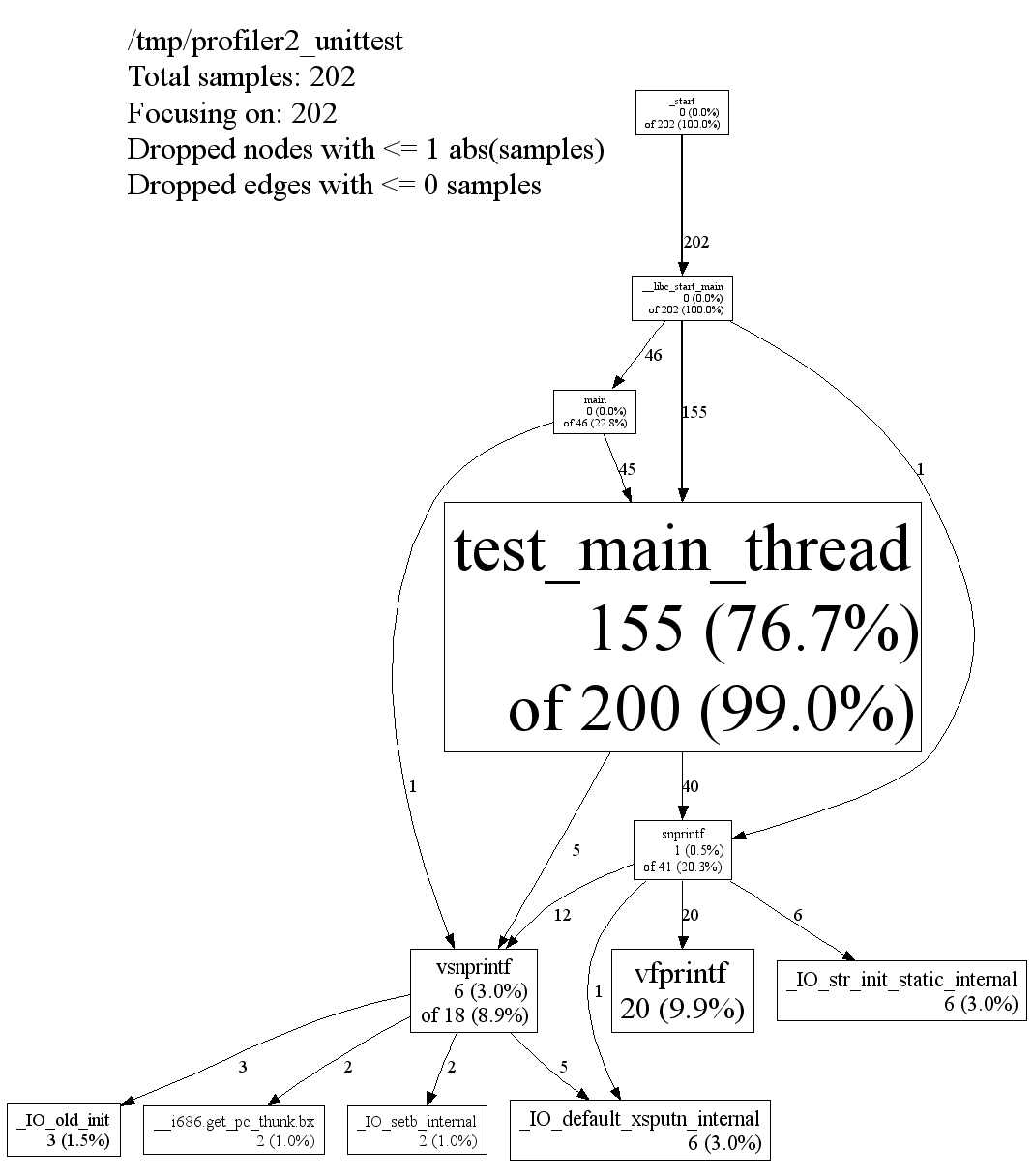 pprof omits some of the smaller nodes and edges when exporting the report. We can also specify the omission threshold with the parameter.

gperftools will count the memory usage of the current program every once in a while and generate a result file. As in the example above, the environment variable HEAPPROFILE=server , generates a series of result files like this.

The default statistics rule for gperftools is to count every 1 GB allocated to the program, or every 100 MB occupied. This behavior can also be controlled by environment variables

We also use pprof to export the memory analysis report. Remember to install dot and ps2pdf . 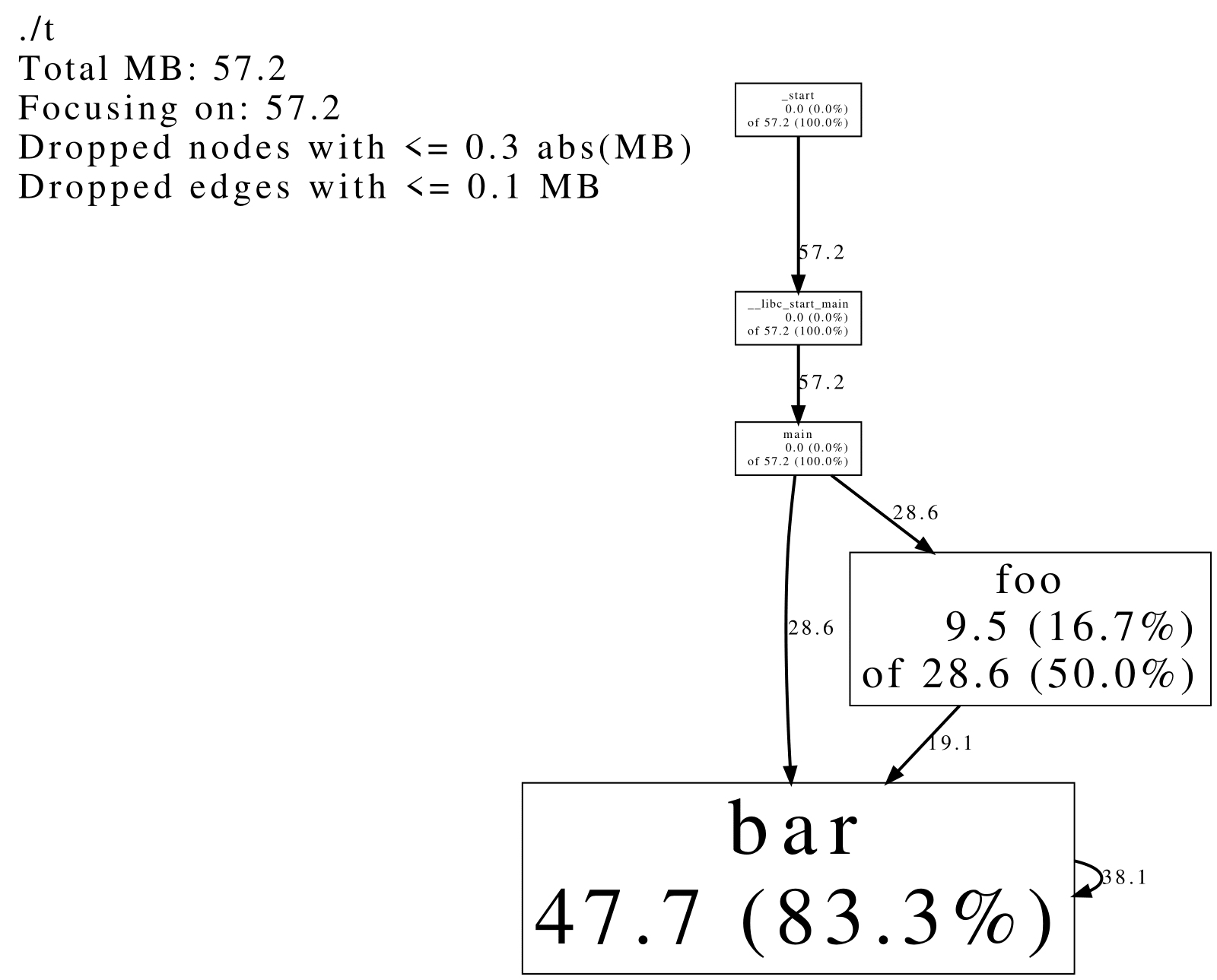 The memory analysis report clearly shows how much memory each function occupies, and this data can help us check for memory leaks. For example, by comparing the amount of memory occupied by a function at each point in time, if the memory occupied by a function keeps growing, it means that the function is likely to have a memory leak. pprof provides the --base parameter to help us compare the memory changes at two points in time.

The result shows that 6 objects are leaking, and shows the size of each object. Finally, we are prompted to use the -pprof command to get a more detailed report. On the server we can’t use the -gv option, we can use -pdf to export a pdf instead. 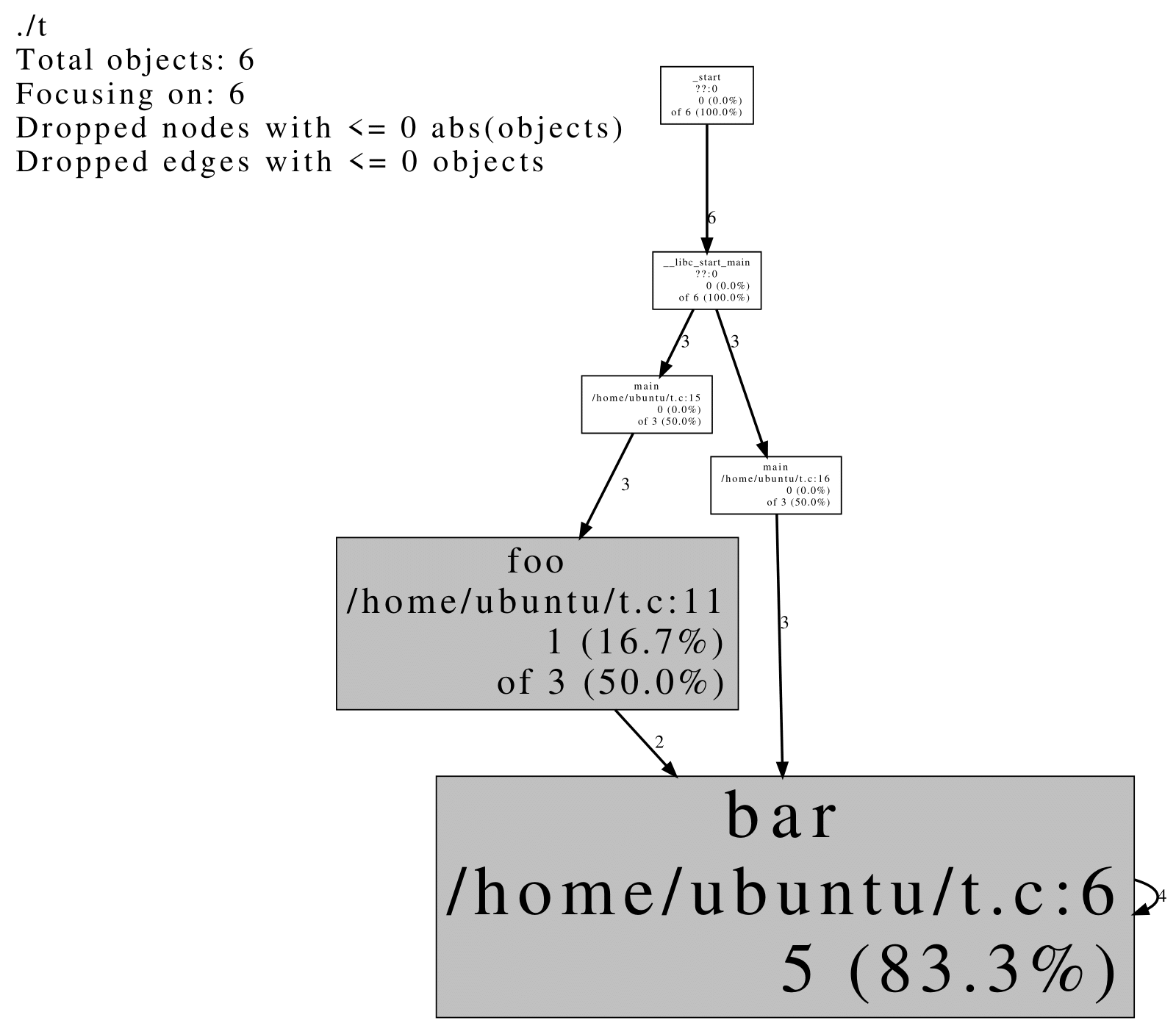 How to detect memory leaks

When HEAPCHECK=normal is set, gperftools’ memory checking tool detects leaked objects instead of leaked memory . Memory that is allocated but not freed is not necessarily considered to be leaked, only objects that are not accessible are considered to be leaked. gperftools treats properly aligned sequences of bytes in memory as pointers, and checks that objects allocated in the heap are not pointed to by these “pointers”. If not, then the object is leaking. For example, the following code will not report a memory leak, even though there is unfree memory.

Therefore, memory leak checking cannot be guaranteed to be 100% accurate. In addition, it is possible that some sequence of bytes in memory may have a value equal to an allocated object, and although the probability of this is low, if the object happens to be leaking, gperftools will not detect it.

Although normal is the most common, we can set HEAPCHECK to other values to modify the memory leak detection method.

There are some more advanced uses of gperftools, for example, we can control when to turn on and off statistics, or ignore memory leaks in certain code, through the programming interface provided by gperftools. This can help us analyze program performance in a more targeted way. When turning on collection and statistics, gperftools also supports some environment variables to control their behavior more precisely. When exporting reports, pprof supports some advanced parameters, such as focusing on specific functions, or ignoring specific functions; exporting reports in different formats, etc. For more information on these uses, see the gperftools documentation, which is available in the gperftools/docs directory.