Why use cluster federation

Kubernetes has claimed to support up to 5,000 nodes and 150,000 Pods in a single cluster since version 1.8, and few companies actually deploy such a large single cluster. In many cases, we may deploy multiple clusters for a variety of reasons, but want to manage them in a unified manner, so we can use cluster federation.

The earliest multi-cluster project, proposed and maintained by the K8s community.

Federation v1 was started around K8s v1.3 (Design Proposal), and related components and command line tools (kubefed) were released in later versions to help users quickly build federation clusters, and entered the Beta phase at v1.6; however, Federation v1 entered After the Beta, there was no further development, and it was officially abandoned around K8s v1.11 due to flexibility and API maturity issues. 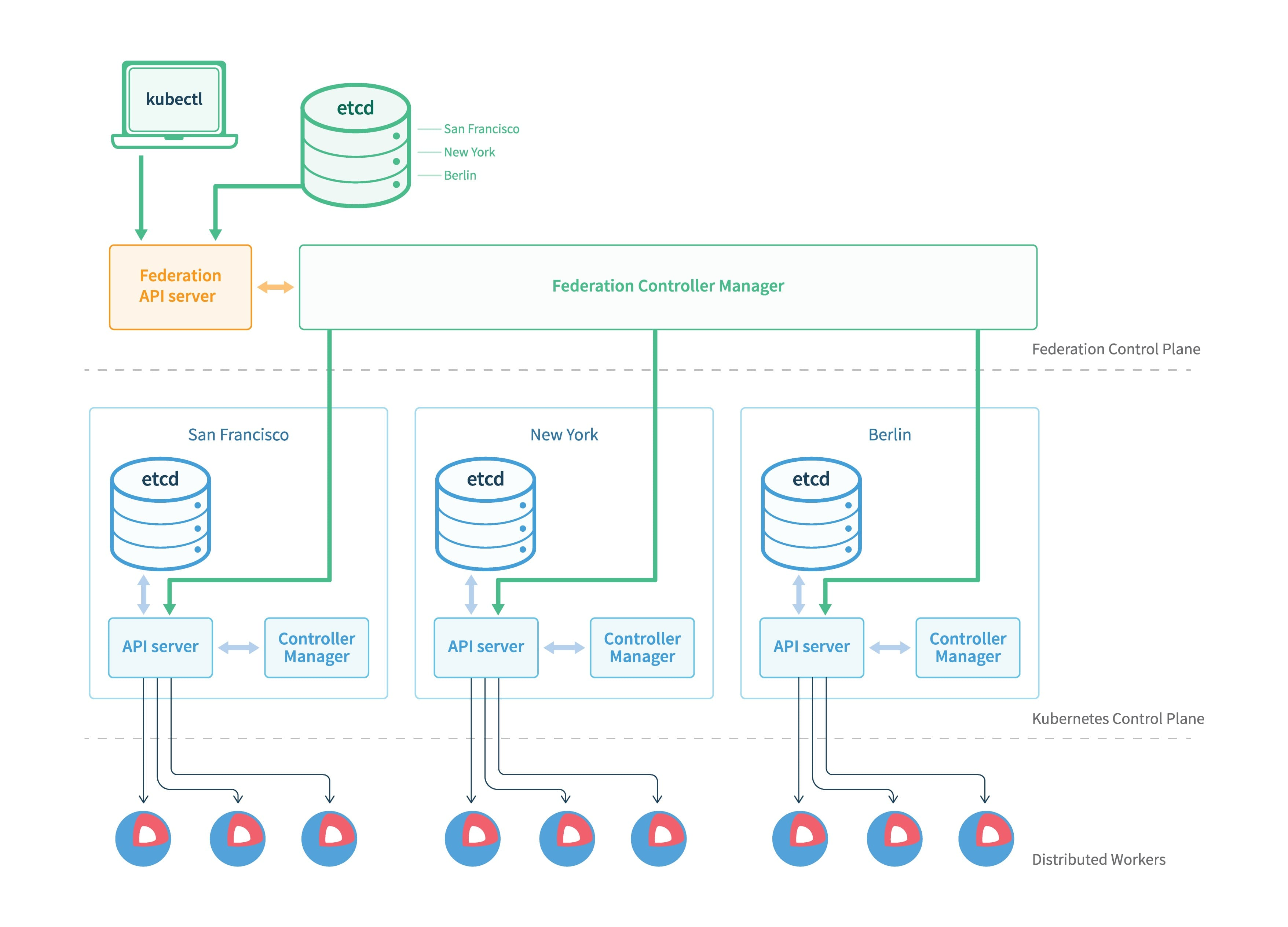 The basic architecture of v1 is shown in the figure above, with three main components. 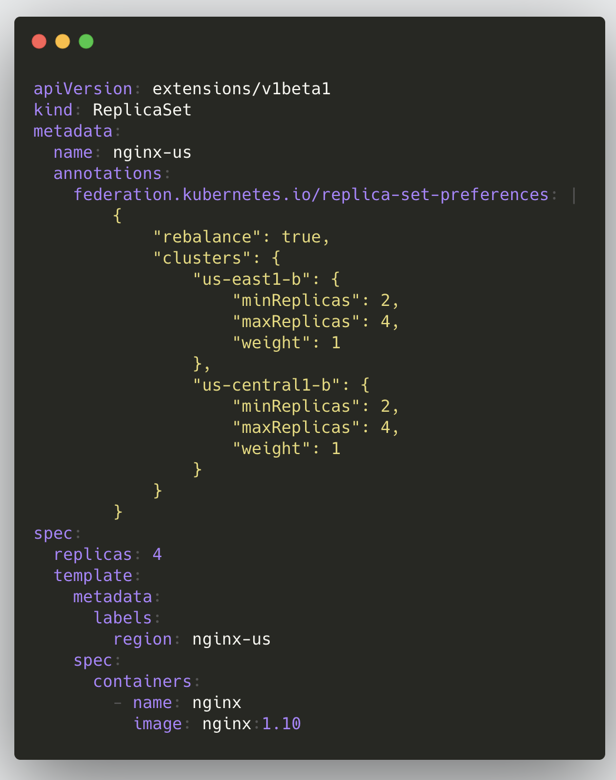 There are two main problems associated with this architecture.

With the experience and lessons learned from v1, the community has proposed a new cluster federation architecture: Federation v2; the evolution of the Federation project can also be found in the article Kubernetes Federation Evolution.

The general process to create a federated resource in v2 is as follows. 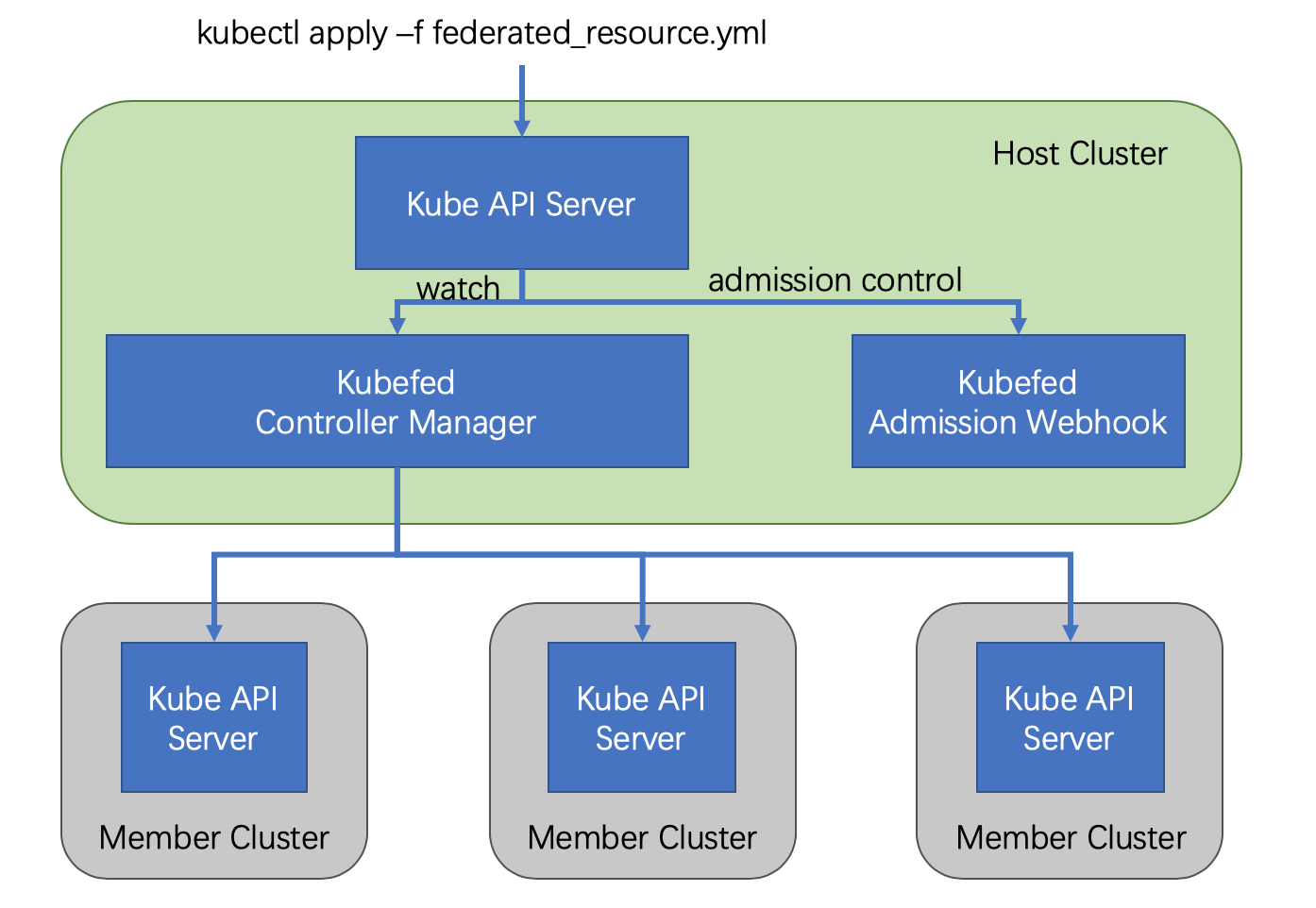 This is used to store API authentication information for federated clusters and can be used to join/remove clusters via kubefedctl join/unjoin. When successfully joined, a KubeFedCluster CR is created to store cluster related information such as API Endpoint, CA Bundle and Token. The controller-manager will later use this information to access different Kubernetes clusters. 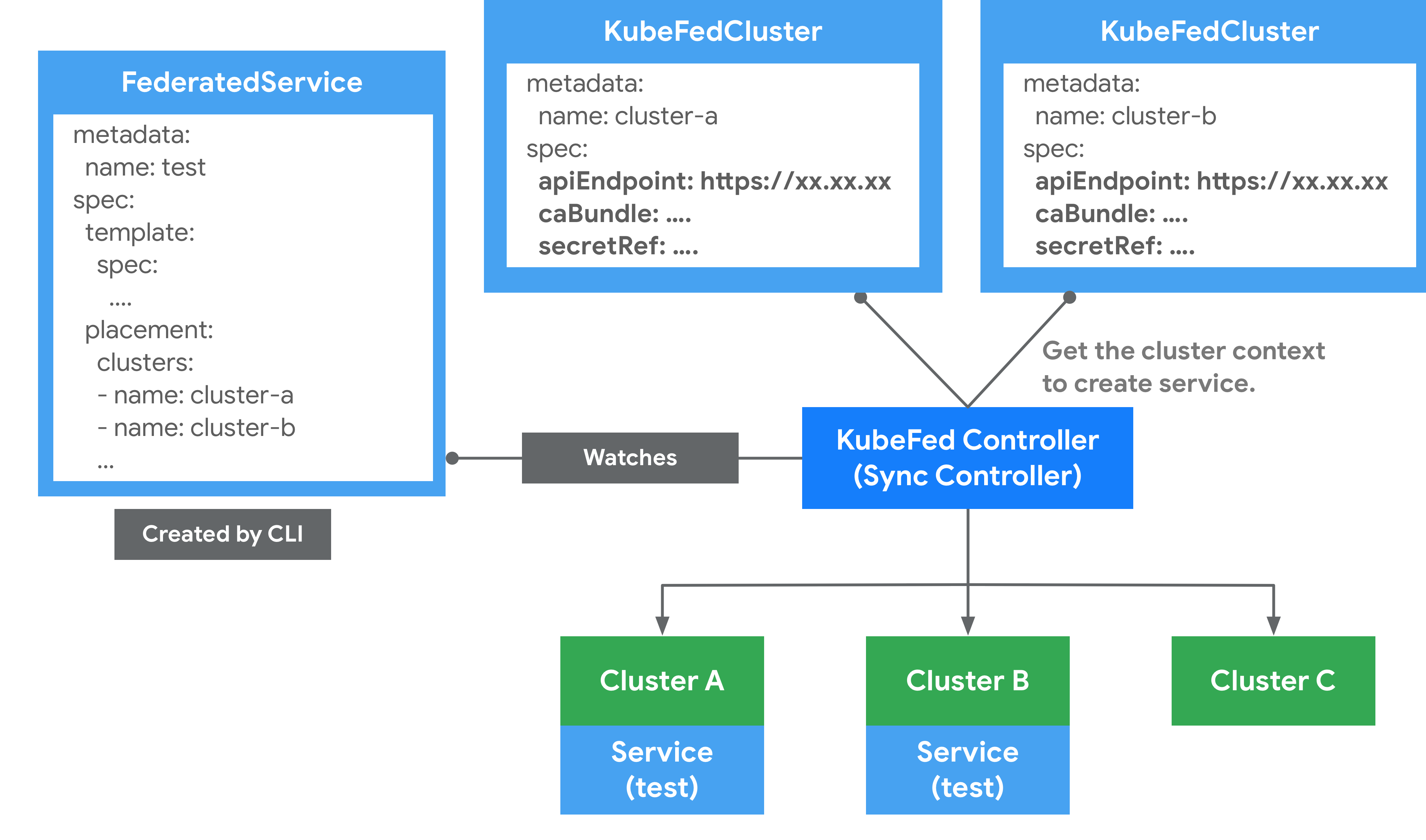 defines which Kubernetes API resources are to be federated; for example, if you want to federate ConfigMap resources across clusters, you must first create the new resource FederatedConfigMap in the Host cluster via CRD, then create the configmaps resource with the name Type configuration (FederatedTypeConfig) resource with the name configmaps, and then describe the ConfigMap to be managed by the FederatedConfigMap so that the Kubefed controller-manager knows how to create the Federated resource. An example is as follows.

There is another key CRD: Federated Resource. If you want to add a new resource to be federated, you need to create a new FederatedXX CRD that describes the structure and distribution strategy of the corresponding resource (to which clusters it needs to be distributed); the Federated Resource CRD consists of three main parts Templates

An example is shown below.

These FederatedXX CRDs can be created by kubefedctl enable <target kubernetes API type>, or you can generate/write the corresponding CRDs yourself and create them again.

Combined with the Cluster Configuration, Type Configuration and Federated Resource CRD introduced above, the overall architecture and related concepts of the v2 version are much clearer. 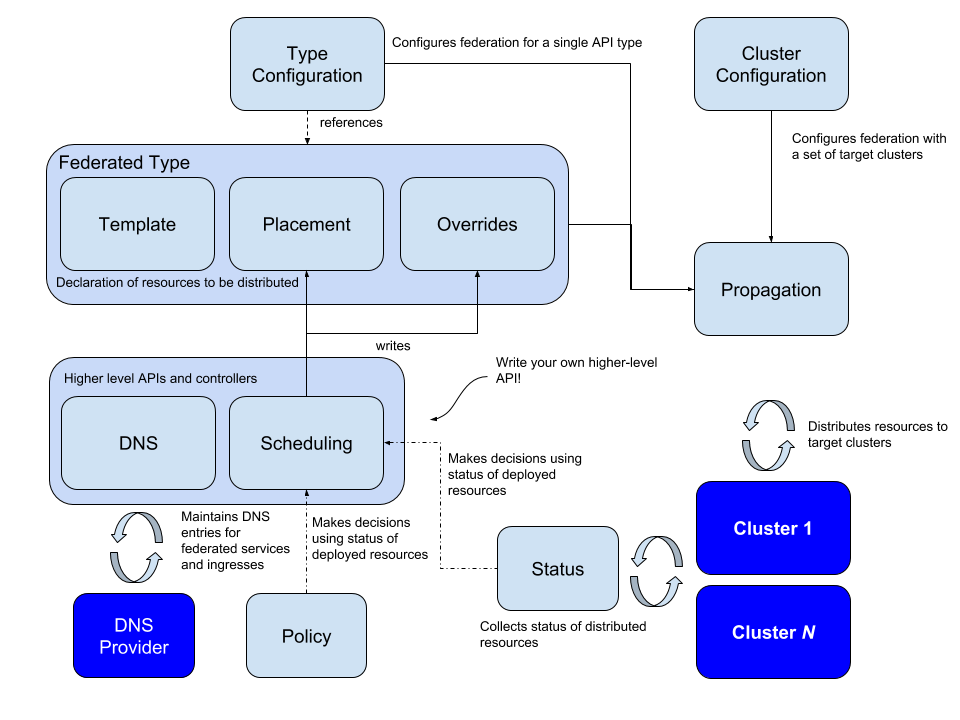 Kubefed can currently only do some simple inter-cluster scheduling, i.e., manual designation, for manual designation of scheduling is divided into two main parts, one is directly in the resource to set the destination cluster, and the other is through ReplicaSchedulingPreference for proportional allocation.

If you need to schedule differently across multiple clusters, you need to introduce ReplicaSchedulingPreference for scaled scheduling.

totalReplicas defines the total number of replicas, clusters describes the maximum/minimum replicas for different clusters and the weights.

Karmada is a multi-cloud container orchestration project open-sourced by Huawei. This project is a continuation of Kubernetes Federation v1 and v2, and some basic concepts are inherited from these two versions. 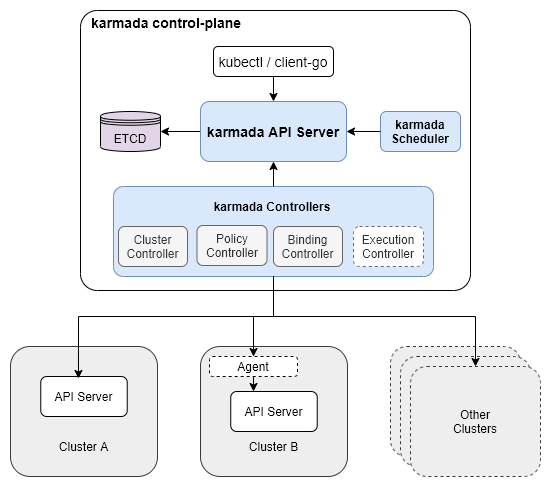 Similar to Federation v1, we have to write a resource to Karmada’s own API Server, before controller-manager distributes resources to each cluster according to some policies; however, this API Server is native to K8s, so it supports any resources and will not have the problems in the previous The distribution policy of federated resources is also controlled by a separate CRD, and there is no need to configure Federated Resource CRD and Type Configure in v2.

Some basic concepts of Karmada. 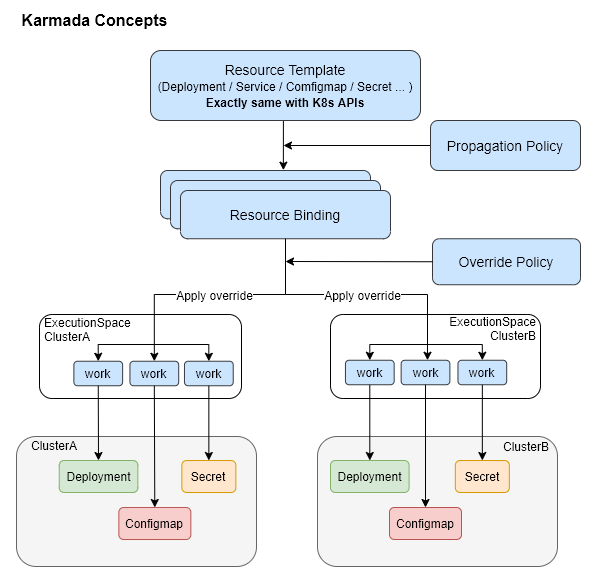 Cluster resource records are similar to Federation v2 in that they contain the necessary information to access the managed cluster: API Endpoint, CA Bundle, and Access Token.

But one difference is that there are two sync modes for Karmada’s Cluster resources: Push and Pull; Push is the most common and common way, the Karmada component of the host cluster will be responsible for synchronizing and updating the status of such clusters; Pull mode member clusters will run a karmada-agent component, which collects its own state and updates the state of the host cluster’s corresponding Cluster resources.

To distribute resources to member clusters in Karmada, you need to configure this separate PropagationPolicy CR; take the following nginx application as an example, starting with the Resource Template, which is the normal K8s Deployment .

You can then configure a PropagationPolicy to control the distribution policy for this nginx Deployment resource. In the example below, the nginx application is distributed to the member1 and member2 clusters on a 1:1 weighting.

However, note that this does not mean that the application is running on the cluster where the Karmada API Server is located. In fact, there is no workload on this cluster, it just stores these Resource Templates, and the actual workloads are running in the member1 and member2 clusters configured in PropagationPolicy above, which can be seen by switching to the member1/member2 cluster.

The distribution policy also supports LabelSelector, FieldSelector and ExcludeClusters in addition to the most common cluster name specified above, and if all these filters are set, only clusters with all conditions met will be filtered out; in addition to cluster affinity, it also supports SpreadConstraints: dynamic grouping of clusters by region, zone and provider, which allows you to distribute applications to only certain types of clusters.

For resources with replicas (such as the native Deployment and StatefulSet), it supports updating this number of replicas as required when distributing resources to different clusters, e.g. I want 2 replicas for nginx applications on member1 cluster and only 1 replica for member2; there are a number of policies. The first is ReplicaSchedulingType, which has two optional values.

This ReplicaDivisionPreference in turn has two optional values.

The full and detailed structure can be found in Placement’s API definition.

Override Policy is as simple as adding the OverridePolicy CR to configure different clusters with different configurations, see an example directly.