According to the BBC, Tesla CEO Musk has successfully acquired Twitter entirely for $54.20 per share, for a total of $44 billion, and the company will then become a privately held entity.

In a press release, Musk explained that he would work to make Twitter better than ever and promised to focus more on free speech.

Free speech is the cornerstone of a functioning democracy, and Twitter is the digital town square. It’s where people discuss issues that are critical to the future of humanity.

I also want to make Twitter better than ever by enhancing the product with new features, making algorithms open source to increase trust, defeating spambots, and authenticating everyone.

Twitter has tremendous potential - I look forward to working with the company and the user community to unlock it. 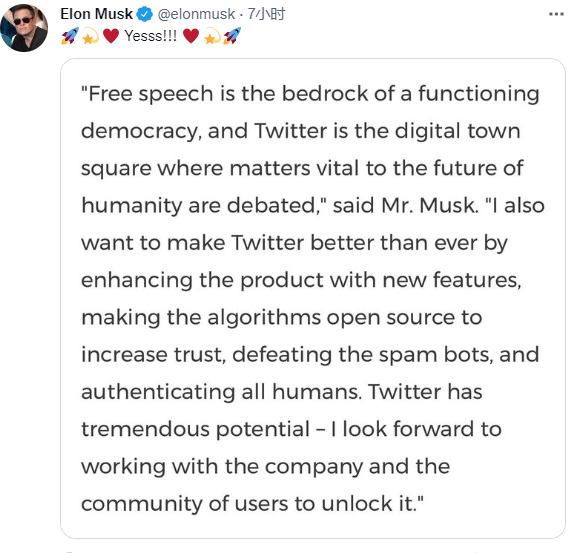 Earlier, on April 15, Musk was in Canada for Ted2022 and said that Twitter’s code should be open sourced on GitHub so that the public can examine it.

In fact, within hours of the Musk acquisition, Twitter’s GitHub home page had an additional “the-algorithm” repository, which is still empty but has already garnered 5K+ Stars.

The algorithm repository has been removed and the link shows 404 for unknown reasons (maybe GitHub decided it was cheating because the number of stars was growing too fast?) .