In the previous note, we learned about a typical principle of VPN through TUN/TAP devices when introducing network devices, but did not practice how TUN/TAP virtual network devices specifically function practically in linux. In this note we will look at how a very typical IPIP tunnel in the cloud computing field is implemented through TUN devices.

As we mentioned in the previous note, the TUN network device can encapsulate a Layer 3 (IP) network packet within another Layer 3 network packet, and it looks like the packet sent out through the TUN device will look like this.

Some other useful parameters.

Note: The nopmtudisc option is not compatible with fixed ttl, if the fixed ttl parameter is used, the system will turn on Path MTU Discovery.

Let’s start with the most basic one-to-one IPIP tunneling mode as an example to introduce how to build IPIP tunnels in linux to communicate between two different subnets.

Before you start, it should be noted that not all linux distributions load the ipip.ko module by default. You can check if the kernel loads the module by using lsmod | grep ipip; if not, use modprobe ipip to load it first; if everything is fine then it should look like this.

Now it’s time to start building the IPIP tunnel. Our network topology is shown in the following figure. 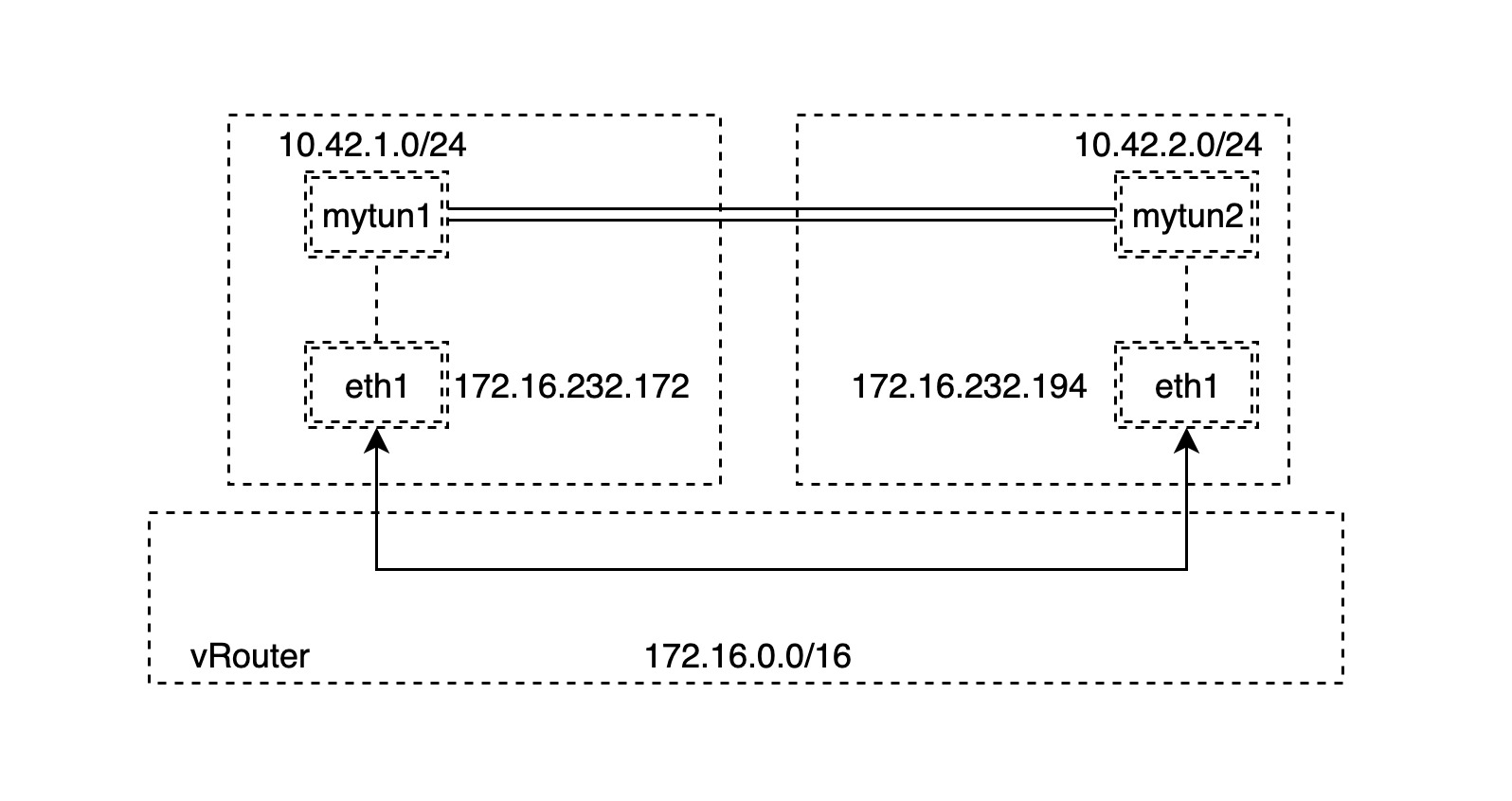 There are two hosts A and B in the same network segment 172.16.0.0/16, so they can be connected directly. What we need to do is to create two different subnets on each of the two hosts.

To simplify things, we first create the bridge network device mybr0 on node A and set the IP address to the gateway address of the 10.42.1.0/24 subnet, then enable mybr0.

Similarly, a similar operation is then performed separately on node B.

Next, we separately on two nodes A and B

Note: Step 3 is to save and simplify the steps of creating subnets by setting the gateway address directly without creating additional network devices.

In order to ensure that we access subnets on two different hosts through the IPIP tunnel created, we need to manually add the following static route.

The routing table for host AB is now shown below.

At this point we can start verifying that the IPIP tunnel is working properly:

Yes, it can ping through, and we grab the data at the TUN device via tcpdump.

Up to this point, our experiment was successful. However, it should be noted that if we are using gre mode, it is possible that we need to set up a firewall to allow the two subnets to interoperate, which is more common in building IPv6 tunnels.

To illustrate, suppose we now have three nodes in the same Layer 3 network.

Attach three different subnets on each of these three nodes at the same time.

Similarly, a similar operation is then performed on nodes B and C, respectively.

Our ultimate goal is to build IPIP tunnels between each of the three nodes to ensure that the three different subnets can communicate directly with each other, so the next step is to create the TUN network device and set up the routing information. On nodes A and B, respectively.

At this point we can start verifying that the IPIP tunnel we built is working properly.

Everything seems to work fine, and if we reverse the process and ping the other subnets from node B or C respectively, we can get through. This shows that we can indeed create one-to-many IPIP tunnels, and this one-to-many pattern is very useful in creating overlay communication models in some typical multi-node networks.

We then grab the data via tcpdump on the TUN devices in B and C respectively.

In fact, from the process of creating one-to-many IPIP tunnels we can roughly guess that the Linux ipip module gets the internal IPIP packet based on routing information and then encapsulates it with an external IP into a new IP packet. As for how to unpack IPIP packets, let’s look at the process of ipip module to receive packets.

As you can see, the ipip module will unblock the packet according to its protocol type, and then do it again with the unblocked skb packet. The above is just some very superficial analysis, if you are interested, we recommend to go to see more source code implementation of ipip module.