IPVLANs are similar to MACVLANs in that they both virtualize multiple virtual network interfaces from a single host interface. An important difference is that all virtual interfaces have the same mac address and different ip addresses.

Because all virtual interfaces share a mac address, there are some things to keep in mind.

Ipvlan is a relatively new feature of the linux kernel. The linux kernel started to support ipvlan in 3.19, but the recommended version is >=4.2 (because of a bug in docker support for previous versions), see the kernel directory for the code: /drivers/net/ipvlan/.

A simple way to create an ipvlan is

ipvlan functions a bit like a router, it does the job of routing and forwarding different network messages between each virtual network and the host network. As long as the parent interface is the same, virtual machines/containers can ping each other even if they are not on the same network, because ipvlan does the message forwarding in the middle.

Note that virtual interfaces in L3 mode do not receive multicast or broadcast messages (in this mode, all networks are sent to the parent interface, and all ARP processes or other multicast messages are done at the underlying parent interface). In addition, the external network is not aware of the ipvlan virtual network by default, and the ipvlan network cannot be accessed directly by the external router without configuring the corresponding routing rules on the external router. 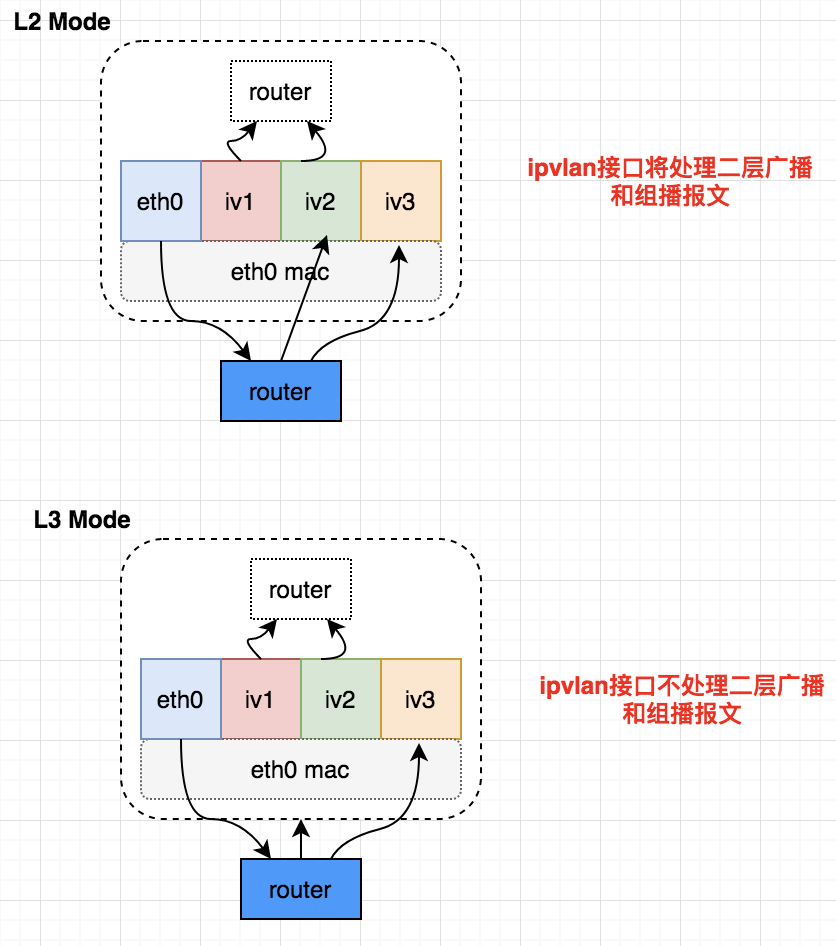 Note that the MAC addresses of ipvlan1 and ipvlan2 are the same as those of the ens224.

catch ARP messages, the results can not catch ARP in L3 mode, indicating that layer 2 broadcast and multicast are not handled, working in L3.(This is the difference with L2 mode)

Create L2 mode, the rest of the operation is the same as L3

The cni configuration format is

It is important to note that