Network Virtualization is the process of building a virtual network with a different topology than the physical network. For example, if a company has multiple offices around the world, but wants its internal network to be one, it needs network virtualization technology.

Suppose one machine in the Beijing office has an IP of 10.0.0.1 (which is an intranet IP and cannot be used on the Internet) and one machine in the Shanghai office has an IP of 10.0.0.2 and they want to communicate over the Internet. The public (Internet) IP of the Beijing office is 1.1.1.1, and the public IP of the Shanghai office is 2.2.2.2.

But there are serious problems with this approach. Imagine that the Shanghai office adds a machine with an intranet IP of 10.0.0.3. Regardless of what happens in the Beijing office, the border router in the Shanghai office receives a packet with a destination IP of 2.2.2.2.2, should it send it to 10.0.0.2 or 10.0.0.3? This bug seems simple enough, but it is easy for designers to overlook. When designing a network topology or network protocol, you can’t just think about how the packets go out, but also how the reply packets come in. With simple NAT, every time you add an intranet machine, you add a public IP to the border router.

We know that public IPs are valuable, and NAPT (Network Address and Port Translation) was born, and NAT in Linux is in fact NAPT. For incoming connections, the basic assumption of NAPT is that two machines sharing the same public IP will not provide the same service. For example, if 10.0.0.2 provides HTTP service and 10.0.0.3 provides HTTPS service, the border router in Shanghai office can be configured as “Destination IP is 2.2.2.2 and destination port is 80 (HTTP) to 10.0.0.2, destination port is 443 (HTTPS) to 10.0. 0.3”. This is DNAT (Destination NAT).

We know that public IPs are a valuable resource, and NAPT (Network Address and Port Translation) was born, and NAT in Linux is in fact NAPT. For incoming connections, the basic assumption of NAPT is that two machines sharing the same public IP will not provide the same service. For example, if 10.0.0.2 provides HTTP service and 10.0.0.3 provides HTTPS service, the border router in Shanghai office can be configured as “Destination IP is 2.2.2.2 and destination port is 80 (HTTP) to 10.0.0.2, destination port is 443 (HTTPS) to 10.0. 0.3”. This is DNAT (Destination NAT).

NAPT requires that two machines sharing a public IP cannot provide the same service, a restriction that is many times unacceptable. For example, we often need SSH or remote desktop to each machine. Tunneling technology was born. The simplest Layer 3 tunneling technology is IP-in-IP.

As shown above, the original IP packet is in black on a white background, and the header is added in white on a blue background. This header is usually added (encap) on the sender’s border router. The encapsulated header is first a Link Layer header, then a Network Layer header, and the entire packet is a legitimate IP packet that can be routed over the Internet. When the receiving border router receives this packet, it sees the IP-in-IP flag in the added header (IP protocol number = 0x04, not shown in the figure), and knows that it is a packet of IP-in-IP tunnel; it also sees that the public DIP is itself, and knows that it is time to decap. After the decap, the original packet (Private SIP, Private DIP) is revealed and then routed to the corresponding machine on the intranet.

IP-in-IP Tunneling is not enough.

When looking at a network virtualization technology, the main thing to look at is the format of the packets in the tunnel. 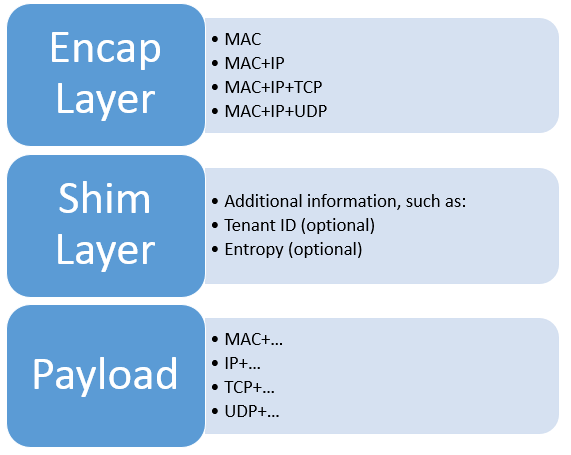 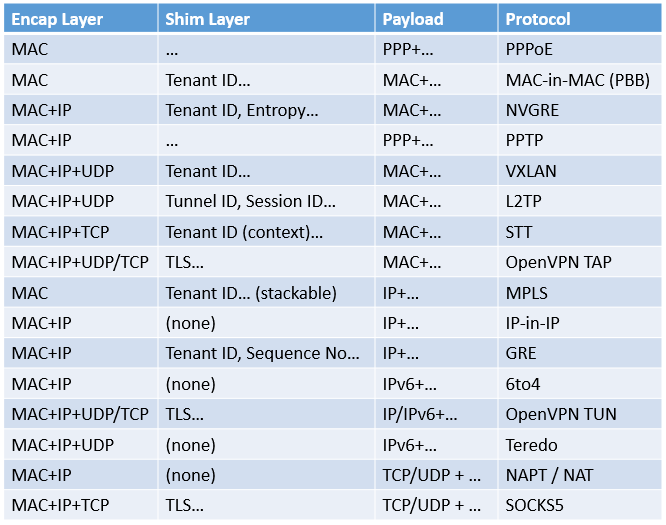 It follows that there are corresponding protocols for almost every reasonable combination of Encap Layer and Payload. Therefore, the statement that some people “add a Layer 2 header to GRE and you can …… it” is meaningless; once Encap Layer and Payload change, it is some other protocol. Here are some examples of protocols that exist at different levels, i.e., what problems it solves.

The GRE (Generic Routing Encapsulation) protocol adds an intermediate layer (shim layer) to the IP-in-IP protocol, including a 32-bit GRE Key (Tenant ID or Entropy) and sequence number information. The GRE Key solves the second problem of the IP-in-IP tunnel by allowing different clients to share the same physical network and set of physical machines, which is important in a data center.

The GRE virtual network is an IP network, which means that IPv6 and ARP packets can not be transmitted in the GRE tunnel. IPv6 is easier to solve, just change the Protocol Type in the GRE header. The ARP request packet is a broadcast packet: “Who has 192.168.0.1? Tell 00:00:00:00:00:01”, which reflects a fundamental difference between Layer 2 and Layer 3 networks: Layer 2 networks support the Broadcast Domain. Broadcast Domain. VLANs are a common way to implement a broadcast domain.

In order to support all existing and possible future Layer 3 protocols, and to support broadcast domains, it is necessary that the client’s virtual network be a Layer 2 network. NVGRE and VXLAN are the two best known Layer 2 network virtualization protocols. 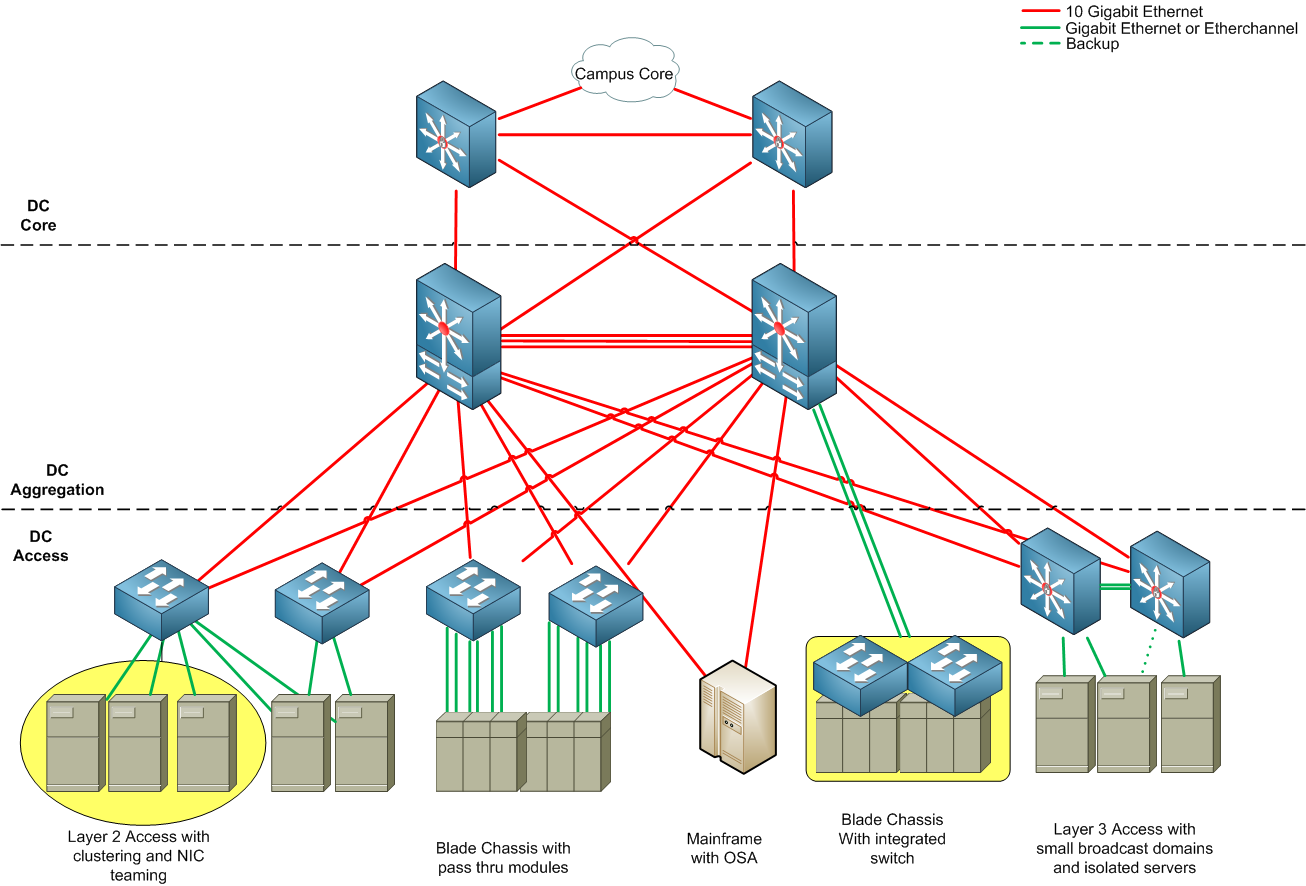 Virtual networks are generally not called “virtual networks” if they are at a higher level and do not include a network layer in the payload, but they still fall under the category of tunneling technology. SOCKS5 is one such protocol where the payload is TCP or UDP. It has more configuration flexibility than IP-based tunneling, for example, you can specify port 80 (HTTP protocol) for one tunnel and port 443 (HTTPS protocol) for another. ssh’s -L (local forwarding) and -D (dynamic forwarding) parameters are used in the SOCKS5 protocol. the downside of SOCKS5 is that it does not support arbitrary Layer 3 protocols, such as ICMP (SOCKS4 does not even support UDP, so DNS is a bit tricky to handle).

NVGRE has an 8-bit entropy field, but if the network device doing load balancing does not know NVGRE protocol, it still does hash based on the five-tuple of “source IP, destination IP, quad protocol, source port, destination port”, the entropy is still not useful.

The solution for VXLAN (Virtual Extensible LAN) is to add a UDP layer to the encapsulation layer in addition to MAC and IP layers, and use the UDP source port number as the entropy and the UDP destination port number as the VXLAN protocol identity. This way, the load balancing device does not need to know the VXLAN protocol, it just needs to do hash of the packet according to the normal UDP quintet.

The VXLAN mezzanine is slightly simpler than the GRE mezzanine, still using 24 bits as the Tenant ID and no Entropy bits. The network device or OS virtualization layer that adds the packet header typically makes a copy of the source port of the inner payload and uses it as the UDP source port for the encapsulation layer. Since the OS that initiates the connection chooses the source port number, it is generally incremental or random, and the hash algorithm inside the network device is generally XOR, so the hash uniformity is generally better.

STT (Stateless Transport Tunneling) is a new network virtualization protocol that was proposed in 2012 and is still in draft form; STT, compared to VXLAN, at first glance appears to be just replacing UDP with TCP, but in fact, if you catch packets on the network that have been packetized by STT and VXLAN, they are very different.

Why does STT use TCP? In fact, STT only borrows the shell of TCP and does not use the state machine of TCP at all, not to mention the acknowledgement, retransmission and congestion control mechanisms. LSO enables the sender to generate TCP packets of up to 64KB (or even longer), and the NIC hardware to split the TCP payload part of the large packet, copy the MAC, IP, and TCP packet headers, and form a small packet (e.g., 1518 bytes for Ethernet, or 9K bytes with Jumbo Frame enabled) that can be sent out at Layer 2. The LRO allows the receiver to combine several small packets of the same TCP connection into one large packet and then generate a NIC interrupt to send to the operating system.

As shown in the figure below, the STT Frame Header (middle layer) and the MAC header, IP header, and TCP-like header (encapsulation layer) are added to the Payload before it is sent out. The NIC’s LSO mechanism will break the TCP packet into smaller pieces, copy the encapsulation layer and add it to the front of each piece before sending it out. 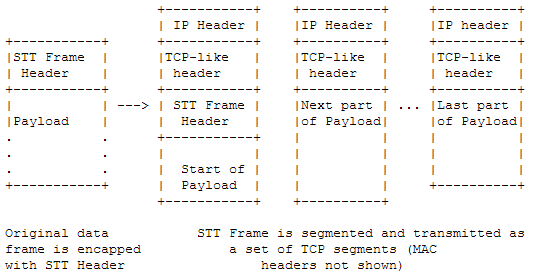 We know that user-kernel switching and NIC interrupts consume CPU time, and that the performance of network programs (e.g., firewalls, intrusion detection systems) is often measured in pps (packet per second) rather than bps (bit per second). Then when transmitting large amounts of data, the load on the system can be reduced if the packets can be larger.

The biggest problem with STT is that it is not easy to implement a policy for a particular client (tenant ID) on a network device. As shown above, for a large packet, only the first packet has an STT Frame Header in the header, while subsequent packets have no information that identifies the customer. This is not possible if I want to restrict a customer’s traffic from the Hong Kong data center to the Chicago data center to no more than 1Gbps. With other network virtualization protocols, this policy can be configured on the border router since each packet contains information that identifies the customer (of course the border router needs to be aware of this protocol).