This technique is used for IO operations, which consume a lot of CPU performance. Why IO operations can easily become a performance bottleneck? Every IO operation involves a conversion between the kernel space and user space of the operating system, and the real IO operations are actually performed in the kernel space of the operating system. Whether it is file IO, or network IO, in the end it can be unified as an exchange of user-space and kernel-space data. Memory and CPU are very scarce resources in a computer, and they should be used as efficiently as possible. IO operations often require interaction with the disk, so IO operations are several orders of magnitude slower than CPUs. By taking advantage of the speed difference between the two, it is possible to implement different kinds of IO methods, which are commonly known as IO models.

To clarify, although some IO models claim to be non-blocking, they are non-blocking while waiting for data to be ready, but they are still blocking when receiving data. AIO is one of these IO models that is truly non-blocking. AIO returns directly after being called, and even the data reception phase is non-blocking, and the kernel will return a notification only when the data reception is complete. In other words, when the user process receives the notification, the data has already been received. There are implementations of AIO in Linux, but not many of them are actually used, and most of them use standalone asynchronous IO libraries such as libevent, libev, libuv.

What is the general file operation?

Scenario: copying a file to another file.

We can write the above code normally, but what actions does this code perform on the OS? It is impossible to find out the optimization points without knowing the principle, so we need to explore the mechanism of copy implementation.

The write operation is similar, only the steps are reversed, as you can see in this diagram below. 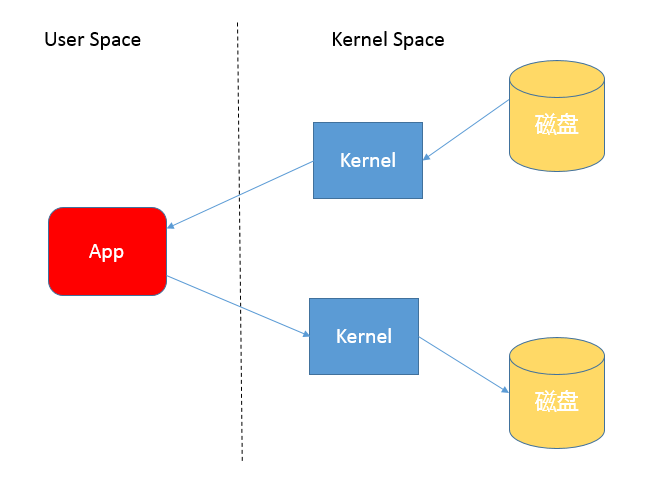 Therefore, this approach introduces some additional overhead and may reduce IO efficiency.

The NIO transferTo-based implementation, on Linux and Unix, uses a zero-copy technique where the user state is not involved in the data transfer, eliminating the overhead of context switching and unnecessary memory copies, which in turn may improve application copy performance. Note that transferTo can be used not only for file copying, but also for similar purposes, such as reading a disk file and then sending it over the socket, to enjoy the performance and scalability gains of this mechanism.

The transferTo transfer process is. 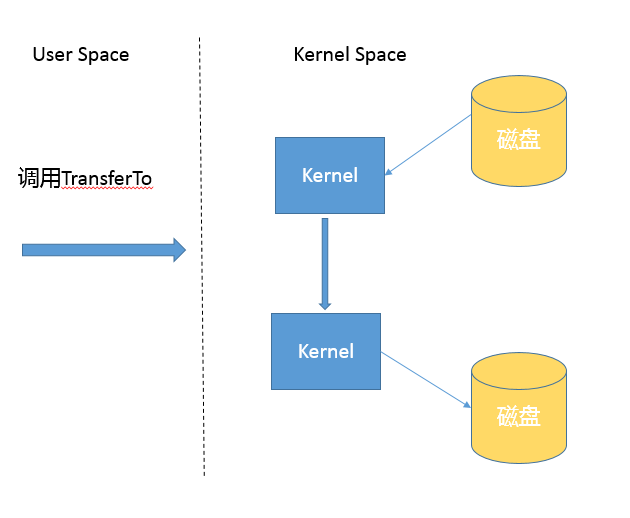 Upon closer inspection of the previous flow, the second and third copies are actually unnecessary (that is, returning data in kernel space to user space and writing user space data to kernel space)

The flow changes to

This can be interpreted as a data transfer between kernel state space and disk without going through user state space again, requiring only 2 switches and 2 copies.