Redis provides two separate persistence mechanisms, RDB and AOF. This chapter first describes how the AOF feature works, how commands are stored in AOF files, and how different AOF storage modes affect data security and Redis performance. After that, we will introduce the method of restoring the database state from the AOF file and the implementation mechanism behind the method. Some pseudo-code will also be used to facilitate understanding. This article is based on the redis design and implementation book. The knowledge about redis persistence is more important, so I read the book directly to avoid detours, and record it in this article.

AOF persistence is used to record database state by saving the write commands executed by the redis server.

The implementation of the AOF persistence function can be divided into three steps (sync): append, write, and synchronize.

When AOF persistence is on, the server appends the executed write command to the end of the aof_buf buffer of the server state in protocol format after executing a write command.

The server process in Redis is an event loop, where file events are responsible for receiving command requests from clients and sending command replies to clients, and time events are responsible for executing functions like the serverCron function that need to be run at regular intervals. Because the server may execute commands while processing file events, causing some content to be appended to the aof_buf buffer, before the server ends an event loop, it calls the flushAppendOnlyFile function to consider whether the contents of the aof_buf buffer need to be written and saved to the AOF file The following is the pseudo-code.

The behavior of the flushAppendOnlyFile function is determined by the value of the appendfsync option configured by the server, and the different values produce the following behavior.

To improve the efficiency of writing to files, in modern operating systems, when the user calls the write function to write some data to a file, the operating system usually stores the written data in a memory buffer temporarily and waits until the buffer is full or the specified time limit has passed before actually writing the data in the buffer to disk. This approach improves efficiency, but also creates a security problem for writing data, because if the computer is down, the write data stored in the memory buffer will be lost. For this reason, two synchronization functions, fsync and fdatasynce, are provided to force the operating system to write the data in the buffer to the hard disk immediately, thus ensuring the security of the written data.

The value of the server configuration appendfsync option directly determines the efficiency and security of the AOF persistence feature.

When the above steps are completed, the database state stored in the AOF file is restored in its entirety.

Because AOF persistence records database state by storing executed write commands, as server runtime passes, the contents of the AOF file will become larger and larger, and if left unchecked, an oversized AOF file is likely to have an impact on the Redi server or even the entire host computer. The larger the AOF file, the more time it takes to perform a data restore using the AOF file.

Then the AOF file would need to store six commands just to record the state of the list key. For real-world applications, the number and frequency of write commands will be much higher than the simple example above, and will cause much more serious problems. To solve the problem of AOF file size expansion, Redis provides the AOF file rewrite feature. With this feature, the Redis server can create a new AOF file to replace the existing AOF file. The old and new AOF files hold the same repository state, but the new AOF file does not contain any redundant commands that waste space, so the size of the new AOF file is usually much smaller than the old AOF file.

Although Redis names the ability to generate new AOF files to replace AOF files with AOF file rewrites, in reality, AOF file rewrites do not require any reading, parsing, or writing of existing AOF files; they are implemented by reading the current database state of the server.

Consider a situation where the server executes the following command on the list key.

Then the server must write six commands in the AOF file in order to keep the current state of the list keys. If the server wants to use as few commands as possible to record the state of the list key, then the easiest and most efficient way is not to read and analyze the contents of the existing AOF file, but to read the value of the key list directly from the database and then replace the six commands saved in the AOF file with a single RPUSH list “C” “D” “E” “E” “G” command, thus reducing the This reduces the number of commands needed to save the list key from six to one.

The pseudo-code of the whole process can be represented as follows.

Because the new AOF file generated by the aof_rewrite function contains only the commands necessary to restore the current database state, the new AOF file does not waste any hard disk space.

The AOF rewriter aof_rewrite function described above does a good job of building a new AOF file, but because this function does a lot of writing, the thread calling it will be blocked for a long time. Because the Redis server uses a single thread to handle command requests, if the aof_rewrite function were called directly by the server, the server would not be able to handle command requests from the client during the rewrite of the AOF file.

Obviously, as an auxiliary maintenance tool, Redis does not want AOF rewrites to prevent the server from processing requests, so Redis decided to put the AOF rewrites into a subprocess, which accomplishes two things at once.

However, there is a problem that needs to be solved by using child processes, because the server process needs to continue processing command requests during the AOF rewrite, and the new commands may modify the existing database state, thus making the current database state of the server and the database state saved in the rewritten AOF file inconsistent. 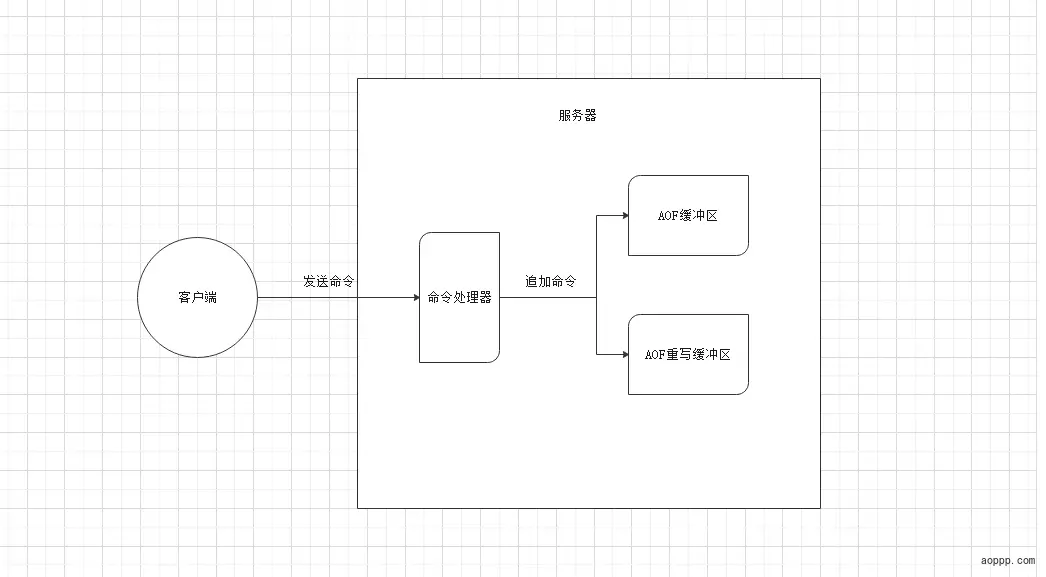 The complete rewriting process is as follows.

The above is the principle of the AOF background rewrite, that is, the implementation of the BGREWRITEAOF command.