What are the flaws in the TCP protocol that we are talking about today? There are four main areas.

Next, these four areas are addressed in detail.

The TCP protocol was created in 1973 and is still being implemented today with many new features.

However, the TCP protocol is implemented in the kernel and can only be used and not modified by applications.

The trouble is not that upgrading the kernel is troublesome, but because kernel upgrades involve updating the underlying software and libraries, our service programs need to return to test whether they are compatible with the new kernel version, so kernel upgrades for servers are conservative and slow.

Many new features of the TCP protocol require both client and server support to take effect. For example, the TCP Fast Open feature was proposed in 2013, but some old systems cannot support this feature because many PC-side systems have a serious upgrade lag.

Therefore, even if TCP has a better feature update, it is difficult to promote it quickly, and users often need several years or ten years to experience it.

Application protocols implemented based on TCP require three handshakes to be established before data can be transferred, such as HTTP 1.0/1.1, HTTP/2, and HTTPS.

TCP three handshake and TLS handshake latency, as shown in the figure. 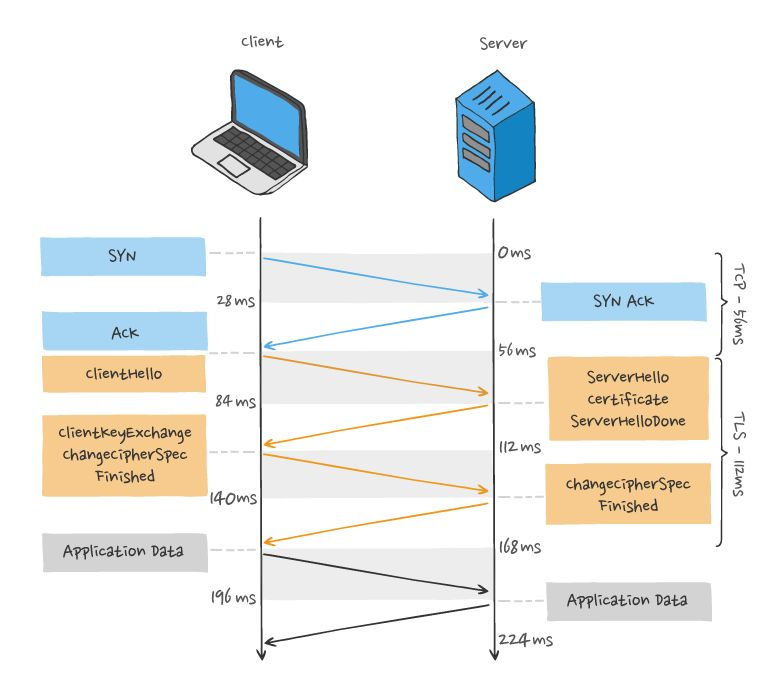 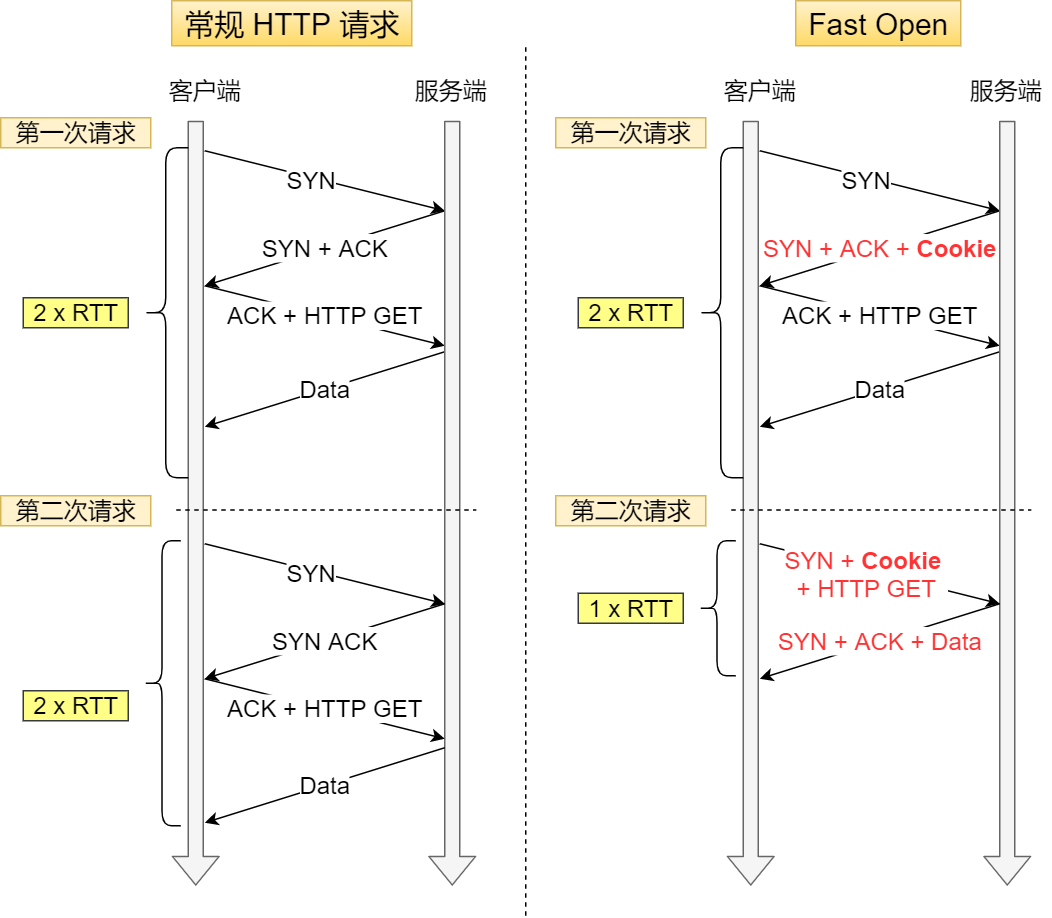 The process is as follows.

It is also true that TCP is implemented in the kernel, so TLS cannot encrypt TCP headers, which means that TCP sequence numbers are transmitted in clear text, so there is a security problem.

A typical example is when an attacker forges an RST message to force a TCP connection to close, and the key to a successful attack is that the sequence number in the TCP field is within the sliding window of the receiver and the message is legitimate.

For this reason TCP also has to perform three handshakes to synchronize the respective sequence numbers, and the sequence numbers are initialized in a random way (not completely random, but linearly increasing with the passage of time, and then rolled back at the end of 2^32) to make it more difficult for the attacker to guess the sequence numbers to increase security. 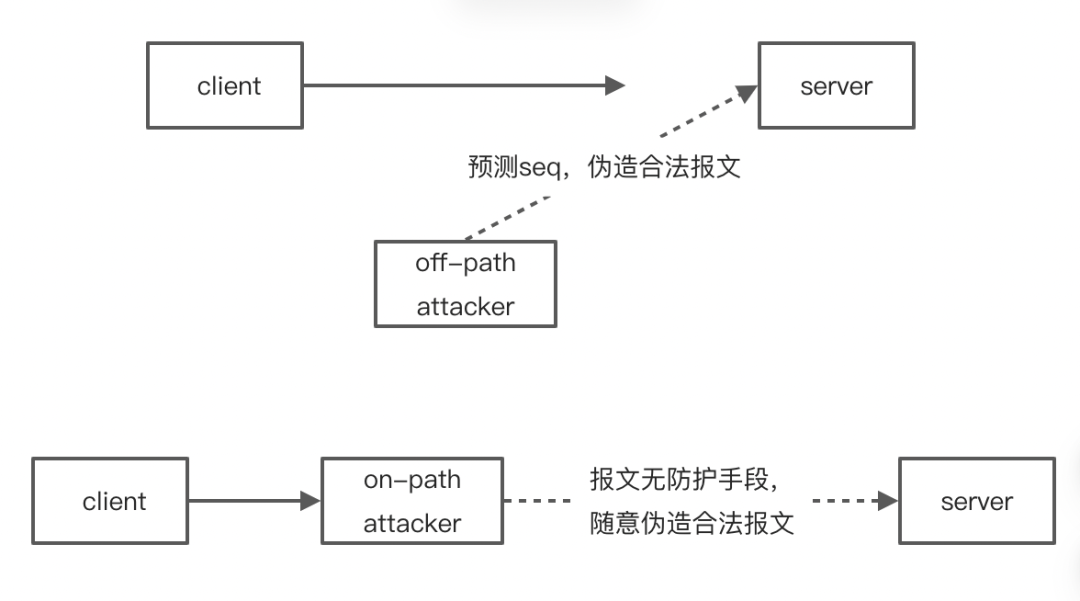 If TCP sequence numbers could be encrypted, there might not really be a need for three handshakes. The initial sequence numbers of both the client and the server start from 0, so there is no need to do the work of synchronizing sequence numbers, but to implement this, the whole protocol stack has to be modified, which is too much trouble, and even if it is implemented, many old network devices may not be compatible.

TCP is a byte stream protocol, TCP layer must ensure that the received byte data is complete and ordered , if the TCP segment with lower sequence number is lost in network transmission, the application layer cannot read this part of data from the kernel even if the TCP segment with higher sequence number has been received. As shown in the following figure. 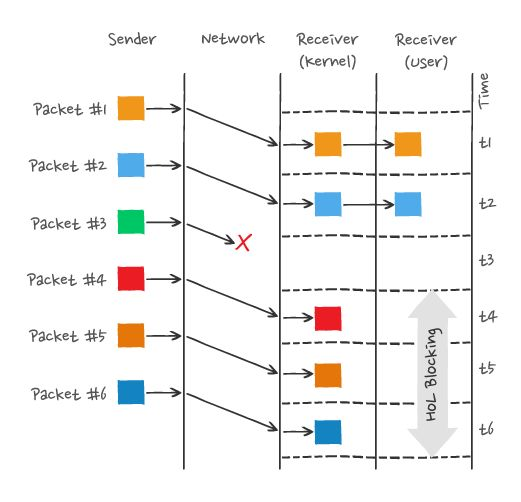 This is the TCP queue head blocking problem, but you can’t blame TCP for this because it’s the only way to keep the data in order.

HTTP/2 multiple requests are running in one TCP connection, so when TCP loses packets, the whole TCP has to wait for retransmission, then it blocks all requests in that TCP connection, so the HTTP/2 queue head blocking problem is caused by the TCP protocol.

Then when the mobile device’s network switches from 4G to WIFI, which means the IP address changes, then it has to disconnect and re-establish the TCP connection.