K3s is a lightweight Kubernetes distribution that is highly optimized for edge computing, IoT, and other scenarios.

K3s has the following enhancements.

It’s called K3s because you want the installed K8S to be half the size in terms of memory footprint, and half the size is a 5 letter word, abbreviated as K3s.

At the same time, the Rancher team in China has launched an efficiency tool for K3s: AutoK3s . You can quickly create a K3s cluster and add a specified number of master nodes and worker nodes with a single command.

The principle is to encapsulate the components of K8S into the K3s binary, and then start the binary to start a full-fledged K8S cluster. We can see that the architecture of K3s and K8S is basically the same, where k3s-server corresponds to the control-plane and k3s-agent corresponds to the node node.

You can see that the default storage used in k3s is SQLite (self-contained) and the default network is Flannel (self-contained). When both the server and the client are started, they communicate through the Tunnel-Proxy component, which manages the network traffic through this channel. In the agent node, the corresponding Pod is created through the kubelet operation contaninerd. 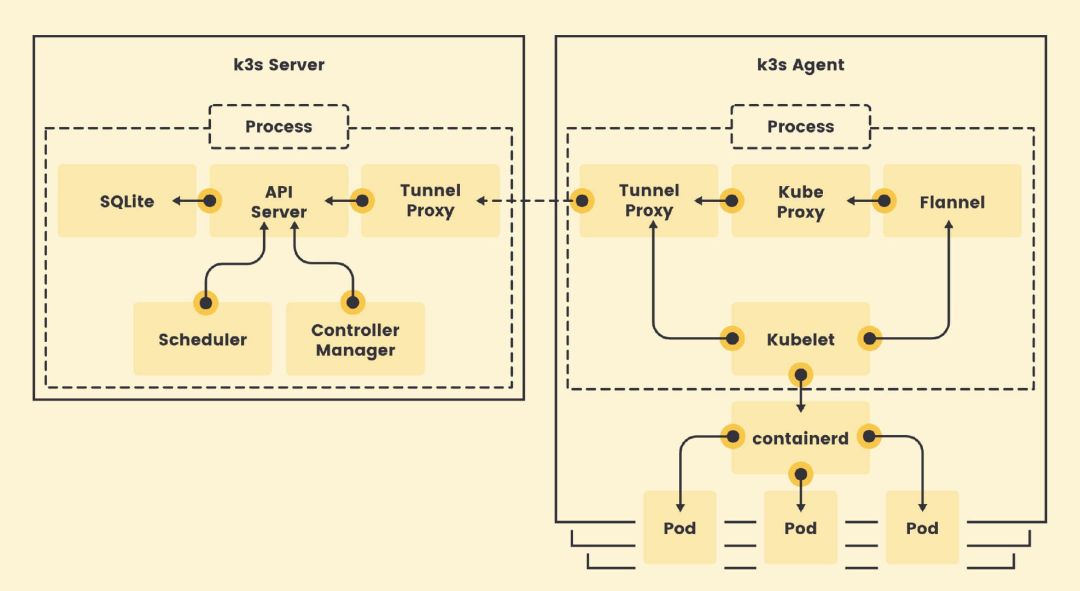 Although it is possible to run server-side and working nodes by downloading the binaries ( . /k3s server ), but once we exit the process, the previously created nodes are also immediately destroyed, so it is still recommended to use a script for installation.

K3s provides an installation script that can be easily installed as a service on systems with systemd or openrc. After running this installation, the K3s service will be configured to restart automatically after a node reboot or if a process crashes or is killed.

This allows me to modify the default backend network configuration options for Flannel (reboots will override this) when I install K3s or modify the corresponding configuration file afterwards. Here we show how to change it to host-gw mode.

Flannel’s own feature: Enable direct routes (e.g. host-gw) when hosts are on the same subnet. vxlan is only used to encapsulate packets to hosts on different subnets, host-gw is used between hosts on the same subnet and the default value is false.

Run K3s with --flannel-backend=none (disabled) and then install the CNI of your choice. Follow the Calico CNI Plugin Guide to modify the YAML configuration file for Calico to allow IP forwarding in the container_settings section.

While a single node k3s server cluster can satisfy various use cases, for critical environments that need stable operation to run K3s in an HA configuration, how can I install a highly available K3s cluster using an external database?

To run K3s in this mode, you must have an odd number of server nodes, it is recommended to start with three nodes. In embedded, the default is to use Etcd as the highly available database.

The ability to run K8S with a datastore other than etcd distinguishes K3s from other K8S distributions. This feature provides flexibility for K8S operators, and the available datastore options allow you to select a datastore that best fits the use case.

If your team does not have the expertise to operate etcd, you can choose an enterprise SQL database such as MySQL or PostgreSQL. If you need to run a simple, short-lived cluster in a CI/CD environment, you can use an embedded SQLite database.

If you want to use an external datastore such as PostgreSQL, MySQL or etcd, you must set the datastore-endpoint parameter so that K3s knows how to connect to it, and you can also specify parameters to configure authentication and encryption for the connection. The following table summarizes these parameters, which can be passed as CLI flags or environment variables.

As a best practice, we recommend setting these parameters as environment variables rather than command line parameters, so that your database credentials or other sensitive information is not exposed as part of the process information.

K3s uses containerd as the container runtime by default, so configuring the image repository on docker does not take effect. The K3s image repository configuration file consists of two main parts: mirrors and configs.

Note that server nodes are schedulable by default. If you do not have taint on the server nodes, then the workload will be run on them, make sure to create registries.yaml files on each server node.

containerd uses a concept similar to svc and endpoint in K8S. svc can be understood as the access name, which resolves to the corresponding endpoint. It can also be understood that the mirror configuration is a reverse proxy that proxies client requests to the endpoint configuration’s back-end mirror repository. The mirror name is optional, but it must match the IP or domain name definition rules. And you can configure multiple endpoints, which resolve to the first endpoint by default, and if the first endpoint does not return data, it automatically switches to the second endpoint, and so on.

Here we describe how to use the TLS configuration.

K3s will generate config.toml for containerd in /var/lib/rancher/k3s/agent/etc/containerd/config.toml. For advanced settings of this file, you can create another file named config.toml.tmpl in the same directory and this file will replace the default settings.

The offline installation process is divided into the following two main steps.

Three dashboard tools are recommended, corresponding to Kubernetes Dashboard, kube-explorer and Rancher UI, each with its own advantages and disadvantages.

For the components we want to use, we can disable the default components at startup and deploy the components you need manually (usually under a specified directory that is automatically pulled up as the service starts) for flexibility.

Running the registration command at the agent node will initiate a websocket connection with the server node, which will then create a random password on top of the worker node. Then it will take this password and the hostname of the worker node and send it to the master node. The master node then saves this information ( k8s secrets) and any subsequent attempts must use the same password.

After the cluster starts, a local-path component is started by default to provide service mount storage in the form of PVC by default. Afterwards, it is stored under the /var/lib/rancher/k3s/server/storageclass directory.

When upgrading K3s, the K3s service will restart or stop, but the K3s containers will continue to run. To stop all K3s containers and reset their state, you can use the k3s-killall.sh script. The killall script cleans up the containers, the K3s directory, and the network components, and also removes the iptables chain and all associated rules. Cluster data is not deleted.

You can upgrade K3s by using the install script, or manually install the binaries for the desired version.

You can upgrade K3s by using the install script, or manually install the binaries for the desired version.

You can use Rancher’s system-upgrade-controller to manage K3s cluster upgrades. This is a Kubernetes native approach to cluster upgrades. It uses custom resource definitions ( CRD), schedules, and controllers to schedule upgrades based on configured schedules.

The controller schedules upgrades by monitoring the plan and selecting the nodes on which to run upgrade jobs, and the plan defines which nodes should be upgraded via a tag selector. When a job completes successfully, the controller tags the node it is running on accordingly.

When using an external data store, backup and restore operations are handled outside of K3s. The database administrator needs to perform backups of the external database or restore from snapshots or dumps. We recommend that the database be configured to perform periodic snapshots.

Use external data storage for backup and recovery

When K3s restores from a backup, the old data directory will be moved to /var/lib/rancher/k3s/server/db/etcd-old/ . Then K3s will try to restore the snapshot by creating a new data directory, and then start etcd from a new K3s cluster with one etcd member.

K3s comes with Rancher’s Local Path Provisioner (LPP), which enables the creation of pvc out-of-the-box using local storage on the respective node. Depending on the user configuration, LPP will automatically create hostPath-based persistent volumes on the node. It takes advantage of the features introduced by the Local Persistent Volume feature of K8s, but it is a simpler solution than the local pv feature built into K8s.

CoreDNS is deployed when the agent node is started. To disable it, run the -disable coredns option on each server. If you do not install CoreDNS, you will need to install a clustered DNS provider yourself.

When starting the server, Traefik will be deployed by default and any changes to this file will be automatically deployed to Kubernetes in a similar way to kubectl apply, which will use ports 80 and 443 on the host.

K3s provides a load balancer called Klipper Load Balancer that can use the available host ports. It is allowed to create Service of type LoadBalancer, but does not include an implementation of LB. Some LB services require a cloud provider, such as Amazon EC2. In contrast, K3s service LB makes it possible to use LB services without a cloud provider.

Helm is a package management tool for Kubernetes. Helm Chart provides a templated syntax for Kubernetes YAML manifest files, and the corresponding chart can be installed via Helm. K3s does not require any special configuration to use the Helm command line tool.

Any Kubernetes manifests found in /var/lib/rancher/k3s/server/manifests will be automatically deployed to K3s in a manner similar to kubectl apply. manifests deployed in this way are managed as AddOn custom resources. You will find AddOns for packaged components such as CoreDNS, Local-Storage, etc. The AddOns are automatically created by the deployment controller and named according to their filenames in the manifests directory.

The HelmChart CRD captures most of the options that you would normally pass to the helm command line tool. Here is an example of how to deploy Grafana from the default Chart repository, overriding some of the default Chart values. Note that the HelmChart resource itself is in the kube-system namespace, but the Chart resource will be deployed to the monitoring namespace.

It is recommended to run the following command to disable the firewalld firewall.