Libvirt is a set of open source software tools developed by Redhat. The goal is to provide a common and stable software library to manage virtual machines on a node efficiently and securely, and to support remote operations. Libvirt shields different virtualization implementations and provides a unified management interface. Users only care about the high-level functions, and the implementation details of VMM should be transparent to end users. libvirt then acts as a bridge between VMM and high-level functions, receiving user requests and then calling the interface provided by VMM to do the final work.

Why do I need Libvirt?

What does Libvirt provide? 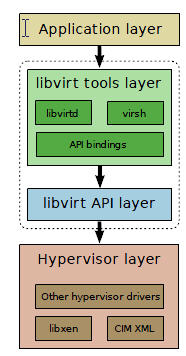 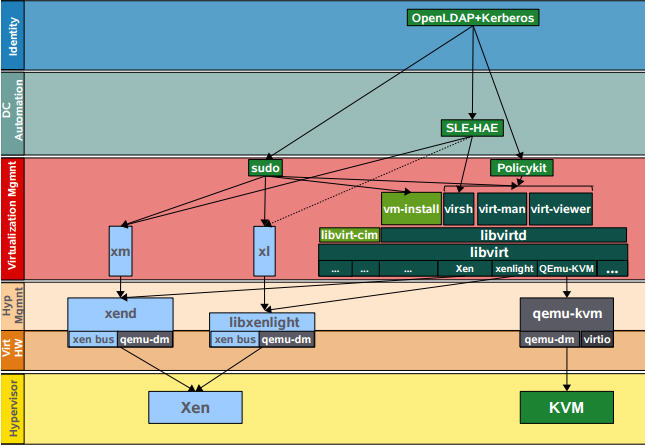 Any disk device, including floppy, hard disk, cdrom, or semi-virtualized drives are defined using the elements.

There are several interface types.

The libvirt API is implemented in the individual Hypervisor drivers and Storage dirver.

The Hypervisor drivers include.

kvm is a module of the linux kernel that requires hardware-assisted virtualization technologies, such as Intel-VT for cpu, AMD-V; memory-related technologies such as Intel’s EPT and AMD’s RVI. guest OS CPU instructions do not have to be translated by Qemu and run directly, greatly increasing speed. kvm exposes the interface through /dev/kvm. User programs can access this interface via the ioctl function. See the following pseudo-code.

The kvm kernel module itself can only provide virtualization of cpu and memory, so it must be paired with QEMU to form a complete virtualization technology, which is the following qemu-kvm.

Qemu is an emulator that simulates hardware to the Guest OS, which thinks it is dealing directly with the hardware, but is actually dealing with the hardware simulated by Qemu, which translates these instructions to the real hardware. Since all the hardware has to pass through Qemu, the performance is poor.

Qemu integrates kvm, calls the /dev/kvm interface via ioctl, and leaves the cpu instructions to the kernel module. kvm is responsible for cpu virtualization + memory virtualization, but kvm cannot emulate other devices. qemu emulates IO devices (NICs, disks, etc.), and kvm with Qemu makes it possible to virtualize servers in the true sense. It is called qemu-kvm because it uses both of these things.

Qemu emulates I/O devices, which also affects the performance of these devices, so semi-virtualized devices virtio_blk and virtio_net are created to improve device performance. 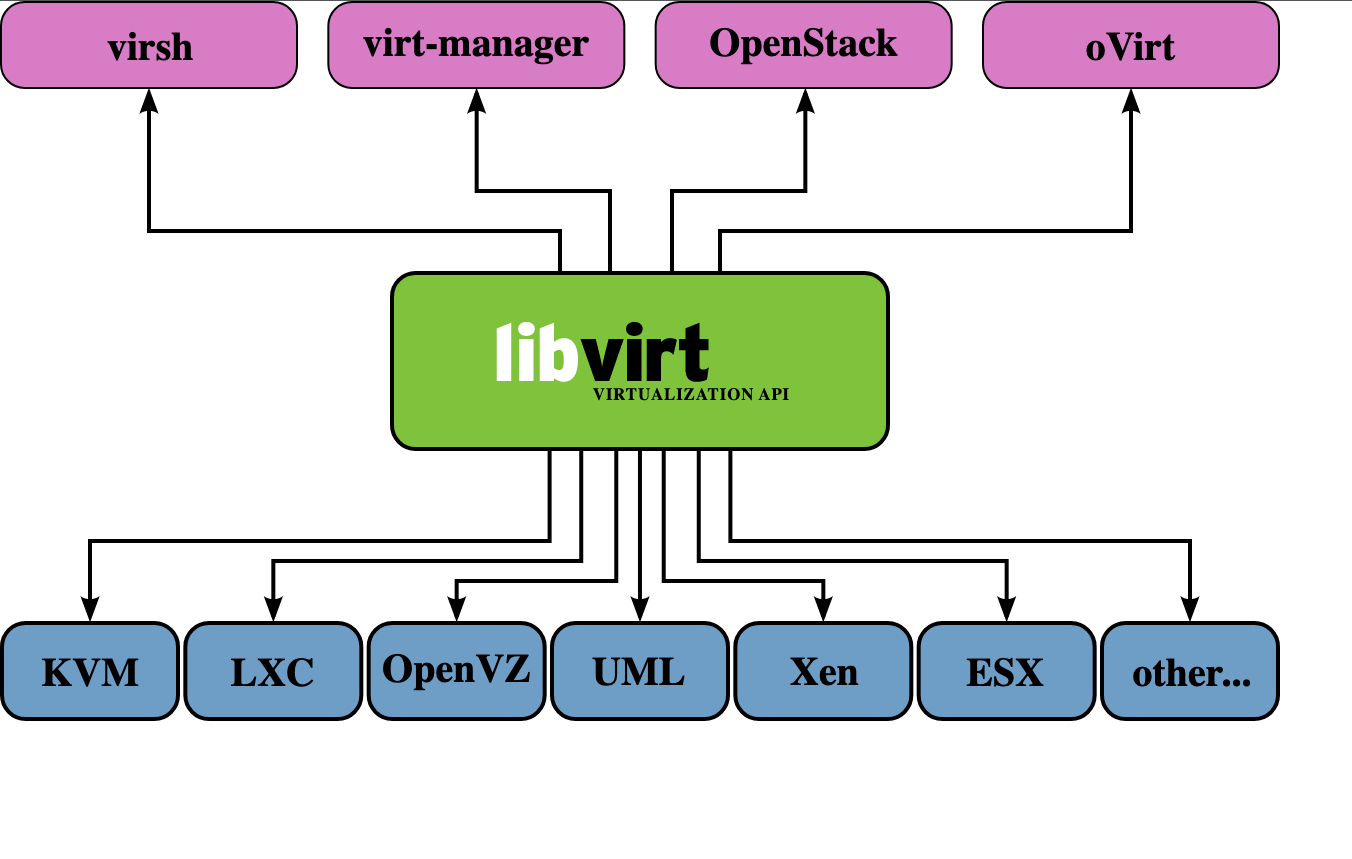 The main objects defined in the Libvirt code are shown below. 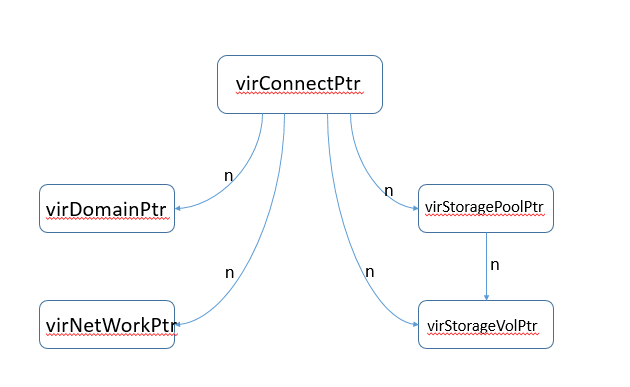 During the initialization process, all drivers are enumerated and registered. Each Driver loads specific functions to be called by the Libvirt API. As shown in the figure below, the Application calls the Public API through a URI, and then the Public API is implemented by calling the real Driver using the API interface provided by the Driver.

Libvirt aims to support remote management, so access to Libvirt’s drivers is handled by the Libvirt daemon libvirtd, which is deployed on the node running the virtual machine and managed by the remote Driver on the opposite end via RPC, as shown in the following diagram. 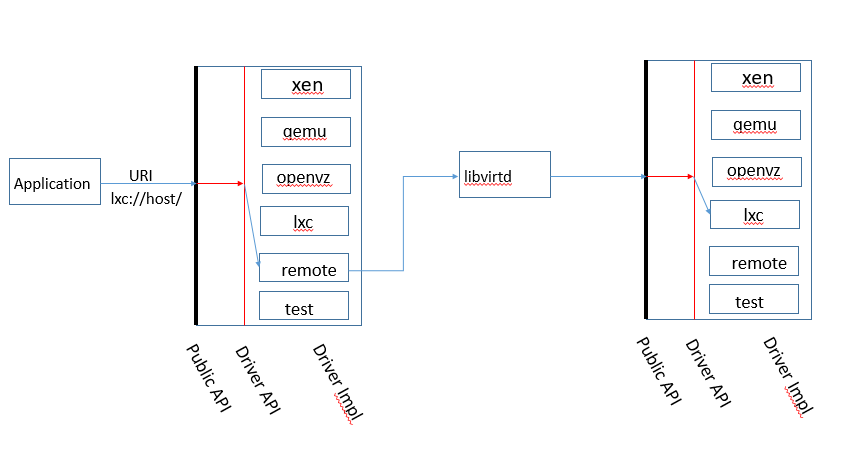 In remote management mode, virConnectionPtr actually connects the local remote Driver to the remote specific Driver. all calls reach libvirtd on the cloud first via the remote Driver, and libvirtd accesses the corresponding Driver.

here has a cross-reference to the virsh command, the Libvirt C API, the QEMU driver method and the QEMU Monitor command (in part).

KVM is an open source, Linux-native, fully virtualized solution for X86 hardware based on virtualization extensions (Intel VT or AMD-V). in KVM, virtual machines are implemented as regular Linux processes that are scheduled by standard Linux schedulers; each virtual CPU of a virtual machine is implemented as a regular Linux process. This allows the KMV to use the existing functionality of the Linux kernel. However, KVM itself does not perform any hardware emulation and requires a client space application to set up a client virtual server’s address space via the /dev/kvm interface, provide it with emulated I/O, and map its video display back to the host’s display. This application is currently QEMU.

Before installation, set the environment language to English LANG=“en_US.UTF-8”, if it is Chinese, some versions may report an error.

First learn the virt-install command, use -help to view it here, and learn only the important ones, the others can be learned later.

The above create virtual machine command eventually needs to configure the system base settings with [!] are basically to be configured, after the configuration is complete, you can enter the virtual machine installation process.

In order to hot add CPUs, you need to change the maximum number of CPUs, and the number of hot adds cannot exceed the maximum.

Current is 2, change to automatic bracketing, maximum is 4

Restart the virtual machine, check the CPU information, confirm the number of CPUs, and then hot add CPUs.

At this point, check the virtual machine CPU.

Go back to the virtual machine and check the CPU information.

The memory settings have a balloon mechanism, which can be increased or decreased, but also set a maximum value, which is not set by default, and can be specified during installation.

You can modify XML to change the virtual machine memory configuration.

The main changes are the virtual machine file name, UUID, image address and NIC address, where the UUID can be generated using the uuidgen command under Linux.

How to define a virtual machine based on XML