Note that gRPC uses the CompletionQueue binding for RPC calls in order to implement asynchronous calls, which can feel strange when writing the actual code. The response, because it is asynchronous, calls CompletionQueue::Next to wait for the packet return operation. Leave an impression here first, it will be clearer when talking about the process below.

To complete our demo, you can install gRPC directly using the following command if you don’t have it installed.

The examples presented below all use the official: https://github.com/grpc/grpc/blob/master/examples/cpp/helloworld/.

For a synchronous client, calling a remote method blocks the current thread, but asynchronous allows multiple requests to be sent at the same time without blocking.

So when we use gRPC’s asynchronous API, we need to do the following. 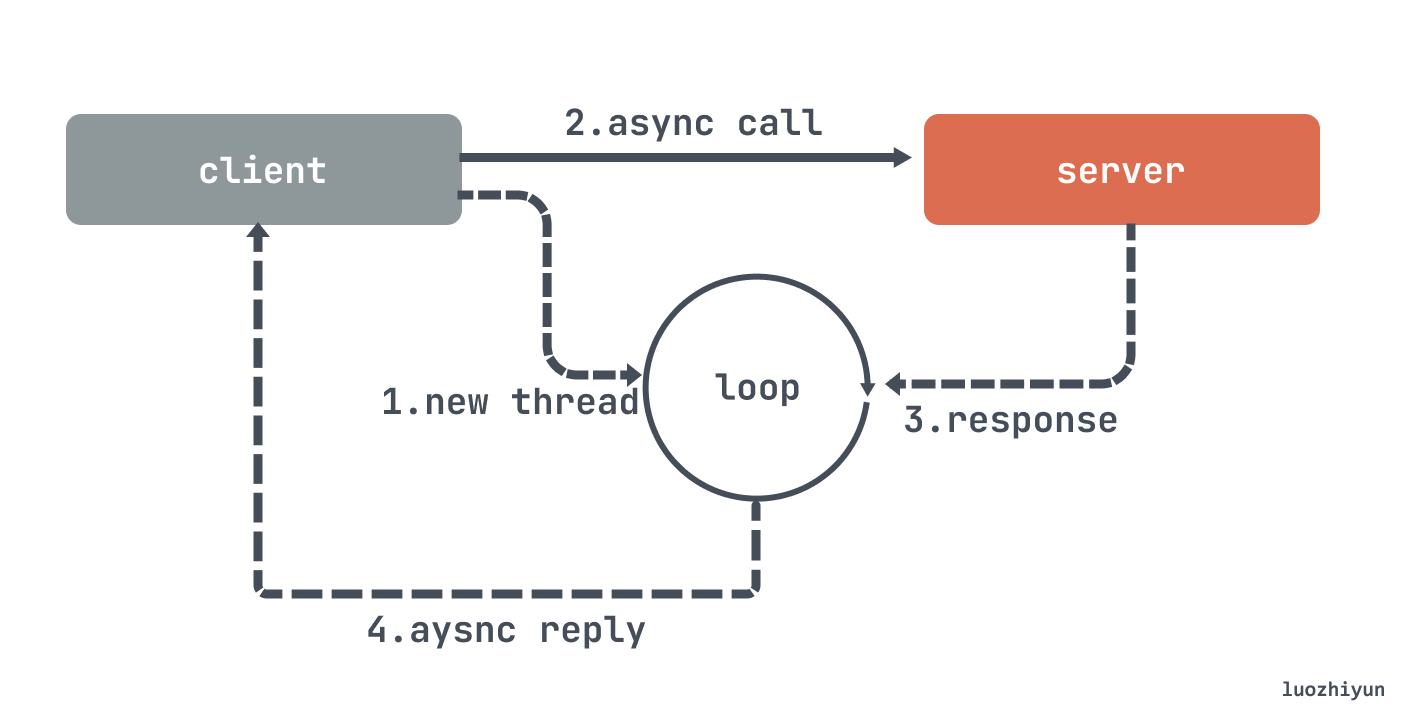 The overall process can be seen from the above diagram as follows.

Let’s look at the following example.

The first step is to create the client to, and then asynchronously thread the server’s packet return, as it will block while processing the packet return.

Here the request will be sent by calling SayHello.

The logic for asynchronous packet processing is called in a loop inside the thread we created at the beginning.

Here will keep calling the Next method to process the server’s response, if there is no packet return will keep blocking, so here we need to start a new thread to avoid blocking the main process.

Generally, when we write the Server side, if it is a synchronous operation, the request will be processed immediately after it is received, and then the packet will be returned to the client, and the process of returning the packet needs to wait until the whole RPC request is finished, so there is a blocking waiting process.

However, when understanding the gRPC asynchronous API, it can still feel very awkward to understand the example code at first.

First of all, gRPC makes you prepare a CallData object as a container like a pipeline operation, and then gRPC sends various events to the CallData object through ServerCompletionQueue and lets the object process them according to its own state.

Then after processing the current event, you need to manually create another CallData object, which is prepared for the next Client request, the whole process is like a pipeline.

The above asynchronous process has a little state machine in it, all reversed by the CallData object.

After it is clear what this CallData object is used to do, let’s look at the entire Server process as follows:

Take a look at the code below.

The main flow here will create CallData object and then continuously loop through the events from the cq object, which is a waiting queue and will keep blocking when there are no events coming. When there is an event, the tag will be taken from cq_ and converted into a CallData object to call the Proceed method.

From here we can relate to the HandleRpcs method above.

In fact, compared to go’s grpc asynchronous API, I have to say that cpp’s API design is very problematic, at first glance, I don’t know what new CallData is for, why it doesn’t do anything after new, and there is no delete operation, won’t memory overflow? And then into the constructor method to find the logic are in the constructor, such a way of writing code I have only seen here.

There are also a lot of people spit it out the design of this api: https://github.com/grpc/grpc/issues/7352 , the official also promised to modify, but a shake 6 years later also did not improve the meaning.