When all hosts in a cluster are on the same Layer 2, calico cni can make all Pod networks interoperate by just routing. However, a pure Layer 2 environment is not always possible in many scenarios, so when hosts interoperate with each other at only Layer 3, the calico IPIP (full name IP in IP) mode can be used.

IP in IP is an IP tunneling protocol whose core technology is that the sender encapsulates an IP packet into another IP packet and sends it to the receiver, who then parses out the internal IP packet from the outer IP packet for processing. It is commonly used in technologies such as VPN to bridge two intranet environments.

In the previous article, we briefly talked about how calico is able to pass through Pod networks on different hosts via routing. In fact, there is a prerequisite for this solution, which is that different hosts need to interoperate with each other at Layer 2. When the network environment can not meet, you can use the route + IPIP way to open the network.

Here is a simple experiment to verify the scheme.

The above script is used to create a virtual Pod that can be executed on a different host, remember to change the IP address to ensure that the two Pods have different IPs.

After that, create an IP tunnel on the host. This is also executed on both hosts.

The flowchart is as follows. 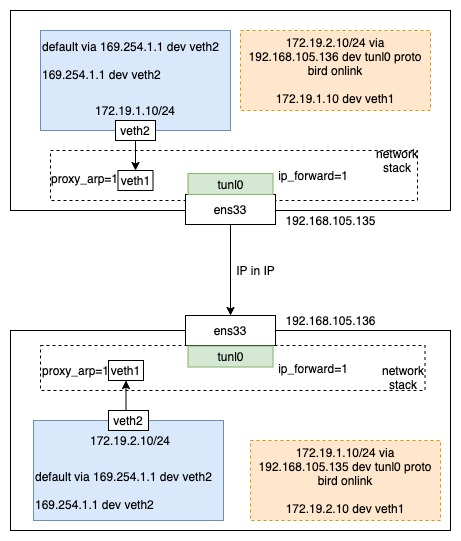