Kernel state user state switch: still in a thread, just from the user state into the kernel state for safety and other factors need more instructions, system calls specific more what to do see: https://github.com/torvalds/linux/blob/v5.2/arch/x86/entry/entry_64.S#L145

Soft interrupts: such as network packet arrival, triggering ksoftirqd (one per core) process to handle, is a kind of process switching

Process switching is the heaviest inside, less context switching, and the cost of process blocking wake-up call scheduling. In addition, process switching has the initiative to give up the CPU switch, there are also time slices are switched after running out

CPU hyperthreading switch: the lightest, occurs inside the CPU, OS, applications can not sense 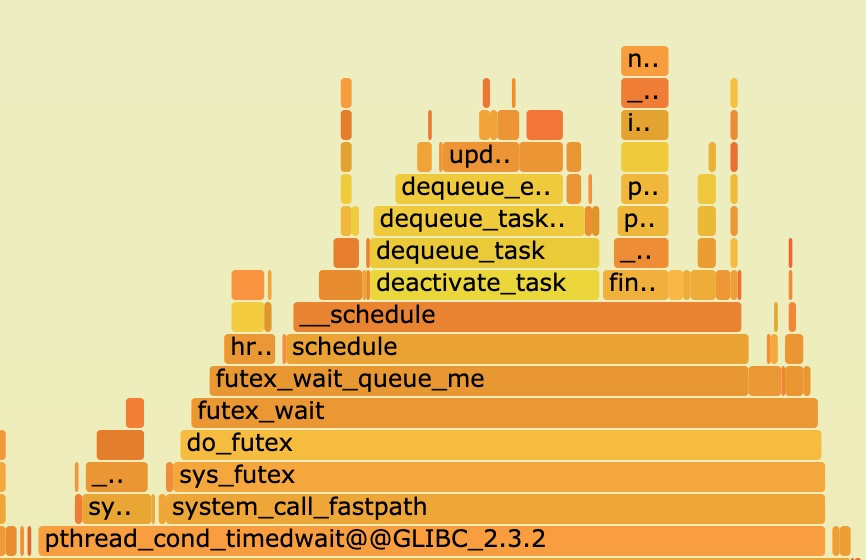 Context switching will also cause threads to lag longer because of scheduling.

Linux kernel process scheduling time slice is generally the inverse of HZ, HZ is generally set to 1000 when compiling, the inverse is 1ms, that is, the time slice of each process is 1ms (in the early years is 10ms - when HZ is 100), if process 1 blocks to let out the CPU into the scheduling queue, at this time there are two more in front of the scheduling queue Processes 2/3 are in the queue, which means that at worst it will be 2ms before 1 is scheduled for execution. The load determines the length of the queue, if the process whose turn to be scheduled is ready then there is no performance waste, on the other hand if the process whose turn to be scheduled is not ready (e.g. network packet not arrived) it is a waste of a scheduling.

sched_min_granularity_ns is the most prominent setting. In the original sched-design-CFS.txt this was described as the only “tunable” setting, “to tune the scheduler from ‘desktop’ (low latencies) to ‘server’ (good batching) workloads.”

In other words, we can change this setting to reduce overheads from context-switching, and therefore improve throughput at the cost of responsiveness (“latency”).

The CFS setting as mimicking the previous build-time setting, CONFIG_HZ. In the first version of the CFS code, the default value was 1 ms, equivalent to 1000 Hz for “desktop” usage. Other supported values of CONFIG_HZ were 250 Hz (the default), and 100 Hz for the “server” end. 100 Hz was also useful when running Linux on very slow CPUs, this was one of the reasons given when CONFIG_HZ was first added as an build setting on X86.

How long does it take to make a context switch??

Context switching can speed up between 66-45% if tied to a core.

How much overhead does a process/thread switch actually require?

Each context switch takes about 3.5us on average

The following calculation is rather brown, for reference only. The higher the pressure, the more network packets a soft interrupt needs to handle, the longer the time consumed. If the number of packets is too small then the test interference is too severe and the data is not accurate.

The tester sets the send/receive queue to 1, so that all soft interrupts are given to a single core to handle.

Interrupt is about 4000 when there is no pressure, then deliberately run pressure, CPU run to 80%, and check by vmstat and top.

top sees that si% is roughly 20%, which means that 25000 interrupts for a core consume 20% of the CPU, indicating that these soft interrupts consume 200 milliseconds.

Reducing the pressure on the CPU runs to 55% si consumes 12%.

lmbench’s lat_ctx, etc., in microseconds, the context of a process is 1540 nanoseconds when the pressure is low

After looking at these data and thinking about what coroutine is doing and why it is efficient, it is natural.