Systemd is a centralized system and setup manager for the Linux computer operating system, including daemons, libraries and applications, developed by Lennart Poettering. The goal was to provide a better framework to represent the dependencies between system services, to enable parallel startup of services during system initialization, and to reduce the system overhead of the shell, eventually replacing the System V and BSD style init programs that are now commonly used.

Most Linux distributions now use systemd instead of System V.

For those software that support Systemd, a configuration file is automatically added to the /usr/lib/systemd/system directory when it is installed.

If you want the software to boot, execute the following command (take sshd.service as an example).

The above command is equivalent to adding a symbolic link to the /etc/systemd/system directory, pointing to the sshd.service file in /usr/lib/systemd/system.

For software that does not natively support Systemd, you can write your own configuration file for the purpose of boot-up.

As you can see there are three sections in this file: [Unit] , [Service] and [Install] .

All startup settings can be preceded by a hyphen ( - ) to indicate “error suppression”, i.e. when an error occurs, it does not affect the execution of other commands. Take sshd.service for example, EnvironmentFile=-/etc/sysconfig/sshd (note the hyphen after the equal sign) in the file means that the /etc/sysconfig/sshd file does not exist and no error will be thrown.

The getty@.service file is used here as an example to analyze how it is possible to start multiple services using a single configuration file.

Run the systemctl status getty@tty1.service command and you will see the output as shown below.

To start it, just add the parameter that needs to be filled in the %I position after @, e.g. getty@tty9.service. 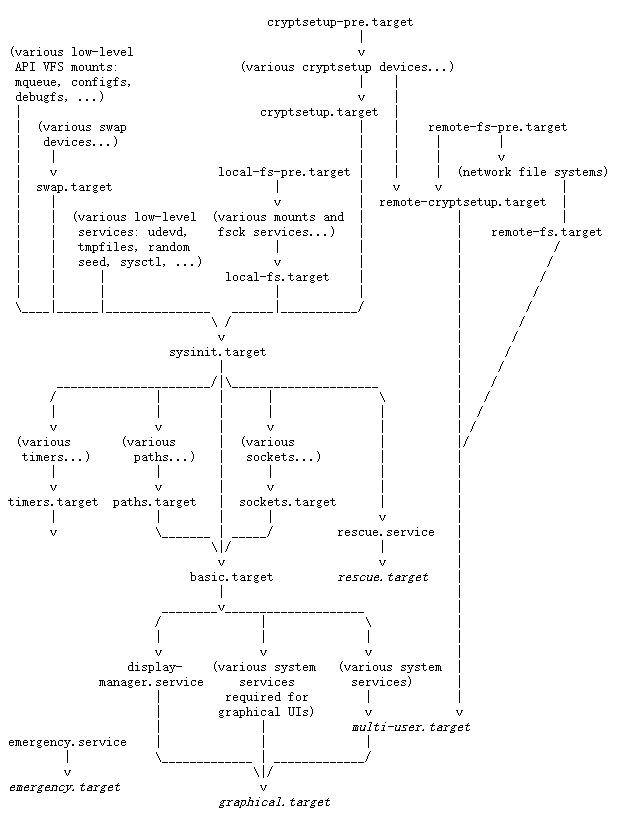