For example, suppose we want to get all the odd numbers in a shape-shifting array. Following imperative logic, we need to break down the process into step-by-step statements that

If we go by declarative programming, the idea might be to “filter out all odd numbers”, and the corresponding code would be very intuitive.

There is a clear distinction between the two types of programming mentioned above.

In layman’s terms, data-flow oriented and change propagation is reactive to the flow of events that occur in the future.

In this flow, a myriad of events make up the event stream, and subscribers are constantly receiving and responding to new events.

At this point, we have an initial understanding of the definition of reactive programming, i.e., responding to future occurrences of event streams in a declarative manner. In practice coding, many good three-party libraries further abstract this mechanism and provide developers with interfaces with varying functionality. In iOS development, there are three dominant “schools” of reactiveness.

These three schools are ReactiveX, Reactive Streams, and Reactive*. ReactiveX is described in more detail next, and Reactive Stream aims to define a standard for non-blocking asynchronous event stream processing, which Combine has chosen as the specification for its implementation. Reactive*, represented by ReactiveCocoa, was very popular in the Objective-C era, but with the rise of Swift, more developers chose RxSwift or Combine, causing Reactive* to decline in popularity overall.

ReactiveX was originally a reactive extension implemented by Microsoft on . Its interfaces are not intuitively named, such as Observable and Observer, and the strength of ReactiveX is the innovative incorporation of many functional programming concepts, making the entire event stream very flexible in its morphing. This easy-to-use and powerful concept was quickly adopted by developers of all languages, so ReactiveX is very popular in many languages with corresponding versions (e.g. RxJS, RxJava, RxSwift), and Resso’s Android team is using RxJava heavily.

Combine is an RxSwift-like asynchronous event processing framework coming from Apple in 2019.

Combine provides a set of declarative Swift APIs to handle values that change over time. These values can represent user interface events, network responses, scheduled events, or many other types of asynchronous data.

The Resso iOS team also briefly tried RxSwift, but after a closer look at Combine, we found that Combine outperformed RxSwift in terms of performance, ease of debugging, and the special advantages of a built-in framework and SwiftUI official configuration, and were attracted by its many advantages to switch to Combine.

Combine has a number of advantages over RxSwift.

Combine has more than 30% performance improvement over RxSwift for all operations.

Since Combine is a library, with the Show stack frames without debug symbols and between libraries option turned on in Xcode, the number of invalid stacks can be significantly reduced, improving Debug efficiency. 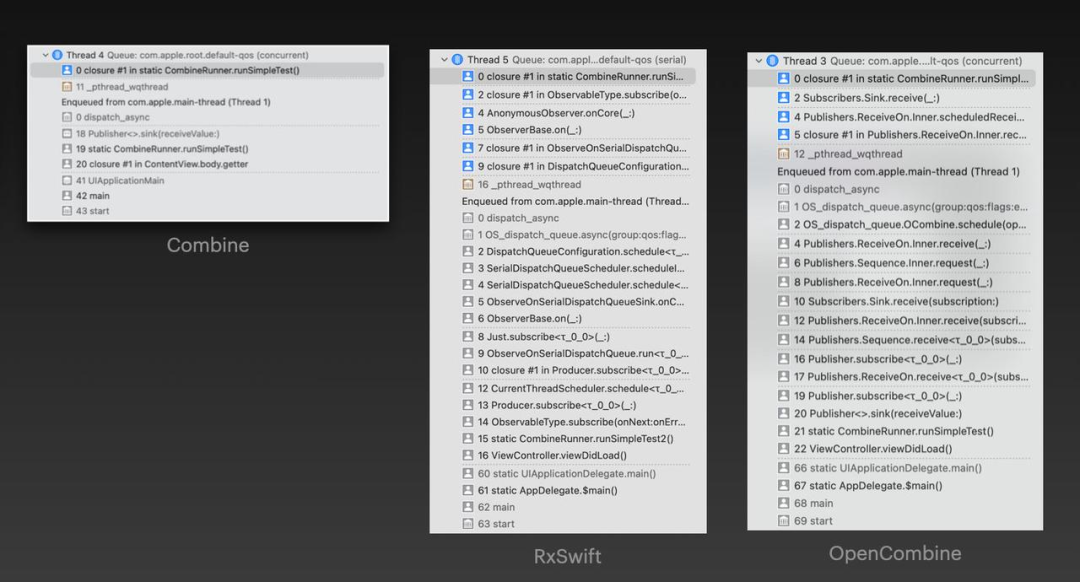 As mentioned above, Combine’s interface is based on the Reactive Streams Spec implementation, where concepts such as Publisher, Subscriber, and Subscription are already defined, with some fine-tuning by Apple.

Specifically at the interface level, the Combine API is more similar to the RxSwift API. The missing interfaces in Combine can be replaced by other existing interfaces, and a few operators are available in open source third-party implementations, so there is no impact on the production environment. 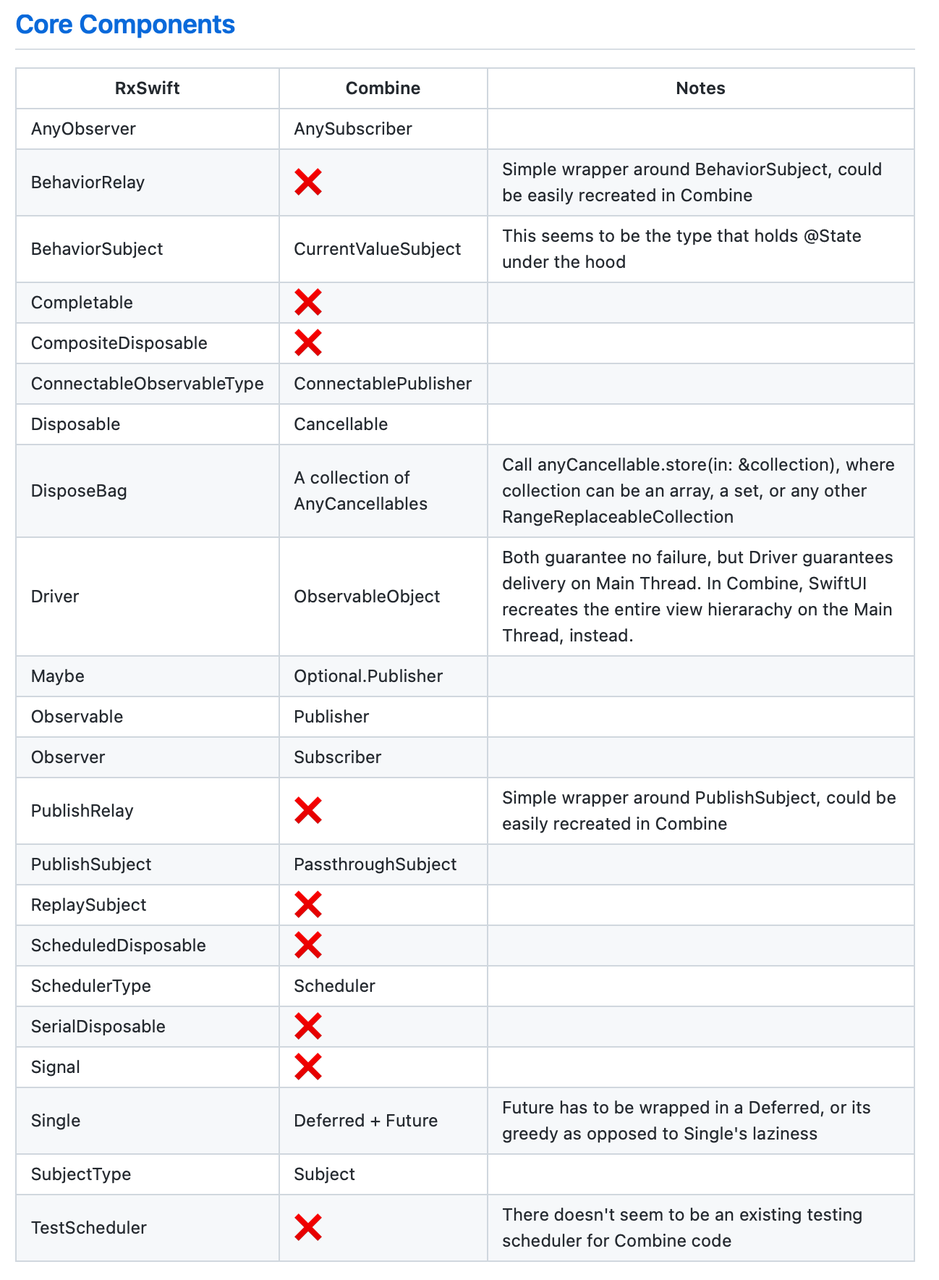 If you are a careful reader, you may have noticed the presence of OpenCombine in the Debug Advantage diagram, which is great, but has one fatal drawback: it requires a minimum system version of iOS 13, which is not available for many apps that require multiple system versions.

The OpenCombine community has been kind enough to implement an open source implementation of Combine that only requires iOS 9.0: OpenCombine, which has been tested internally to be on par with Combine in terms of performance. The cost of migrating from OpenCombine to Combine is also very low, with only a simple text replacement job. OpenCombine is also used by Resso, Cut Image, Waking Image, and Lark in our company.

As mentioned above, the concept of Combine is based on Reactive Streams. three key concepts in reactive programming, event publication/operation transformation/subscription usage, correspond to Publisher , Operator and Subscriber in Combine.

In the simplified model, there is first a Publisher that is transformed by an Operater and then consumed by a Subscriber. In actual coding, the source of Operator may be a plural Publisher, and Operator may be subscribed by multiple Publishers, usually forming a very complex graph.

Publisher is the source of Event generation. Events are a very important concept in Combine and can be divided into two categories, one carrying a value (Value) and the other marking the end (Completion). The end can be either a normal completion (Finished) or a failure (Failure).

Typically, a Publisher can generate N events before ending. Note that once a Publisher has issued a Completion (which can be either a normal completion or a failure), the entire subscription will end and no events can be issued after that.

Apple provides Combine extensions to the Publisher for many common classes in the official base library, such as Timer, NotificationCenter, Array, URLSession, KVO, and more. Using these extensions we can quickly combine a Publisher, such as

In addition, there are some special Publishers that are also very useful.

Sink is used to subscribe directly to the event stream, and can handle Value and completion separately.

The word Sink can be very confusing at first sight. The term can be derived from the sink in a network stream, which we can also understand as The stream goes down the sink.

Assign is a special version of Sink that supports direct assignment via KeyPath.

Note that assigning self with assign may result in an implicit circular reference, in which case you need to manually assign sink with weak self instead.

Note that for each subscription we need to hold this cancellable, otherwise the whole subscription will be cancelled and ended immediately.

The connection between Publisher and Subscriber is made via Subscription. Understanding the entire subscription process can be very helpful when using Combine in depth. 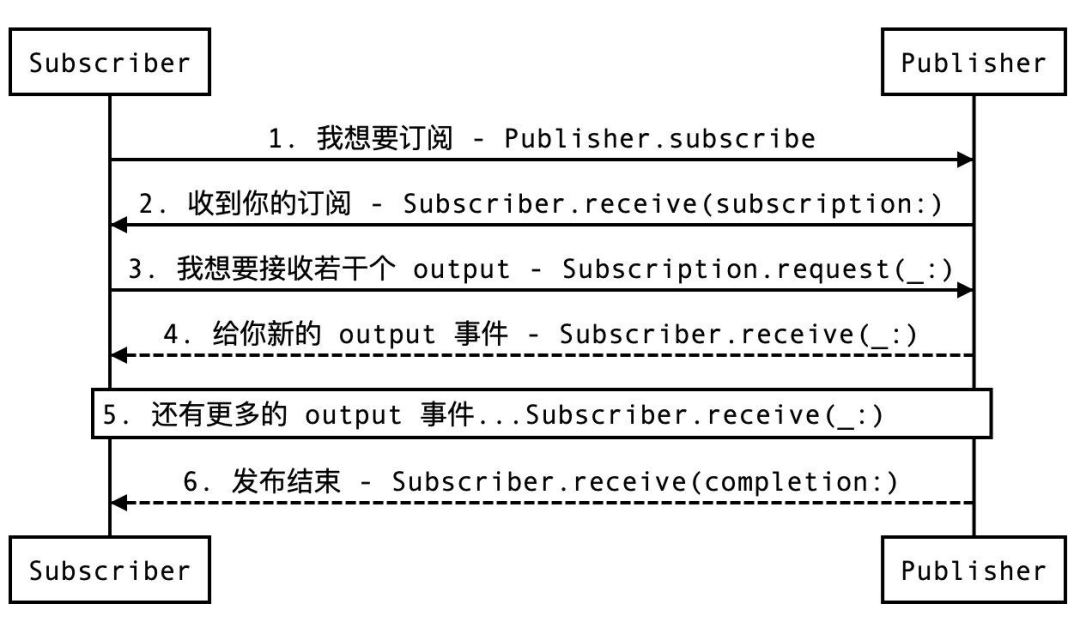 Subject is a special class of Publisher that can be used to manually inject new events into the event stream via method calls such as send().

For those who are new to Combine, there is no greater problem than finding an event source that you can use directly. Combine provides a Property Wrapper @Pubilshed to quickly wrap a variable to get a Publisher.

What is interesting above is that $countDown accesses a Publisher, which is actually syntactic sugar, $ accesses what is actually the projectedValue of countDown, which is the corresponding Publisher.

@Published is great for encapsulating events within a module, type-erasing them and then making them available externally for subscription consumption.

In practice, for existing code logic, @Published can be used to quickly give properties the ability to be Publisher without changing other code. For new code, @Published is also a good choice if no errors occur and the current Value needs to be used, but otherwise consider using PassthroughSubject or CurrentValueSubject on an as-needed basis.

Combine comes with a very rich set of Operators, and we will introduce some of them.

Students familiar with functional programming should be familiar with these Operators. Their effects are very similar to those on arrays, except this time in an asynchronous event stream.

For example, for map, he transforms the values in each event.

filter is similar, filtering each event with the conditions in the closure. reduce, on the other hand, will compute the value of each event and finally pass the result of the computation downstream.

flatMap is a special operator that converts each of the events into an event stream and merges them together. For example, when the user enters text in the search box, we can subscribe to the text changes and generate the corresponding search request Publisher for each text and aggregate all the Publisher’s events together for consumption. 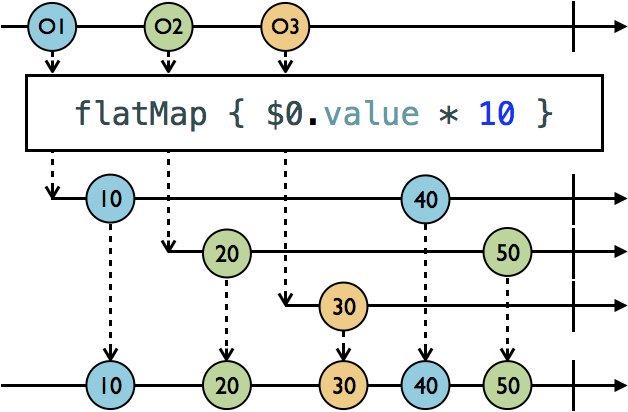 Other common Operators are zip , combineLatest and so on.

The Publisher in Combine gets a multi-layer generic nested type after various Operator transformations.

This does not pose any problem if the subscription is consumed as soon as the Publisher is created and deformed. However, once we need to make this Publisher available for external use, complex types can expose too many internal implementation details and also make the function/variable definition very bloated. Combine provides a special operator erasedToAnyPublisher that allows us to erase the specific type.

With type erasure, the final exposure to the outside world is a simple AnyPublisher<String, Error>.

reactive programming is very easy to write, but debugging is not as pleasant. In response, Combine also provides several Operators to help developers debug.

print prints out the entire subscription process from start to finish with all the changes and values, e.g.

When you get to the point where you’ve run out of ideas, it’s good to use images to clarify your thinking. For a single Operator, you can find the corresponding Operator in RxMarble to check if you understand it correctly. For complex subscriptions, you can draw a diagram to confirm that the event flow is being delivered as expected.

Just and Future that start immediately

For most Publishers, they start producing events only after subscription, but there are some exceptions. Just and Future execute closures to produce events immediately after initialization is complete, which may allow some time-consuming operations to start earlier than expected, and may allow the first subscription to miss some events that start too early.

A possible solution is to wrap a layer of Defferred outside such Publisher and let it start executing the internal closure after receiving the subscription.

An error occurred causing the Subscription to end unexpectedly

The above code converts a notification of user status into a network request and updates the result of the request to a Label. Note that if an error occurs in a network request, the entire subscription will be terminated and subsequent new notifications will not be converted into requests.

Resso uses Combine in many scenarios, the most classic example is the logic of getting multiple attributes in the sound effect function. The sound effect needs to use the album cover, the album theme color, and the song’s corresponding effects configuration to drive the sound effect playback. These three properties need to be fetched using three network requests, and if you use the classic iOS closure callbacks to write this part of the logic, you’re nesting three closures and getting stuck in callback hell, not to mention the possibility of missing the wrong branch.

Using Combine, we can wrap the three requests into a single Publisher and use the three results together with combineLatest.

Such an implementation brings a number of benefits.

In addition, Resso has also implemented Combine extensions to its own web library to make it easier for more people to start using Combine.

In a nutshell, the core of reactive programming is responding to future streams of events in a declarative way. In everyday development, using reactive programming wisely can simplify code logic dramatically, but abusing it in inappropriate scenarios (or even all scenarios) can leave colleagues 🤬. The common multiple nested callbacks and custom notifications are perfect for cut-and-dried scenarios.