The name and concept of the shell evolved from its Unix predecessor, Multics. Applications are invoked and executed by the system through the shell.

The general term sh refers to bsh (Bourne shell), but Bourne shell is not bash. bash is Bourne Again Shell. 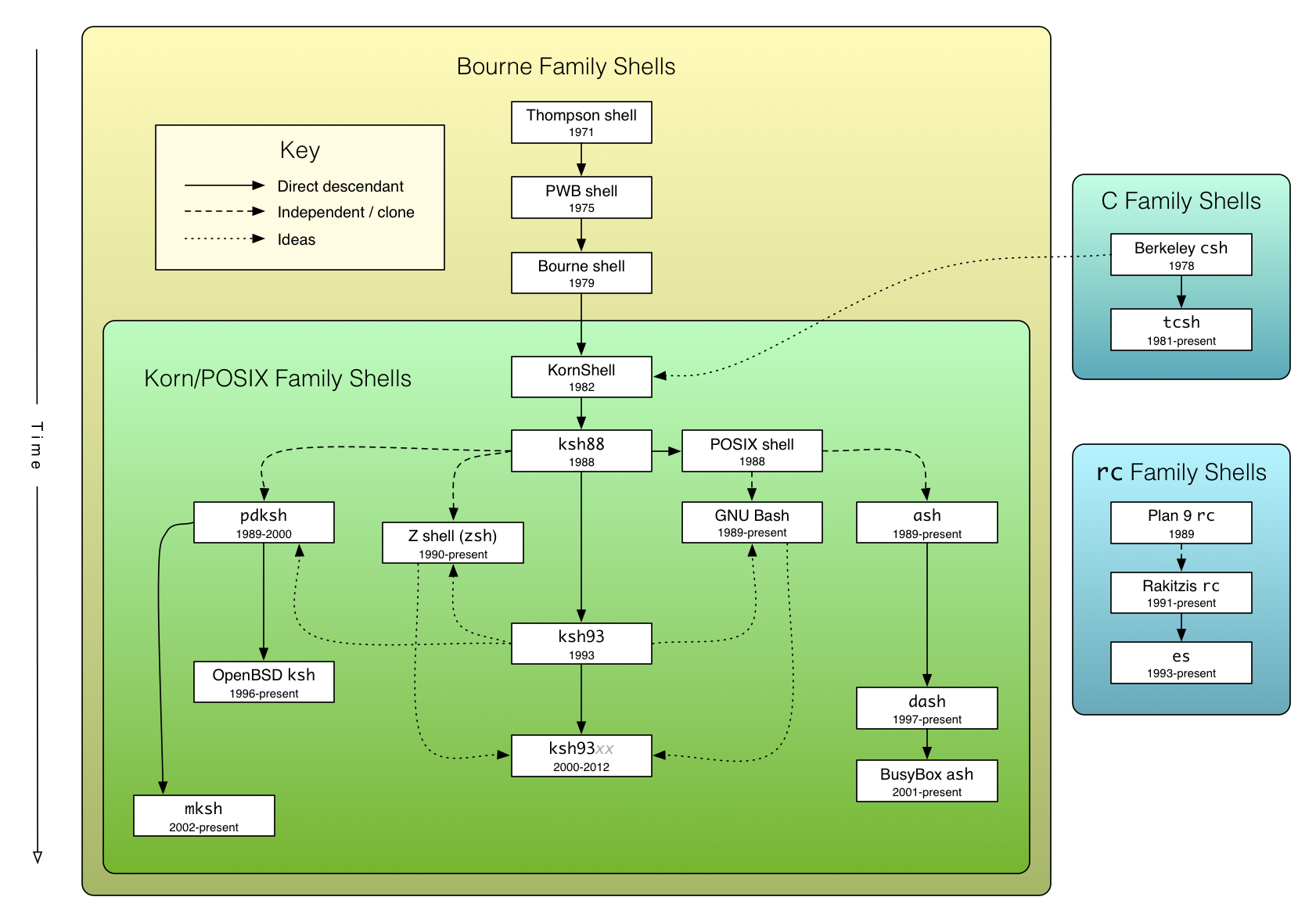 The Thompson shell (or V6 shell) was the first Unix shell in history, written by Ken Thompson and added to UNIX in 1971. It was a simple command-line interpreter, but could not be used to run shell scripts. Many of its features influenced the development of later command-line interfaces. After Unix V7, it was replaced by the Bourne shell.

At that time, the only keywords were if and goto.

Pipelines and redirects were made at that time.

These two variables were introduced to solve the hard-coding problem: $HOME , $PATH.

PHP is also designed with this in mind.

Perl is the same way.

This is still the if-then-else-endif syntax.

The Bourne shell was first publicly released as part of Unix V7 in 1979. (Almost all Unix and Unix-like systems are descendants of Unix V7).

The Bourne shell is not compatible with the Thompson shell. Then the bizarre syntax case ~ in ~ esac was born.

Here Documents was also born at this time with cat <<-EOF.

There is also the addition of the command subcommand.

Ken Thompson did not want to continue to maintain the shell, and another problem was that the Thompson shell was not sufficiently adapted to unix, and the PWB shell had difficulty solving the Thompson shell’s own problems. Or maybe the shell was just an interface for the user. Something as trivial as the web interface we see today. No one probably thought at the time that the shell would become a language or a standard.

Bill Joy developed the C shell for BSD UNIX (Berkeley Software Distribution UNIX) in 1978 while he was still a student at UC Berkeley.

The C shell’s C is derived from the c language and has a syntax closer to c, but is not compatible with the Bourne shell.

csh has made significant improvements to interactive use.

Five years after the advent of Csh, Ken Greer of Carnegie Mellon University introduced some features of the Tenex system, such as command line editing and automatic filename and command completion. Developed the Tenex C shell (tcsh)

The default shell for Mac OS X as of 10.1 puma is tcsh

tcsh is still maintained today and we can see the code on Github: tcsh-org/tcsh

KornShell (ksh) was developed by David Korn at Bell Labs in the early 1980s and released on USENIX on July 14, 1983 (about the same time as the Tenex C Shell).

KornShell is backwards compatible with the Bourne Shell and includes many of the features of the C Shell, as requested and inspired by Bell Labs users. The most notable feature is scripting support.

zsh/bash now also has these two line editing modes: the default is the emacs style

But in Apple devices, only Alt-right, Alt-lift are available for moving a word

You can also use set -o vi to switch to vi style operation, but I personally don’t use this because most of the cases are only one line, and there are too few long commands that need careful editing. The most painful part is that the vi style operation has a mode, and you can’t see the mode status, so you can only type blindly.

What we call POSIX shell compatibility today is the standard that was derived at this time.

The Almquist shell (also known as A shell, ash, and sh) is a lightweight Unix shell (the best feature is its light weight). It was originally written by Kenneth Almquist in the late 1980s. It replaced the Bourne shell in the BSD version of Unix.

There are two important branches outside the BSD world.

Embedded Linux systems, or Linux-based routing systems: BusyBox ash for OpenWRT and the like

rc (Run Commond) is the command line interpreter for Unix V10 and Plan 9 of the Bell Labs operating system. It is similar to the Bourne shell, but its syntax is slightly simpler. Developed by Tom Duff, this is not POSIX shell compatible

Bash (Bourne Again Shell) is a Unix shell and command language written by Brian Fox for the GNU project, and is a freeware replacement for the Bourne Shell. It was first released in 1989 and is used as the default login shell for most Linux distributions.

Korn Shell was originally proprietary software until 2000, when it was released as open source software (under the General Public License)

BSD Unix avoided it in favor of the C shell, and its source code was not freely available for Linux at the time of its inception. So when early Linux distributions went looking for a shell to go with their Linux kernel, they often chose GNU Bash

This early connection between Linux and Bash pretty much sealed the fate of many other shells, including ksh, csh, and tcsh, which are still used by some die-hard fans today.

Or you could say: Here String is a variant of Here Document

Paul Falstad wrote the first version of Zsh in 1990 while he was a student at Princeton University. The name zsh is derived from the name of Zhong Shao, a professor at Yale University. Paul Falstad thought that Shao’s login ID “zsh” was a good name for the shell.

There is also a theory floating around that z is the last letter of the alphabet, and that zsh means the last shell, or as of now, probably the last generation of the POSIX shell.

Zsh is compatible with Bash. This is both true and false, because Zsh itself, as a scripting language, is not compatible with Bash. A Bash-compliant script is not guaranteed to be executed correctly by the Zsh interpreter. Therefore, the Zsh implementation includes an emulation mode that supports emulation of the two major Bourne-derived shells (bash, ksh) and the C shell (support for csh is not complete).

In Bash emulation mode, you can use the same syntax and set of commands as Bash, for near complete compatibility. To use emulation of Bash, you need to explicitly execute.

On many systems, the default interactive command shell program and /bin/sh are different things. /bin/sh may be.

All this history explains why the creators of upstarts like bash, zsh, and yash (yet another shell) chose to make them compatible with sh. Bourne/POSIX compatibility is the minimum that a shell for Unix-like systems must provide in order to gain widespread adoption. This is sh-compatibles.