GitOps was first introduced by Weaveworks, a Kubernetes management company, in 2017. Now that five years have passed, I’m sure you’ve heard of the concept, but you may not know what it is or what it has to do with DevOps. In this article, we’ll help you figure it out one by one.

Before we can understand GitOps, we need to understand what Infrastructure as Code is.

For example, if you want to create servers, configure networks, deploy Kubernetes clusters and various workloads in AWS, all you need to do is define a declarative configuration for Terraform or Ansible and a configuration checklist for Kubernetes, eliminating all the tedious manual work.

On the other hand, modern application development is more concerned with iteration speed and scale, and organizations with a mature DevOps culture can deploy code to a generative environment hundreds of times a day, and DevOps teams can do this with best practices like version control, code review, and CI/CD streams for automated testing and deployment, which is what GitOps does.

In a broad sense, GitOps and DevOps are not in conflict. GitOps is a technical tool, while DevOps is a culture GitOps is a tool and framework that enables Continuous Delivery, Continuous Deployment, and Infrastructure as Code (IaC), which supports a DevOps culture.

In a narrow sense, GitOps differs from DevOps in several ways.

First, GitOps is goal-oriented. It uses Git to maintain the desired state and continuously adjust the actual state to eventually match the desired state. Whereas DevOps focuses more on best practices that can be universally applied to every process in the enterprise.

Finally, GitOps redefines CI/CD in cloud-native scenarios with Git as the central immutable state declaration to speed up continuous deployment.

To use GitOps to manage your infrastructure and applications, you need to practice the following principles.

The desired state of the system must be described declaratively. For example, Kubernetes, one of the many modern cloud-native tools that are declarative, is just one of them.

Any changes to the expected state declared in the Git repository can be applied to the system immediately, and there is no need to install and configure additional tools (like kubectl) or configure Kubernetes authentication authorization.

Reconciliation is a concept that was first introduced in Kubernetes to represent the process of ensuring that the actual state of the system matches the desired state. This is achieved by installing an agent in the target environment, which will automatically repair any mismatch between the actual state and the desired state. The repair here is more advanced than Kubernetes’ fault self-healing, where the cluster is restored to the state described by the manifest in the Git repository, even if the cluster’s orchestration manifest is manually modified.

With these design philosophies in mind, let’s look at the GitOps workflow. 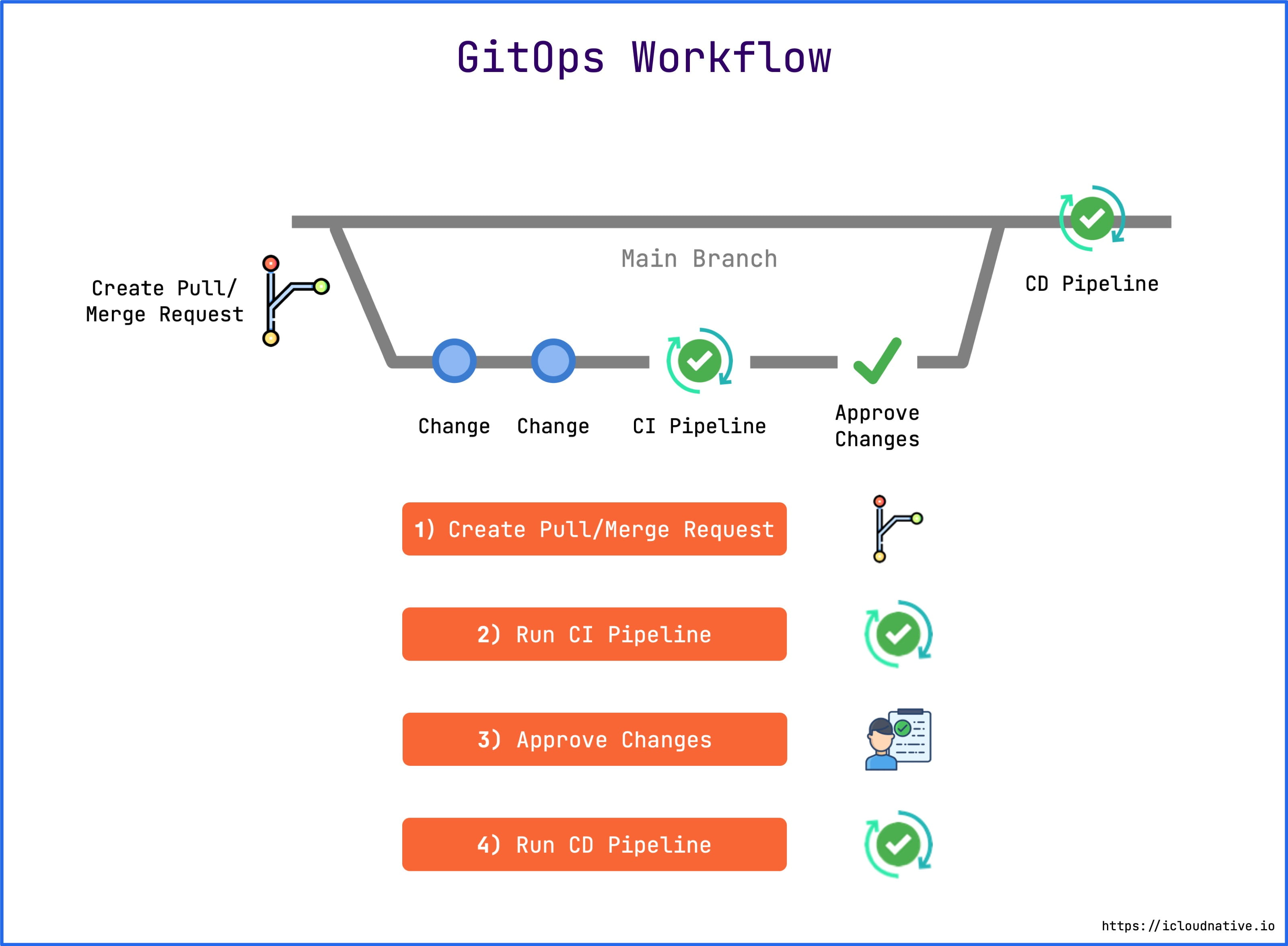 The entire process is fully automated and transparent, with multi-person collaboration and automated testing to ensure robustness of the infrastructure statement configuration. The traditional model is that one of the engineers does it all on his or her own computer, and no one else knows what’s going on or can review his or her actions.

There are two modes in the CD flowline: Push and Pull.

Most CI/CD tools today use a Push-based deployment model, such as Jenkins, CircleCI, and so on. This mode typically executes a command (such as kubectl) to deploy the application to the target environment after the CI pipeline has finished running. 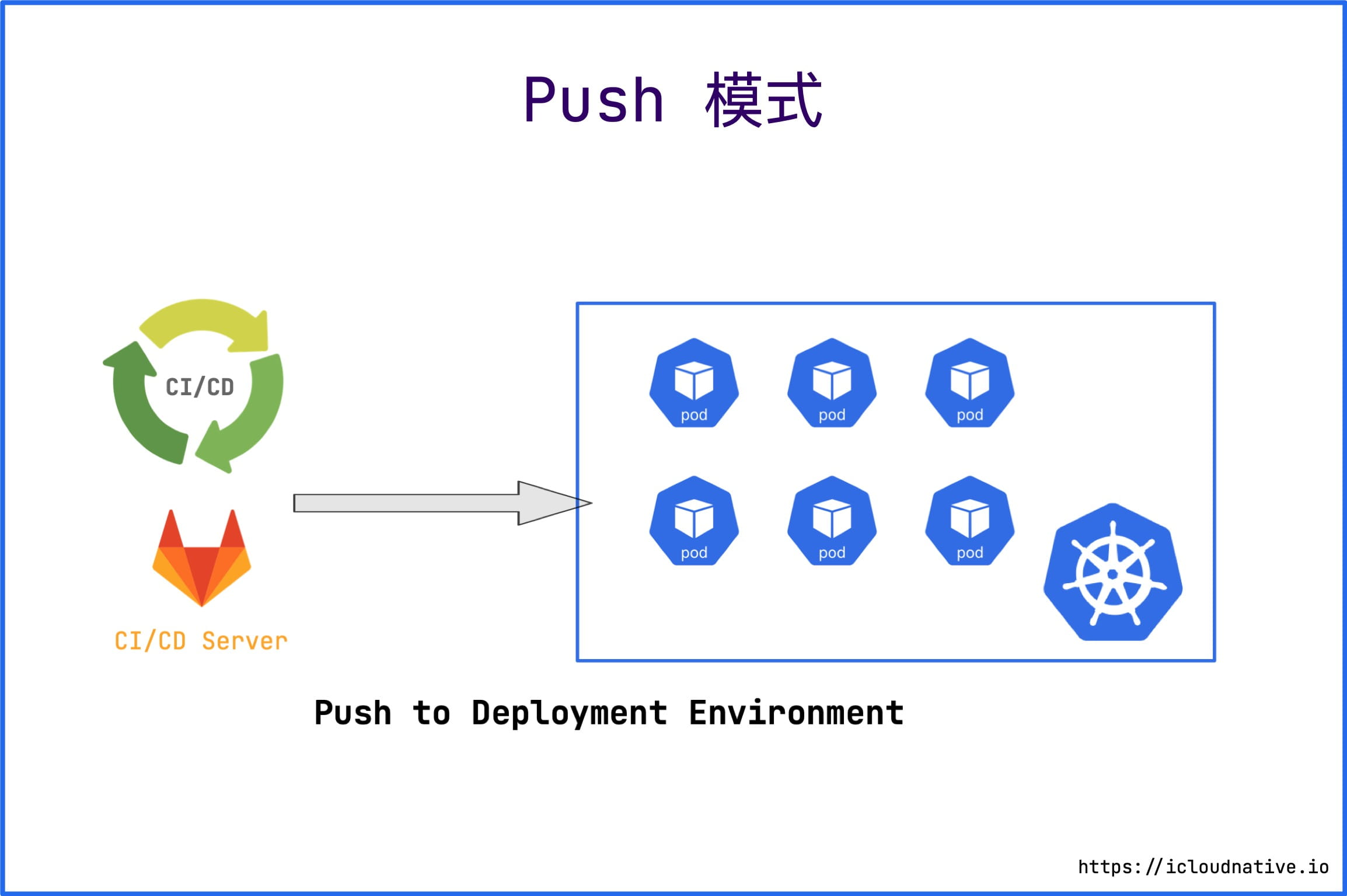 The drawbacks of the CD model are obvious. 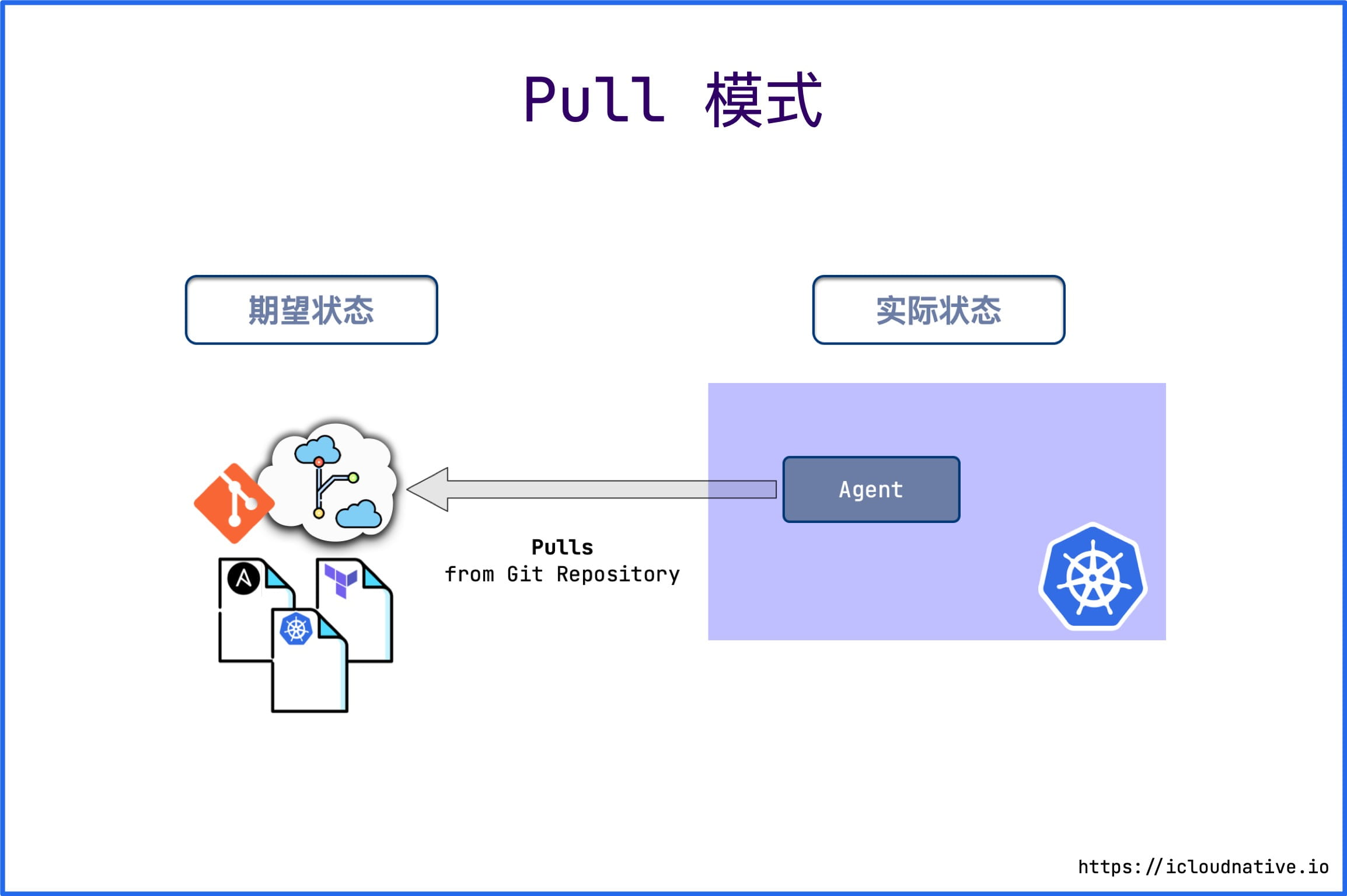 Only Git changes can be used as the only source of desired state; otherwise, no one can make any changes to the cluster, and even if you do, they will be restored to the desired state by the Operator, which is also known as immutable infrastructure.

The current CD tools based on the Pull model are Argo CD, Flux CD, and ks-devops.

GitOps generally prefers a Pull-based deployment model because it has a number of irreplaceable advantages.

As mentioned above, using GitOps does not require any Kubernetes or cloud platform credentials to perform a deployment. An Argo CD or Flux CD within a Kubernetes cluster simply accesses the Git repository and updates it via Pull mode.

Git, on the other hand, is backed by strong cryptography for tracking and managing code changes, with the ability to sign changes to prove authorship and provenance, which is key to securing your cluster.

Git as the Single Source of Truth

Because all of the declarative configuration of your application, including your infrastructure, is stored in Git, and you use Git as the only source of truth for your application, you can use the power of Git to manipulate everything, such as version control, history, auditing, rollbacks, and more, without having to use a tool like kubectl to do it.

Git is also a tool that developers are very familiar with, and by iterating through Git, you can increase productivity, speed up development and deployment, and get new products out faster, while improving the stability and reliability of your system.

Infrastructure using GitOps can be managed using Git just like any software project, so it can be audited for quality as well. When someone needs to make a change to the infrastructure, a Pull Request is created, and the change can be applied to the system only after a Code Review is performed by the appropriate people.

GitOps complements the existing DevOps culture by using a version control system like Git to automate the deployment of infrastructure, with clear visibility into the deployment process and the ability to see and track any changes made to the system, improving productivity, security, and compliance. And GitOps provides more elegant observability, allowing you to see the state of your deployment in real time and take action to keep the actual state consistent with the desired state.

And in GitOps, the entire system is described declaratively, which naturally fits into cloud-native environments because Kubernetes is designed to do the same.